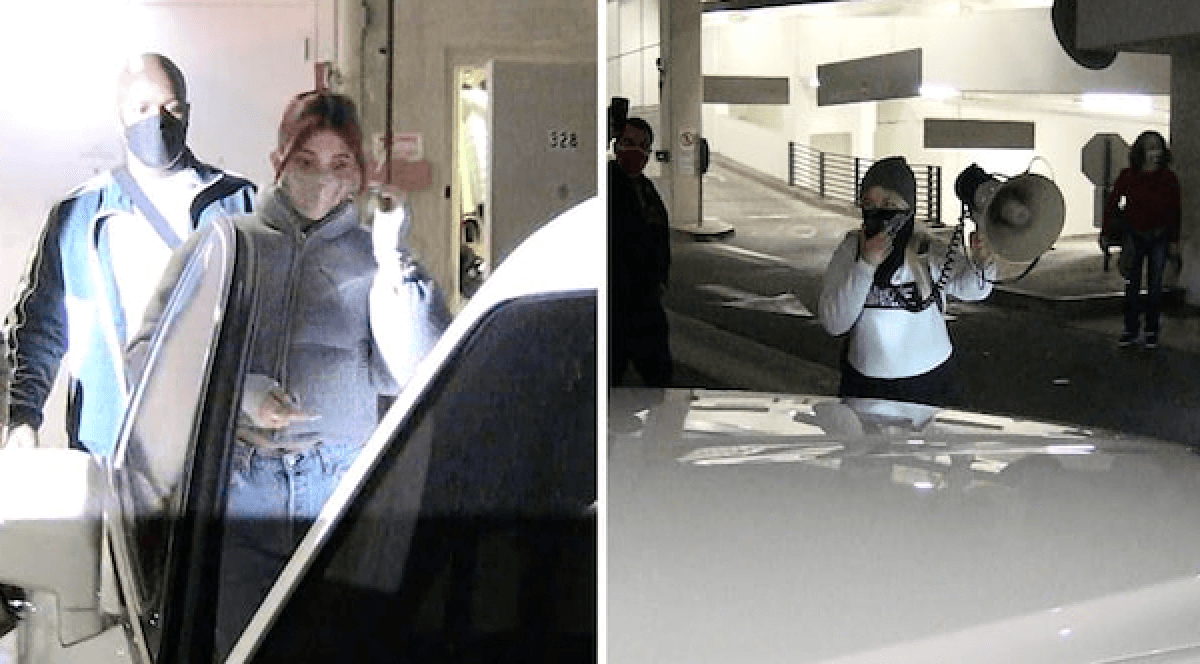 Kylie Jenner was confronted by animal rights activists on Saturday, December 19, as the reality star exited a luxury store on Rodeo Drive in Beverly Hills.

The Keeping Up With the Kardashians personality, who was wearing a mask, a gray puffer jacket, jeans, and rocking newly dyed red hair, was snapped on Saturday leaving the back exit of Montcler. Kylie and her bodyguard got into the back seat of a white Rolls Royce, as a small group of anti-fur activists swarmed the vehicle and shouted at her through megaphones. A TMZ video revealed a woman yelling—”Shame on you! You’re a monster! Shame on you for supporting the fur industry!”

Press play below to watch the video!

The protestors did not single Kylie out but shouted slogans at other pedestrians in the general shopping area. The beauty mogul, who was not wearing fur at the time, did not respond.

Kylie has been known to wear fur in the past. In January, she sparked backlash after she shared a pic of herself sporting Louis Vuitton slippers made of mink fur, after working to raise awareness about the deaths of animals killed in Australia wildfires. The youngest Kardashian/Jenner sister later donated $1 million to Australia wildfire relief efforts.

The other Kardashian women have also come face-to-face with animal rights enthusiasts over the years, over some controversial wardrobe choices. Khloé Kardashian fired back in 2014, stepping out in New York City wearing a floor-length faux fur coat branded with bright red spray-painted words— “F–k Yo Fur.” She tweeted at the time, “F–k Yo Fur!!! Fake fur all day, people!!” according to E! News.

In January, Khloé responded to an Instagram follower who slammed her Halloween costume—a Cruella de Vil ensemble. The E! reality star clapped back with the obvious—that her look was “not real fur,” adding—”But keep spreading your vile hate instead of focusing on real issues.”

“Why must people assume and attack others so quickly?” the reality star wrote. “You have some clear frustrations darling and they are completely misdirected. My advice to you would be, don’t attack people in general. But if you choose to waste your energy on attacking a complete stranger, then at least know all of your information prior. Happy 2020.”

As reported, Kylie invited backlash when she took to social media in late October to show off yet another brand new face. The reality star’s reveal stunned her fans—but not in a good way. Fans sounded off about Kylie’s latest nip and tuck—with many commenting that Kris Jenner’s youngest looks like her half-sister—specifically a “pre-facelift Khloé.”

Kylie’s ever-changing look might keep fans guessing—but her financial status is rock solid. In 2019, Forbes Magazine estimated the beauty mogul’s net worth to be one billion, making her the world’s youngest self-made billionaire at the age of 21. The publication took it back in May 2020, accusing her of forging tax documents to inflate Kylie Cosmetics revenue figures.

Keeping Up With the Kardashians returns to E! in 2021.