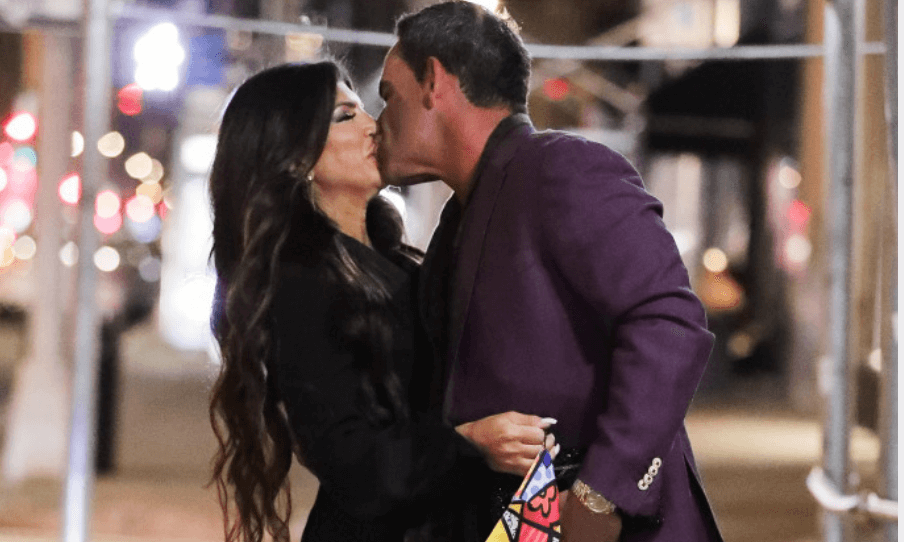 Things are heating up between Real Housewives of New Jersey star, Teresa Giudice and Louis “Louie” Ruelas. The couple has been dating for about three months and recently snapped some cozy pics at a friend’s wedding.

The duo hammed it up in a photo booth at the wedding of Lewis Decicco, hairstylist to Teresa’s RHONJ co-star and friend, Dolores Catania. The Bravo vet was wearing a back spaghetti strapped gown, and Louie was sporting a black tux and black tie. The duo popped silly poses alongside celeb hairstylist, Jenni Tips, and real estate pro, Cesar Pina.

Louie is reportedly pondering popping the question — and a source close to the situation told The Sun that the businessman tends to be impulsive.

Teresa revealed the new romance via Instagram, while the couple was at a football game. “Excited to reveal my new boyfriend,” the reality star wrote.

TMZ reported that the pair connected at the Jersey shore a few months ago, and that Louie had met Teresa’s four daughters. Teresa shares four girls —  Gia, 19, Gabriella, 16, Milania, 15, and Audriana, 11, with ex-husband, Joe Giudice. The former RHONJ dad was deported to his native Italy after serving a federal prison sentence for multiple counts of fraud.

Teresa and Joe split in December 2019 and their divorce was finalized in September, after 20 years of marriage.

Louie is the co-founder of Digital Media Solutions and launched his first business in New York at the age of 19, according to his company bio.

He is the father of two sons.

The lovebirds were spotted in New York City over the weekend, sharing a smooch on the sidewalk, after dining at 230 Fifth Rooftop Bar.

Teresa was wearing a black coat, dark pants and dark pink boots. She was seen holding hands with Louie before the pair ditched their colorful face masks for the kiss.

Page Six reported in November that the pair was taking the new relationship “very slow.”

“It’s new,” a snitch said. “They are taking things very slow. They are both happy. Right now it’s very low key and casual. One step at a time.”

Joe has hinted that he has moved on as well. He recently shared a photo of a mystery woman on social media, after revealing that he had been seeing a lawyer in Italy. Joe revealed the woman on his Instagram Stories — underneath a “what a beautiful day” caption.

“I’m actually seeing a lawyer. She’s helping me out a lot out here. You know what I mean?” Joe said during an appearance on the Wendy Williams Show, in October.

“It’s good because I got a lot of things going on out here. And she’s putting a lot of deals together for me,” Joe said on the chat show.

“We’ve been seeing each other. I wouldn’t say it’s boyfriend and girlfriend, but we’re kind of like hanging out a lot,” he added.