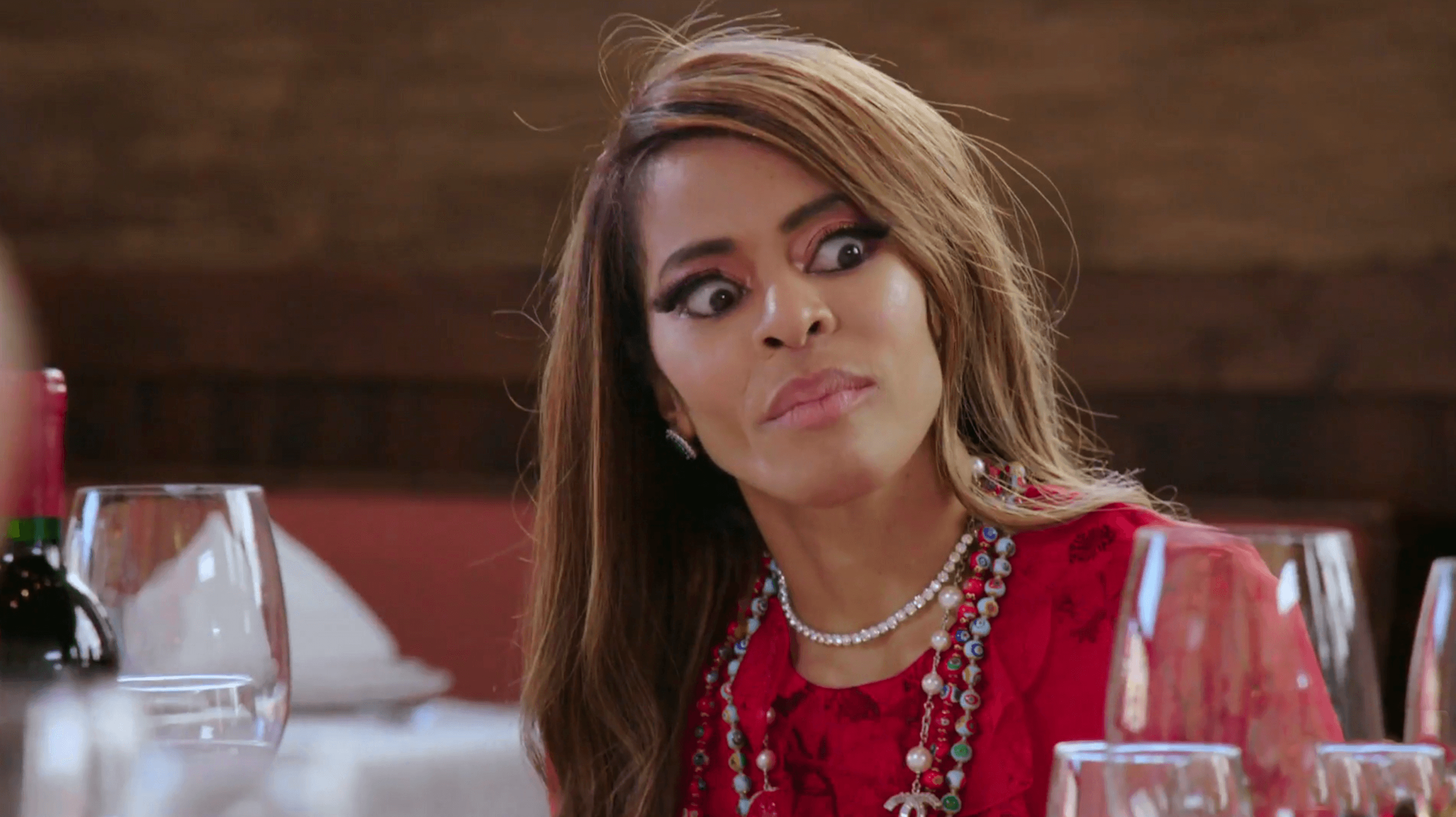 Welcome back to the Real Housewives of Salt Lake City. We’re still in the thick of Whitney Rose’s roaring 20s party. Did they make it rain on strippers in the 20s? Just curious.

The women are sitting at the same table when Jen Shah walks up and takes a seat across from her nemesis, Mary Cosby. Mary refuses to make eye contact. And Mary isn’t the only person in Jen’s crosshairs. She pulls Meredith Marks aside and questions why Meredith canceled their sleepover. (Meredith’s son disapproves of Jen and didn’t want her in the house. Meredith conceded and canceled on Jen.)

Meredith doesn’t want to talk about this drama at the party. But Jen wonders if Meredith, who went to Mary’s church recently, isn’t being negatively influenced against her. Has Mary been poisoning the waters?

Meredith assures Jen that she doesn’t listen to other people. She forms her own opinion. She’s Switzerland. And frankly, she doesn’t give a damn about Jen and Mary’s skirmish. Jen gets hotter the longer they talk. She would have Meredith’s back no matter what. Why isn’t Meredith taking Jen’s side on this?!

Meredith witnessed Jen and Mary making up. So, why is Jen still so angry? Jen says she only accepted the apology because it was Meredith’s birthday party, and she didn’t want to make a fuss.

At the group table, Whitney wonders if she should break up the discussion between Jen and Meredith. Lisa Barlow offers to handle it instead. By the time she makes her way to the other table, Meredith has had enough nonsense. As she gets up, Jen starts venting to Lisa.

Jen has had too much to drink. She’s crying and screaming that Mary fucked her grandfather, and the whole club overhears her.

The other women don’t approve of Jen’s behavior. Jen dismisses Lisa as she finishes yet another cocktail.

Whitney comes over to defuse the situation. They tell Jen they’re all friends, and that’s it. But Jen is in her cups and her feelings as she yells “fuck you” at Meredith.

Jen calls her husband to come and comfort her. But the call drops. Or he hangs up on her drunk ass. And by this time, Meredith has had enough drama and leaves the party.

Jen grabs the long train on her dress and exits the building. People follow her, call her name. She screeches for them to “shut the fuck up.” Always keeping it classy, Jen!

Heather Gray follows her to the parking lot. As Jen rages, Heather places her arm around Jen and delivers her to her car. Jen is driven off in tears.

The next day, the women discuss Jen’s behavior. They all decided that she was out of line. But they’re also scared of her and fear her wrath.

Meredith stops by a gallery and meets up with her bestie, Lisa. Meredith needs a painting for the new house. Lisa wants to touch every piece in the gallery, which is inappropriate and annoying to the woman who works there.

Meredith doesn’t want to talk about Jen and the party. She has bigger issues. Meredith finally admits that she and her husband, Seth, are separated. They hug as Lisa tears up.

Meredith and Seth have drifted apart, but they’re dating. She hopes she can salvage her marriage. Lisa is shocked to hear the news but promises to be supportive.

Next, Lisa stops by Mary’s house. The place is still decked out for Christmas, but Lisa doesn’t appreciate Mary’s sense of style. She calls her decorating “disjointed.”

Mary’s son, Robert Jr., wanders into the kitchen. He bought his girlfriend a Prada purse for Christmas. Mary’s jealous of this girl who has stolen her son’s affections away from her.

Robert Jr. has always wanted to be a brain surgeon, but now at seventeen, he’s decided he wants to become a fashion designer. This is news to Mary, and she’s not happy about it. She blames the girlfriend.

Mary and Lisa discuss Whitney’s party. Mary points out that Whitney loves her a stripper pole, whether she’s gyrating on it or someone else is, it seems to be a staple at all of Whitney’s events.

Mary likes a more intimate party. That’s why she’s throwing a small luncheon, where the women can talk out their problems. She’s basing it on the Met Gala, because you can always hammer out your differences if you’re wearing ostrich feathers, am I right?! She’s on the fence about inviting Jen.

Lisa doesn’t understand where Jen’s anger is coming from. Mary says Jen’s in competition with her.

Jen stops by Heather’s house that night. And she ordered sushi, which is a win for Heather. Jen always brings food or snacks or has them delivered.

Heather wonders what the hell happened at the party. While Heather loves Jen, she realizes the emotional outbursts aren’t normal. Jen blames them on her husband’s crazy schedule and continued absence. The anniversary of her dad’s death is coming up, too.

Jen puts on a good face, but she’s lonely. Her husband didn’t even attend her dad’s funeral. She sucked it up because he had a football game to coach.

Also, Jen is questioning Meredith’s loyalty. Heather feels that Jen is frustrated with her husband, Sharrieff, and she’s lashing out at Meredith instead. But Jen claims she threw Meredith an $85,000 birthday party to help support her through the separation with Seth.

Hold up! Jen wasn’t supposed to spill the tea about Meredith’s situation. Heather’s shocked. Jen feels she no longer owes any loyalty to Meredith and isn’t sorry about sharing the other woman’s secret.

The day of Mary’s lunch has arrived. She’s giving the party planners hell for not having things perfect. She’s handing out Louis Vuitton gifts, then snarkily asks the planners if they can read, because the girls’ names are upside down on their place settings. Yikes. Mary is passive-aggressive and mean.

Mary ultimately invites Jen, because it’s the right thing to do. But she’s strategically placed Meredith beside her. Take that, Jen!

Jen calls her husband to get the Coach Shah pep talk. She’s worried about the luncheon and her reaction to Meredith. Sharrieff tells her to control herself and not let her emotions get out of hand.

Heather and Whitney arrive together. They’re confused by the Met Gala cocktail attire theme. Every year the Met Gala theme changes and this is a luncheon, so they don’t want to go over the top with the glam.

Heather shares the news of Meredith’s separation. Whitney is rocked. She’s always asking about Seth and why he’s rarely in town, and Meredith has brushed it off.

Lisa and Meredith arrive at the restaurant. They’re impressed by the valets dressed as tacky Beefeaters and walk the red carpet to enter the building.

Heather and Whitney enter the venue next. Nothing looks like a Met Gala. The women are dressed in pants suits and dresses, but added fur jackets to spruce up their look. Beta fish are used as centerpieces on the table, and Mary offers champagne that made it through a heatwave that killed thousands of people, but made the grapes taste amazing.

Jen finally wanders in and gives Mary a hug. Jen makes the rounds and kisses everyone except Meredith. Mary encourages Jen to write in the journal she provided. She wants the women to share something about themselves with the group.

The women open their gifts to find ear pods, then Mary prays before eating. And just when we thought the prayer was done, Mary drones on and tears up, her voice wavering. Jen isn’t impressed by any of it.

It’s share time, but Mary stipulates the speaker shouldn’t be interrupted. She goes first, natch, since it’s her party.

Mary has trust issues. She’s trying to change, but it’s been hard. As for Whitney, she is working on caring less about what other people think. Still, she takes pains to point out she’s not a swinger, which is what Lisa accused her of a couple weeks ago. (So much for not caring about other’s opinions.)

Lisa shares that she has high goals for herself. And she loves that about herself!

Jen starts crying before she even speaks. She explains that her dad moved from Tonga to the USA with nothing. She felt the pressure as the oldest to be perfect. Everyone thought she was black, and she had a hard time explaining her ethnicity. She’s also passionate about her friends. And when they aren’t as loyal as she is, it hurts. She apologizes to Meredith, who accepts it. But Jen doesn’t offer an apology to Mary.

So, that’s our episode. Do you think Jen was out of control? And what do you think about Mary’s Met Gala party?