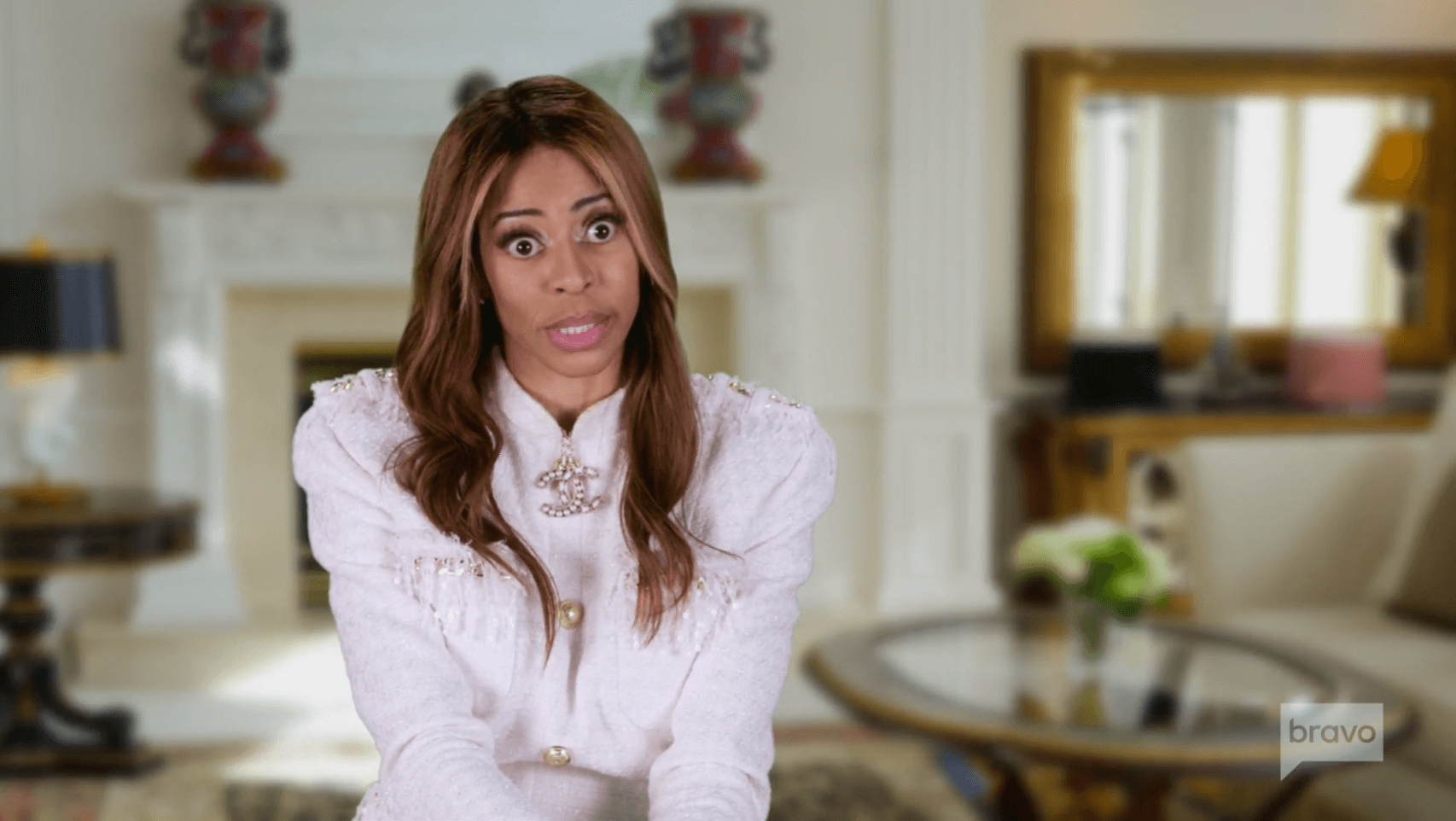 Welcome back to the Real Housewives of Salt Lake City. We open with a montage of the women going about their daily lives.

Lisa Barlow quizzes her son on the ten commandments. He throws out, “Thou Shalt Not Smoke.” Meredith Marks and her son are getting their belly fat zapped off by what looks like an amped up tens machine. Whitney Rose goes to a speakeasy to enquire about holding a party for thirty people.

Heather Gay unboxes tot-sized cars for her pregnant employees. I mean, I assume it’s for the babies, once they’re old enough to ride, and not the pregnant mothers themselves. But what do I know?! Heather tells us five of her twenty employees are all pregnant for the first time. On top of that, they’re all having boys. So, Heather’s going all out for her people by buying toy Range Rovers.

Jen Shah shows up at Heather’s wearing six-inch stilettos (in the snow, mind you). Heather wants everyone to wear white to the baby shower. She tells us that it’s not about having the perfect labor and delivery — it’s about love. A way back prophet from the Mormon church proclaimed a woman’s real work was in the home, that she was measured by how well she raised her children. Heather doesn’t agree with it, but she understands that attitude has been ingrained within all the Mormon females she knows. Heather admits when she got divorced, she felt like a failure. She chose her husband not because she loved him, but because he was Mormon. He left her after eleven years of marriage, and Heather shut down. How can she be divorced and a good Mormon? She doesn’t want to put the same pressure on her daughters. They need to find their own way without having to live up to the community’s standards.

At Meredith Marks’ house, she tries to blend some cocktails and forgets to put the lid on the blender. We’re reminded that her husband, Seth, isn’t only in Chicago for business reasons, but they’re taking a break from their marriage, as well. Now, Meredith’s daughter, Chloe is home for a break. Jen stops by. She and Meredith have something in common: absent husbands. Sure, Sharrieff lives in Salt Lake City, but being a university football coach takes up most of his time.

Jen asks if she and Meredith can do a sleepover on the night of the 20s party. She wants to drink and do high kicks. What are high kicks, Chloe asks. Jen would show her, but Meredith’s son, Brooks is in the room and she doesn’t want to flash her vagina at him. I’m sure by the sour look he’s giving the camera, he doesn’t want to see it, either. So, Jen turns on the sofa and shows how to do a sitting high kick without exposing herself. Brooks is still not amused.

Even though she’s not really showing him the goodies, he says, “Her vagina is in my face.” Brooks may be a little too sensitive? He’s shocked that his mom is all right with Jen’s behavior.

Over at Lisa’s, she takes her son, Jack, for a driving lesson. She panics at the thought of him out on his own, then steers him to the convenience store and orders him to get her a Diet Coke from inside.

Mary Cosby (the woman who married her step-grandfather) meets with Meredith for dinner. Mary is having problems with her son. Her seventeen-year-old son has been her besite. She’s taken him all over the world on trips, but now Robert has a girlfriend, and his love affair with mom is over! They discuss how children suck up all their time and the communication with their husbands is lacking. Mary says she and her husband are more like co-parenting partners. Her marriage was arranged by her grandmother. She wanted Mary to inherit her church, homes, money, and her second husband. Mary went along with it because she thought her grandmother knew what was best.

Mary says her marriage split the church and cut her off from her own mother. They went from being best friends to being completely estranged. Mary’s mother wanted the church and Robert Sr. as a husband. She was upset that Mary got it all.

Mary admits she didn’t sleep with Robert Sr. on their wedding night. (She was on her period. TMI, Mary. T. M. I.) She didn’t sleep with him for a month, but now she says it worked out for the best. Everyone’s happy. Well, except for her mom, I guess.

It’s a new day, and Meredith and Brooks make guacamole. Brooks took a gap year from college to support his mom when he realized his parents had separated. He also wanted to work on his clothing line. But since Meredith is a social butterfly, she’s got a busy schedule with her girlfriends. Still, Brooks claims he keeps his mom grounded.

He brings up his problem with Jen. Meredith apologizes for making her kids uncomfortable. When she mentions the sleepover on Saturday, Brooks puts his foot down. “That’s not happening,” he says. Besides, Chloe’s not going to be home for long, and the kids want to spend time with their mom. Meredith is fine with him dictating who can come into her home.

We finally see Mary’s house. Her husband is trying to cook, but he says one of the burners don’t work. Mary shows him otherwise. They discuss Robert Jr.’s school choice. He’s going to a school because that’s where his girlfriend is, and he’s following her like a lovesick puppy.

Mary doesn’t sound entirely happy in her marriage. She tells us that she had to get to know her husband after they got married and finally decided if she could have picked a man for herself, he would be just like Robert. But once she had Robert Jr., she drifted into mommyhood, and Robert became Robert Sr. Whatever that means.

Mary wants to send her son to a boarding school in LA. She feels he’s too distracted by his girlfriend. Also, he’s too smart for the school he’s currently attending. She calls him into the kitchen. She tries to talk him into going to the boarding school. He doesn’t want to be lonely in LA. Besides, he’ll miss his girlfriend. Mary is insistent that he go away.

Neither Whitney nor her father, Steve, have darkened the door of a church in at least a decade. Whitney because she was excommunicated for adultery. Her father because he’s an opiate addict. Everyone in the church and his family turned their back on him. Whitney is the only person who stood by him. But he’s been in a thirty-day rehab and is considering a sober living facility. Now, they’re at Mary’s church, hoping for some solace.

Mary Cosby comes up the aisle, takes the microphone, and starts to preach. Meredith is Jewish, so she’s not used to a Pentecostal service, but she’s enjoying herself. Mary steps down and prays with Whitney and her dad. Steve’s eyes fill with tears, and Whitney says he hasn’t had this kind of acceptance in years.

At Jen’s chateau, she’s getting ready for the 20s party a day early. She has to try her hair and makeup before the big night. She calls her team the Shah Squad. She depends on them, since her husband is gone so often.

Jen is upset that Meredith canceled the sleepover. She complains to her squad, and of course, they agree with her. Mostly because they’re paid to.

The night of the multiple baby shower has arrived. Heather worries her employees have misconceptions about motherhood. She thinks they all want the Instagram perfect life, but that’s just not attainable. Which is strange, considering in the very first episode, Heather told us perfection is the goal. That’s why she has a day spa. Heather seems a bit confused.

Whitney arrives. Jen comes in next, with sandals that lace up her legs, from ankle to thigh, disappearing beneath the hem of her short white skirt. It’s a look, all right.

As the pregnant women and their husbands are forced to play games, Jen, Whitney, and Heather slip off to have a drink in private.

Whitney talks about her upcoming party. Jen is upset that Whitney invited Mary. Mary has apologized to Jen, and Jen accepted it. But it’s obvious she’s still feeling some kind of way toward Mary. When Whitney talks about how well her dad was received at Mary’s church, and that Meredith was there, too, Jen gets hot.

Jen thinks Meredith should shun Mary and be loyal only to her. She complains that Meredith is acting like Switzerland, and that’s not a true friend. Jen takes this as a personal jab by Meredith.

The night of the party is here. And then we see Whitney’s new talking head look. Oh, kids. It’s not good. She’s got a Marilyn Monroe vibe going, complete with a bad platinum wig and one boob about ready to pop out and poke me in the eyeball. I do not approve!

Everyone gets into the spirit of the party. Everyone except Meredith, who wears a black pantsuit with flared trousers. She claims it’s her own take on the theme. That’s cheating!

Jen shows up, and she’s been pregaming. When she sees Meredith talking to Mary, she about loses her shit. And that’s our episode.

So, do you think Meredith should take sides? Was Brooks out of line for telling his mom her friend isn’t welcomed in her home?