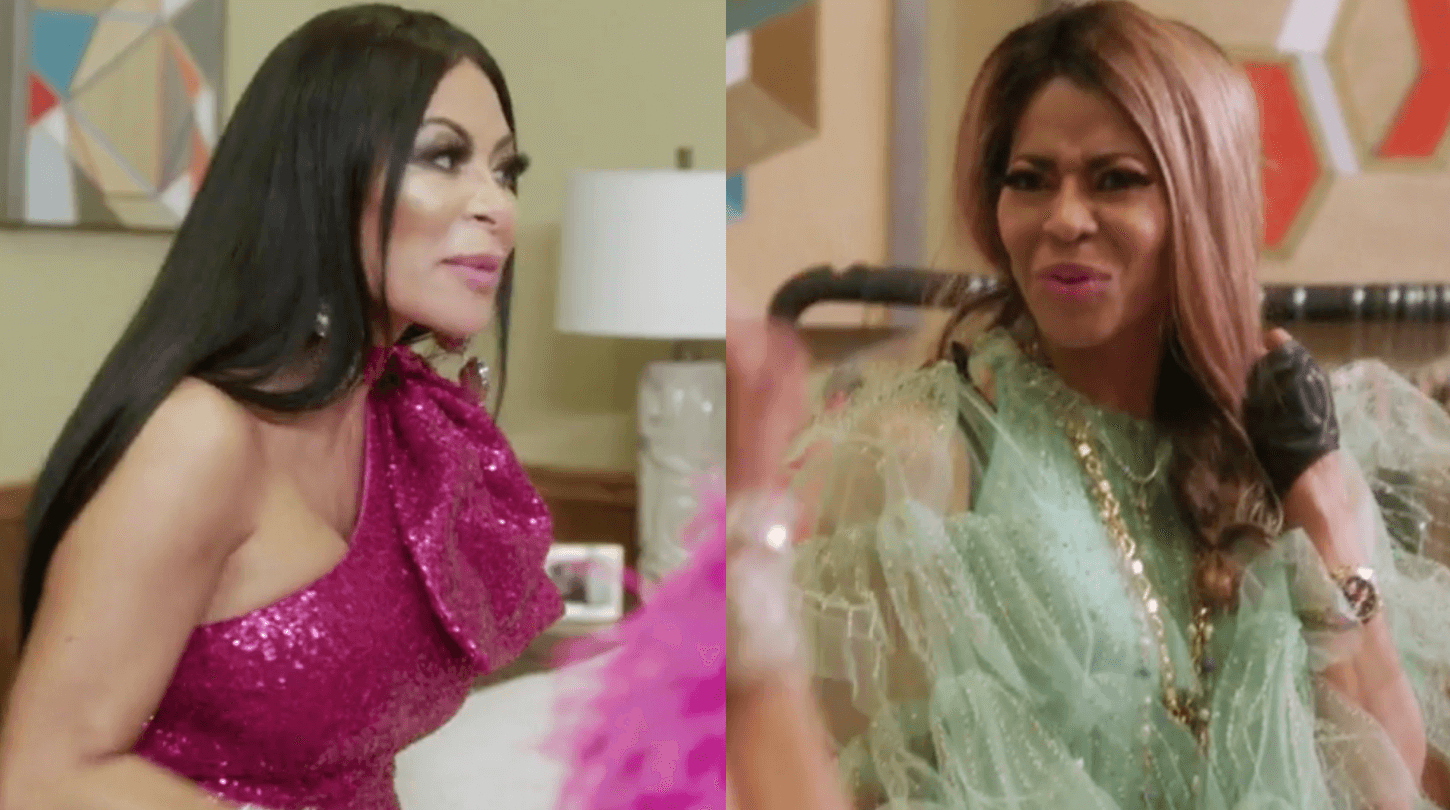 We begin the Real Housewives of Salt Lake City at Jen Shah’s birthday party for Meredith Marks. Jen is upset that her former friend, Mary Crosby, said she smelled like a hospital right after Jen had visited her aunt. An aunt who had both legs amputated. Jen and Mary speak for the first time in months, but Mary refuses to apologize. Jen stalks to the bathroom and vents to her hairstylist.

Heather Gay goes in to comfort Jen. But Heather thinks the whole thing is stupid. Why are these women still fighting about this? (Psst. This is a Housewives show, Heather. Get with the program!)

As Jen carries on about how small her circle is and how Mary should be grateful, Mary herself walks into the room. Heather invites the ladies to talk it out.

They leave the bathroom and settle in the bedroom. Once more, Mary tells the women that she had her odor glands removed. (Seriously? Is that a thing? I thought only skunks had odor glands. But then, I barely passed Biology 101, so…) Mary was in the hospital for thirty days, had twelve surgeries, and almost died on the operating table. So, you see how the hospital smell was devastating for her? No? Well, that’s because you’re a normal human being. Congratulations.

At the party, Meredith plops down next to Whitney Rose. Whitney spills all the tea about Jen flouncing out of the party, upset, and Mary following her. Now, Meredith goes searching for Jen.

Meanwhile, Jen is trying to tell Mary that she’d been through a harrowing day, and the hospital comment was tacky and out of line. Meredith steps in and begs the women to come and have fun. As Jen and Mary continue to argue, Meredith tells them this is not the time to get into it.

Mary finally apologizes, and they hug it out. Jen tells us she’ll accept it, but it was a disingenuous and half-assed apology.

Lisa Barlow finds Whitney and asks about her vow renewal from last week. Lisa provided her own VIDA tequila and bartenders for the reception. But Whitney lets Lisa know that she hired the bartenders to serve her guests, not each other. The bartenders got drunk, and Whitney wasn’t amused.

We see a flashback of the reception. The bar was wrecked at the end of the night. Glass had shattered all over the floor, but the bartenders never bothered to sweep it up. Irish whiskey that Whitney’s husband had been saving was opened. Top shelf tequila was used. Lisa points out that her tequila is top shelf, bitch! Furthermore, she donated the booze to Whitney’s party, so why is Whitney complaining?

Whitney says they ran out of VIDA tequila at six p.m. Lisa is shocked! She sent enough booze for five hundred people. Lisa believes Whitney is shitting on the gift she so graciously provided. Whitney just thinks Lisa needs to have a better handle on her people.

Whitney realizes she’s opened a whole can of worms where Lisa is concerned. For her part, Lisa slinks over to Meredith and says she wants to go home. She’s pissed that Whitney isn’t more appreciative.

After the party, Jen’s employees return her house to a home, and she tries to hide the bottles before her husband gets back from work. She tells Coach Shah it was a small party, just the girls. He knows she’s lying and thinks it’s cute.

It’s a new day, and Whitney is swinging from her stripper pole located in the gym. Her young daughter looks on in awe.

At Heather’s, she’s trying on new ski clothes. She facetimes with Meredith. Together, they make plans to get the girls together for a little skiing.

Over at Lisa’s, she and her husband discuss their liquor business. Then she tells her husband she’s still pissed at Whitney. How dare Whitney come for Lisa’s business? And as someone who supplied the booze and mixers, why wasn’t she even invited to the vow renewal? Lisa rants, while her husband calmly listens.

Though Lisa just spent the past several minutes complaining about Whitney, she insists that they’re good. Whitney texted after the party, and Lisa called her and got a few things off her chest. Now, they’re okay. Really!

Heather goes to the ski shop for new boots, and Whitney meets her. Heather insists that certain boots will age her. Guys will see her on the slopes and know she’s over forty. No thank you! Only millennial ski boots for her.

As Ryan, the ski shop worker, goes to wax Whitney’s snowboard, the ladies talk about the party. Heather says it wasn’t a fun experience. She’s known Lisa since they attended college together, but Lisa brushed by Heather, barely acknowledging her. So, why did Heather invite Lisa to the ski day? Because Heather wants to be inclusive.

Whitney shares her own frustrations with Lisa. During their phone conversation, Lisa warned Whitney not to come after her business, then threatened to spill rumors she’s heard about Whitney if she didn’t back off. Lisa accuses Whitney of being a swinger. Polygamy may be illegal, but Whitney tells us wife swapping is still in vogue, though she doesn’t partake in it herself.

Whitney was raised to be the perfect Mormon girl. But inside, she was unhappy following all the rules. She broke them in a big way by cheating on her ex with her current husband and was excommunicated for it. People still view her as a homewrecker, even though she’s been married for ten years.

Now at home, Whitney makes grilled cheese sandwiches for her two kids as she waits for her dad to show up. Whitney and her dad have always been close. He was a cheer dad and at all her dance recitals. But because her father has been addicted to pain killers for the last decade, their relationship isn’t as tight as it once was.

A self-made millionaire, Steve owned salons and a hair school. He even had his own line of hair care. But now it’s all gone, and he’s starting over at age sixty-three.

Whitney’s parents divorced when she was sixteen, and her dad turned to opiates to self-medicate. She discovered his addiction six years ago. Whitney has been the only family member who’s stood by him. He’s sober now, and she’s glad she supported him through it.

Meredith’s husband, Seth, is in town from Chicago. They go to dinner, and as she stares at him from across the table, he tells her he’s glad to get some eye contact from her. Usually, she’s glued to her phone.

Then Seth drops a bomb. He and Meredith are separated. He wants to know if she believed their marriage would last. She hopes it will. But after too many moves, starting their own businesses, raising kids, and no communication, their relationship is on the rocks.

Seth claims he’s transparent, but Meredith says he’s not. He takes his phone and tries to hand it to her, telling her to go through all his messages. That’s not the type of transparency she’s talking about. And she never offers to show him her phone, so he thinks she’s hiding something. No, Meredith just wants some privacy. Seth wants a partnership and says he’s not dating anyone. When he tells Meredith he hopes she’s not seeing anyone either, she remains tight-lipped, neither affirming nor denying.

Ski day has finally arrived. The women haul their ski gear to the resort. Mary is late because she had to wait for FedEx to deliver her ski coat.

Jen shows up in leopard print from head to toe. She’s polite to Mary, but all is clearly not forgiven.

Whitney and Heather tear up the slopes, but Lisa, Jen, and Mary take to the bunny slope.

Though Whitney and Lisa have known each other for years now, they have trouble communicating. One or the other always comes away from an encounter with hurt feelings. Whitney asks Meredith how to better approach Lisa.

Meredith thinks Lisa acts as a big sister to Whitney. Whitney feels that Lisa is being condescending, but Meredith assures her it’s just because Lisa cares. She urges Whitney to talk to Lisa. Meredith says Lisa has always been kind and caring. She’s never known Lisa to make threats. (Famous last words, Meredith!)

After skiing, the women spend almost four hours getting ready for dinner. When they arrive, the restaurant is empty. They order cocktails, and Lisa tells the ladies she took it slow and easy on the hills because she has to be in fighting shape for the upcoming Sundance Festival. Heather just rolls her eyes.

Whitney announces to the table that she and her dad plan to attend Mary’s church soon. She says her dad is thinking about going back to the Mormon church. She’s been supporting him not only emotionally, but financially.

Lisa pipes in. As a convert, the Mormon church has been very welcoming to her. The social side of the religion may have been tough on her dad, but that’s not the church’s tenant. Whitney sees the church as very judgey.

Lisa urges Whitney to be more direct, so Whitney says she feels that Lisa judges her. Lisa denies it. Whitney admits she felt threatened by Lisa during their last phone conversation. Lisa never threatens anyone. This is Whitney’s issue!

Meredith thought Whitney would talk to Lisa privately. Not in front of all the women. This is a disaster!

Lisa insists she’s just the messenger. She’s heard rumors. She’s warning Whitney what others are saying. She doesn’t care enough about Whitney to judge her. Ouch!

Heather now puts in her two cents. She says Lisa may claim she’s full of love and kindness, but that hasn’t been Heather’s experience.

Lisa insists her intent is always good. She doesn’t care how the other women perceive her. She’s busy. If she comes off as dismissive, that’s everyone else’s problem.

Oh, really? Telling Jen that Heather flashed her boobs to everyone in college was coming from a place of love and kindness? Heather calls bullshit. Heather insists she would have been kicked out of BYU had she shown her girls to anyone!

Lisa now tries to gaslight Heather. She swears she’s never been unkind to Heather, and until Heather figures out why she’s triggered by Lisa, they can’t move forward. She then gives Heather a double thumbs up and says, “F*ck you.”

Lisa claims she and Heather texted the day of Jen’s party. Heather sent her a thumbs up emoji, and Lisa thinks Heather meant it as a “fuck you”. Heather disagrees. Two thumbs up emoji is the universal “f*ck you” code. Get it right, Lisa!

In her talking head interview, Heather admits to the producer she knew it was a fuck you, and she meant it. Lisa says Heather has a lot of pent up anger. After Meredith’s prompting, Lisa finally apologizes—hostilely. Then she shuts down the convo. And that’s our episode.

So, are you enjoying this new city? Lisa is definitely getting the villainous edit. Does she deserve it?