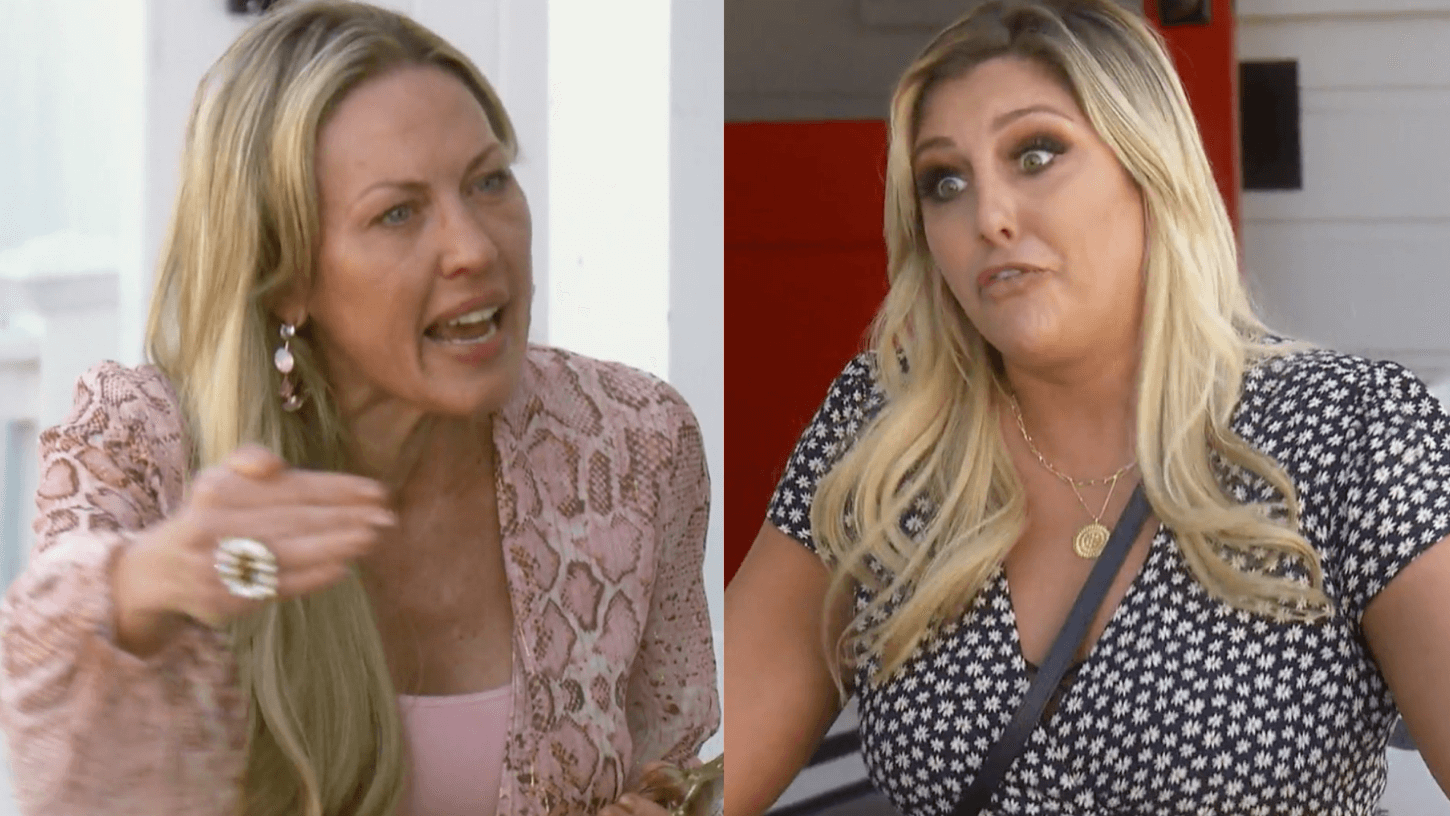 On the Real Housewives of Orange County, we pick right up where we left off last week—at Shannon Beador’s housewarming party. You’ll remember that Braunwyn Windham-Burke has been clean for thirty days. When Gina Kirschenheiter confronts Braunwyn for being a messy drunk, Braunwyn screams that she’s now sober, throws her (alcohol-free) drink in the pool, and runs out of the house. And that leads us to the opening of this episode.

As Braunwyn flees, Elizabeth Lyn Vargas stares down into the pool and tells Shannon she’s going to have to drain the water. (Elizabeth. Pay attention. This is called a cast fight. Pick a side and start arguing!) Sean, Braunwyn’s husband, confronts Gina, saying she’s rude and inappropriate. But Gina counters that Braunwyn has been attacking her for weeks. She dismisses Sean and tells him to go get his wife, turning her back on him.

Meanwhile, Braunwyn stands in Shannon’s driveway and signals for the son of Shannon’s boyfriend, whom she calls “lemonade boy”, to go back and get her husband.

Out back, Sean turns to Elizabeth and explains this isn’t how Braunwyn wanted the news of her sobriety to come out. But Elizabeth says now that the Housewives know that Braunwyn is an alcoholic, they can all support her.

Emily Simpson, Kelly Dodd, Gina, and Shannon huddle together and stare at the glass sitting on the bottom of the pool. Gina, who suffered from domestic abuse with her ex, is shaking like a, well, like a sloppy chihuahua. When a man gets in her face and tries to school her, she gets anxious. 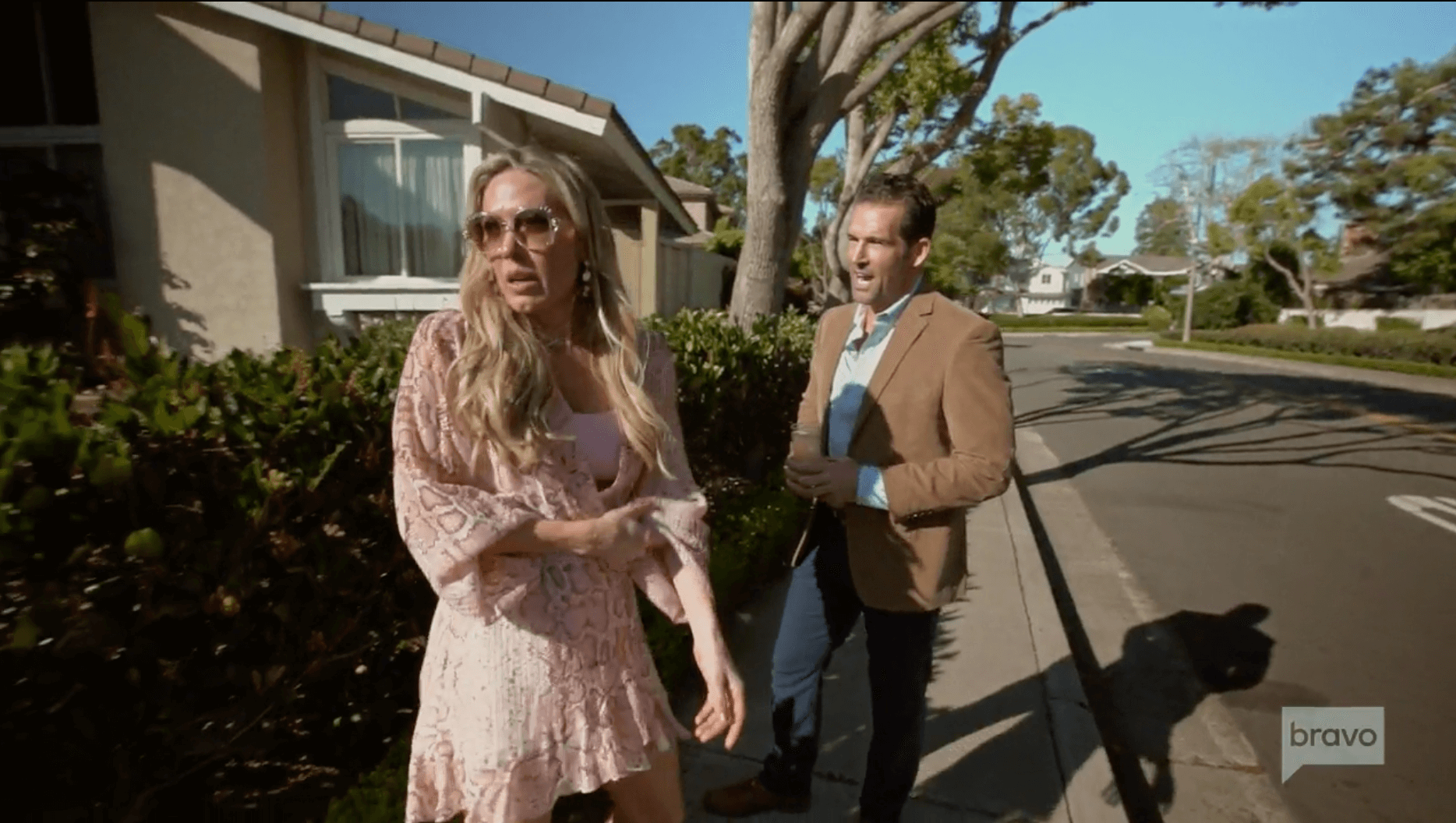 Sean, drink in hand, runs after Braunwyn who is jogging down the sidewalk. He tells her that she had one simple job: to pull Gina aside and speak to her one-on-one. Braunwyn starts screaming about the truth. Sean tells her to go back and talk to Gina. He’ll support her while the women are trying to railroad her!

Shannon’s daughter, Sophie, says Braunwyn referred to Joe as “lemonade boy” and Shannon is pissed. How dare Braunwyn insult John’s son in such a way? The kid has a name! But sadly, no nametag.

Sean marches back to Gina and asks if Braunwyn can have a private convo with her. He says Braunwyn’s too uncomfortable to come back inside. Gina relents and heads to the front porch, where Braunwyn is now surrounded by Emily, Elizabeth, and another woman. 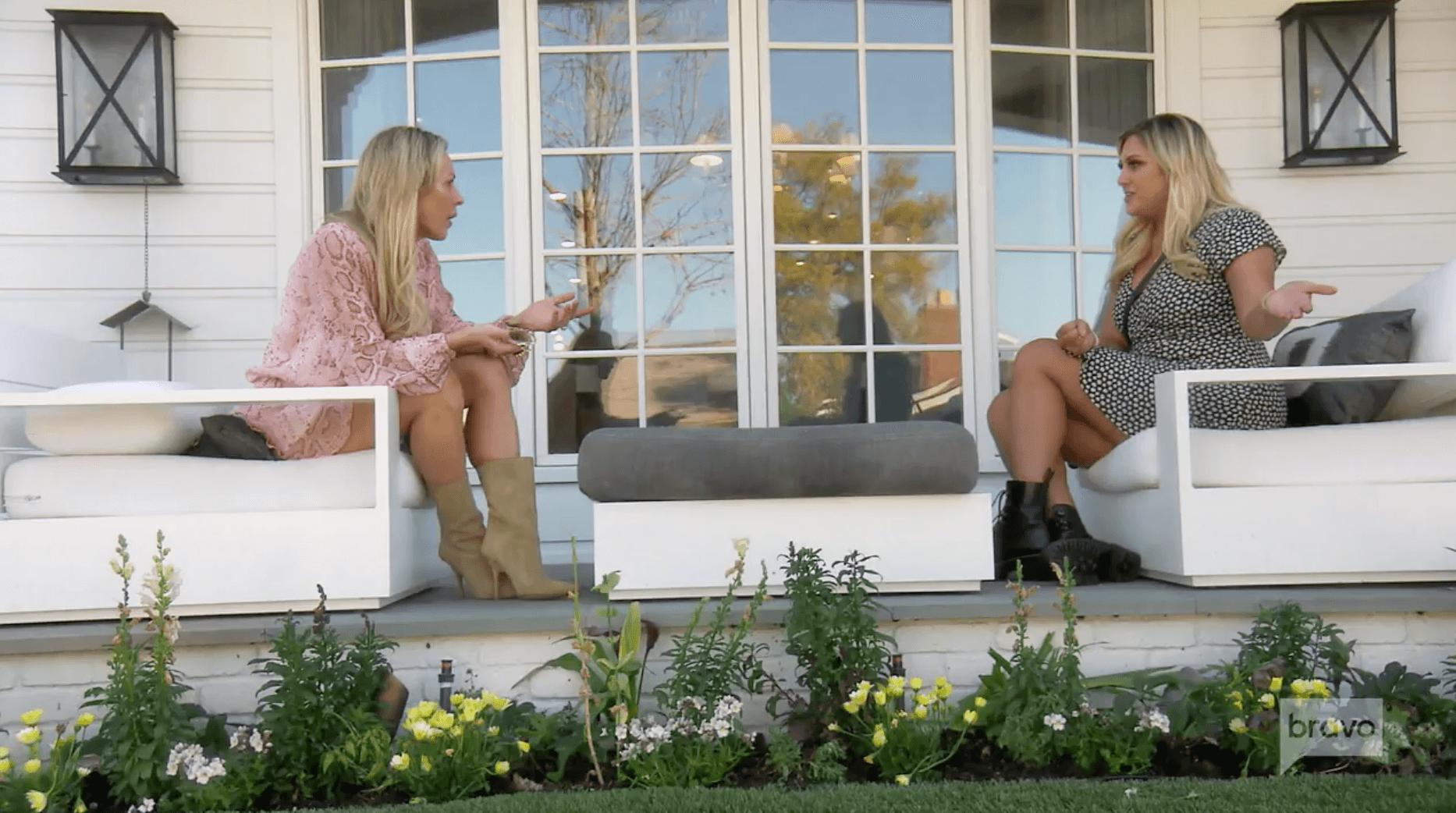 Braunwyn doesn’t understand why Gina would show the text to the other women. Gina only showed it to her best friend, Tamra Judge. (Since when are Tamra and Gina besties? Ew!) Gina feels skeeved out by the whole situation. Braunwyn yells that Sean was simply being kind.

Gina gives up and heads back inside. While she’s proud of Braunwyn for grabbing hold of sobriety, she’s still pissed that Braunwyn has been talking about her behind her back for weeks.

Braunwyn wanders back into the house as the other women squeal about doing tequila shots. She pulls Kelly inside to talk. They plop down on Shannon’s couch, and Braunwyn admits she’s sober, but wants a drink more than anything. Kelly laughingly offers her a sip of tequila.

Braunwyn says she hid a bottle of tequila in the closet, so Sean wouldn’t know she’d been drinking. Kelly questions how Sean couldn’t know Braunwyn was drunk. He’d smell it on her, no? They both agree Sean is an enabler.

Outside, a tequila-lubricated Emily tells Shannon they should be friends. She wants to get to know Shannon better and cheer her on. Shannon says she wants the same thing. (Sure, now that she doesn’t have her other two amigas to cling to.) 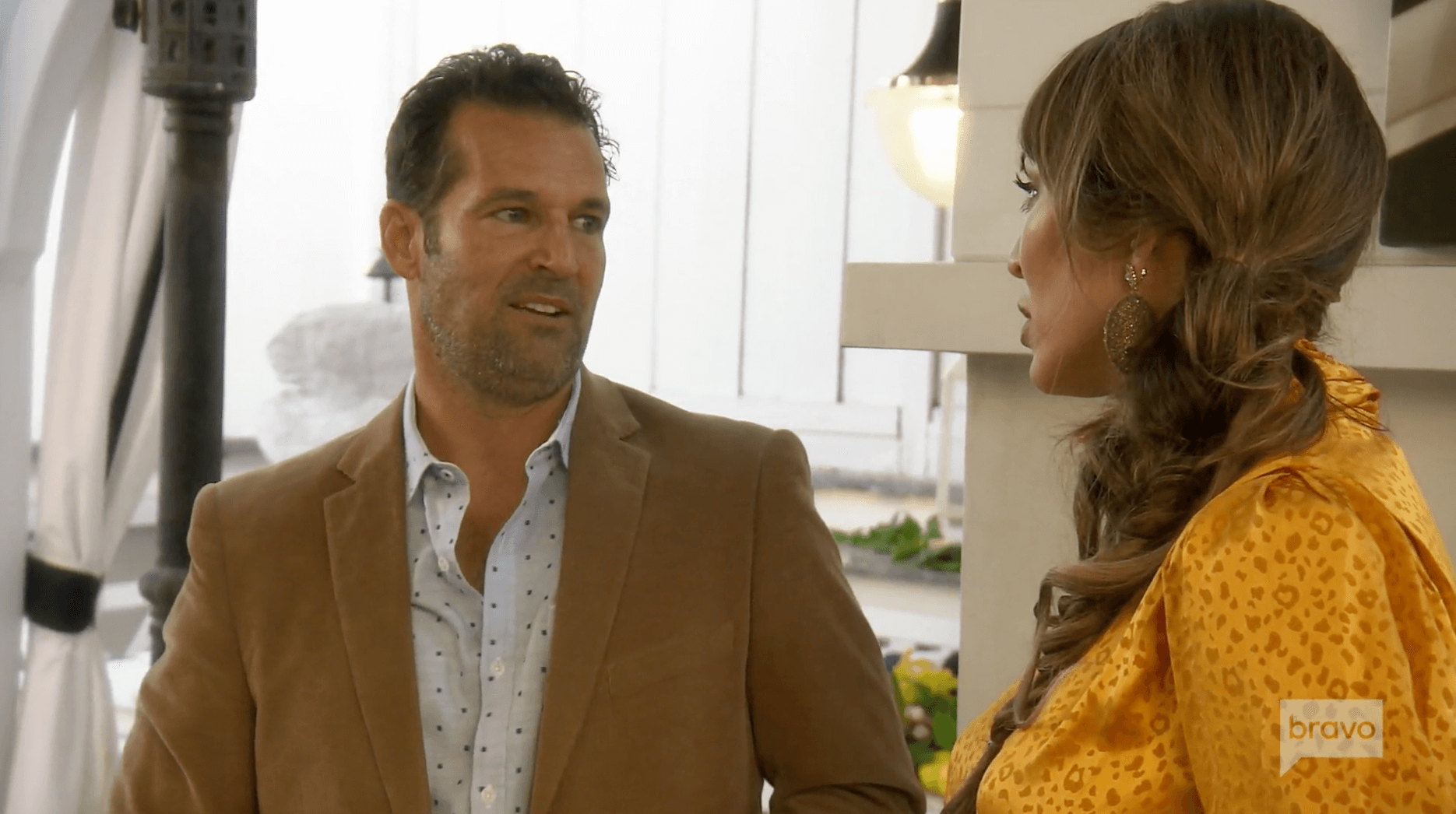 Kelly goes and fetches Sean, telling him his wife is ready to leave. She asks if Shannon really said Gina’s house was small and sad. According to Sean, it’s true.

Kelly tells the women Sean cosigned Braunwyn’s accusation. By now, Shannon’s had enough. This is supposed to be her big day, damn it! Everyone should have been congratulating Shannon on her new rental, not accusing her of talking shit about Gina’s small, sad townhouse!

As Braunwyn and Sean walk home (they live down the street from Shannon now) she says she didn’t think the party would be so hard. And she really thought Gina would take accountability for the text rumors.

As soon as she gets home, Braunwyn rehashes the story for her daughter, Rowan. Braunwyn says she now feels everything because the booze doesn’t dull her emotions.

She hops on the treadmill, still crying, and wonders when it’s supposed to get easier. She feels like she’s going crazy. Then there’s the humiliating way she acted at the party. How can she face her friends again? She asks Sean to attend an open meeting with her, and he agrees.

Back at the party, Shannon’s dad, Gene, hits on Kelly. But it’s all in fun. He’s here with his girlfriend, Diane. Kelly wants to know if Big Daddy can still get a hard-on. He says the lights still work. Kelly has an older fiancé, so she wants reassurance that he’ll be able to get it up in thirty years. #Goals 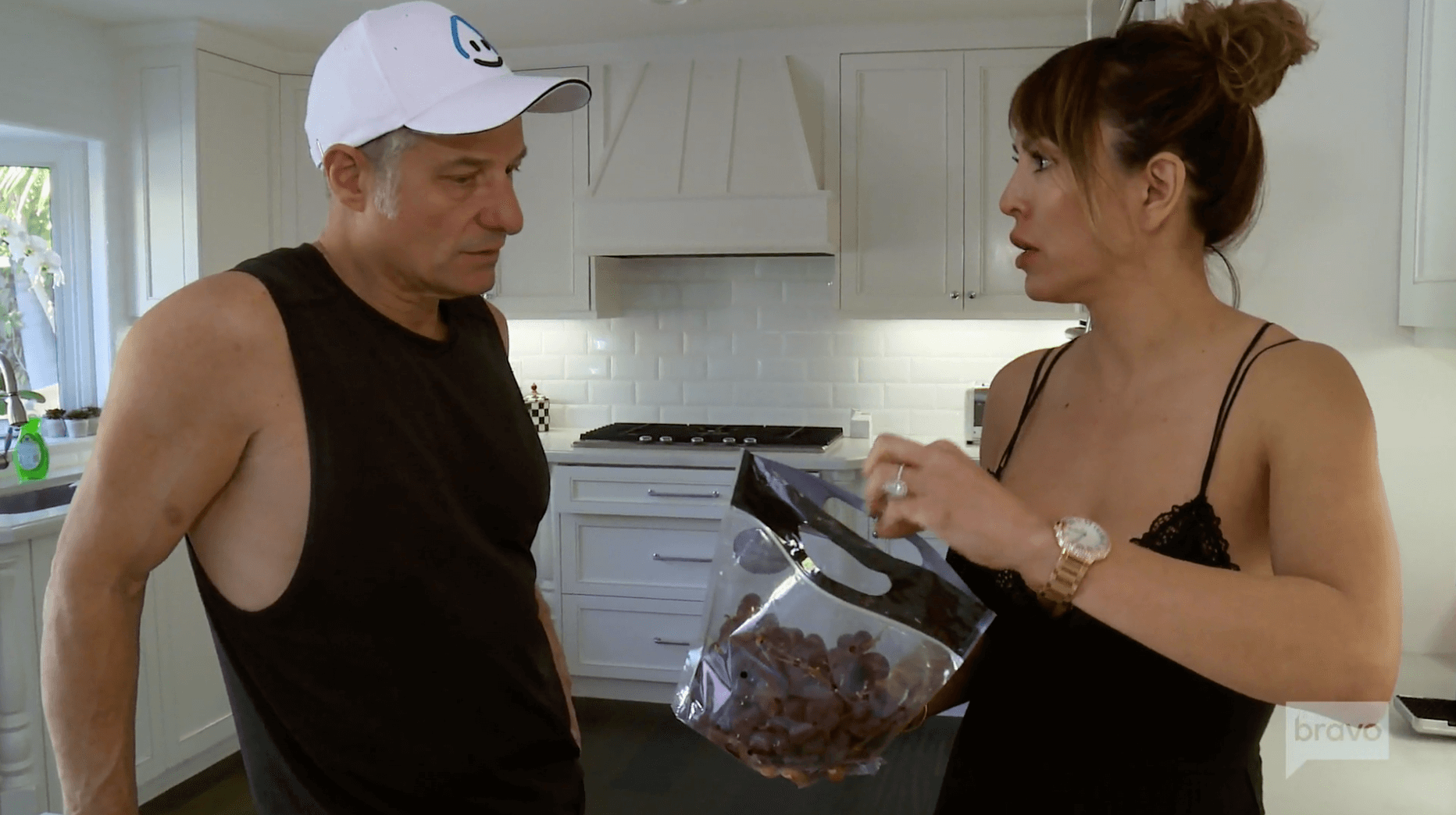 It’s a new day in the OC, and Rick Leventhal is in town. He plans on moving stakes from NY to Orange County soon. Kelly tells us (for the millionth time) that the sex is addictive. But what she really likes is that when she asks Rick to do something, like wash grapes or wipe the floor, he’s on it immediately. Kelly, girl, you know you can get an assistant who will do that, too.

Over at Gina’s small and sad house, we find out that Matt is dating a woman who has a child who attends the same school as Gina’s kids. That shouldn’t be awkward on parent-teacher night! But at least Matt has stopped obsessing about Gina.

As she slaps on makeup, Gina calls Matt. She issues an invite to her daughter’s birthday party, and he can even bring his new girlfriend. This is what co-parenting looks like! 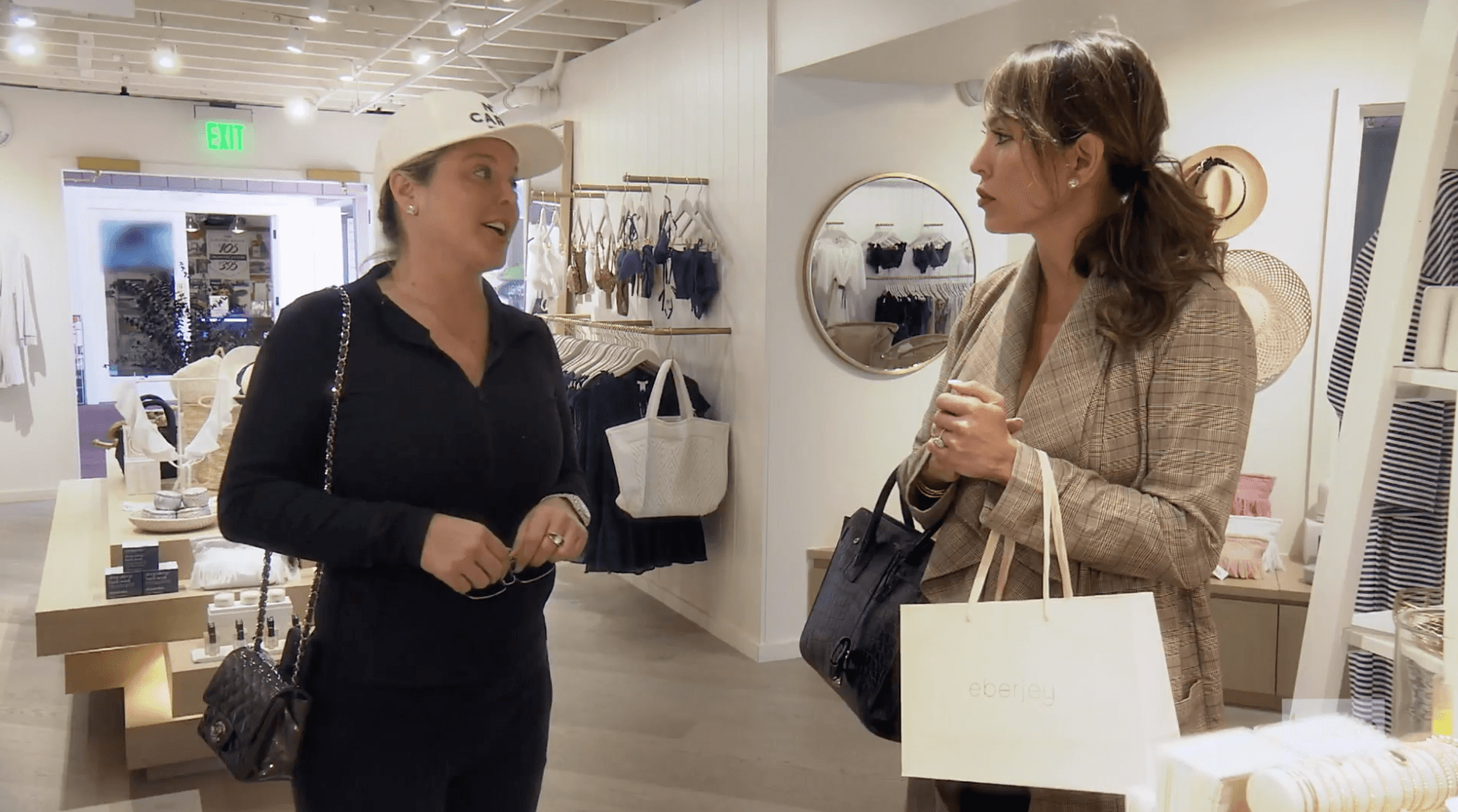 Next up, Kelly and Elizabeth go shopping. Elizabeth, who has a gag order regarding her divorce, says she’s really stressed about the upcoming trial. And though she can’t mention numbers, she’s going to get a pot of gold at the end of her divorce rainbow. Kelly thinks Elizabeth should just settle out of court. But Elizabeth sacrificed for her marriage, and she needs to be compensated!

At Gina’s house, Emily stops by. Emily’s excited that she and Shannon got along so well, she was included in a group text. That’s huge! 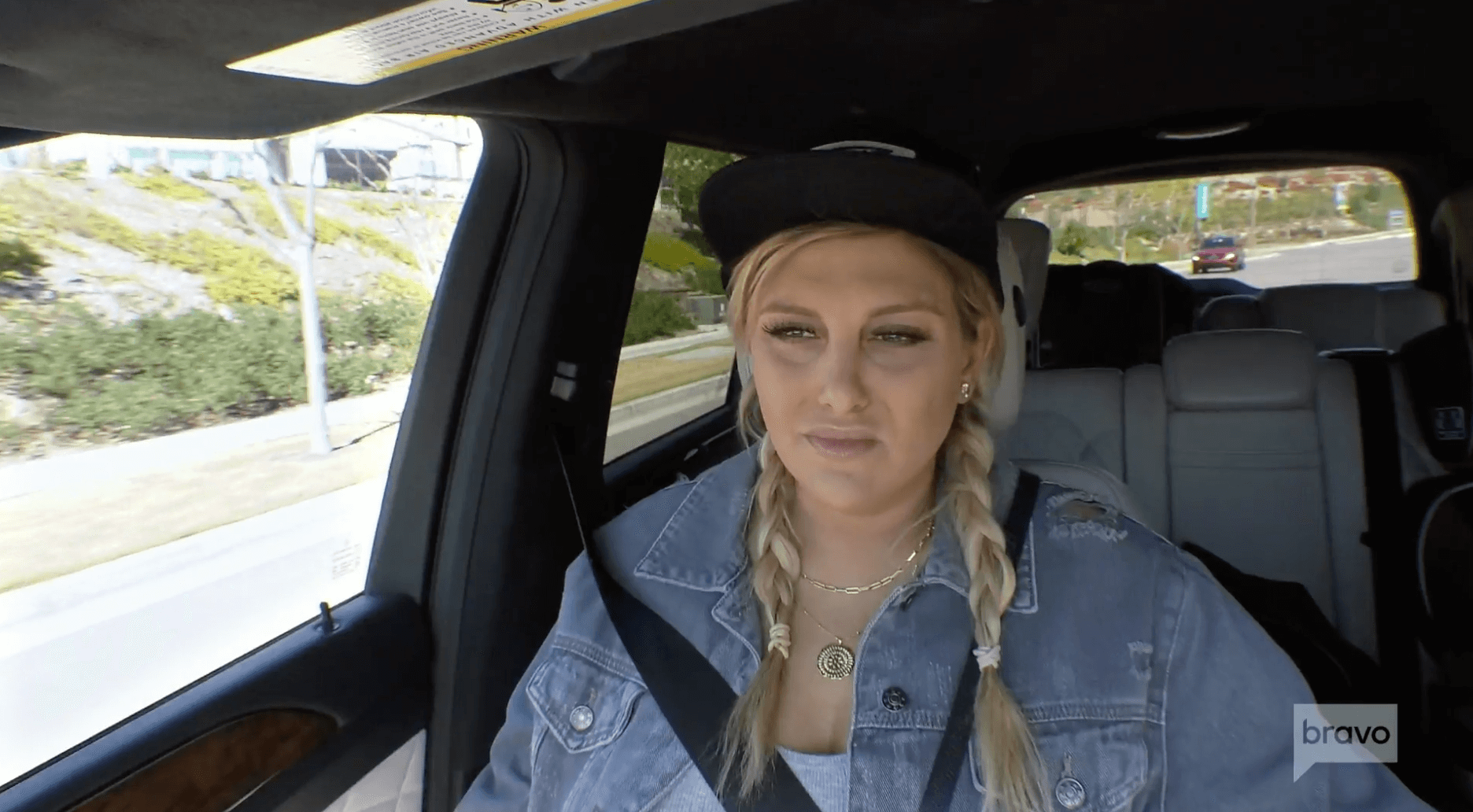 The two women head out to do a little shopping of their own. When Gina returns home, she’ll have six kids to deal with, whereas Braunwyn has two nannies. Emily says Braunwyn admitted to being too drunk to take care of her children. Emily calls the nannies an “alcohol support team.” She also tells Gina that Braunwyn’s dad was an alcoholic. Gina confesses that her dad was, too. He’s been in recovery for years now. So, she gets it.

Back at the boutique, Kelly and Elizabeth rehash the housewarming party. Elizabeth’s dad was an alcoholic, and she wants to be supportive. Hell, she’d even go to meetings, if Braunwyn needs her. Kelly’s not that supportive. AA meetings? Gross!

At another store in town, Gina tells Emily that Braunwyn texted her the day before, asking Gina to attend a meeting and grab coffee after. Gina’s down for it. Now that she knows what’s going on with Braunwyn, she has more compassion. 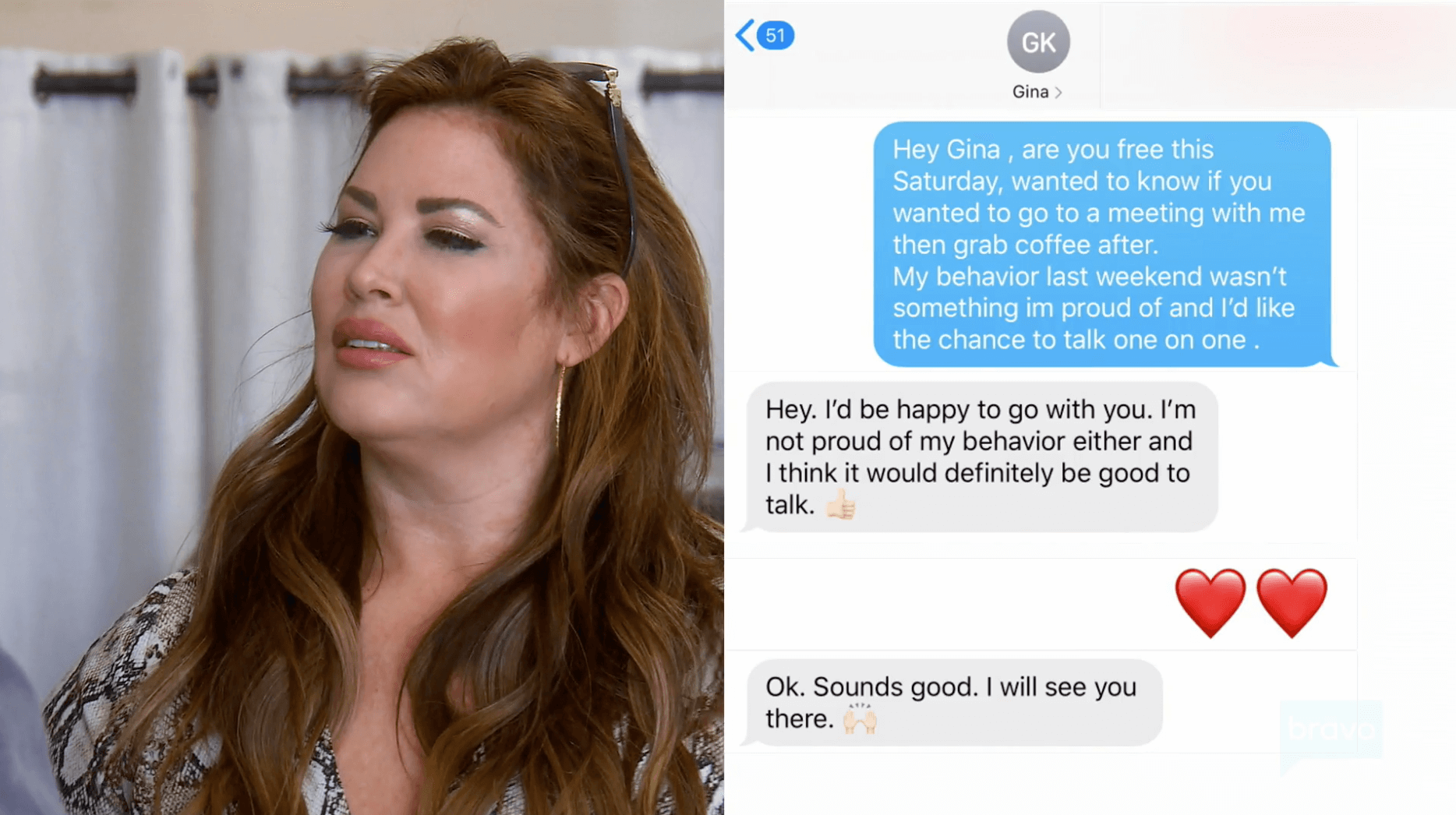 Sidenote: those sneaky, fat-shaming producers focus in on the jeans Emily and Gina are looking at. The sign reads size 24-29. I say love your curves, ladies!

Over at the rival boutique, Kelly thinks Braunwyn throwing Shannon under the bus was a shitty move. Shannon might have said the house was sad, but so what? Gina’s a survivor.

Elizabeth, who comes from a very poor background, thinks Braunwyn has lived a charmed life. She doesn’t understand what it means to struggle. Elizabeth’s family was so poor, her mom dove into the Walmart dumpster in order to put food on the table. 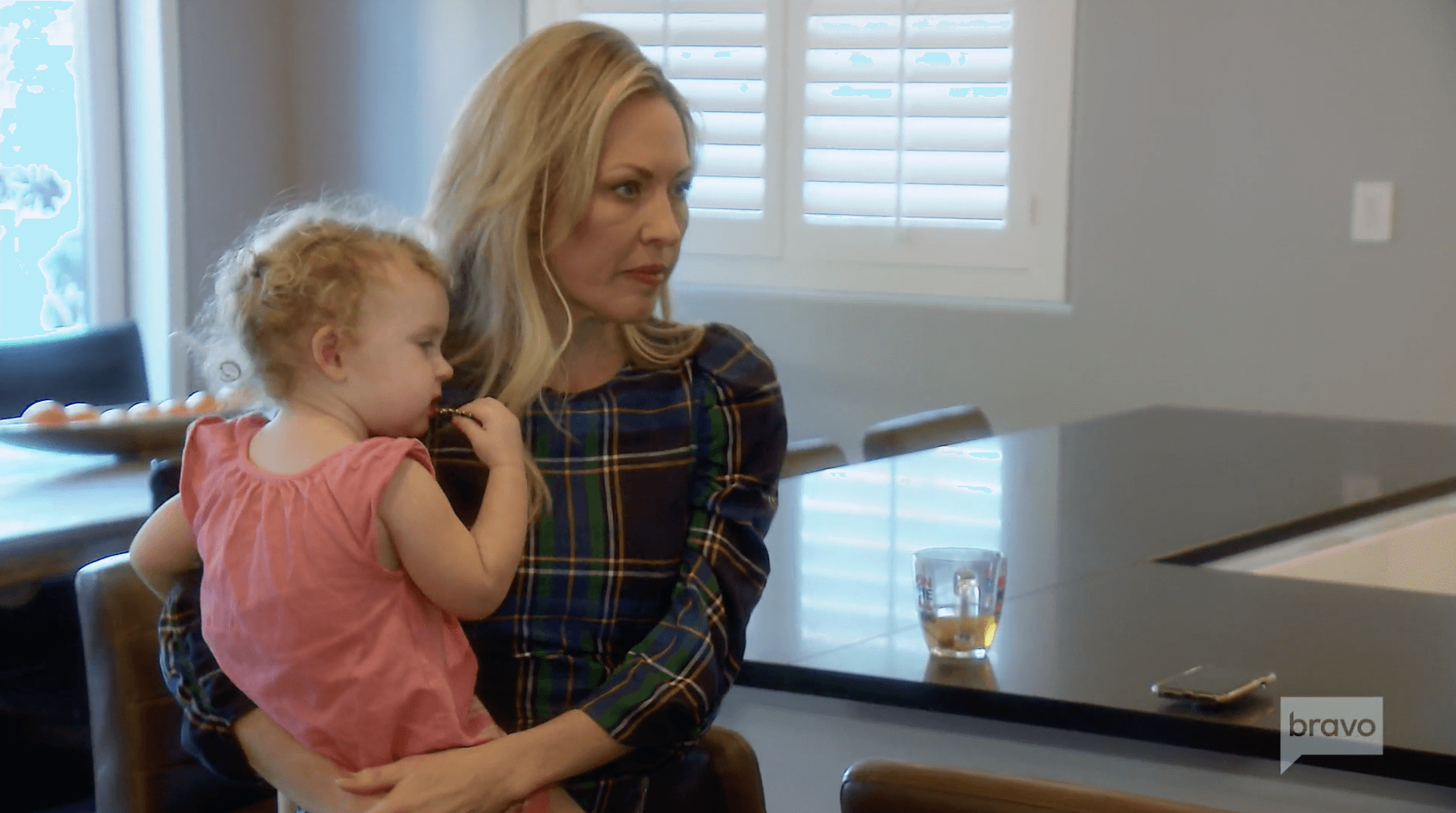 At Braunwyn’s house, she’s cuddling with baby Hazel and speaks to Sean about their upcoming vow renewal. They do it every ten years, and the last time, she was so drunk, she barely remembers it.

Braunwyn wants Shannon at the ceremony, along with her own kids and John’s, too. She passes off Hazel to make the call.

Braunwyn admits to Shannon that she’s embarrassed about her behavior. It may take awhile for Shannon to forgive her and move forward, but in the meantime, she wants Shannon at the ceremony.

Shannon pauses, then says she would never, I mean never ever, call Gina’s home sad. Braunwyn wanted to hurt Gina, but Shannon did say it. Shannon’s been a good, supportive friend and insists she doesn’t deserve this kind of treatment. 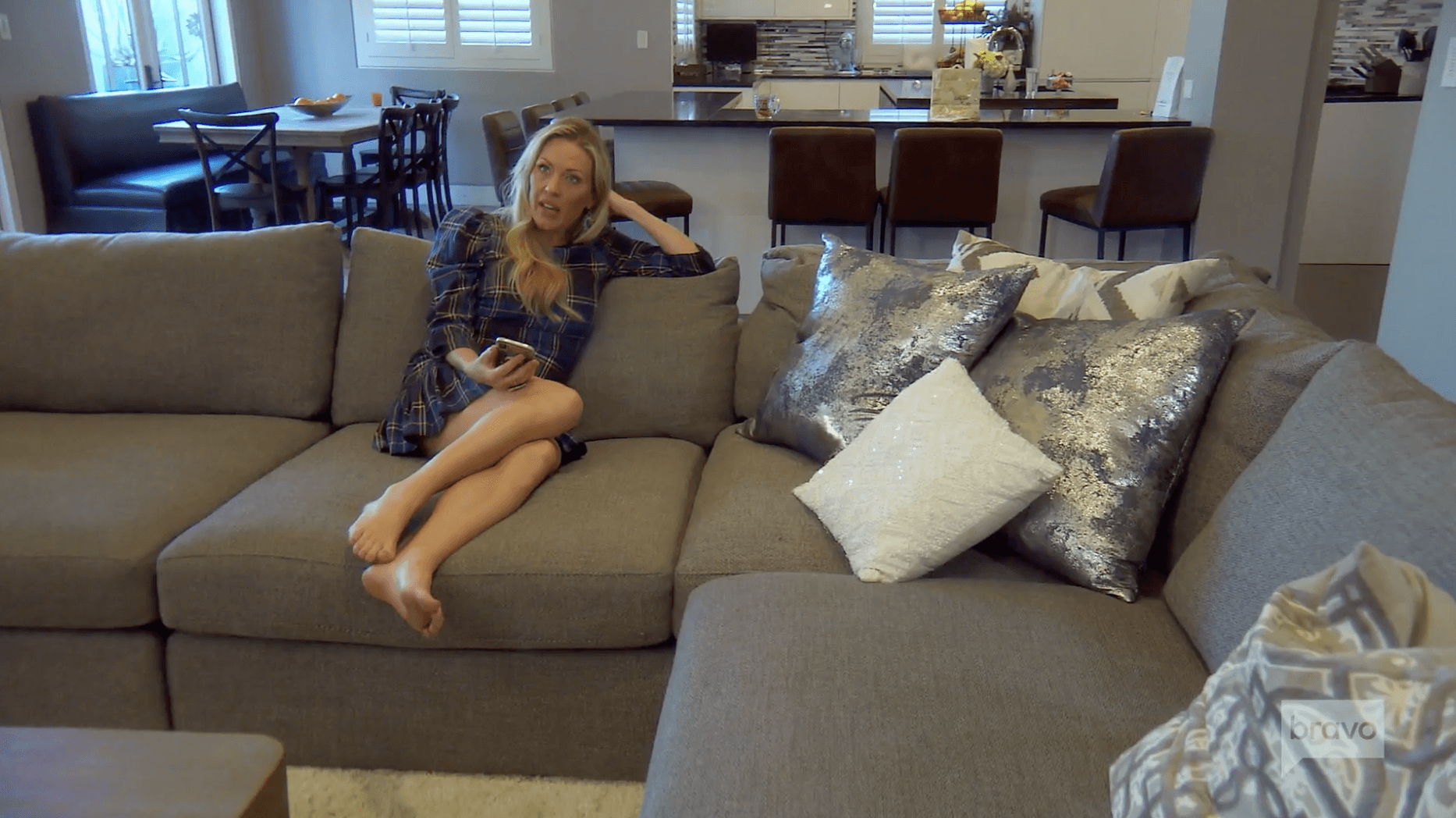 The only thing keeping Braunwyn sober is her truth. She’ll never mention the sad comment again. But Shannon isn’t so easily appeased. Braunwyn called Joe “lemonade boy” after all. Braunwyn says she didn’t mean it in a bad way, and she didn’t know the kid was John’s son. Shannon finally agrees to attend the ceremony.

At Kelly’s, Emily stops by. Kelly feels like she’s living on Wisteria Lane, the way all the women keep popping up for surprise visits. She’s used to solitude.

Kelly pours Emily a cocktail…only to drink it herself. Once she realizes, she passes it off to Emily with the promise that she’s Corona virus-free. Kelly can’t get over why people are freaking out about a virus. What’s the big deal? 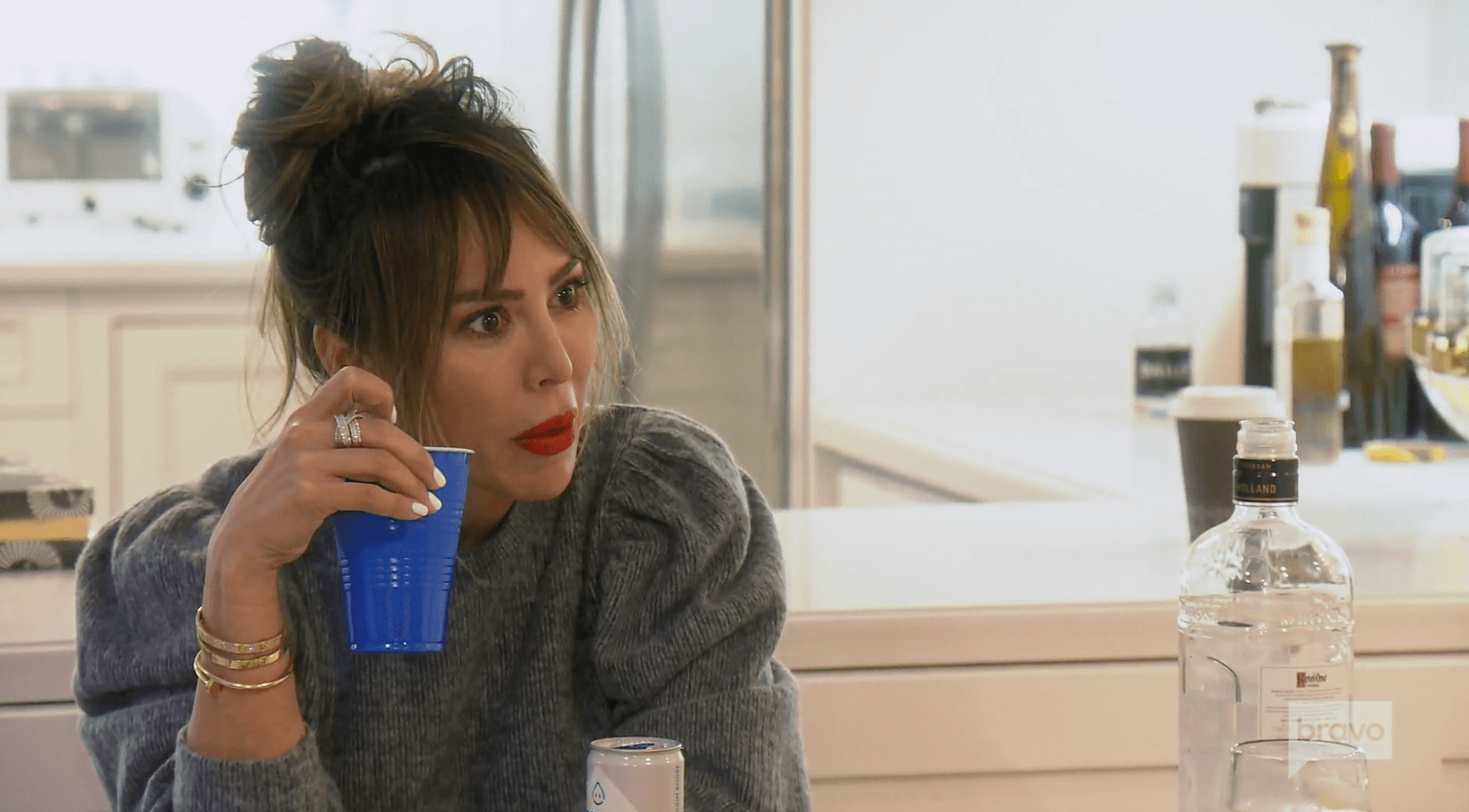 They talk about Braunwyn’s behavior at the party. Emily deems Braunwyn a “whackadoodle.” They agree Braunwyn is better when she’s drinking. At least then her over-the-top behavior can be explained away. They also think Braunwyn overexaggerates, and she’s too dramatic.

As they’re talking about Braunwyn, she calls Kelly. Kelly admits that she thinks Braunwyn is “freaky deaky off the sauce.” Braunwyn laughs and asks if she and Sean can come over.

In a moment that’s too twee, Sean and Braunwyn take a tandem bike to Kelly’s house. Braunwyn brings a mezuzah, which is a little piece of the Torah. Kelly has no idea what it is, but since she’s dating a man who’s Jewish, she accepts it. 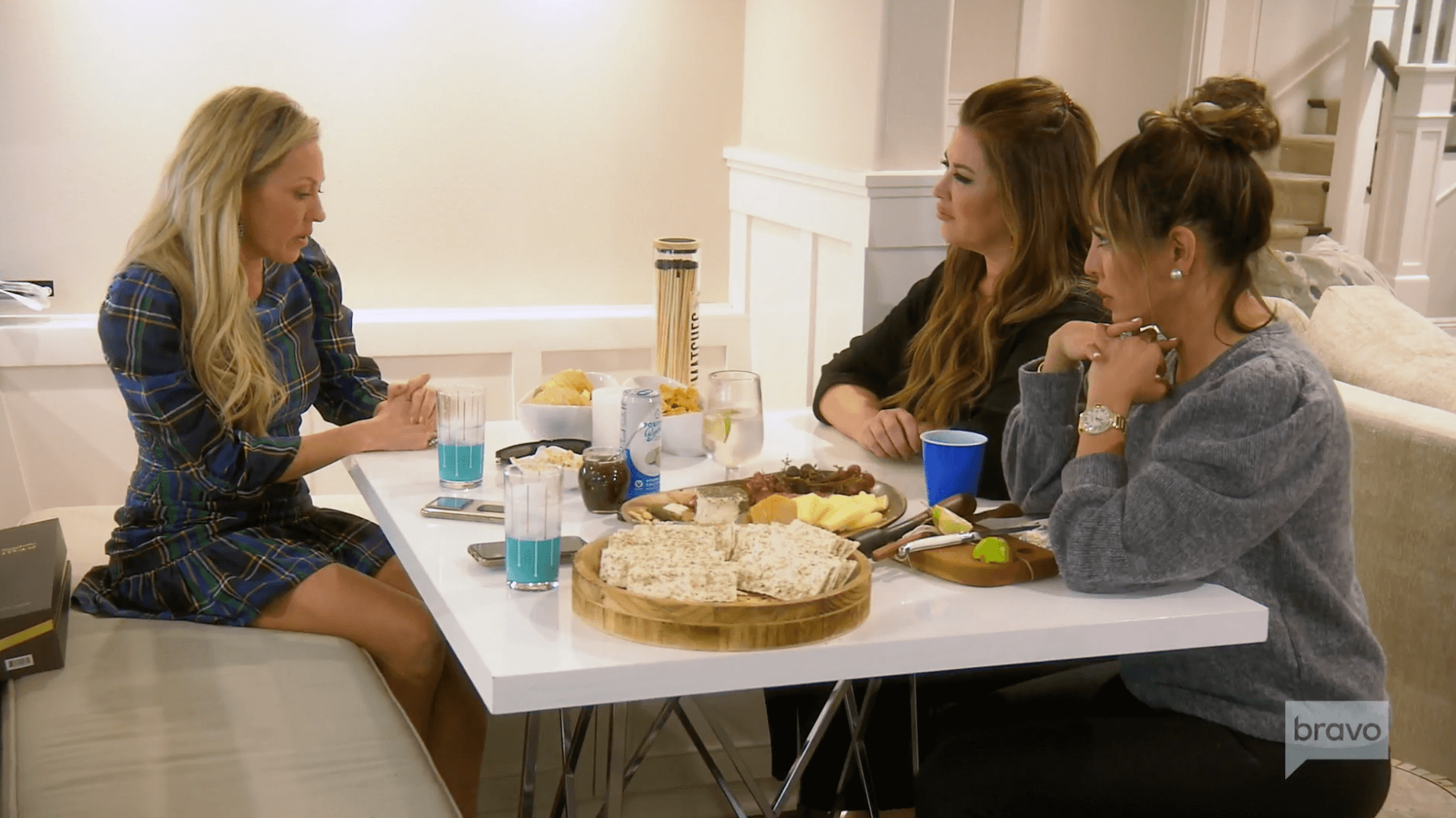 Kelly confronts Braunwyn about her temper tantrum at the party. Braunwyn admits she behaved badly, but she’s not backing down from her truth. She also says that she pulled Shannon into the drama as a dig at Gina, which was hurtful and cruel. Emily says that Gina is so upset, she doesn’t even want to go to Palm Springs for the vow renewal.

Over at Shannon’s, she talks to John about Braunwyn. Shannon thinks Braunwyn has a bad memory. She needs to focus on her sobriety and stop calling Shannon a liar.

And that’s our episode. So, we all know a vow renewal is the kiss of death for a marriage in the Housewife world. Why do they keep doing it? Thoughts?