Monique Samuels is looking on the bright side, after Bravo aired her beatdown of her Real Housewives of Potomac co-star, Candiace Dillard.

The reality star spoke out on Twitter after the cast conflict exploded on Sunday’s episode, writing that she was keeping her outlook positive.

“The blessing of experiencing lows means there’s no where to go but UP! Keep watching to see the entire journey. I’m grateful for my ups and my downs because they help me grow. I’ll continue to look for the positives wrapped within the negatives and move forward #RHOP” Monique tweeted. 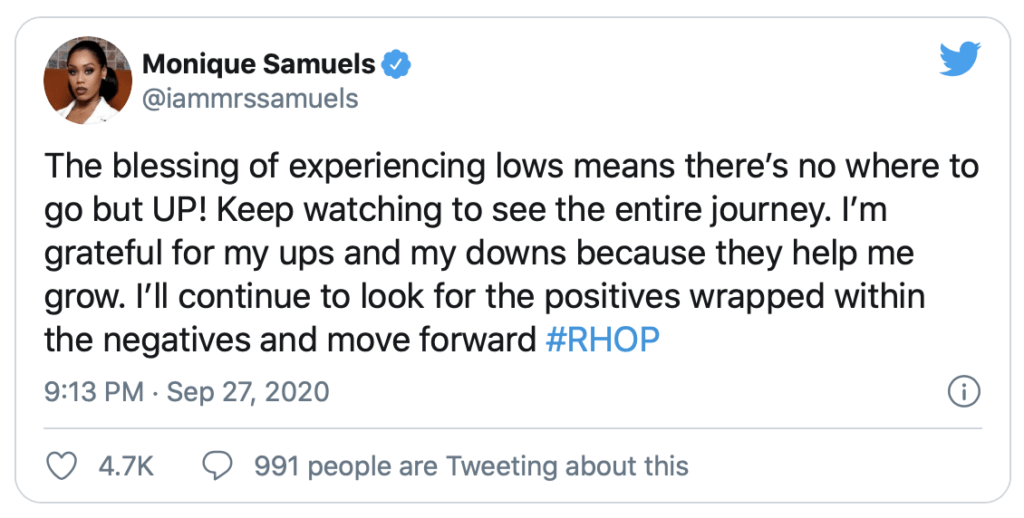 Monique Samuels appeared to grab her co-star by the wig during a cast event at a winery, dragging her across the table. Producers were forced to physically separate the women, after Monique refused to let go. Monique insisted that Candiace had “asked for it.”

“You keep talking. You literally want someone to hit you, so that’s what happened,” she said of the altercation.

Fans know that the duo’s friendship became a rocky one after Candiace invited Charisse Jordan Jackson to her party. Monique believes that Charisse was behind an affair rumor that threatened to destroy her family. Monique has denied the affair, and Charisse denied spreading the gossip.

Candiace Dillard warned her Twitter followers about what was coming before the episode aired, and shared that she was still processing the incident.

“You’ll see everything. All of it. They really left little, if anything out,” she tweeted. “It’s raw. It’s very traumatic for me. I would be lying if I said I’m okay. I’m not. The level of instability a person has to have to behave the way she did and then double down on it is incomprehensible.”

The Real Housewives of Potomac airs Sundays at 9 pm, ET, on Bravo.