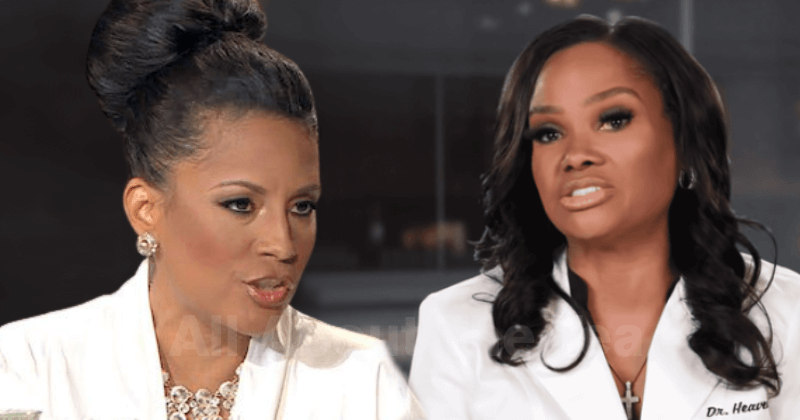 During a recent interview Heavenly Kimes accused her costar, Lisa Nicole Cloud, of messing with her money.

Lisa Nicole Cloud departed the Bravo reality series at the end of season 4 after she was thrown into gossipy crossfire by Heavenly Kimes on multiple occasions.

During the interview with Shari Nicole, a fan asked the dentist if she was currently on good terms with Lisa Nicole Cloud — Heavenly responded with, “NO!”

She added, “I don’t play with my money, I don’t like people playing with my money. I work too hard for it. I’ma just keep going…I don’t…No…No…No!”

Heavenly Kimes also attacked costar, Toya Bush-Harris while answering another Instagram user regarding where their friendship stands — Heavenly stated, “I just think Toya’s an idiot, I just do.”

Heavenly continued, “The stuff she does and the stuff she says is not thought out. And it’s just stupid and I know she’s there for a check. She needs her check. But the stuff she’s doing just does not make sense. It’s too disrespectful, it’s too far. And when you retaliate, her feelings hurt.”

As previously reported, Lisa Nicole Cloud returned to Married To Medicine for season 8. She’s married to Dr. Darren Naugles, they have two kids together and Lisa is an entrepuener, who runs several businesses.