Part three of the NYC is here. The Real Housewives of New York City final reunion episode brings an end to the drama, and we start with Ramona Singer apologizing to multiple people throughout the season.

Sonja Morgan talked nonstop about getting dick. Luann de Lesseps tried to wrangle the ladies and keep them in line. And Dorinda Medley had a couple of catch phrases: “Here’s the thing” and “Can you imagine?”

Next, we see Ramona flitting around at different restaurants, handing out her phone number like an Olive Garden server doles out breadsticks. Ramona says she has to elevate herself among her other friends, but with Sonja she has to bring herself down. Then we hear Ramona yak about her fifty close girlfriends. And we’re treated to the purse she bought herself for her birthday — by asking her friends to contribute cash for the purchase. How déclassé!

Luann de Lesseps and Sonja say Ramona acts differently in the Hamptons than she does in the city. Out in the Hamptons, she’s a try hard. But Ramona defends herself for doing things like ducking out and leaving her guests alone in her Hamptons house. She wanted to have fun. The ladies were too boring to party with her.

Sonja argues that all of Ramona’s friends are really Sonja’s longtime friends. Talk about friend jumpers. Sonja says she’s not a fly-by-night pal. She has staying power as a friend. And by the way, Sonja refused to contribute to the purse fund. Take that, Singer!

Ramona Singer rebuts, saying she’s cultivated her friends for the past thirty or forty years. She sees them all the time — for lunch or at bar mitzvahs. They’re close, get it?!

Leah McSweeney calls out Ramona for having a fake Gucci bag. Is that worse than fake friends, though? Still, Leah thinks it’s weird how excited Ramona acted when she unwrapped her green Gucci bag.

Ramona also told Sonja this season that she needed to lose weight. Sonja says Ramona’s fat shaming made her cry, and it caused Sonja to start eating even more. 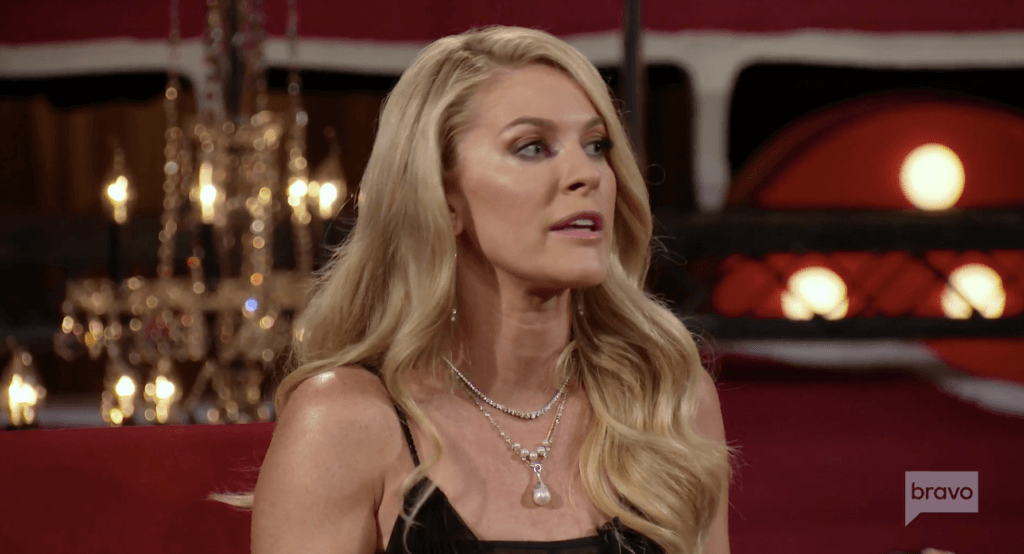 Dorinda Medley jumps in and says that Elyse, Ramona’s former bud, kept going to her and Leah, complaining about how badly Ramona treated her. Elyse was very confused why Ramona turned on her. Ramona says Elyse is a black widow who promised she’d have Ramona’s back, and she reneged on that promise. When Elyse didn’t have blind loyalty to Ramona, the friendship was over.

Ramona wants to surround herself with only happy people and fill her life with positive energy. Dorinda says that’s just a superficial friendship. Real friends let you talk about the tough shit, the hard parts of life, not just the good stuff. Sonja raises her hand, saying, “Here I am” to signify the type of friendship she offers. We later find out that Sonja called Dorinda often, and they were a source of consolation for each other.

Sonja had a good season where her dress line was concerned, but her townhouse was still draining — both financially and emotionally. We see Sonja’s triumph at the fashion show, then the depressing realization that her townhouse needed a lot of work. Still, when she got the news that Century 21 wanted to sell her line, it seemed like things were on the upswing for Sonja.

She now says it’s been a long climb to success. Ramona gives her kudos — or kudooze as the case may be. Andy says how proud he is of Sonja. We see a backflash of her toaster oven, a Nigerian football team, and the cheater brand, Tipsy Girl. She says they aren’t mistakes, just experiences.

She’s dropping the price on the townhouse because she wants it to sell. Leah wants to see it just once before someone buys it.

Sonja also says this season was a dry one, sexually speaking. That’s why she was eating so much. But she’s lost twenty-seven pounds at a spa, and her vagina is once again open for business.

The next package is Dorinda and her anger issues. We see her cry, yell, get drunk, and grieve over her deceased husband, Richard. Tinsley got most of Dorinda’s ire, but she wasn’t the only one Dorinda attacked. She went after Ramona and even Luann, taunting her over the drunken arrest. 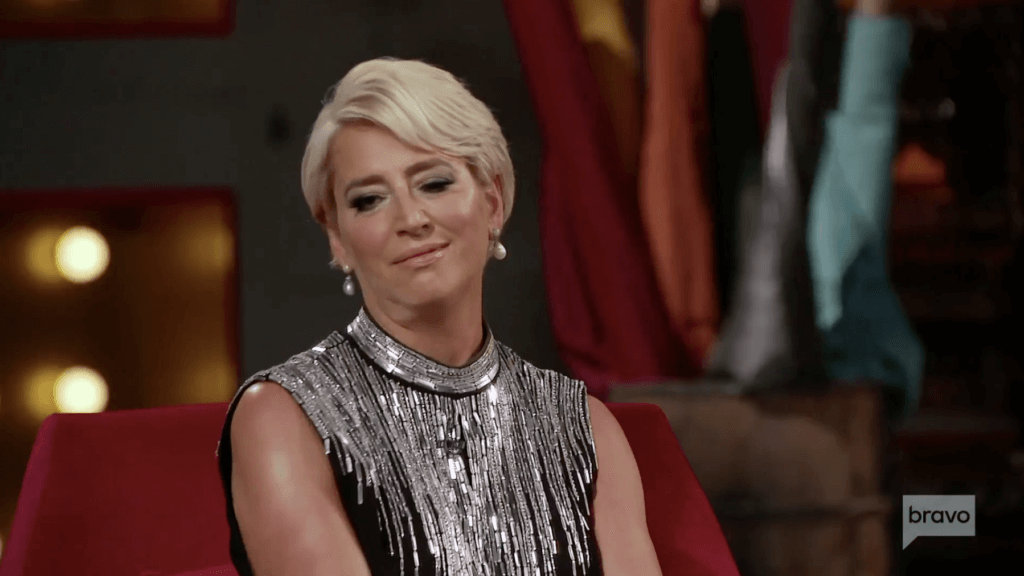 Dorinda blames her bad behavior on being overwhelmed with her broken rib, the flooded house, and her breakup with John. She says she spent most of the season angry. Watching the show, she thinks Ramona made things worse. Ramona never contacted Dorinda outside the show, never showed her any compassion. But Ramona pulls out the receipts: copies of texts she sent everyday after the show ended. As far as Dorinda is concerned, that’s too little, too late. Couldn’t Ramona pull her aside and mention her concern during filming?

Andy points out that when Luann tried to gently bring things up to Dorinda, she ignored Lu. Now, Dorinda apologizes to Lu, saying Lu came from a good place. But Ramona had no compassion, and Leah agrees. She thinks Dorinda had to have been in emotional distress after her breakup, but Dorinda covered up her pain.

Andy asks why Dorinda has been so hard on Tinsley about not sharing her life with the audience, when Dorinda herself held back from showing her grief over ending things with John. Dorinda defends herself, saying she showed it all. She just wished Ramona had reached out privately to ask if she was all right. Sounds like doublespeak to me.

Ramona says that Dorinda came to her home for cocktails and convo, and she said some pretty hurtful things to Ramona. The next day, she made Ramona a playlist. But Ramona says at the Halloween party, Dorinda started belittling her once again. And afterward, Dorinda sent an apology text, which Ramona starts to read. Dorinda, obviously uncomfortable, tries to interject and steer the conversation in another direction. Andy tells her to be quiet and let Ramona have her turn. 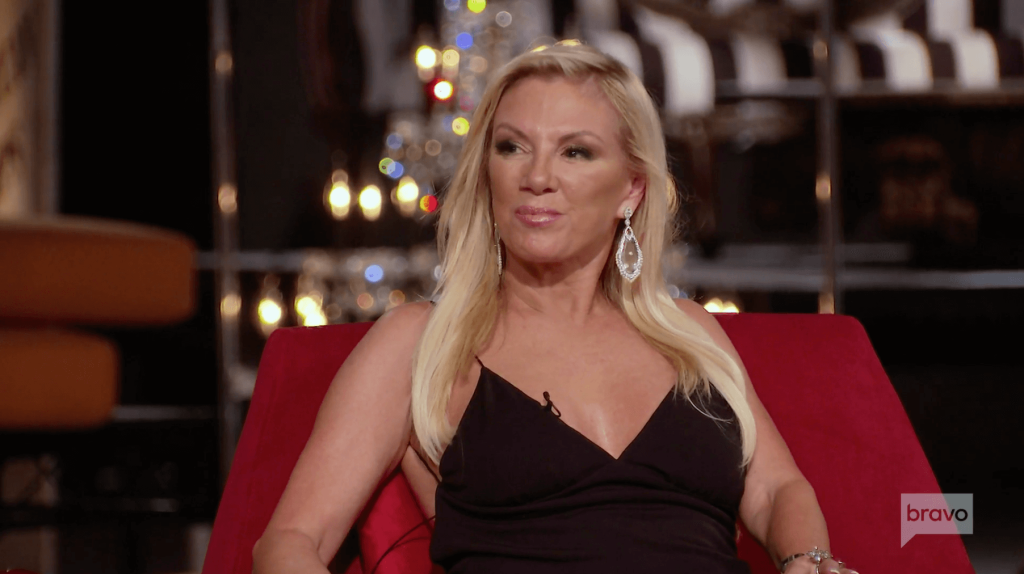 Dorinda yells over Ramona, saying she uses people and the texts are one-sided. Ramona starts to fake cry and throws the papers on the floor. Dorinda chides her for being low class. Andy asks for Lu’s opinion, and Lu tells Dorinda how hurt she was to have never received an apology. Furthermore, Dorinda didn’t regret her harsh words. You can see how upset Luann really is — the pain in her voice, the tears in her eyes.

Dorinda tries to talk to Lu, but stops to instruct Ramona to pick up the papers. Andy picks them up and read through them as Lu says Dorinda needs to realize that her words were really hurtful.

Andy asks Leah’s opinion of Dorinda’s behavior. She says Dorinda has always been super cool toward her. Luann tells Leah she’s not blind, she saw how Dorinda treated Luann and Ramona over the course of the season. Leah says Dorinda doesn’t hit below the belt. Ramona squawks at that, while Luann takes offense. Dorinda went way below the belt when she kept brining up Luann’s arrest.

Dorinda finally admits — at Andy’s prodding — that she was defensive for most of the season. She says she was wounded, weak. Ramona asks Dorinda why she didn’t just acknowledge it. Dorinda says she was on the verge of a nervous breakdown. She was too damaged to admit anything.

Even though Leah continues to defend Dorinda, she was super upset at the finale where Dorinda went off like a Roman candle at the sound of Tinsley’s name. Instead of admitting her actions were out of control, Dorinda doubles down on the excuses — although she admits to calling Leah the next day to apologize. 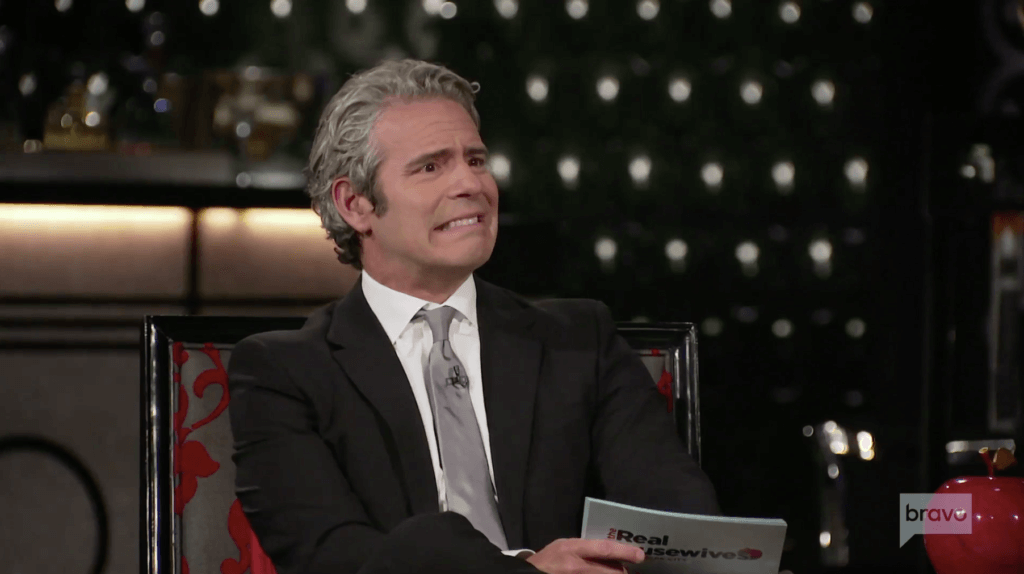 Andy reads a text from a fan, telling Dorinda it’s all right to admit when you’re wrong. And in that light, is there anything Dorinda did that she regrets? Her interactions with Lu, she finally admits. And her freak out at the finale. But this thing with Ramona is still bothering her.

Dorinda suggests she and Ramona have a reset. The only way to go forward, according to Dorinda, is to not rehash the past. Ramona wants that, too. They stand and rub elbows. 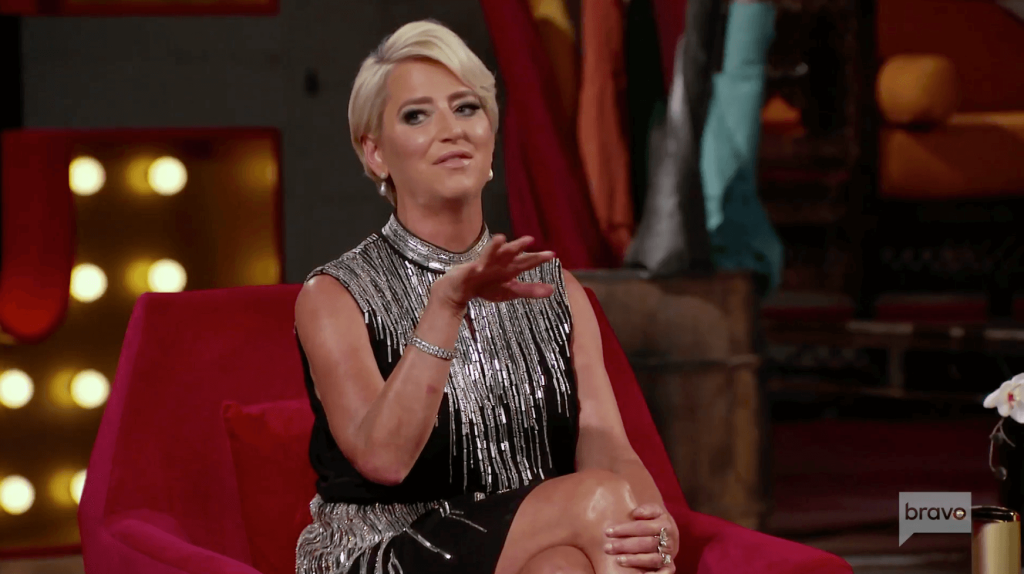 Toward the end of the episode, Andy asks what each Housewife would like to distance and what they can’t wait to embrace. Ramona takes the opportunity to apologize to Leah for bringing out her bipolar issues and says she’s looking forward to a new chapter with Dorinda. Dorinda feels sorry she hurt Luann, and she’d love to hug everyone. (I’m guessing Tinsley doesn’t count.) Luann didn’t like the way she behaved in the Berkshires and wants to hug them all. Sonja wants to distance herself from her drinking. She wants to embrace Dorinda. They reached out to each other all season, and even though Sonja was going through her own problems, she was there for Dorinda. Finally, Leah would distance herself from Rhode Island, and she would hug Ramona because she still has mommy issues.

Press play below to watch All About The Tea’s Real Housewives of New York recap on YouTube and SUBSCRIBE to our channel.

Andy Cohen congratulates himself for accomplishing something positive with the ladies. Then he takes a socially distanced (kind of) selfie with the women.

And that’s a wrap! So, what did you think of the season? Was Leah McSweeney a good addition? Are you glad Dorinda is taking a break from the show? And who got your MVH (most valuable Housewife) for the season?