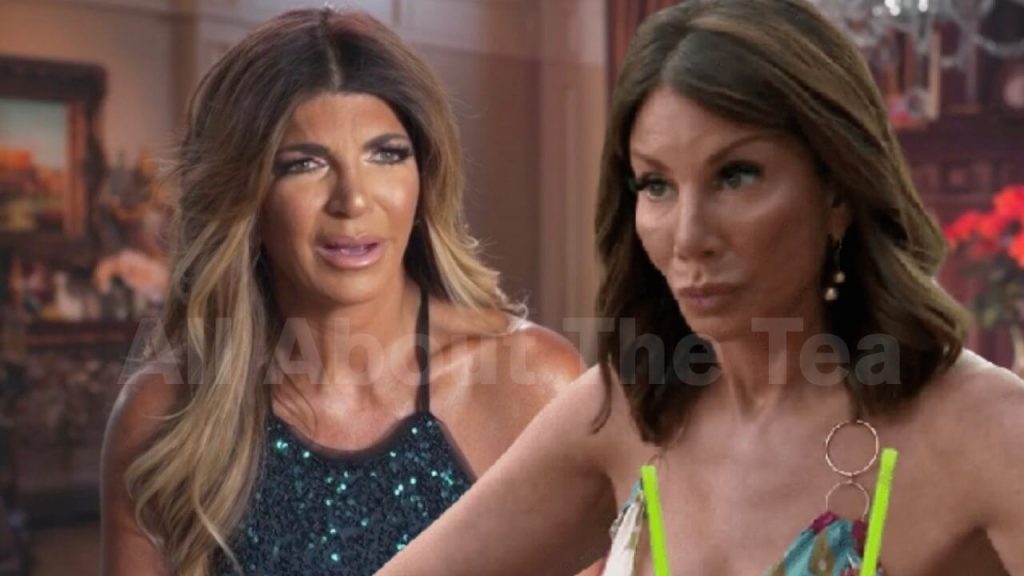 Real Housewives of New Jersey alum, Danielle Staub, is accusing Teresa Giudice of living in a ‘trashy’ trailer during Season one of the Bravo reality series but AllAboutTheTea.com can confirm that’s a boldface lie.

In a recent episode of the ex-reality star’s podcast, “Absolutely Danielle,” Danielle Staub suggested that Teresa Giudice lived in a trashy trailer when the duo filmed the first season of RHONJ.

Danielle Staub, 58, described a housewarming party chronicled during Season one, and alleged that the Jersey bash wasn’t even filmed in Teresa’s home.

“It was supposed to be, and it was advertised as, ‘Teresa Giudice’s housewarming party.’ I’ve had several housewarming parties. I’ve been to several, I’ve had a few of my own, I should say. And, not for nothing, they’re at your home,” Danielle explained.

Danielle Staub called out the event as reality TV smoke and mirrors, alleging that the party was not held in Teresa’s actual abode.

“That’s why it’s called ‘housewarming,’ but then again, Teresa’s little brain cannot function on its own. So, I’m sure that she thought it sounded like a great idea to hide the fact that she didn’t really have a home that she was moving out of,” Danielle alleged. “She was living in a trashy trailer with linoleum floors.”

Danielle added that Teresa never filmed from her home during her early days on the show, because she wasn’t proud of her address.

“Teresa never took pride in it or she would have showed it on a reality show instead of filming at [Jacqueline Laurita]‘s house all the time. Even her interviews were at Jacqueline’s house,” Danielle Staub claimed.

Fans of the series know that Danielle Staub and Teresa Giudice became enemies early on, and that their contentious relationship triggered the table flip that set a new reality TV standard. The duo later made amends after Teresa’s federal prison stint, but fell out again at the end of Season 10. Their relationship remains broken.

AllAboutTheTea.com did some digging and can verify that Teresa Giudice did NOT live in a trailer while filming season one of The Real Housewives of New Jersey. She actually resided at her former Lincoln Park property pictured below BEFORE she moved into her lavish Towaco, New Jersey mansion that was showcased on RHONJ. See below.

The real tea is, Teresa lived at the Lincoln Park property pictured above while she was building her Towaco, NJ mansion.

Scroll through photos below from Teresa Giudice’s housewarming party during season one.

A return date for the Real Housewives of New Jersey has not been announced.