Welcome back to an all new episode of Real Housewives of Potomac – the one where Ashley Darby’s dog of a husband admits on camera that he took a stripper back to a hotel room. Oh, and Monique Samuels finally gets around to dragging Candiace Dillard. Without further ado, let’s get started!

The episode opens with viewers and fans alike being traumatized by Candiace Dillard belting it out in a studio as she records a remix of her wedding song to her husband, Chris. The remix is complete with cow bells, bongo drums and of course, Candiace pretending that she actually gives a crap about her husband and not just how this “song” can further her career.

During a water break, in between name dropping the likes of Nas, Biggie, and Faith Evans, she declares that she is “like done-done” with frenemy, Monique. “She’s plastic,” Candiace Dillard adds. Well, alrighty then. So much for the bromance going on between Chris squared. Sigh.

Meanwhile, across town, the Darby’s are meeting for a very somber lunch in which Michael is expected to admit on camera that he did in fact meet a stripper, get into a cab with her and go back to a hotel room but somehow managed to not seal the deal as he fell asleep and magically woke up in his underwear. Sure, Jan. 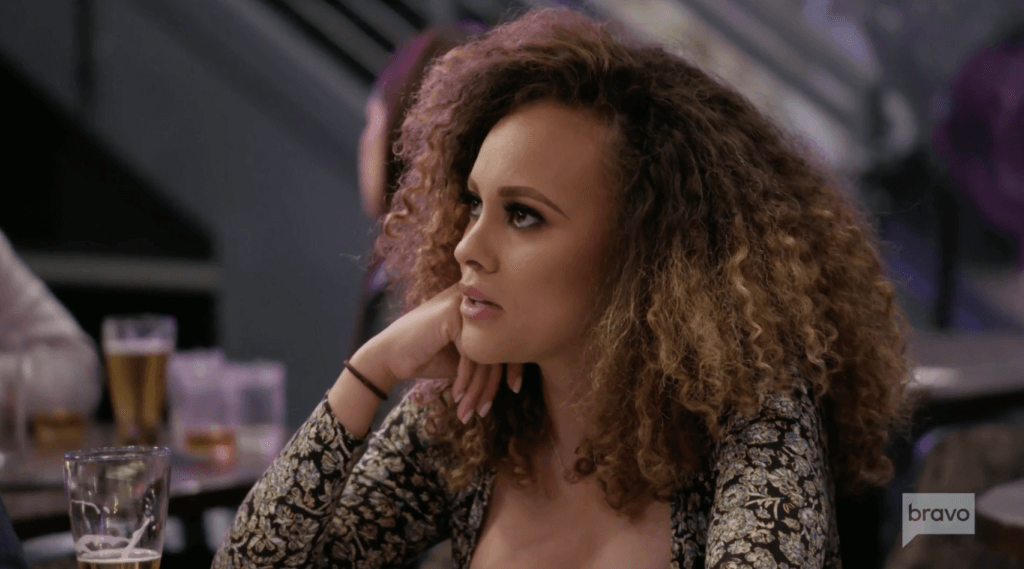 It becomes very apparent that Ashley also rehearsed her talking points for the on-camera admission as she casually brings up that because the couple has had threesomes in the past (with women of only her choosing) it’s not so much the fact that he cheated on her but that he didn’t tell her about it beforehand. UM, WUT?

“I should’ve told you,” Michael says. Ashley then makes it very clear that threesomes and any stepping outside of the marriage officially stops now but here’s the kicker: Michael implies that the cheating was all Ashley’s fault anyway as they had “lost their intimacy” as of lately and he was simply “craving” something he shouldn’t have been. At which point, I am extremely surprised that postpartum Ashley didn’t take the entire bowl of brussel sprouts and throw them in the troll’s face. There’s always next time, I suppose. Like after the second baby arrives and he’s once again left to his own devices to quell his insatiable appetite for strippers… or cameramen’s butts. Whichever comes first. 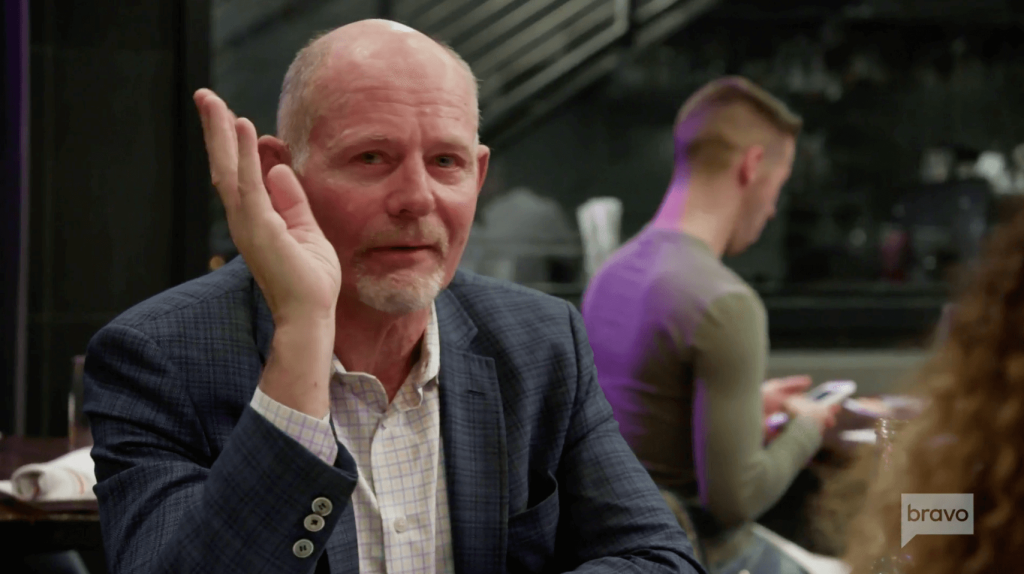 When Ashley insinuates that this is Michael’s last chance before she leaves him for good he proceeds to have a temper tantrum demanding that they wrap filming and that someone bring him another beer. Cue the producer coming out and thanking both Michael and Ashley for being so “open and honest” a la Kyle Richards. “I’ve just shared something that will affect our marriage forever,” Michael whines, as if he’s not the one responsible for it all. He then promptly removes his microphone and once again motions abruptly that someone bring him another Corona STAT. Someone, get that man a beer — OR ELSE. 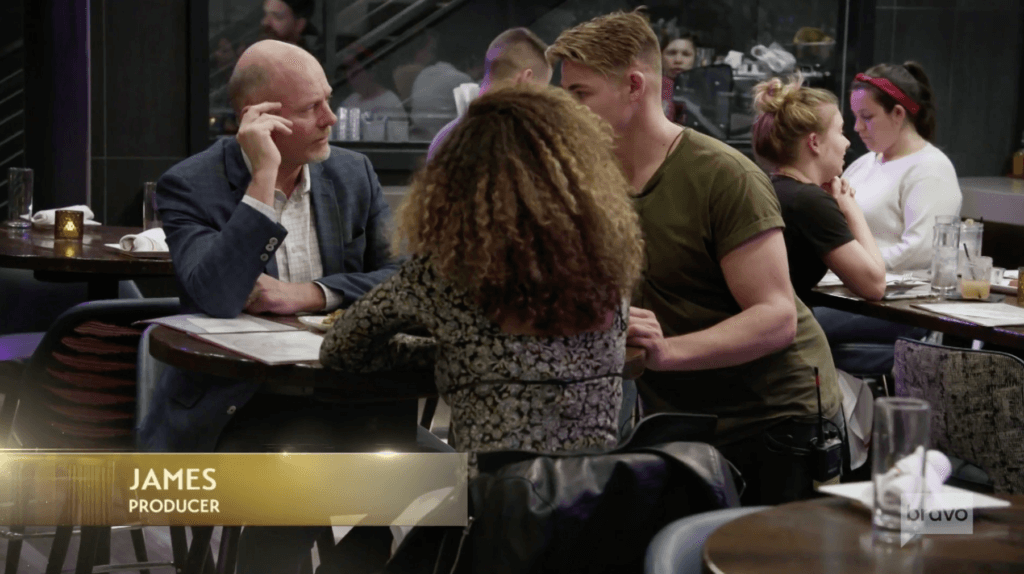 Cut to Monique holding a team meeting at her new office to discuss her Not For Lazy Moms live podcast. Monique’s staff has the undesirable task of letting her know that only 20 out of 300 tickets have been sold… for an event she’s already spent $80K on. She then mentions that while Karen Huger is still set to make an appearance and discuss her long marriage with Ray, she’s worried that Candiace is going to back out on her. Luckily, Monique doesn’t count it as a total loss as she points out that it’s a little silly for Candiace to come on and discuss the honeymoon phase of their marriage seeing as how they haven’t even been on their honeymoon yet.

Across town, Gizelle Bryant and Robyn Dixon meet at a furniture store for the sole mission of decorating Gizelle’s “tear down cabin” as Candiace so lovingly refers to it. According to Gizelle she wants her house to be all white everything and “blingy.” Interior designers everywhere are collectively clutching their proverbial pearls. 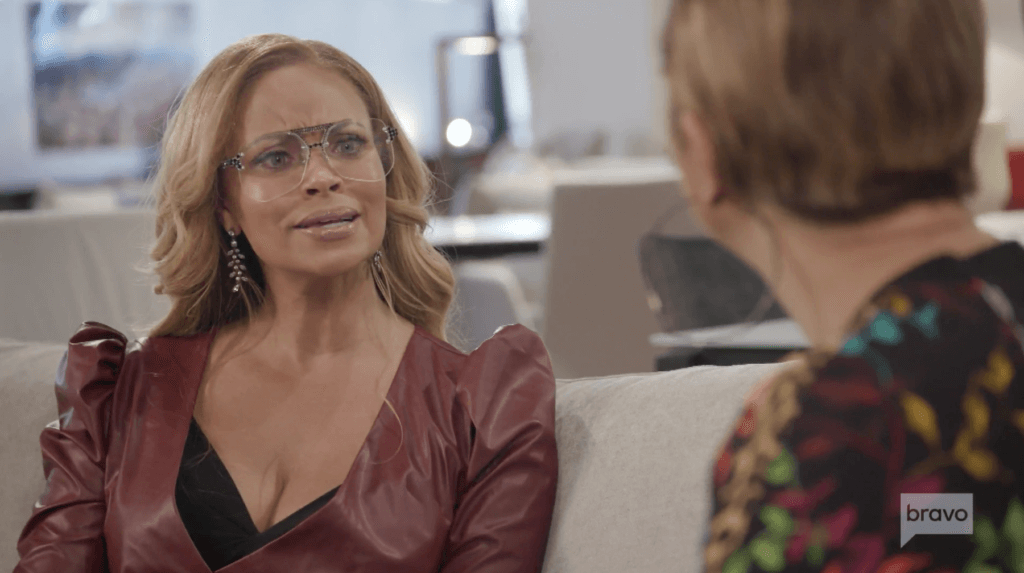 Of course, Ashley’s tumultuous marriage rears its ugly head and in a very relatable moment Robyn reveals that she accidentally text a link of the article circling around about Michael’s infidelity to Ashley instead of Charrisse. Literally my worst nightmare come true. Fortunately, Robyn is quick on her feet and made it seem as though she meant to send it to Ashley, including a follow-up text asking, “What do you want us to do?” PHEW. 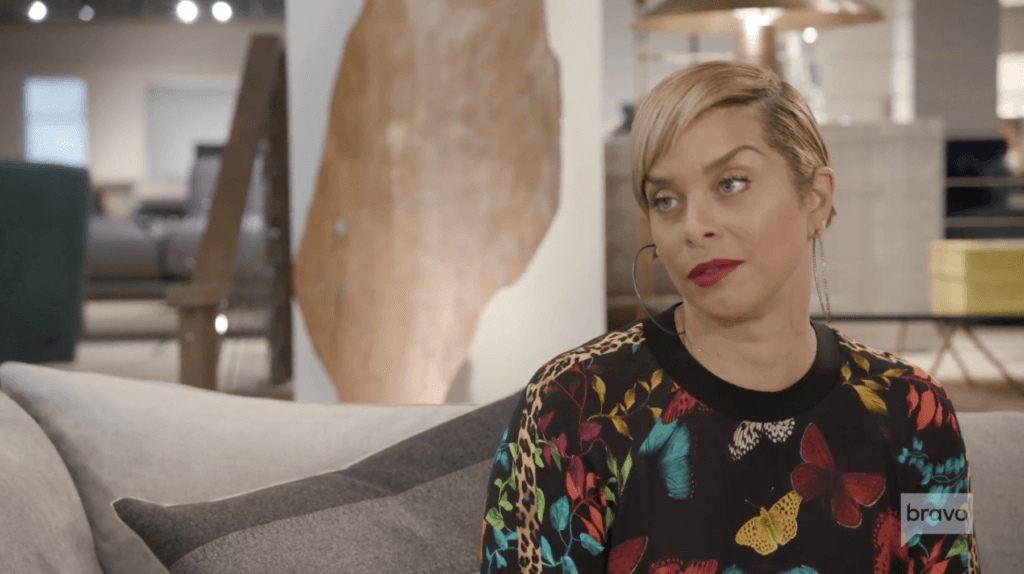 Gizelle Bryant  also mentions that she wants to get all of the girls together for a wine tasting at a winery nearby to celebrate winning the literary award. She even admits she picked a winery because she thinks that’s the one place the ladies won’t “act a fool.” Famous last words, Gizelle…

During a Karate class for their son Cruz, Wendy Osefo and her handsome hubby discuss the fact that her maternity leave is quickly dwindling down. She then admits that she’s unsure if she can go back to teaching at Johns Hopkins University. While her husband is extremely supportive, Wendy is certain that her mother won’t be. According to Wendy her career is her mother’s “pride and joy.” YIKES.

While Ashley certainly has her fair share of problems, it’s not all rainbows and butterflies in the Samuels’ house either. During a family walk, Monique vents her frustrations about the lacking ticket sales for her live podcasts and her husband, Chris, rather astutely points out that if she’s not turning a profit she needs to “cut back.” Unfortunately, the advice falls on deaf ears. “I don’t want to do what he’s telling me to do,” Monique later says in her confessional.

Eventually Monique lets the cat out of the bag and admits to her husband that she’s spent “close to $200K” on start-up costs since Not For Lazy Moms inception. WOWOWOWOW. Chris then points out that eventually if the business is not performing well, Monique’s going to have to “shut it down.” As one can imagine, that doesn’t go over too well. According to Monique while this “baby didn’t come out of her vagina” it’s still her baby. A very expensive baby, I might add…

Monique Samuels then tells Chris that Candiace has indeed dropped out of the live podcast. Surprise, surprise. “She’s so darn professional. Selfish people don’t think about the other end,” Monique says, citing all of the costs she will now incur to have graphics and fliers changed.

Robyn Dixon visits her parents and shows off her brand-new matching ring finger tattoo with Juan. They seem “thrilled.” She then drops a bomb and reveals that she and Juan are considering the idea of getting married – again. Robyn’s father doesn’t seem too keen on the idea, but her mother seems thrilled. Robyn assures her father that this time around the two will definitely be involved in some couples counseling so as to start off on the right foot.

Most likely in an effort to distract her from her horrible marriage, Ashley takes her younger sister, Jessica, homecoming dress shopping. While Jessica is trying on dresses, Ashley’s mom corners her and launching into a tirade about how angry she is at Michael. “Make sure this man knows there are consequences when you make these kinds of mistakes.” Ashley is adamant that she is not afraid to Michael as she has done it before. “He knows this is it,” Ashley maintains.

Finally, we make it to the moment we’ve all been waiting for. The infamous winery/barn scene where Monique and Candiace go toe-to-toe. Right away, Ashley ever so casually drops a hint that she might be pregnant and then proceeds to address the elephant in the room a.k.a. her low-down dirty dog husband. “Yes, there is truth to what was said,” Ashley admits. Then she launches into a long account about how Michael did go to the hotel with a stripper but did not have sex with her as she was too drunk.

The ladies all exchanged horrified looks but the best reaction belongs to Wendy as she says in her confessional, “SIS. NO! Have you seen Michael? Who’s cuddling with that?!” I’M DEAD.

Ashley Darby then makes a shocking confession to the ladies explaning that their marriage isn’t exactly what one would call traditional and that she and Michael “have been in situations where they’ve been with other people.” And there ya have it, folks. 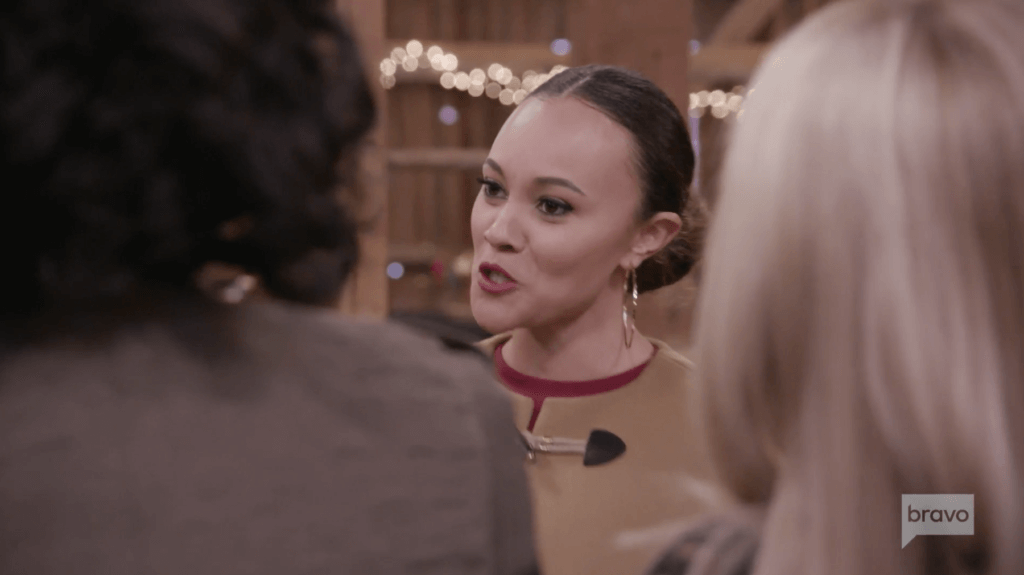 Finally, the conversation turns to Monique and Candiace. Ashley asks if they are “good.” While talking loudly for all including Monique to hear she tells Ashley, “We are where we are. Cancellations happen and you live with cancellations.” The two carry on their own conversation, competing to speak over one another until finally Candiace grabs what appears to be a cheese knife (this time) and starts clinking her glass. “I love Monique. Even when Monique pretends to be asleep when I’m about to leave her house.” 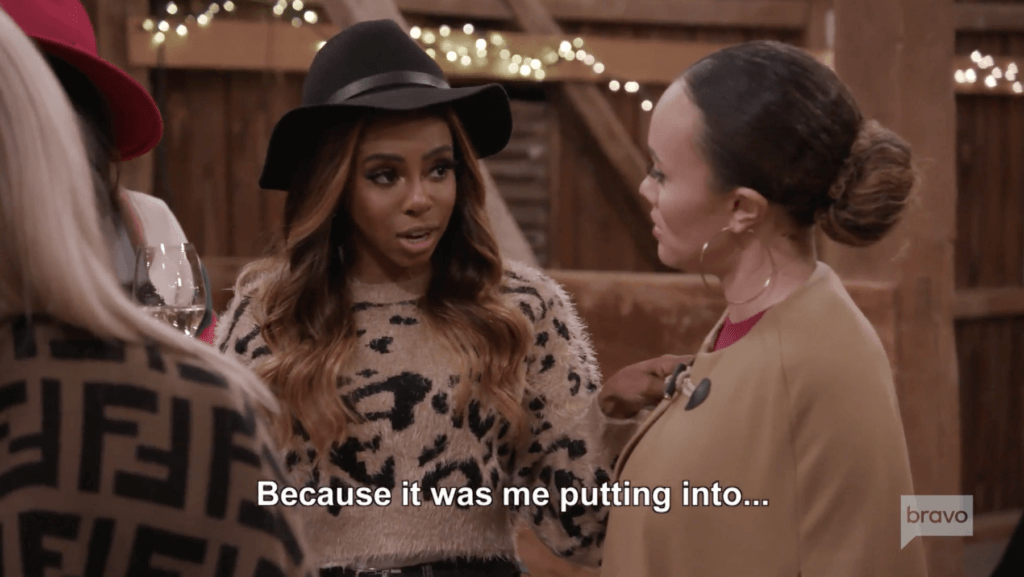 In a smart and preemptive move, Wendy snatches the knife from Candiace. Monique claims she was so tired because of all the things she had to do as a mother and wife to get the house ready. She then says Candiace wouldn’t actually understand because she’s not a mom. Candiace then accuses Monique of “mom-shaming.” Monique says it’s not mom-shaming if you’re not a mom. SHOTS FIRED. I REPEAT SHOTS FIRED.

Candiace Dillard starts with the theatrics, spinning around pretending to be Monique. Monique yells at Candiace to get her hand out of her face. Candiace then taunts Monique, “grab me, grab me.” Monique seems willing to make good on the invitation when she flicks Candiace’s hair and all hell breaks loose. The screen goes black as we hear Karen yell “Monique let her go.” We’re then left with a visual of broken glass and red wine on the floor and an ominous “To be continued…”