It’s here. It’s finally here — The Real Housewives of Beverly Hills  reunion via Zoom. I gotta tell ya though if any franchise knows their way around a Zoom screen and a ring light, it’s Beverly Hills. I imagine Andy Cohen briefed them weeks prior and advised the ladies that just because they would be taping the reunion via online meeting software in their respective homes they were still expected to “bring it” to which they all replied, “OH, IT’S ALREADY BEEN BUH-ROUGHT-EN!” And that they did…. minus Kyle Richards who looks like a hybrid between Morticia Adams and a cast member on Dynasty. Hey Kyle, the 2000s called. They want their bump-it back.

Straight out of the gate, the Garcelle Beauvais vs. Kyle Richards beef rears its ugly head and the reunion is off to the races. Kyle feigns crocodile tears as she explains she was stunned to hear that Garcelle called her “unwelcoming” during an episode of Watch What Happens Live. Garcelle takes a moment to try and clarify, explaining that she was nervous and maybe even a bit over-served and Kyle’s name just happened to be the first one that came to her mind. Kyle’s not buying it, however, citing all of the things Garcelle said about in her confessionals. 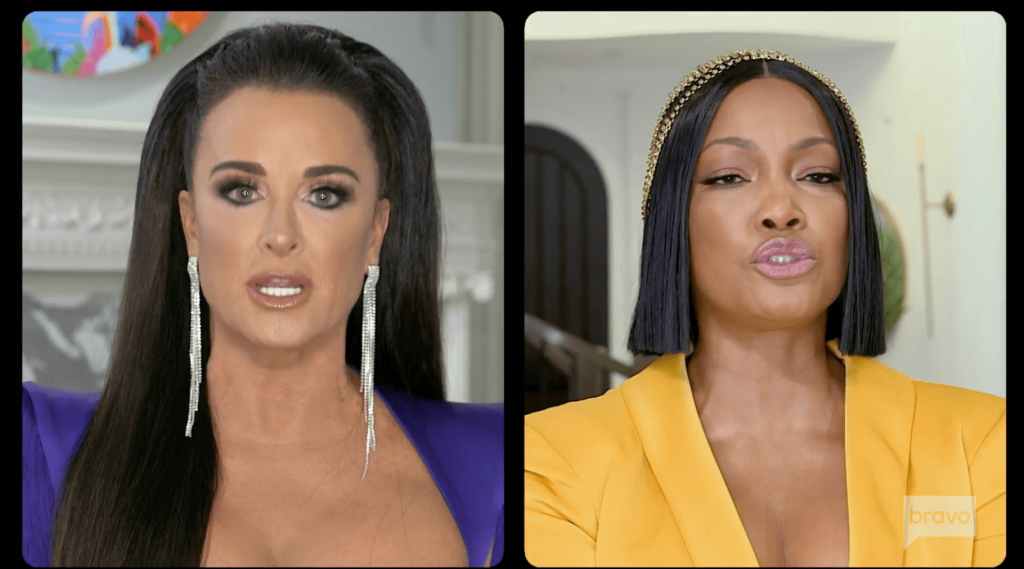 Things go from bad to worse, when Kyle Richards  makes a shocking claim that Garcelle never donated the $5K she pledged at her charity event. Obviously, she’d been sitting on that one for a while and was waiting to pull it out at just the right moment. You know what they say: The devil works hard but Kyle Richards works harder.

Garcelle Beauvais is stunned by the accusation and vows to get to the bottom of it, even wondering out loud if this was simply an oversight by her business manager. Here’s a thought Kyle. Maybe next time, call your castmate up and just ask her if there was a mix-up regarding the non-payment before assuming that she was only making a charitable contribution while the cameras were rolling for appearances’ sake. But I digress…

Next up on the chopping block: Dorit Kemsley vs. Sutton Stracke. Dorit immediately bends the knee and admits that she handled the altercation with Sutton after the DNA party terribly wrong. It appears Sutton, however, is looking for a fight and she’s not willing to “let the mouse go” just yet. Eventually, the two reach an impasse of sorts and all seems well in the world again. 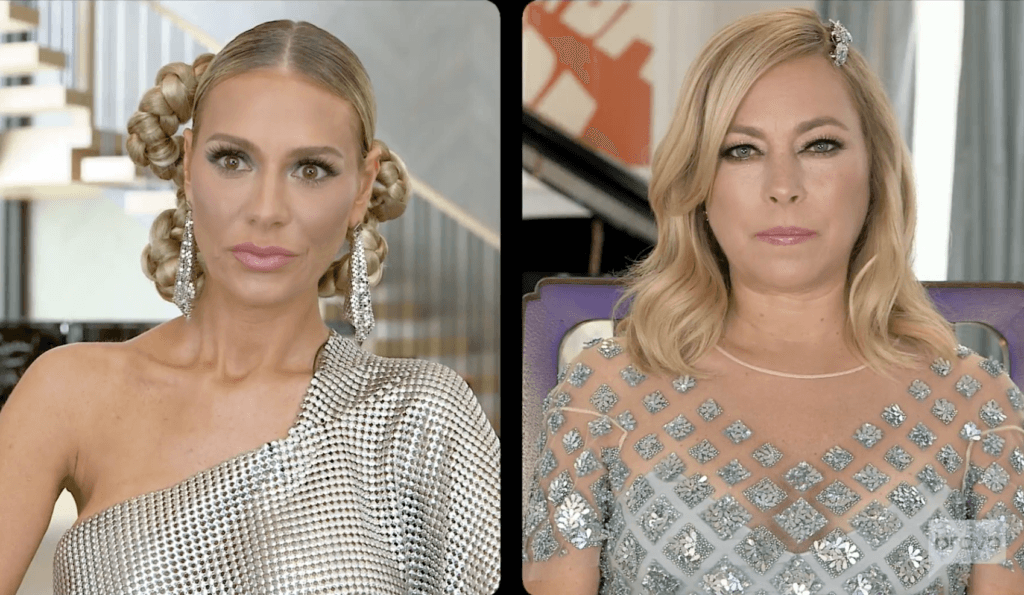 Of course, it wouldn’t be an episode of Real Housewives of Beverly Hills without Teddi Mellencamp inserting herself in drama she has no business being a part of. Clearly, she’s been waiting all season to admonish Sutton for calling her boring and making fun of her “cute black romper.” While I’ll admit that I’m a sucker for a black romper, I think everyone can agree that Sutton was dead-on in her first impression of Teddi being a big, fat snoozefest. Instead of apologizing for making fun of a pregnant woman’s wardrobe, Sutton doubles down and asks Teddi, “Are you going to let my small disdain for your clothes get in the way of our friendship?” And that my friends is precisely why we need Sutton to become a full-time castmember… like yesterday.

Now, for the fireworks show, Denise Richards vs. everyone else because she would rather not discuss threesomes with her girlfriends within earshot of her daughters. Andy immediately calls Denise out for her apparent lies throughout the season.

Erika Girardi then piles on, lecturing Denise for what she perceives as Denise Richards singling her out for her dirty talk at the dinner part. She says she was willing to play along until she realized Denise brought it up again and again to the other girls and that’s when the gloves officially came off. 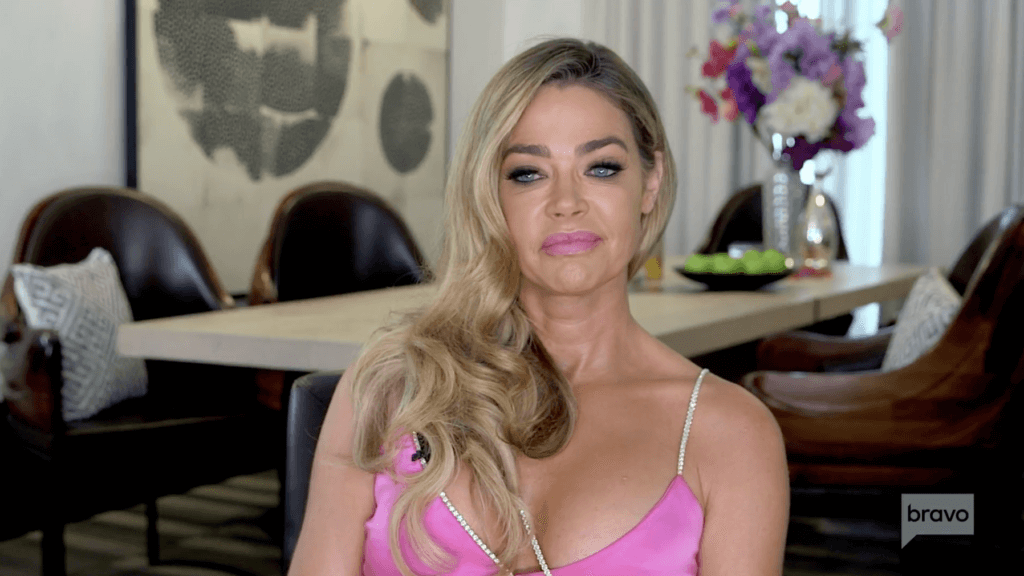 Forgive me here, but if Denise brought it up to the other ladies as well doesn’t that mean that Erika wasn’t in fact singled out, but rather just the first one she spoke to about it? And let’s be clear, at no point in that coffee shop convo did it appear that Denise was calling Erika out on the carpet for her wrongdoings. In my humble opinion, it felt like Denise was trying to have a genuine and earnest conversation with her girlfriend about a situation that left her feeling some type of way. But maybe that’s the problem.  Erika has admitted time and time again that before joining the group she’s never really had any girlfriends. You know cause she’s “cold as ice.” Blah, blah, blah.

Erika Girardi then seizes the moment to pivot and try to persuade Andy Cohen and the rest of the ladies that her comments about Denise’s girls in which she accused them of already participating in threesomes, was actually a blanket statement about teenagers in general — not Denise’s daughters specifically. LOL. Sure, Jan. 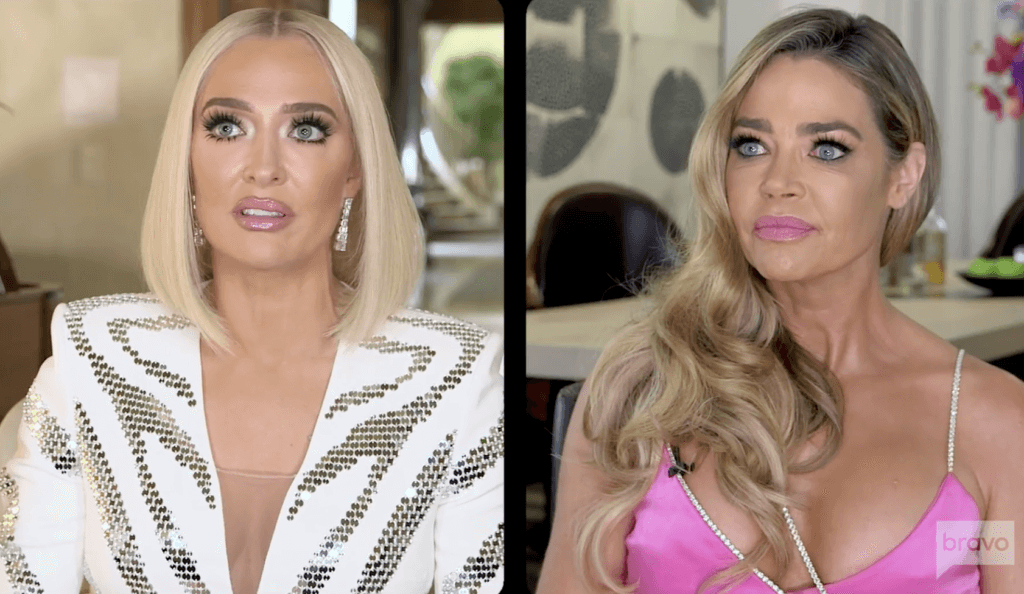 Lisa Rinna and Denise Richards finally go toe to toe with one another about a tweet that called for Lisa to be fired and Denise liking said tweet. Denise maintains that she only liked it because of what it said about Erika talking about her daughters. Anytime there was a lull or an awkward pause in the conversation Lisa would shout out the term “gaslighting” at random. Did Lisa Rinna just learn this new word right before she signed into the Zoom or…? Maybe her daughters should have had her practice using it in a sentence first. 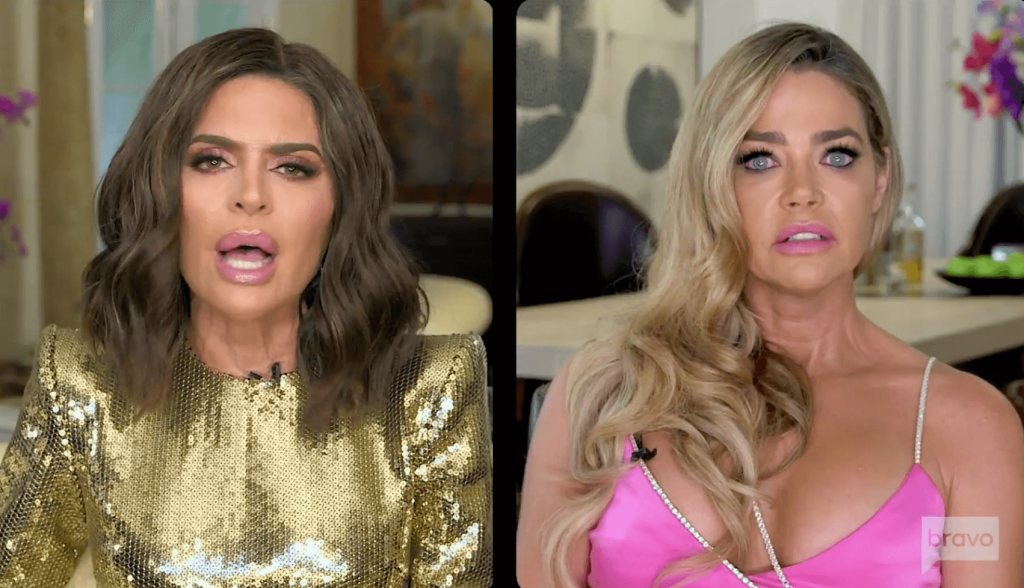 And there ya have it, folks. Real Housewives of Beverly Hills reunion part one is a wrap. Tune in next week as the reunion continues!