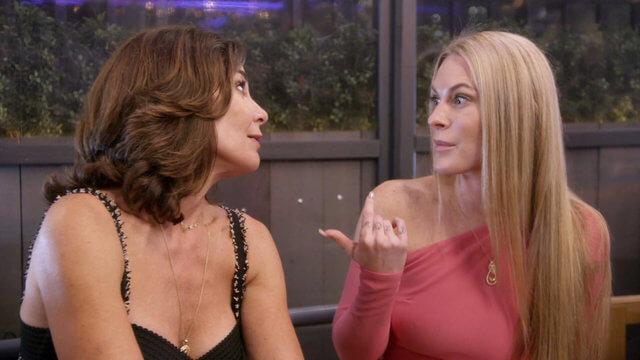 Leah McSweeney took aim at her Real Housewives of New York City co-star, Ramona Singer, while delivering a Cameo message to a fan — and now Luann de Lesseps has landed on the Bravo rookie’s hit list. The Married to the Mob founder revealed that the Countess once moved in on one of her make-out partners, while she was in a bar bathroom.

Viewers know the the RHONY cast is famous for passing around men. UES fixture, Harry Dubin, Luann de Lesseps’ ex-hubby, Tom D’Agostino, and a St. Barts “pirate” have all had experiences with more than one RHONY cast member.

Leah McSweeney is now busting Luann de Lesseps for swooping in on one of her guys, while she was in a bathroom.

“You and Lu are the best duo, you embody women supporting women,” Leah read from the Cameo request before dishing —  “[Luann] did make out with a guy that I was making out with while I went to the bathroom at a bar… but I love her anyway.”

Twitter users noted that Leah McSweeney  spilled the tawdry tea while hanging out with her 12-year-old daughter.

Elyse Slaine clarified her own original message to the Cameo request on social media, after Leah stepped in and stole the show.

“On the Cameo, I actually was referring to Ramona Singer saying she can’t meet a man because she is the 1%,” she told a fan on Instagram. “The rest of the Cameo was a surprise and was never meant to be seen by anyone other than the person who bought the Cameo.”

The Real Housewives of New York City airs on Thursday nights at 9 pm, ET, on Bravo.