This week on the Real Housewives of New York City, we open with Ramona Singer digging through her closet to find something to wear to Leah McSweeney’s Married to the Mob anniversary party. She pulls out a pair of shiny pants and shows them off to her dog for approval. Should she wear it with the suede heels? While she’s deciding, we see a flashback of Ramona Singer buying a sweatshirt from Leah. And she paid retail! And there’s a pot leaf graphic! Who is this Ramona?

Sonja Morgan spends her morning in a small apartment, bossing an intern. She’s flown her old assistant in from Mexico to stay at the townhouse so she can receive all of Sonja’s deliveries for her clothing line. Oh, and she’s updating Gray Gardens in order to find renters. Apparently, Sonja Morgan isn’t the only family member who likes to squat and pee where she will. Her dog does, too. So, Sonja has to lay out wee wee pads for her incontinent poodle before she leaves for the day.

Over at Dorinda Medley’s apartment, she and her domestic, Len, have put up a pale pink Christmas tree. Taking a break, Dorinda calls Luann de Lesseps to see if she got the invite to her upcoming birthday party? Yep, Lu will be there.

And speaking of Luann, she arrives at Ramona’s place with lunch. They discuss the recent cast trip to Mexico, where Ramona sent a text message about anger management to the group though it was clearly meant for Dorinda alone. When Lu spoke to Dorinda about attacking her early on in the trip, Dorinda shut Lu down. Now, Lu feels unsettled about where things stand between them. 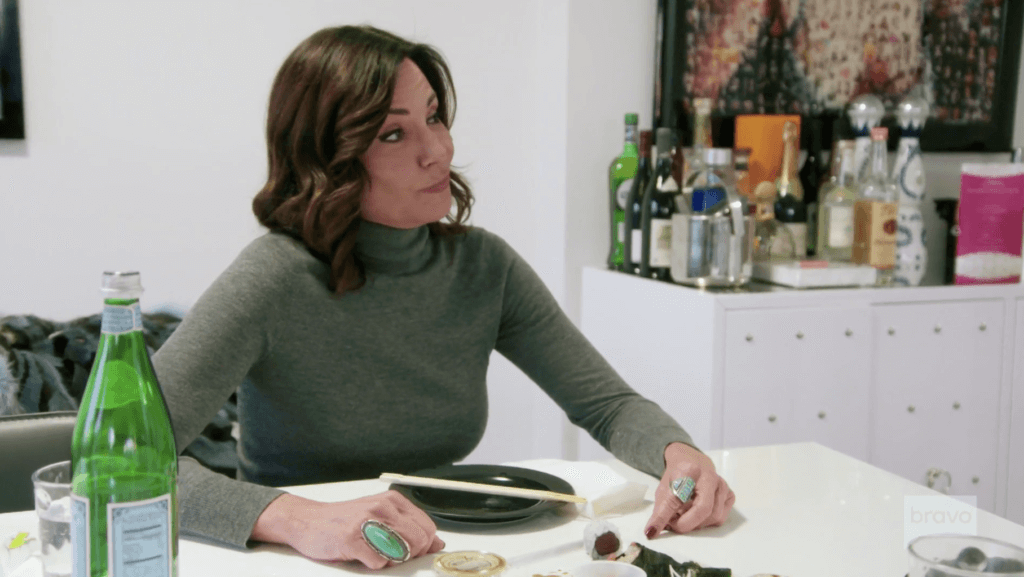 Ramona and Lu think Dorinda is too defensive and wonder where this unknown anger is stemming from. Ramona doesn’t think it’s healthy to be around that kind of rage.

Then Lu gives Ramona a heads up that Elyse has been invited to Leah’s party. Elyse has been hanging with the women most of the season, but she was missing out on the trip to Mexico. That’s because Ramona now has beef with her old friend. She even warned Leah not to invite Elyse, but hey, this is Leah’s party. She can invite anyone she wants. Ramona’s not the boss of her!

Luann de Lesseps wants to know why there’s so much tension between Elyse and Ramona. At first, Ramona refuses to answer and tries to flee by going to the restroom, but she eventually comes back and tells Luann that Elyse isn’t a girls’ girl. Ramona brought Elyse into the friend circle and then Elyse paid more attention to the other ladies. She’s a friend jumper. Ramona is disgusted by Elyse. Disgusted! 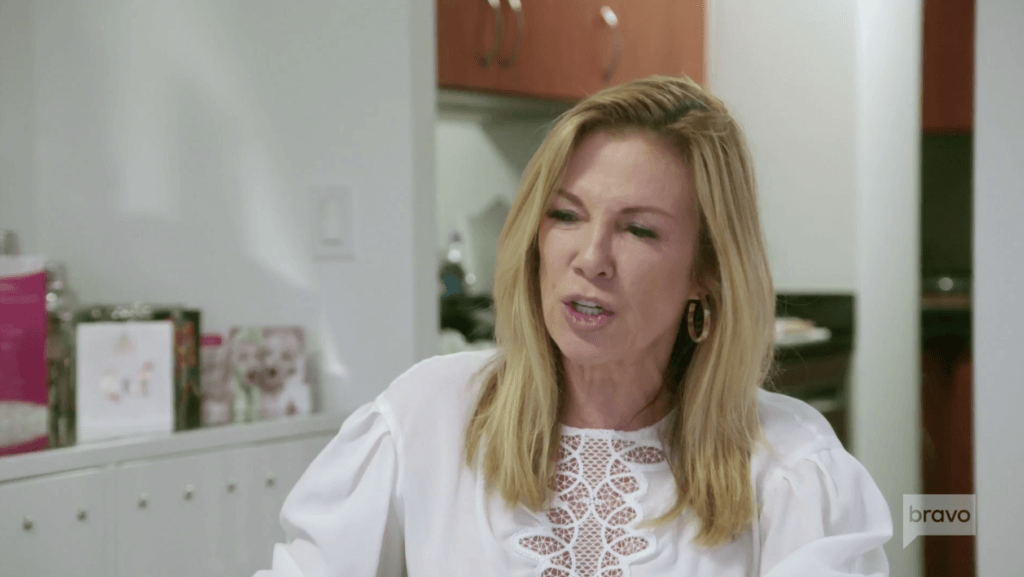 The night of the party arrives. Leah’s sister and her friend ride shotgun as she reviews the venue. She’s worked on her brand for fifteen years, and she’s down to celebrate. Rob, her baby daddy, is on hand. This isn’t going to be an uptown, swanky do. The women aren’t going to feel at home without caviar and champs. Too bad.

When Dorinda Medley arrives, she’s shocked to see the other guests in sweatpants. Did they just roll out of bed? No, Dorinda. This is what Leah sells.

Elyse Slain arrives and she can’t understand why Ramona is icing her out. Elyse doesn’t know what’s she’s done to offend her old pal. As usual, Elyse’s problems are boring, and when Leah’s mom, Bunny, turns up, we’re mercifully saved from having to hear more from her. 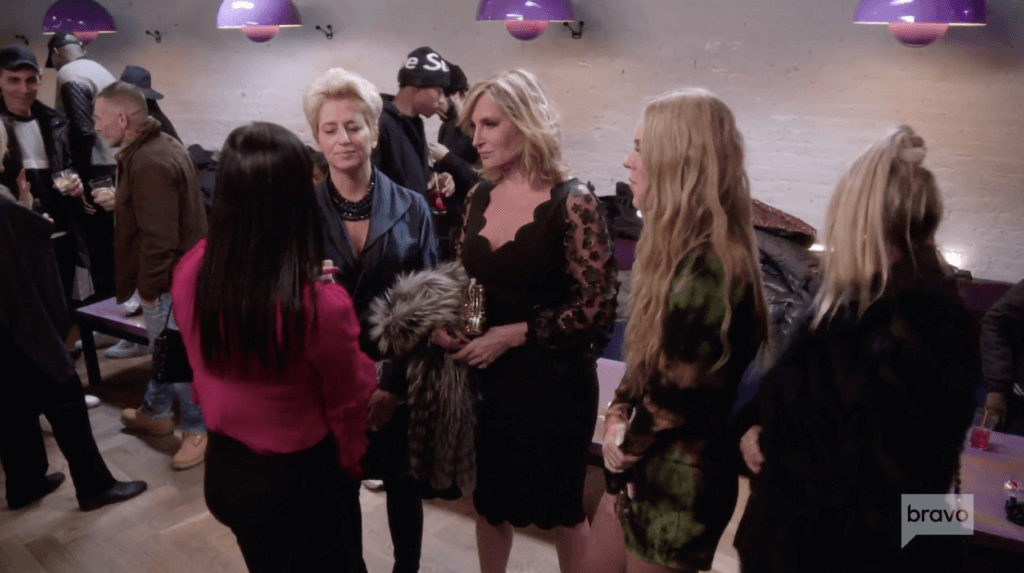 Dorinda sees a lot of her own mom in Bunny. Dorinda says their mothers love them and allow them to be themselves. I’m not sure how much of that is true in Bunny’s case. She’s admitted to not liking Leah or Sarah very much, nor does she like to tell the girls she loves them.

Luann comes strutting into the bar in a mottled faux fur jacket. She’s wearing a top of white fringe underneath. When she shimmies out of her coat, she has no idea where to put it. Where’s the coat check? Not here! This is a downtown party.

Dorinda claims she and Luann are the only two dressed up. But Lu gets it. MTTM is a street brand. Get with it, D!

Sonja shows up and gingerly makes her way down the many, many steps. She stops and speaks to one guy, telling him not to be frightened. She’s just a friend of Leah’s. Then she sidles up to the bar, throws her hands in the air, and declares, “Where do I start? Hot guys!” One turns and embraces her in a bear hug. Oh, Sonja. You loveable tramp. She’s soon wedged on a couch full of men. She says she’s an uptown bitch. Like grandma! And the guy next to her bursts into laughter. But at least these guys are legal!

Ramona finally shows up. She tells us she’s not going to indulge in bullshit. And I assume she means Elyse. Ramona hugs Bunny as Elyse slips her way next to Ramona. Ramona is her normal rude self and refuses to even speak to Elyse. Instead, she turns and walks away.

When Elyse tries to pull on Ramona’s arm and asks her to speak, Ramona says she doesn’t even know who Elyse is anymore. Leah urges Elyse to run after Ramona and confront her. 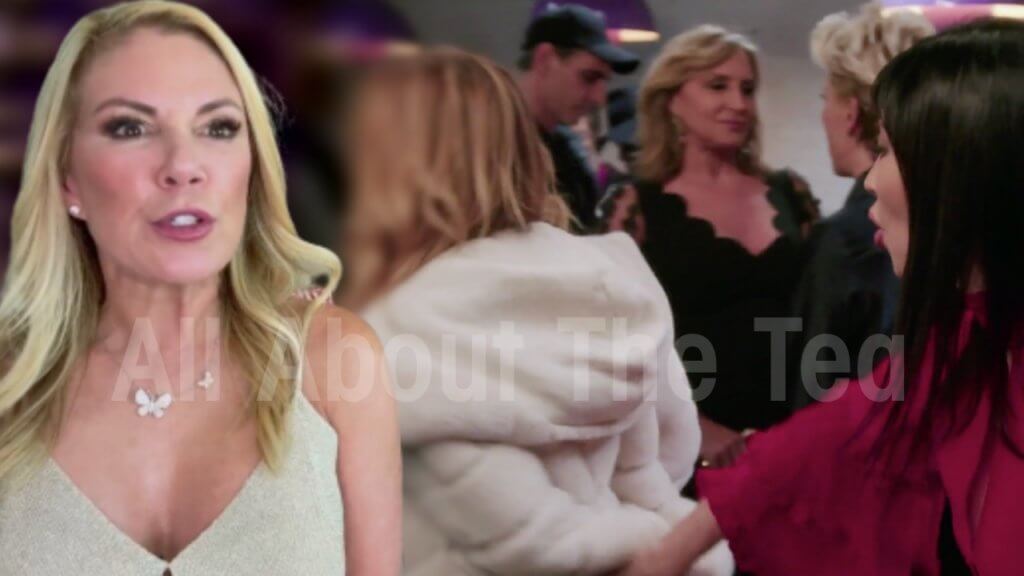 Elyse follows Ramona, calls her duplicitous and nefarious and a superficial bitch. Ramona calls Elyse evil and stomps back up the stairs toward the exit. Leah follows and begs Ramona to stay, but Ramona never turns around. Back in the club, Elyse unleashes her grievances.

Sonja is having the time of her life. One guy says he drank Captain Morgan last night. Sonja raises her glass and says, “You have Lady Morgan right now!” She’s finding the mix of people “real.”

Leah McSweeney gives a speech with her mom by her side. She thanks Rob for helping her start MTTM. She acknowledges her sister, Sarah, and gives her fifteen percent of the brand. Then she hands the mic to Bunny. Leah’s mom admits to being proud of Leah and admires her daughter’s work ethic. Leah finally feels like her mom approves of her.

The ladies all have table service and toast to Leah. Then they dance and party the night away.

It’s a new day, and Luann heads to a coffee shop. She facetimes Ramona and asks why she left the party. Because of the negative energy, of course. Elyse is nothing but negative and aggressive and manipulative. How? Well, Ramona can’t really give any particulars, but she feels strongly about it. 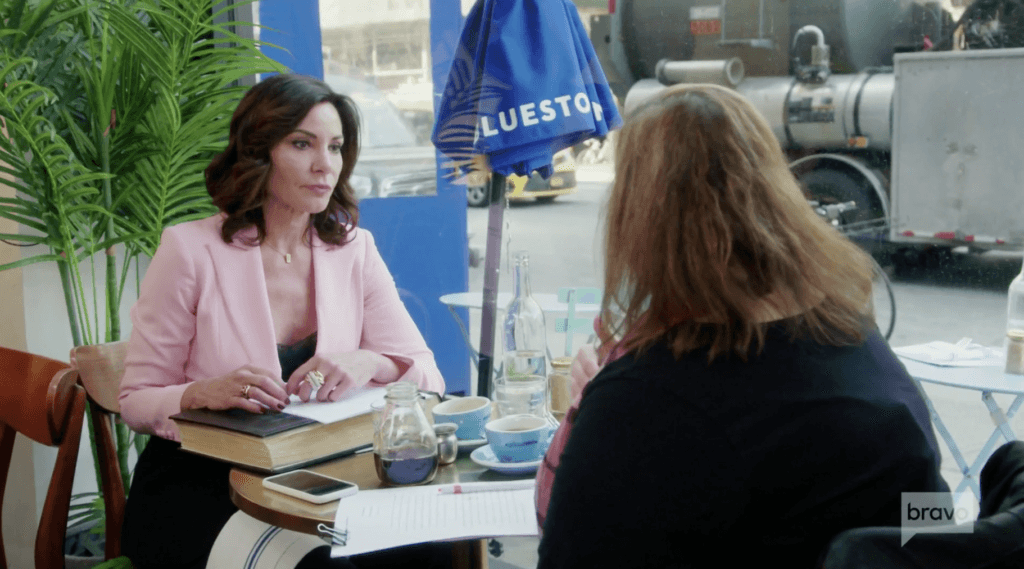 Luann is meeting with a writer who’s helping her write an autobiography. Lu wants to shed a light on her life, including her teen years, where she had to wear polyester and shop at Payless. But hearing about Lu’s dad and his own incarceration is a surprise. Meanwhile, Ramona is still on the phone because she can’t figure out who to turn it off. Plus, she likes to eavesdrop. 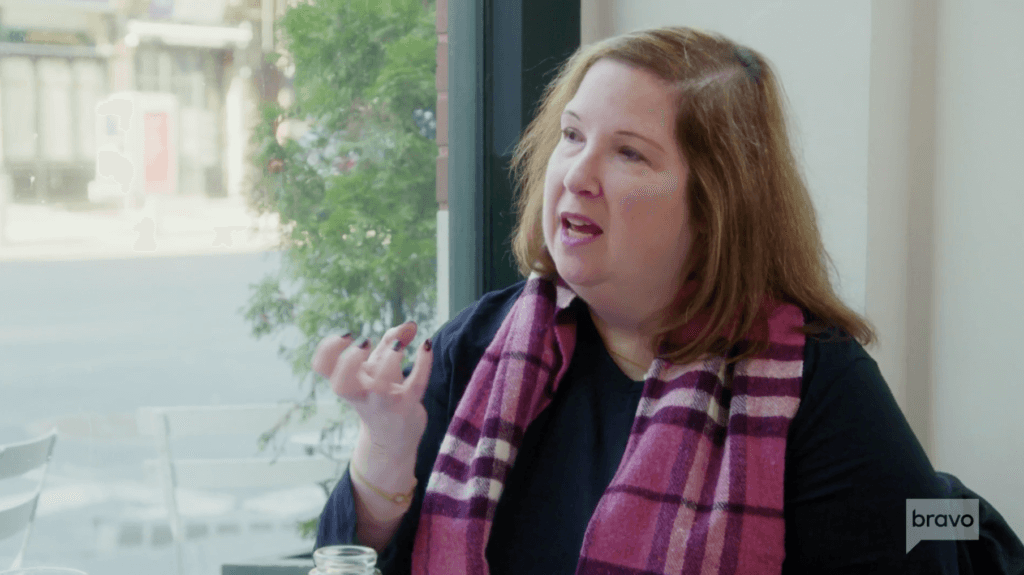 After Ramona clicks off, we find out Luann’s dad was an alcoholic who had a bad ten-year run. Once Lu was arrested, she finally understood her father. She tears up and tells us how much she still misses him. Her dad finally stopped drinking, and she gets his struggle. Getting knocked on her proverbial ass has taught Lu how to build herself back up and find her confidence again. This is the Luann I love. Gutsy and fun and vulnerable. She says she’s done a ton of soul searching during the past couple years, and she’s ready to be back on top.

Dorinda yaks on the phone as she discusses her birthday dinner. She’s invited real friends only. Unlike Ramona. And she’s having it at a Russian bar. Old New York vibes complete with vodka and caviar. Now this is where Dorinda feels at home.

Dorinda has invited John. He stopped by church to surprise her recently. She misses him, wants him as part of her life, but she’s glad to be single. She’s more peaceful now.

Party time! Lu rides with Sonja in a vintage car, and she’s wearing a Sonja Morgan outfit. They discuss Leah’s party and what a good time they had. Then talk turns to Elyse. They can’t figure out why Ramona can’t have a convo with people. Why does she always have to run away? At the Samovar, they meet up with Hannah, Dorinda’s daughter. Remember Dorinda’s afghan pants from last week? Well, Hannah’s wearing Granny’s blanket as a coat this week. Now that’s what I call sustainable! Leah shows up and greets everyone. Sonja raves about Leah’s party, and Leah wonders if she’s supposed to bring a drag queen to Sonja’s upcoming bingo shindig. Nope, just dress like one.

John has arrived and is chatting quietly with Lu. Then Colin Cowie wanders in with his adorable fiancé. Finally, Dorinda comes in and doles out hugs and kisses. Ramona is late, but just in time to settle down at the long table. She doesn’t understand why John is here. Is Dorinda trying to send mixed messages?! 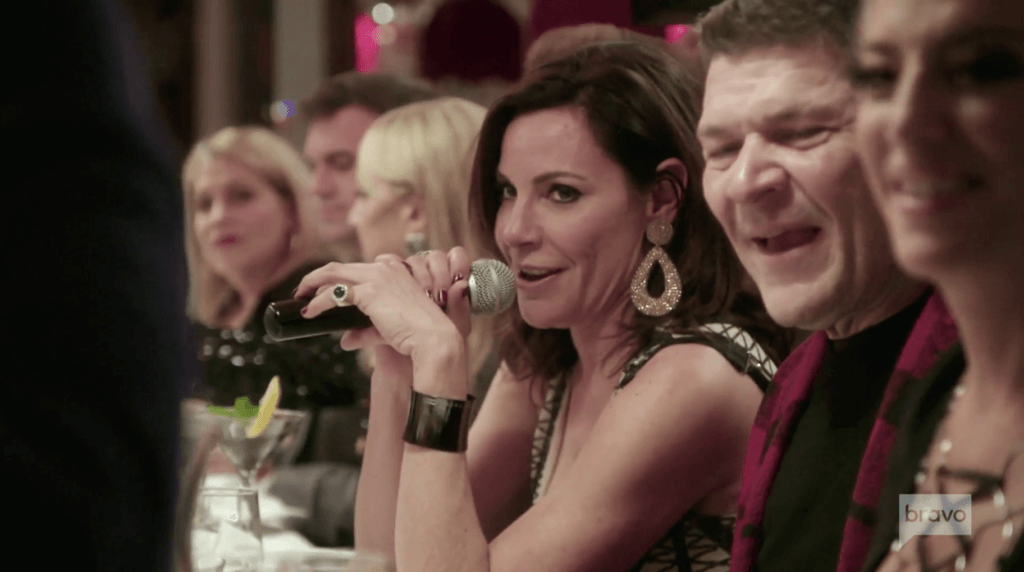 Leah tells us that Ramona called the day after her party to apologize for scampering away like a frightened rabbit. But Leah couldn’t care less. She had her fun night with her people, and she’s okay with Ramona bailing. Ramona mentions Bunny and how surprised she was. Bunny’s really smart — not at all like Ramona thought she’d be. She expected Bunny to be a simple person. Um… Leah thinks Ramona lacks even a scooch of self-awareness. Even her compliments are shady.

At the Samovar, Dorinda gives a nice speech. The group toasts to her and the food is served. Dorinda looks at Sonja’s phone and scolds her about all of those open apps which are sucking power. Lu takes offense, because they’ve already decided that being on the phone at the table is very rude. She tells Dorinda to get off the phone! But hey, this is Dorinda’s party. Stuff it, Countess! 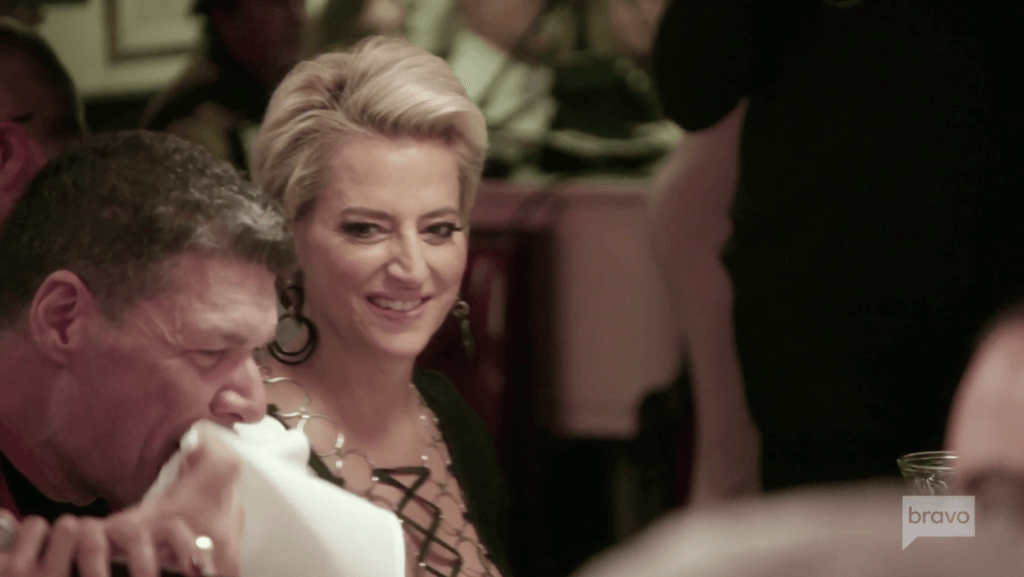 Dorinda defends herself as only Dorinda can — by snapping. Ramona tells Dorinda not to yell at the table, but Luann isn’t gong to let it go and reiterates that phones should not be viewed at the dinner table, damn it!

Ramona tells Colin, who’s sitting next to her, that Dorinda is an angry being. She wants to help Dorinda calm down and be happy with her life. He just passes her the borscht.

John moves to stand next to Dorinda and makes a speech. He gives a lovely toast to Dorinda and kisses her cheek. She’s glad they’ve moved onto the friend stage and says he’ll always be family. 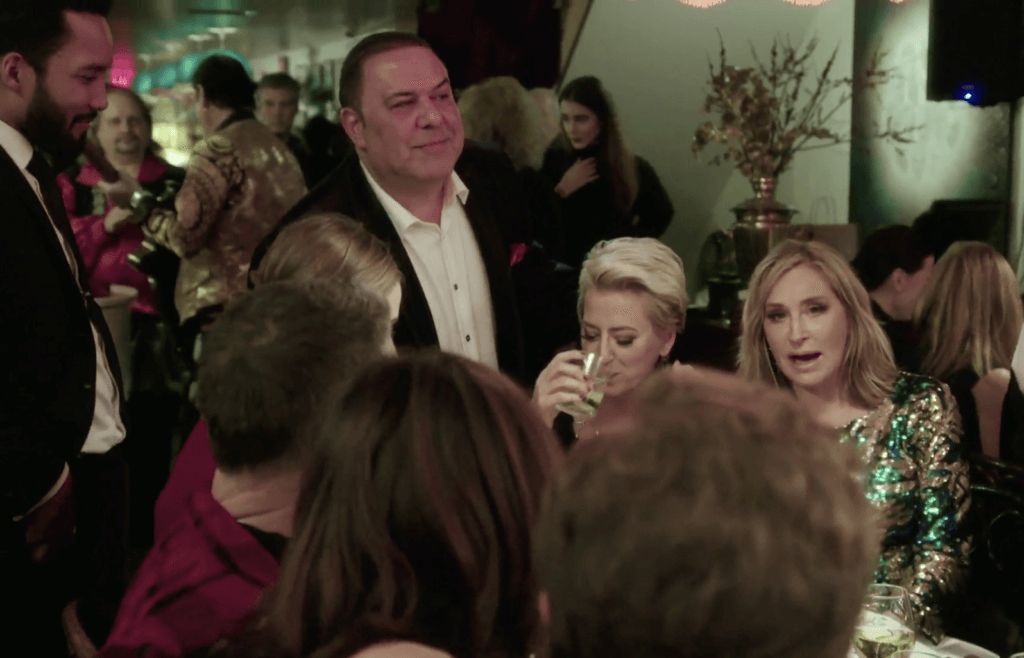 Luann stands and she suddenly pulls a microphone from her cooch (or somewhere) and tells the story about how she and Dorinda first met. It was at a bar mitzvah, where they took to the dancefloor and have been friends ever since. But that’s not all! Lu starts talking about her life, the life of women, the cute men at the table. Even Sonja says Lu is being a diva by hijacking Dorinda’s party to make it all about her own journey.

Press play below to watch All About The Tea’s LIVE Real Housewives of New York City on YouTube. Subscribe to the channel!

And that ends our episode. So, was Luann out of line with her long speech? Why does Ramona run from confrontation? And was Leah’s party real enough for ya?