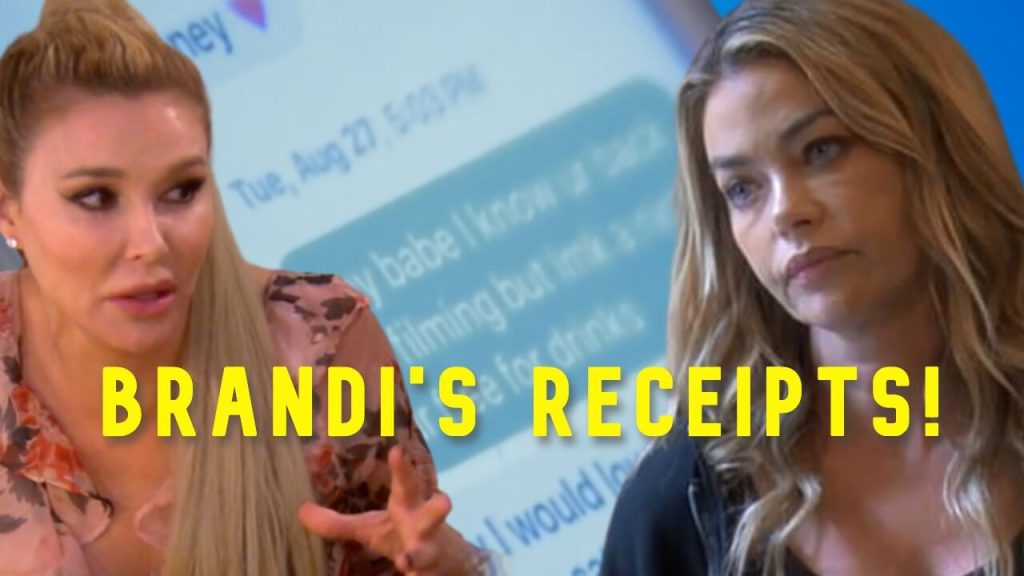 The Real Housewives of Beverly Hills is about to wrap Season 10 — but Brandi Glanville has promised that the finale will be a doozy.

Brandi Glanville revealed text messages exchanged with Denise Richards during Teddi Mellencamp’s baby shower on last week’s episode, hoping to prove that she shared an intimate friendship with the actress. Denise denied Brandi’s claim that the duo had hooked up, and that her marriage was open to outside trysts — but Brandi dished on Twitter that viewers would see more proof exposed on the show.

“[There] are two years worth of texts so just be patient they will all be shown,” Brandi Glanville tweeted. “So As we all know I’m not a producer on housewives I gave them two years worth of text I am not in charge of what they choose to show I know that more text will be coming out Have a beautiful Thursday.”

Dorit Kemsley shared that she initially found Brandi’s story hard to believe and supported Denise because of her emotional reaction to the alleged affair reveal.  She also noted that she Denise was “very supportive” during last season’s “Puppygate” debacle.

“On the flip side, how can someone make up this big story?” Dorit said. “Only really do we find out at the baby shower, they have this year long correspondence.”

Fans know that Denise claimed that she had not spent much time with Brandi, and that the pair had not communicated regularly.

“When Brandi showed us her phone at Teddi’s baby shower, you could clearly see there was a friendship between she and Denise,” said Erika. “There was a history fo communication there.”

Erika and Dorit continued to point out discrepancies in Denise’s story, including her past claim that she was still close to Brandi, which Denise revealed during a panel chat at BravoCon.

“At BravoCon, Denise said she thought Brandi was a straight shooter and something else about knowing her. But then in Rome, ‘I barely know that woman,'” Erika noted. ”Then we sit with Brandi, she opens her phone and gives is to us, you can see that they clearly were talking and they had a friendship.”

“I hadn’t read all the messages, there’s too many, but I know they definitely showed they had known each other for a while and had a lot of correspondence,” Dorit said, adding, “which was different to what Denise had said in Rome.”

Teddi Mellencamp said that the texts only confirmed what she already knew — that Denise and Brandi “have a friendship, a relationship of some sort.”

Kyle Richards added that the nature of their relationship was none of their business, but that “everything made sense” after seeing the text exchange.

Kyle Richards said the texts only proved that “we were getting this censored version of Denise,” who she believes was “presenting to you what she wants people to see … instead of being genuine and open and being able to have an authentic friendship.”

“For me it just pointed out a pattern when it comes to Denise,” Teddi said. “She comes and goes and disappears depending on where she is in her life.”