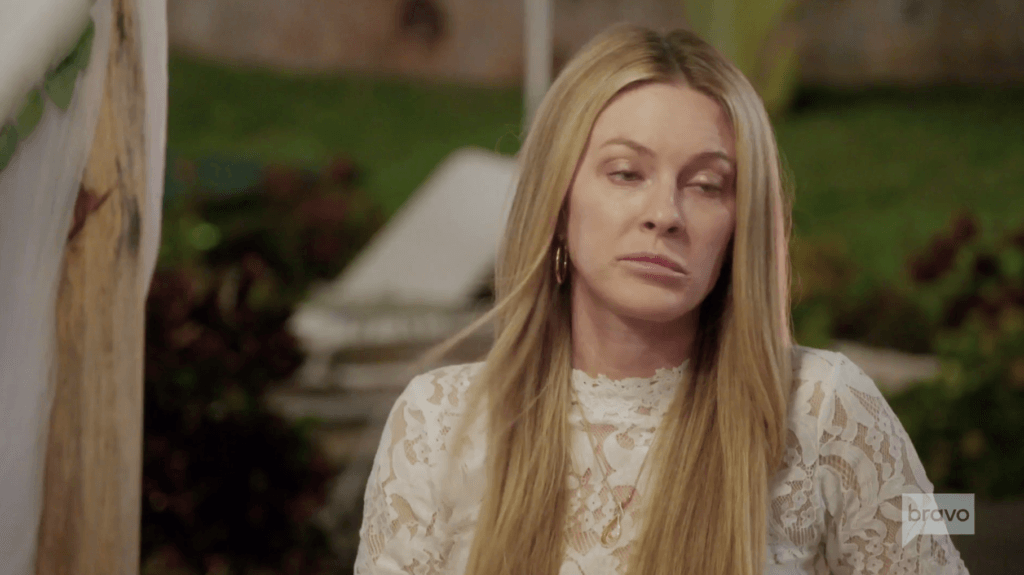 We’re still on our girls’ trip to Cancun on this episode of the Real Housewives of New York City. The ladies are getting ready for dinner. Well, most of the ladies.

Ramona Singer is busy Googling the causes of anger so she can better understand Dorinda Medley’s issues. Dorinda has been quick to fly off the handle this season, first decimating Tinsley Mortimer and then going after Luann de Lesseps and Ramona Singer in turn. 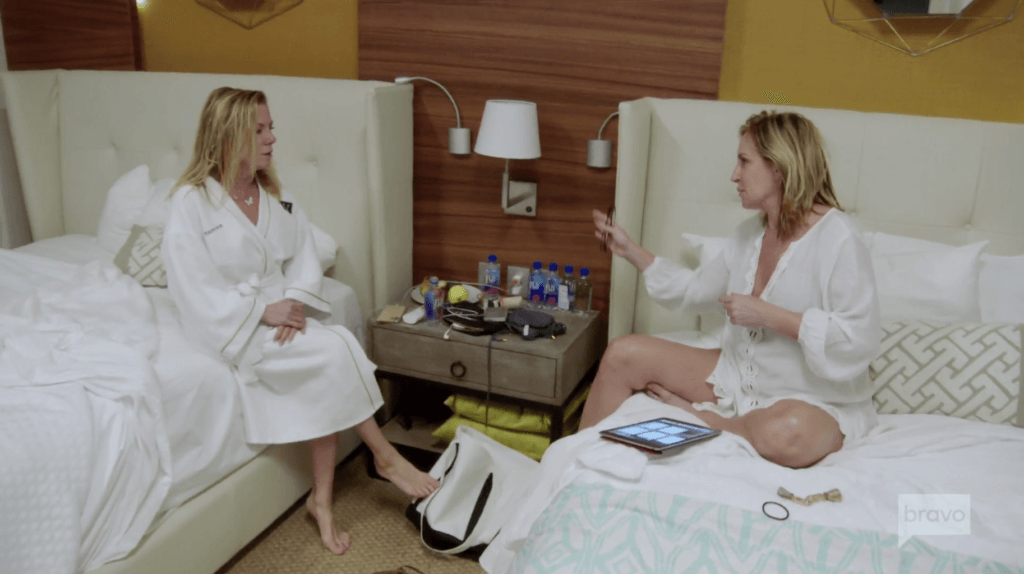 Now, as Ramona Singer  lies in bed chatting with bunkmate, Sonja Morgan, she’s trying to find the underlying cause of Dorinda’s rage. She finds an article and sends it out as a group text. When Lu glances at her phone, she freaks out.

Luann de Lesseps slips into Ramona’s room. Did Ramona mean to include Dorinda on that text? Yep, she sure did. This was the only way she can get Dorinda’s attention. Call me a wackadoo, but I wouldn’t want Dorinda’s attention landing on me. Especially after she has a few drinks under her belt.

And in a move that surprises no one, Dorinda retaliates by sending links from blogs and press sites regaling Ramona’s misdeeds over the years — like getting into an argument with Margaret Josephs or her comments on Sonja’s many struggles. Anything negative Dorinda could find, she adds to the group text. Lu thinks it might have been a good idea to speak privately to Dorinda. By putting it out there to the whole group, Ramona lit a fuse.

Ramona tells Lu to figure it out. She threw the article out there, and now her job is done. Lu rolls her eyes and heads out of the room. She runs into Dorinda on the stairs. Just a side note, Dorinda is wearing pants that look exactly like the afghan my Gammy crocheted back in 1980, but with sparkles. Not kidding.

Dorinda storms into Ramona’s room and offers up a challenge: keep it going, Ramona and see what happens. In her talking head, Dorinda calls Ramona a coward, a rat that only comes out at night. She reminds Ramona that she’s gotten into spats with several other Housewives over the years. 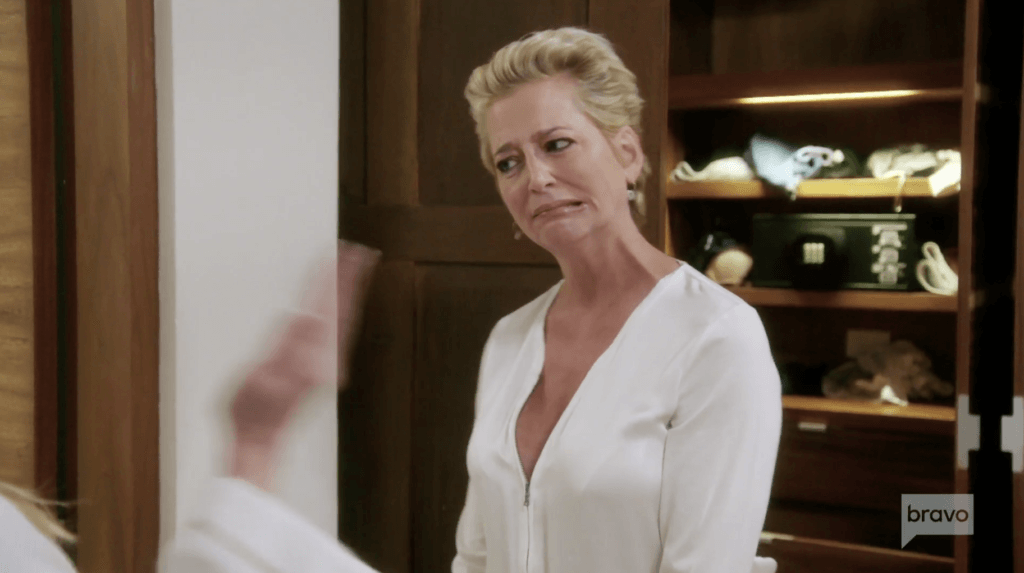 At first, Ramona tries to soothe Dorinda by telling her she’s gorgeous. When that doesn’t work, Ramona says Dorinda is deflecting (except she pronounces it dye-flecting. Ramona is the master mispronouncer. Remember kudooze or re-gay music? I sure do!) Dorinda corrects Ramona’s pronunciation, but Ramona remains unfazed. She says she has the Ramona dictionary, and that’s all she needs. 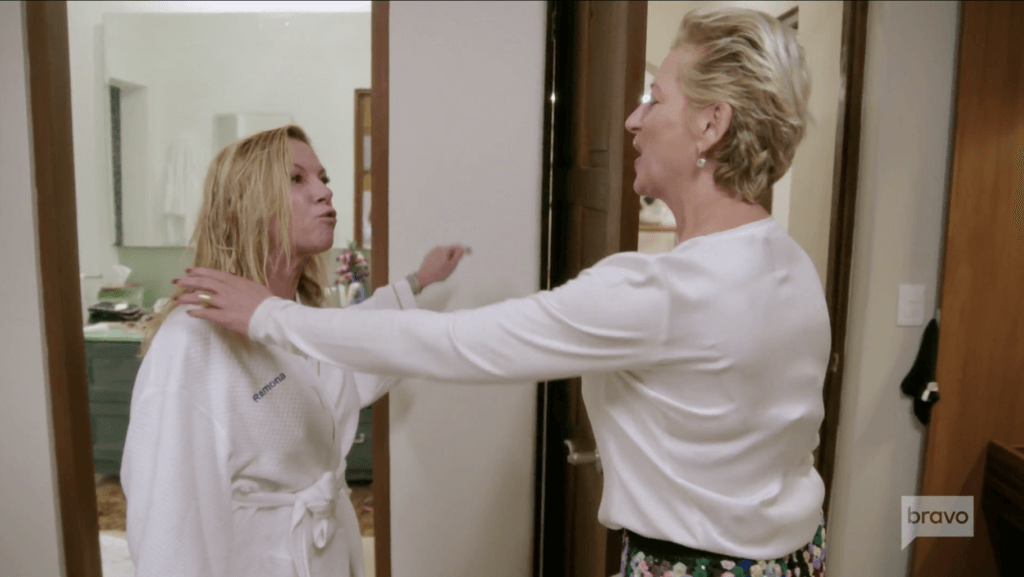 Dorinda offers a zinger, then walks away. But she keeps coming back to continue the argument. Ramona points out that Dorinda made Luann cry by bringing up the arrest. She needs to control her anger. Dorinda thinks Ramona dramatizes things, plus she’s jealous of Dorinda’s life. They go back and forth as Sonja sits on the bed and makes the occasional comment. Lu is waiting at the bottom of the steps, listening to the conversation as it spins out of control.

After Dorinda finally leaves, Ramona paces around the room and rants about how great her life is. Maybe Dorinda is jealous of Ramona, huh? How about that? Ramona dates and is social. Dorinda stays in and is alone, now that she’s broken things off with John. Ramona’s life is fabulous, thank you very much!

But the most amazing thing in this scene is after Ramona stops pacing, Sonja looks on the floor and asks, “Is that poop on the rug again?” Yep! Ramona pooped her robe and it trickled onto the rug. Gross. 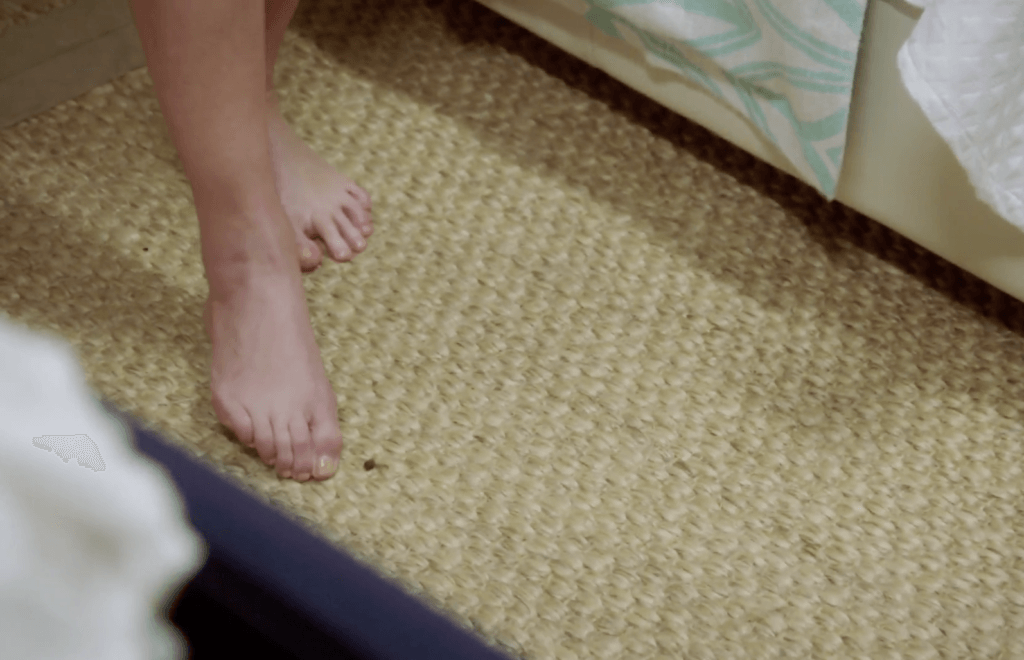 Outside the hacienda, Dorinda sips a cocktail. Luann, in an attempt to lighten the situation, brings out a giant inflatable popsicle and offers it to Dorinda. Lu urges Dorinda to have a simple conversation with her. As Luann tries to explain how she felt when Dorinda attacked her a few days earlier, Dorinda can’t hear it. She says she gives and gives, like her house in the Berkshires, planning this trip, but no one appreciates her efforts. Dorinda thinks Luann is a hypocrite. She’s done too much for Luann, and this is what she gets in return?

Luann just wants to be heard and acknowledged at this point, but Dorinda feels attacked and singled out. She’s super defensive and won’t discuss the matter another minute.

Leah McSweeney finally steps into the garden. She sits as Luann tries once again to get her point across. She didn’t bring up Dorinda’s drinking, Ramona did. But Dorinda sees this as moving backward, and she’s not about that.

Leah tries to play peacemaker. Luann explains how she was the messenger who got attacked. Dorinda is now backed into a corner. She apologizes, not really hearing what Luann is saying or the hurt behind the words.

Ramona and Sonja make it downstairs, and the women settle around the table. Dorinda asks Leah about whether she has business partners and how she got into the fashion business. Meanwhile, Ramona is harassing the server about her wine being room temperature and the fact that it’s old. She takes a sip and rejects the red, making the server bring another bottle. But it’s cold, too! 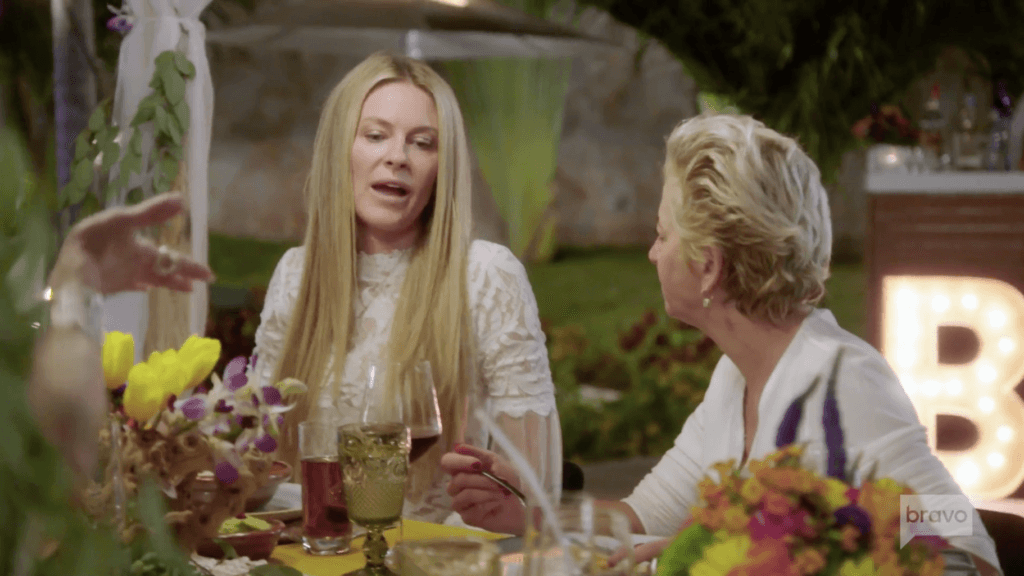 Sonja and Luann take Ramona to task. Leah comments that Ramona really likes to complain. Sonja thinks Ramona wants attention — and that’s why she sent a group text. Wait, what? Leah didn’t receive a text and wants to know why she wasn’t included.

Sonja hands over her phone for Leah to read. Leah starts laughing at the content, but is still feeling hurt that she was left out.

Ramona becomes ramotional, telling Dorinda that she’s a good friend who’s been there in times of trouble. Sonja, Luann, and Dorinda start laughing at Ramona’s performance. The Stinger whines that she has to walk on eggshells around Dorinda or she’ll find herself on the receiving end of Dorinda’s wrath. And even though the other women feel the same way, they won’t back Ramona’s assertions. 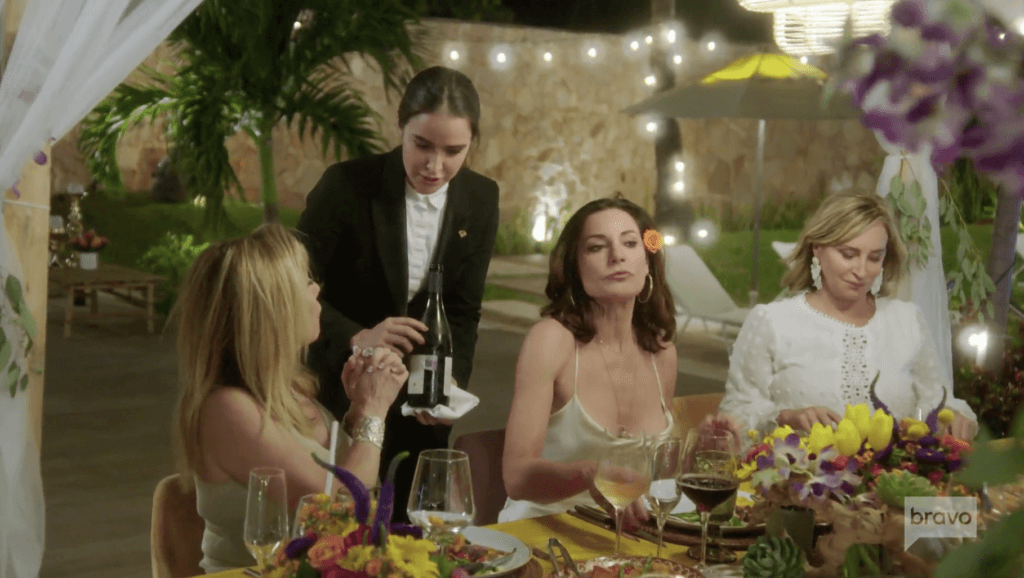 Luann calls Ramona a fake. Dorinda and Ramona rip each other apart, then come to dinner like nothing happened. That’s fake. The fire is still smoldering, but Ramona ignores the fallout.

Dorinda feels that Ramona is being a bad friend, and Ramona insists that Dorinda has become so angry, Ramona’s not sure she even likes Dorinda anymore.

Sonja Morgan points out that Dorinda takes care of everyone around her, but she puts up a façade about her own feelings. Dorinda needs to be more forthcoming about her life, then her anger won’t boil over. Sonja recognizes Dorinda’s anger for what it really is: pain.

The next morning, Lu is already gone and the rest of the women are packing. As they toss items into their suitcases, Ramona commends Sonja for being diplomatic with Dorinda the night before. Sonja thinks Lu should have brought up her own issues with Dorinda instead of attacking Ramona for being fake.

Ramona thinks Lu sucks up to Dorinda because she gets perks from the friendship. Like all those Jovani dresses for free.

Back in New York, Leah meets with her consultants and looks over new merch. She tells us that when she started her company, she envisioned herself flying around the country in a private jet, but she’s had to manage her expectations. She’s done well with Married to the Mob, but not that well. She’s not selling in stores now, just online.

Ramona pays a visit to her shrink. After selling her old apartment, she felt pretty low. She was still reeling from the divorce and upset that she’s still single. Now, she’s realized that she acts differently when she’s around men. To show her psychologist what she’s talking about, she scoots to the edge of the couch, crosses her legs, and flips her hair as she offers up a coquettish smile, then we see flashbacks of Ramona’s flirtiest moments. 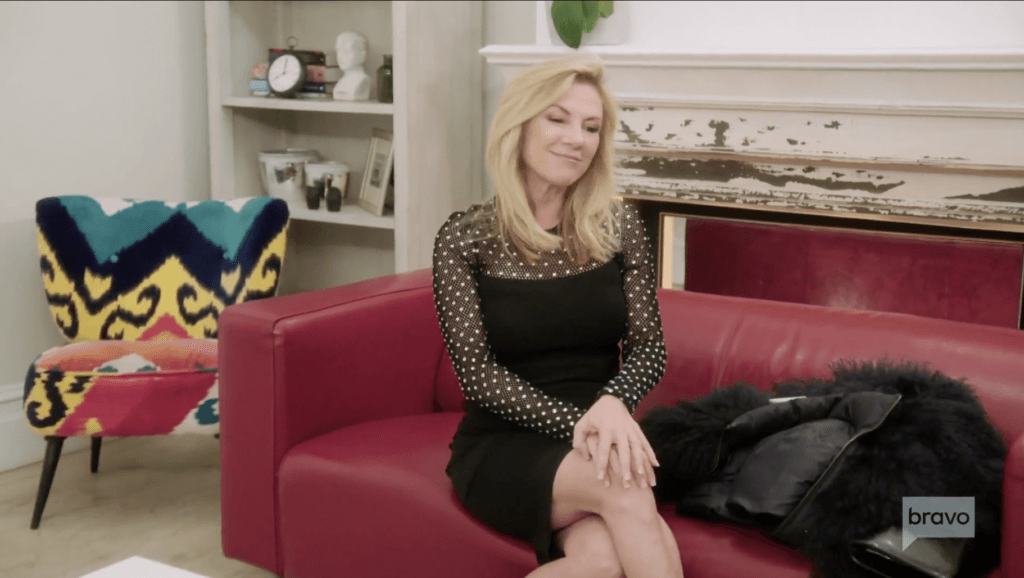 Ramona insists there’s more to her than a sensual woman. She’s a giver and smart and self-made. She’s trying to be herself with men now, instead of projecting the sexual cougar side of her personality. She wants to continue to work on her relationships with her friends. She may want a man, but she doesn’t need one. Her psychologist gives her a verbal pat on the back for having a breakthrough.

Luann is working on her latest cabaret project. She’s in rehearsals and waiting for Sonja to show up. Lu calls Sonja and tells her to get her ass down to rehearsal. But this is the day of Sonja’s launch party for her clothing line at Century 21. Besides, she doesn’t need to practice. She’s impromptu! 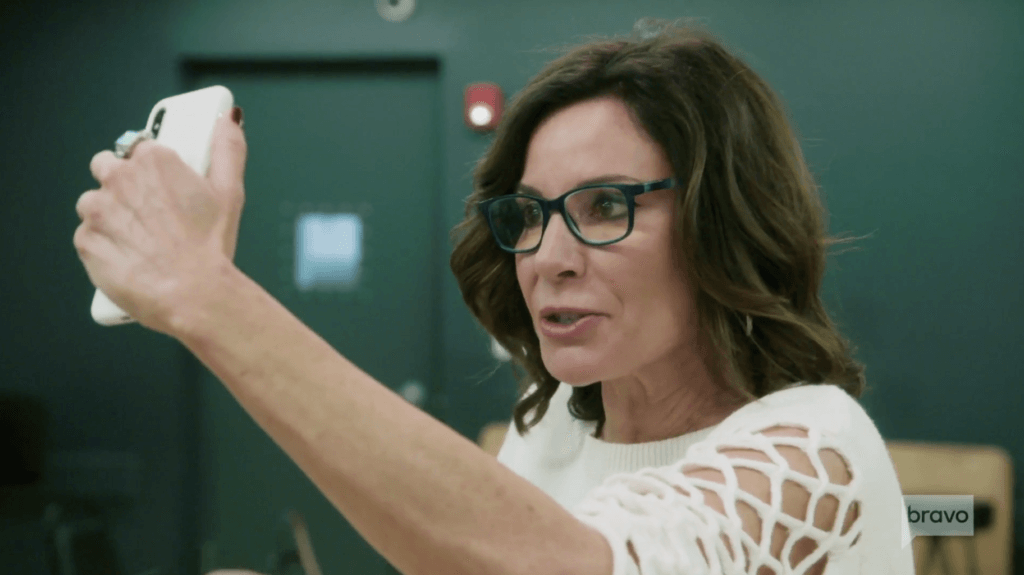 At Leah’s apartment, her mother shows up for dinner. Leah has been having problems with her mom all season, but even so, Bunny spends Tuesday nights at Leah’s place. One of their issues is that Bunny, doesn’t always like her daughters. Leah’s now ready to confront her mom over this.

Bunny doesn’t deny it. She loves her daughters, but she doesn’t always like them. And she hates Leah’s drinking. Leah still feels guilty for letting her parents down when she was a teen. She begins to cry as her mom seems unmoved and continues to shovel broccoli into her yap. 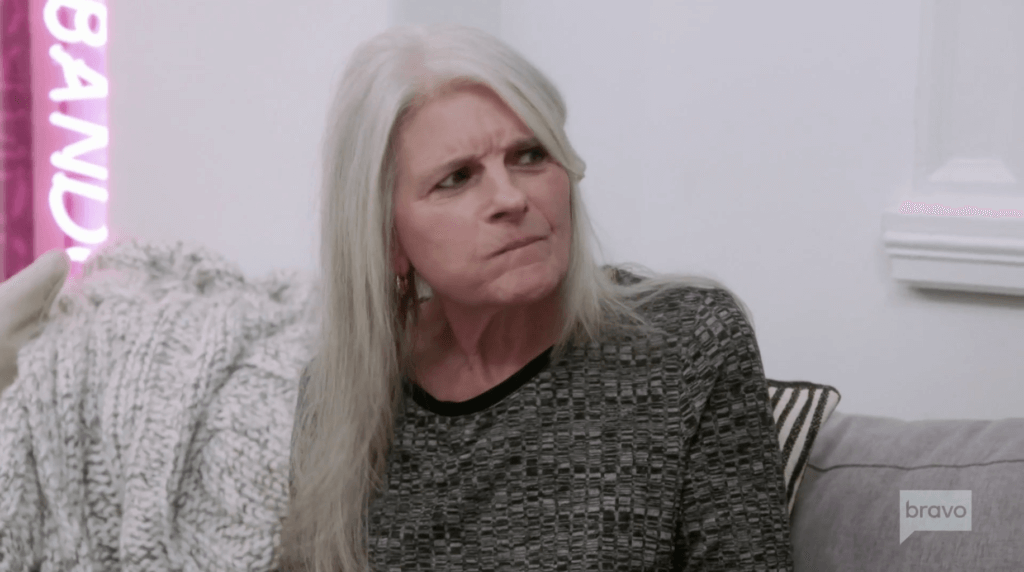 Bunny doesn’t think booze is good for Leah. She wants Leah to be honest with herself. Bunny hasn’t touched alcohol in forty years, so it can be done! Leah begs her mom to say she loves her and is proud of her. Bunny parrots the words but resents having to say it at all. 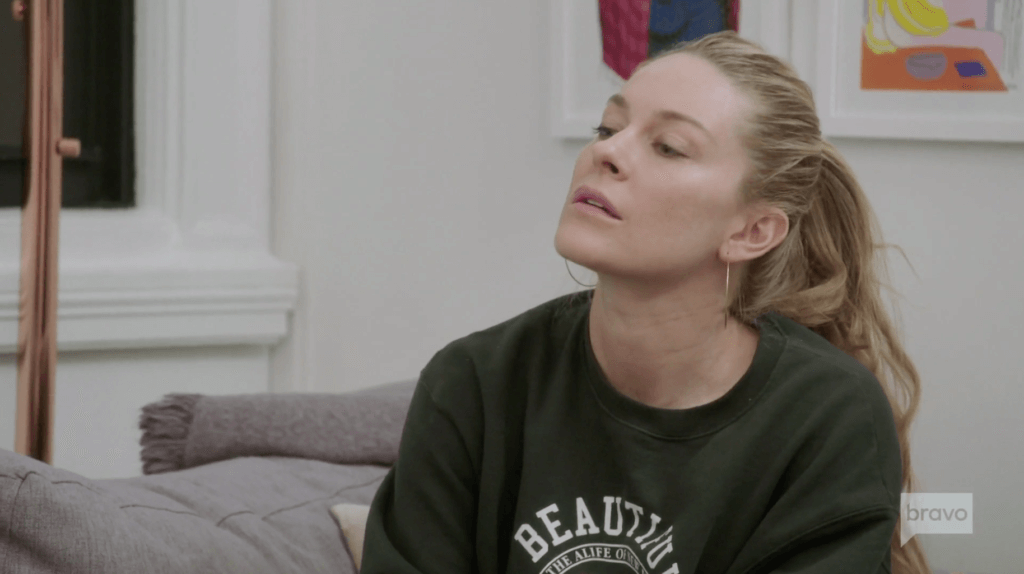 It’s launch time! Leah shows up first and chats with the owner of Century 21. Tonight, she’s wearing a Sonja Morgan dress. Ramona has on a Sonja creation that looks more like a nightgown. Dorinda arrives next, and the three ladies greet one another.

Sonja walks down the street with her many interns. She’s looking fab in a sparkly black dress. We see flashbacks of Sonja’s previous endeavors, like the toaster oven and Tipsy Girl. This night is her vindication.

Sonja is radiant. She loves seeing her name in neon and her clothes on display. Luann comes in wearing a Sonja gown. While they’re taking pics in front of the Sonja sign, Ramona pesters the bartender. Same complaints, different day. She even brings her own straws, along with a string of complicated instructions about how to make a gin and tonic. 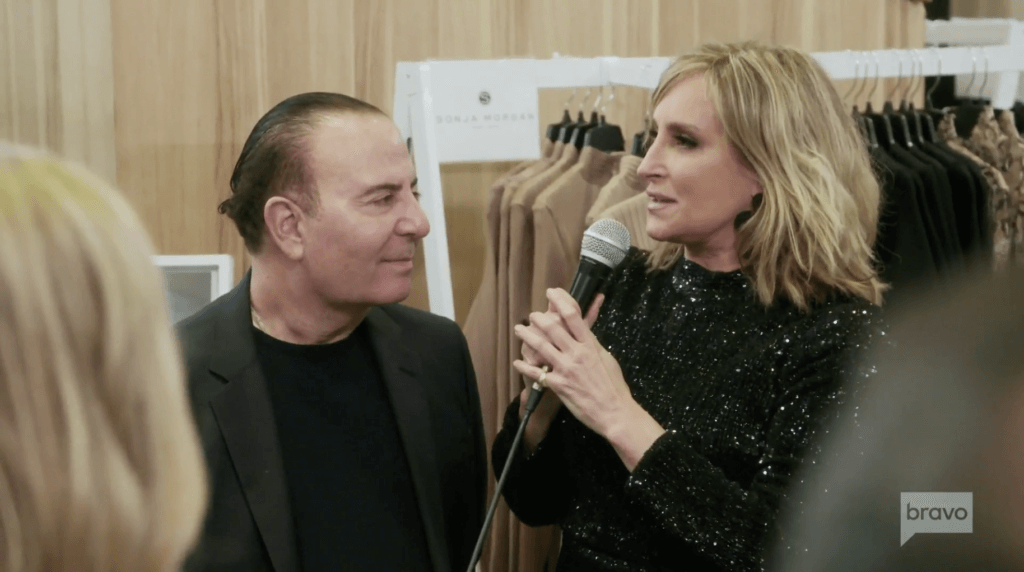 Finally, Sonja is introduced and makes a speech. When a phone rings, it brings her words to a halt. It’s Ramona’s phone, of course. Sonja continues, giving love to her girls, thanking the other ladies for their support.

The women are excited for Sonja and her success. And that’s the end of our episode.

So, was Ramona Singer wrong for addressing Dorinda’s anger issues on a group text? Why is Dorinda so volatile this season? And did it hurt your heart to see Leah’s mom say she doesn’t always like her daughters?