Welcome back to an all-new episode of The Real Housewives of Potomac, an episode full of “mayhem, foolishness and, contention.” Let’s get started!

This week’s episode picks back up where it left off at Ashley Darby’s “Coming Out The House” party hosted by none other than fast friends Gizelle Bryant and Monique Samuels. Right off the bat, Candiace Dillard is backed in a corner for her low-down, trifling behavior. As one can imagine that goes over about as well as Karen Huger meeting Monique Samuels’ therapy parrot, T’Challa. Candiace essentially doubles down by giving the entire table a big fat “F YOU” — literally.

Wendy Osefo asks for a little backstory as to why everyone has issues with Candiace Dillard  (as if she doesn’t already know) and asks if it’s just Candiace who owes Ashley Darby an apology or if Candiace and Ashley both deserve an apology. Both Ashley and Robyn Dixon attempt to school Wendy on their history with Candiace, including the time Candiace assaulted Ashley with a butter knife during a yet another dinner party from hell. I imagine that’s the precise moment career-woman Wendy realizes she may have surrounded herself with the wrong group of ladies, but I digress.

The conversation swiftly goes from being about Candiace vs. Ashley to Candiace vs. Monique when Gizelle promptly asks Candiace Dillard how close she and Ghost of Housewives past, Charisse Jordan Jackson, really are. Monique then lets Candiace know just how angry she was at Candiace for inviting her secret arch-enemy to her one-year anniversary party. Candiace, however, maintains that she had no idea that Monique and Charrisse had “that much” beef. Grand Dame Karen Huger jumps in and tries to reel the ladies back in for committing a full-on “gang-bang” so she can get back to the task at hand — enjoying her wonderful Chilean sea bass.

In a shocking turn of events, Candiace Dillard  and Ashley Darby appear to reach some sort of impasse. My guess is that Candiace can only feud with one woman at a time and she took a calculated risk to zero her efforts in on Monique. She then promptly turns to Wendy and declares, “Who’s on BS today? The MF’n table.” Well, alrighty then. 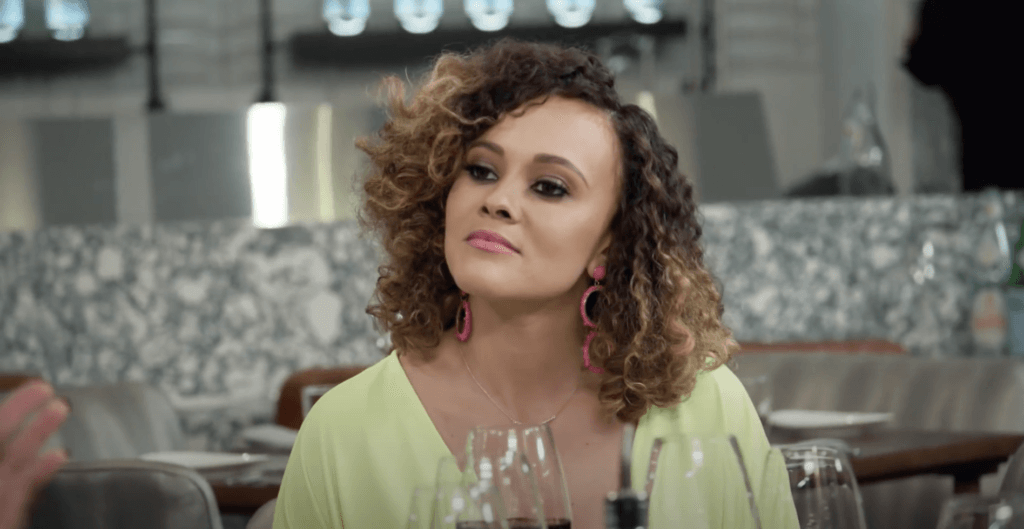 We’re treated to yet another juicy moment of Bravo breaking the proverbial fourth wall when the cameras wrap but the audio keeps going. The audio reveals a conversation between Candiace and Monique to which Candiace yells at Monique “Don’t talk to me, we are not friends, back the F off of me.” Monique then tells Candiace she “had to,” to which Candiace responds, “You could have come to me at the party and been like, ‘Why did you invite this hoe?'” Later in her talking head, Candiace accuses Monique of behaving one way in front of the group and a different way when they’re not around, — “group” being the code word for “cameras.”

The next day, Ashley, Michael, and baby Dean go shopping for the Sip and See. Ashley breaks the news to Michael that she invited everyone to their home for the Sip and See… even Candiace. Michael is none too pleased and requests that all weapons AKA butter knives be hidden before the party starts.

Meanwhile, Gizelle’s construction team is still hard at work on her home renovation, or “cabin” as Candiace fondly like to refer to it. Robyn pays Gizelle  a visit and they discuss how they both ended up taking back their ex-husbands. Gizelle admits that Jamal Bryant has experienced tremendous growth recently and during that time she became attracted to him again. She also admits that she is confused by how her daughters are feeling as they have made it quite clear they do not want their parents back together. Who knew Parent Trap was a fictional movie and not based on a true-life story??? Clearly not Gizelle.

We finally learn more about Wendy and her family. It turns out both she and her husband are Nigerian and her mother makes it a point to come over and give them Igbo lessons as it’s very important that they know how to speak it. According to Wendy’s mother, Wendy’s husband is “one of the lost ones” for not knowing the Nigerian tongue.

We also learn more about Wendy’s accomplishments. Not only does Wendy possess a Bachelor’s degree, two Master’s degrees, and a PhD., she also works as a professor at Johns Hopkins University where she teaches education and policy. She also serves as a political commentator on the side as has made it her mission to speak up for those who have been historically marginalized. #slightwork

We also learn more about Candiace’s mystery stepchildren AKA “bonus children,” as her husband Chris has three children from two previous relationships. During a shopping trip for said bonus children, Candiace decides to also pick up a gift for Baby Dean. Maybe hell has indeed frozen over. Even her husband Chris seems surprised when Candiace reveals she will be attending Ashley’s Sip and See party.

The episode continues to deliver surprise after surprise when we learn that Jamal Bryant has orchestrated a fancy dinner on a private yacht for the entire family in an effort to celebrate his ex-wife/current girlfriend’s birthday. Let the awkwardness ensue.

In between bouts of resting stank faces by all of their shared daughters, the air seems to be deflated completely out of Jamal’s entire body when he surprises his daughters with an ownership stake in a restaurant in Atlanta. Instead of being grateful, their eldest daughter, Grace, pouts because it’s not Nicki Minaj tickets. I guess ya can’t win ’em all, Pastor Bryant.

The next day, Ashley Darby is running around putting the finishing touches on the decor for the Sip and See party when Gizelle arrives first. Gizelle and Michael exchange pleasantries before Gizelle asks if she can hold Baby Dean. Ashley appears to mull this question over carefully before finally relenting but asking that she NOT kiss the baby to which Gizelle responds that she would never do that. Yikes.

Things go from bad to worse when the rest of the gang arrives, including Charisse . In a moment of pure shock, Ashley hands over her fresh bundle of joy to knife-throwing Candiace. Clearly, Baby Dean has already been forewarned about psycho Candi as he immediately starts wailing. I imagine Michael was somewhere across the room smiling from ear to ear. Well done, Grasshopper.

Once all seated, Ashley opens up the floor for yet another staged Candiace intervention. Once again it doesn’t go well when Monique and Candiace start sparring. Wendy inserts herself yet a second time when she poses the question that maybe Candiace doesn’t feel comfortable speaking with Ashley in front of everyone because she doesn’t truly consider them to be her friends. Monique quickly warns Wendy to “tread lightly” as she has been nothing but a loyal friend to Candiace.

Things go from bad to worse when Candiace accuses Monique of being “a flip-flopper” and then blames Monique’s newfound friendship with Gizelle for being the reason there’s such hostility. Immediately Gizelle and Robyn pile on and Candiace makes an abrupt exit. Surprise, surprise.

Ashley chases Candiace outside and the two have an interesting conversation that involves Ashley comforting Candiace and the two vow to try and discuss their own differences at a later date.

Meanwhile back at the party, Michael Darby works hard but Gizelle Bryant works harder as she’s fueling the fire yet again asking both Monique and Charisse why they are no longer on speaking terms after they used to be so close. Monique warns Gizelle to “leave it alone” but of course, the warning falls on deaf ears.

Tune in next week as the drama continues…