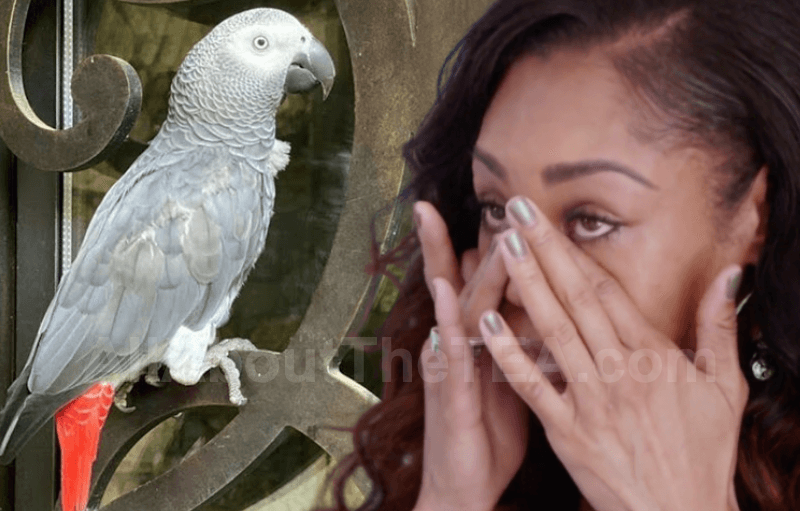 Monique Samuels’ beloved pet parrot, T’Challa, is missing and the Real Housewives of Potomac broke the news in a tearful plea for his return via Instagram Story.

Real Housewives of Potomac were introduced to Monique Samuels’ African grey parrot in season 5. “Now that I have three kids, I’m constantly being pulled left and right, and I’m trying to figure out how to balance myself,” Monique explained in a talking  head confessional during the episode. “I have always been an animal lover, and I said, ‘I need to get a bird.’ He’s like a stress reliever for me.”

Monique Samuels gave T’Challa a potty training session on the season 5 premiere episode — which she noted “is coming along great” because “T’Challa is so smart.”

Monique Samuels also paid Karen Huger a visit at her new Potomac home with T’Challa perched atop her shoulder. “He always wants to be with me. And him and Chase kind of compete for my attention,” Monique said with a laugh during the episode.

The mom of three often shares video clips of T’Challa on social media and even created an Instagram account for the beloved bird — which Andy Cohen quickly followed.

T’Challa has some thangs to get off his chest ??? he’s finally tryna talk!!!! What do you think his first words will be? ? #RHOP #africangreyparrot pic.twitter.com/Dmo5RXk1p1

In the video below, Monique Samuels explains that on Sunday morning as she enjoyed a cup of coffee in her backyard, T’Challa, may have become spooked by a noise and flew off.

Press play below to listen to Monique Samuels explain what happened and find out how you can help.

The Real Housewives of Potomac ai Sunday, August 2, at 9 pm, ET, on Bravo.