90 Day Fiance: Happily Ever After? star, Karine Martins is speaking out, after her husband, Paul Staehle alleged that his wife was MIA and a police search was underway.

Karine Martins assured fans that she was safe and sound, via a social media statement.

“I want you all to know that me and Pierre are doing well now,” Karine wrote. “All this past days I had a lot going on. As the media showed, I had issues where the police was called because I feared for my life and my son’s life which led me to ask for help and ultimately be rescued from an environment that no longer was healthy for none of us involved in the situation.”

Karine Martins continued, “I’m getting the bet help I could ever get and I’m really thankful for all the people involved in it. I also thank all the people that worry about me for the support I have had. It have been a big part of my recovery.”

“Relationships are hard and sometimes it just can’t be fixed anymore. I need this time to organize my thoughts, work on myself and care for my son after everything have been through in the last year and half. Just to clarify, the EPO was me, I had help from a translator since I do not speak English. I also would like to state that I’m not missing. The police knows where to find me if they need me. This is a legal matter not a “media matter”. That being said it’s the first and last time I will speak about it.” 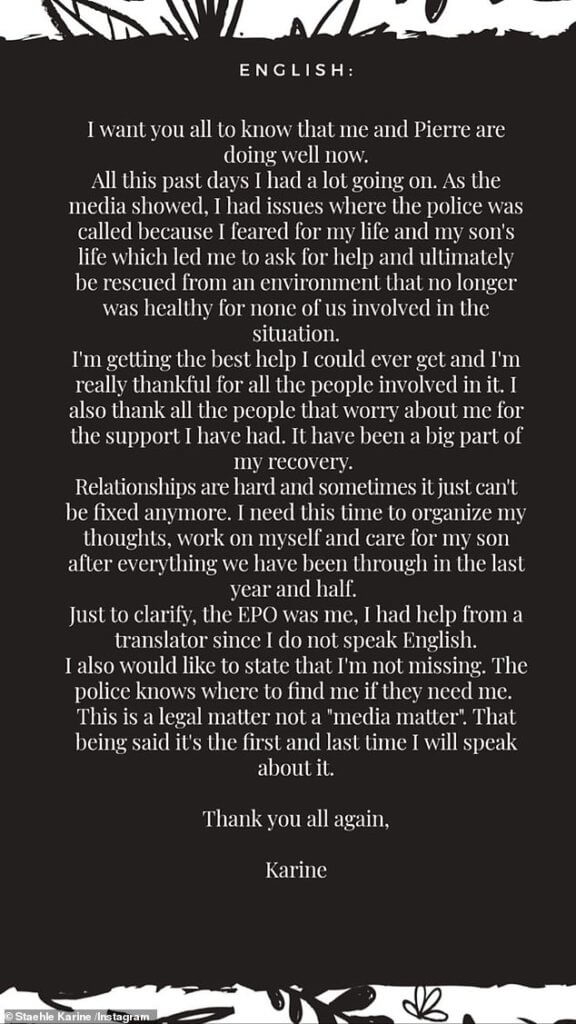 Karine Martins, 23, called the police after the 90 Day Fiance couple got into an explosive argument, asking for help in leaving the family home. Paul accused his Brazilian bride of infidelity and of endangering their son, Pierre, 17 months. Karine, who had obtained a restraining order against Paul, accused her husband of of being controlling and of sexual abuse. Paul claimed that CPS had an open case against his wife, after she was accused of getting aggressively drunk in the presence of their toddler son.

However, an in the know source spoke exclusively with AllAboutTheTEA.com and revealed Karine Martins is not the innocent victim in this drama and may have ulterior motives for filing rape and abuse charges against Paul Staehle.

Press play below to find out the real deal.

Paul Staehle told fans that his wife and child were missing on his Instagram story,  on July 31, and claimed that a police search was underway. He later revealed that he had tested positive for an STD — declaring that he had never stepped out on his wife.

The duo recently confirmed that they are expecting their second child.

90 Day Fiance: Happily Ever After? airs on Sunday nights at 8 pm ET, on TLC.