Welcome back to an all-new episode of Real Housewives of Beverly Hills. Welp, ladies and gentlemen, it finally happened. Brandi Glanville finally got five more minutes of Housewives fame and managed to drop a nuclear bomb in the process. But what else is new? The real question is do we trust her? Maybe an unpopular opinion but I’m gonna say… NEGATIVE GHOSTRIDER. But before I start pleading my case for all the reasons this storyline reeks of manipulation let’s take it from the top, shall we?

This week’s episode picks back up at Kyle Richards’ black and white party that she thinly disguised as a charity event for a children’s hospital. That alone is enough to make someone shout “BS” from the rooftops of her Encino mansion. After the auction, where the rich people all sit around and impress each other with how much their willing to bid on a subpar trip to an all-inclusive resort, Kyle surprises her guests with a performance by… Wilson Phillips. Cool… I guess? Dorit Kemsley, however, can’t help but throw a little shade at Kyle for copying her surprise concert tactics. Lest we not forget Boy George’s impromptu performance at Dorit’s party… but I digress. 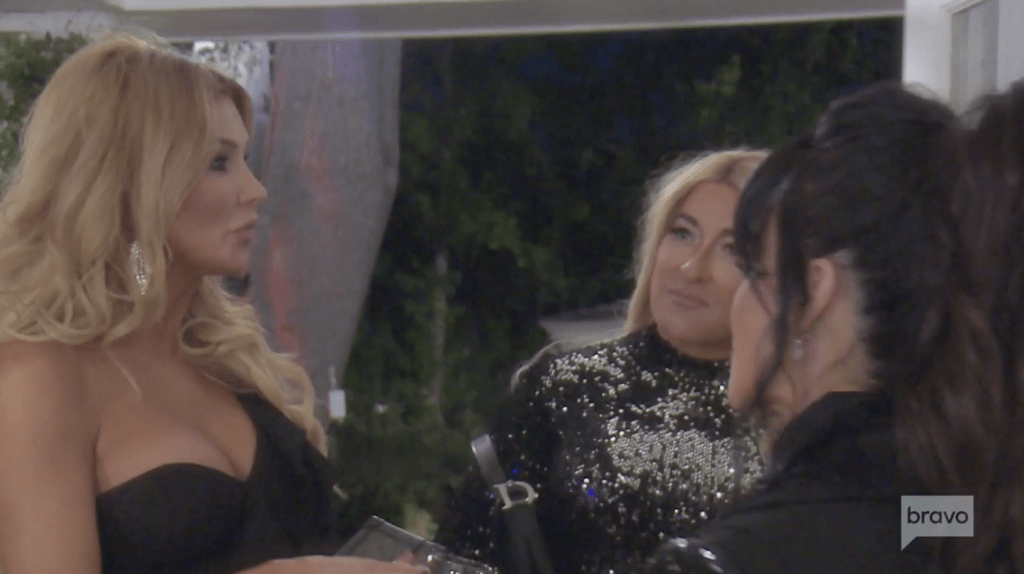 The real fun, however, is happening inside when an inebriated Brandi Glanville plants herself behind the bar and immediately chugs a very large glass of wine before making an awkward toast to “surrogacy” with Adrienne Maloof. She then proceeds to drunkenly apologize to Adrienne for outing her use of surrogates on national television many seasons ago before blameshifting it all on a certain former housewife who is no longer with us. According to Brandi she was “put up to it” which begs the real question: if Brandi has a proven track record of doing dirty work for others, who’s to say this stunt regarding Denise Richards isn’t just more of the same? 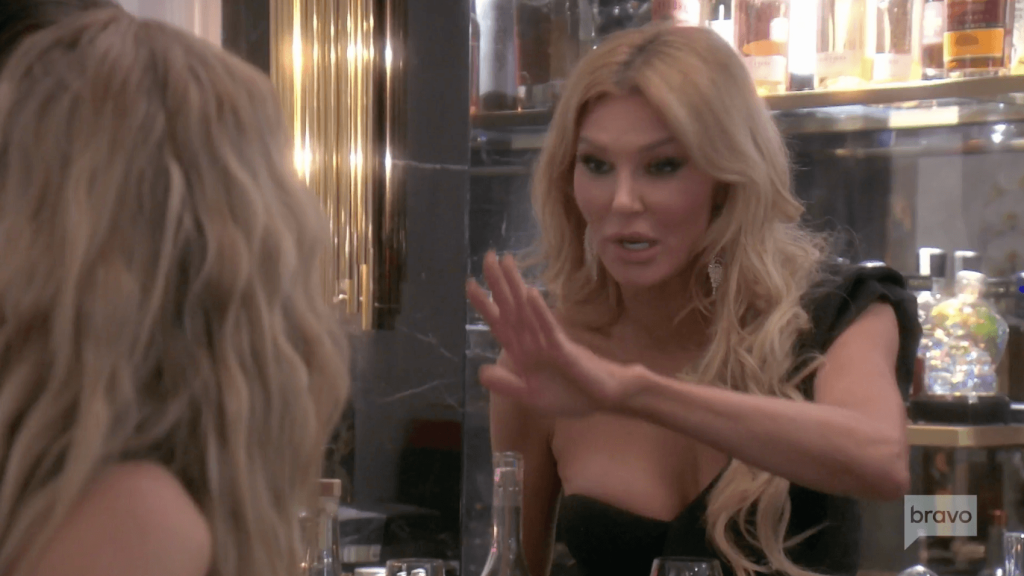 Denise Richards and Aaron just so happen to be standing by the bar inside while Brandi is babbling on and on about whatever enters her alcohol-laden mind. She then accuses the couple of being co-dependent before announcing that she would like to be a “throuple” with them. Aaron gives Denise the ol’ “let’s get out of here now” look and the two flee the scene of yet another a party for the 85th time this season. 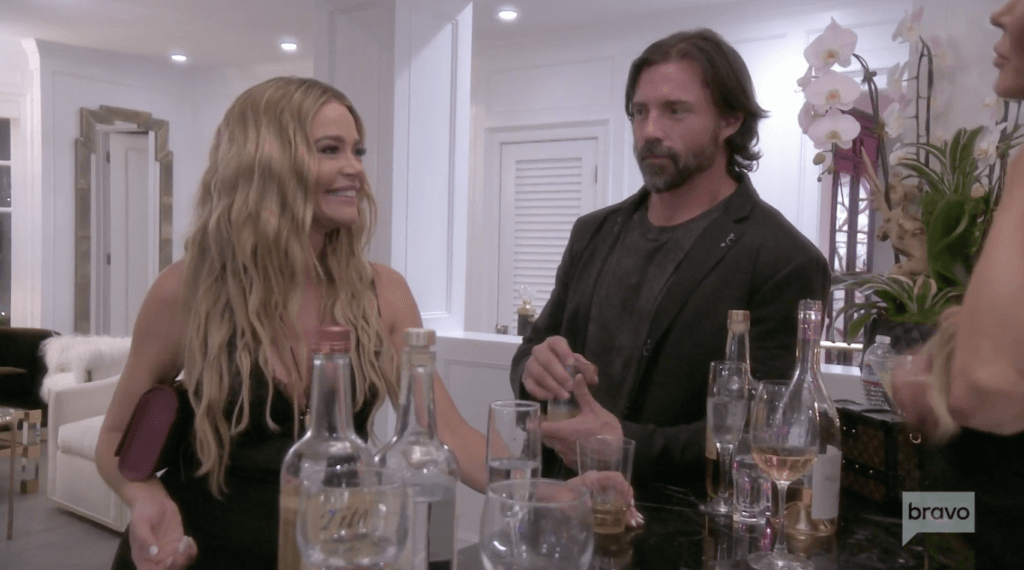 The next day, Garcelle Beauvais and Sutton Stracke share an awkward dinner together in which Garcelle pointedly asks Sutton where she got all of her money. Sutton looks like a deer in headlights before admitting in a roundabout way that she divorced well. Shocker. All’s well that ends well, however, when the two bond over the fact that Sutton is familiar with the term “kitchen” and can use it in a sentence. For those scratching their heads, the term “kitchen” also refers to the stubborn hair around the nape of the neck. Maybe there’s hope for snooze fest Sutton, after all.

Erika Girardi hosts the party for her Shoe Dazzle collaboration and the ladies all gather around a gigantic cake in the shape of a high heel as Lisa Rinna invites them all on a trip to Rome, Italy. Everyone seems excited… minus Garcelle, who is once again missing in action. Girl, how many times do we need to tell you??? GET IN THE GAME. 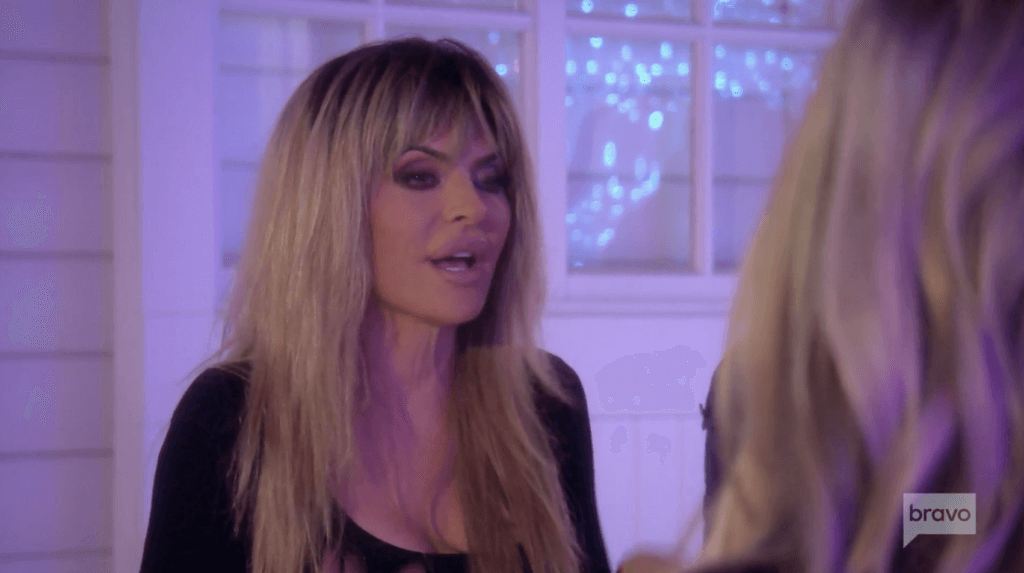 Later, Denise musters up the courage to attempt to “clear the air” yet again with Erika. At first, Erika appears open to having a conversation but when she tries to discuss Denise’s husband Aaron inserting himself smack dab in the middle of all the lady drama Denise immediately shuts that part of the conversation down once more. Erika is left visibly frustrated. They eventually appear to reach an impasse of sorts, which should be a pretty good indication of how well the trip is gonna go. In the words of East coast housewife, Dorinda Medley, “not well b***h.” 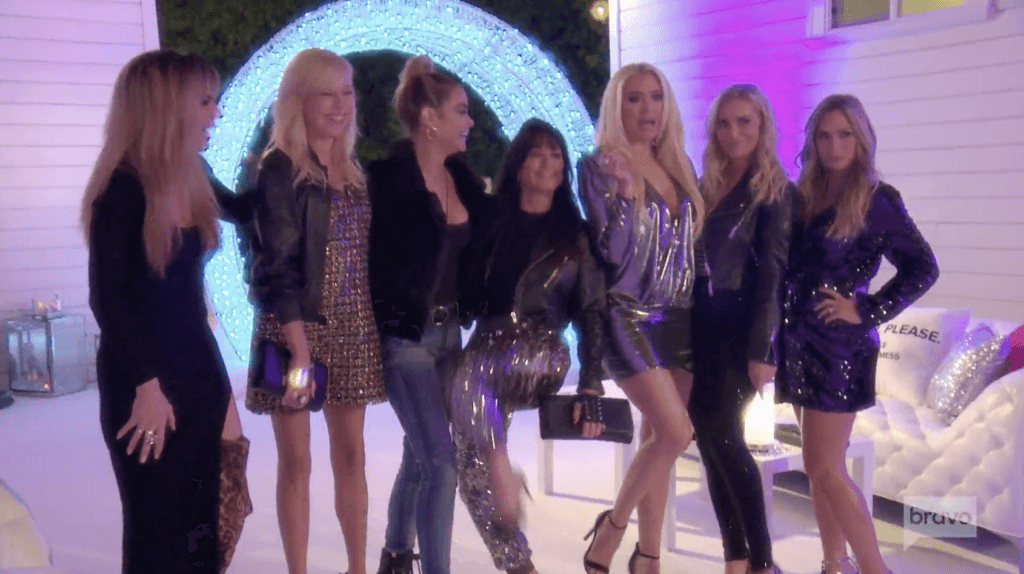 We finally get to the meat of the episode (and let’s be real, the season too) when Teddi Mellencamp pays her BFF Kyle a visit to discuss the deets regarding the baby shower that her bosom buddy is hosting for her. As luck would have it Kyle’s sister, Kim Richards, randomly stops by to drop off some dresses she borrowed. When she arrives, she casually mentions that Brandi is outside waiting in the car. 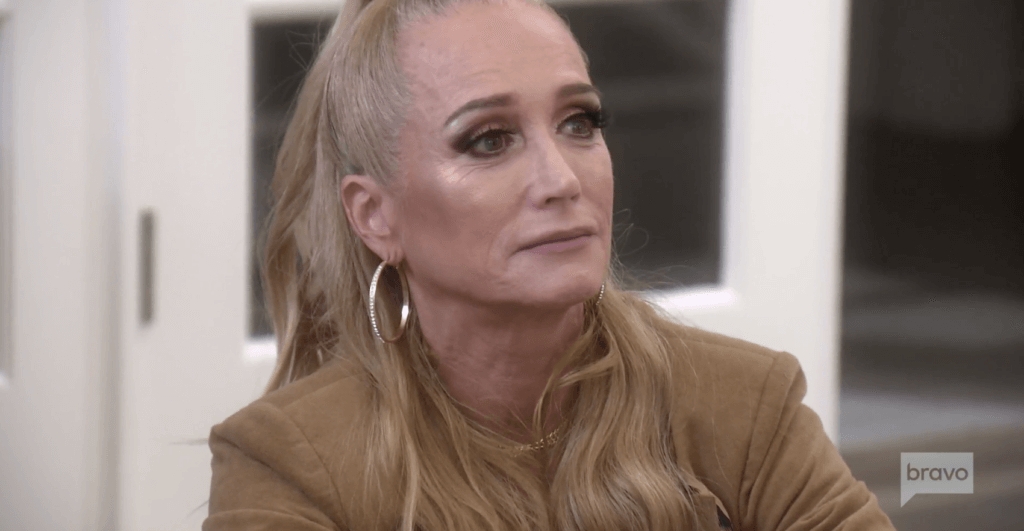 Kyle Richards immediately asks Kim Richards to invite her in. Like clockwork, Denise comes up in conversation and before we know it Brandi Glanville is singing like a canary and recounting this long story about how Denise essentially tricked her into thinking that she and Aaron have an open relationship but after she and Denise engaged in a tryst, Denise later swore Brandi to secrecy and said that under no circumstances could her husband ever find out about their hook up. 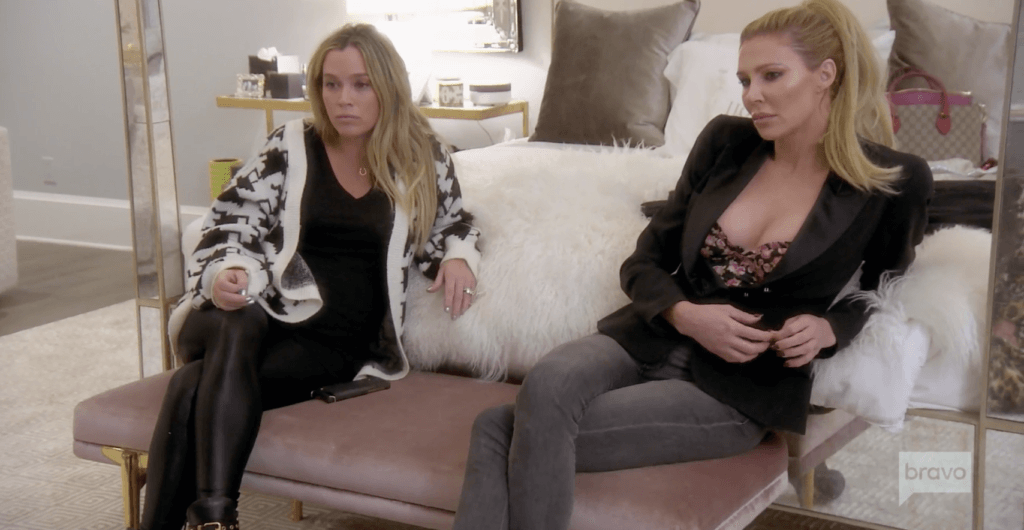 Brandi Glanville then manages to squeak out some crocodile tears and once again we hear the time old tale about how her ex-husband’s affair with Leeann Rimes ruined her life. Blah blah blah. Brandi maintains that she would never want to be on the other end of a cheating scandal and yet someway, somehow she’s managed to become “the other woman.” 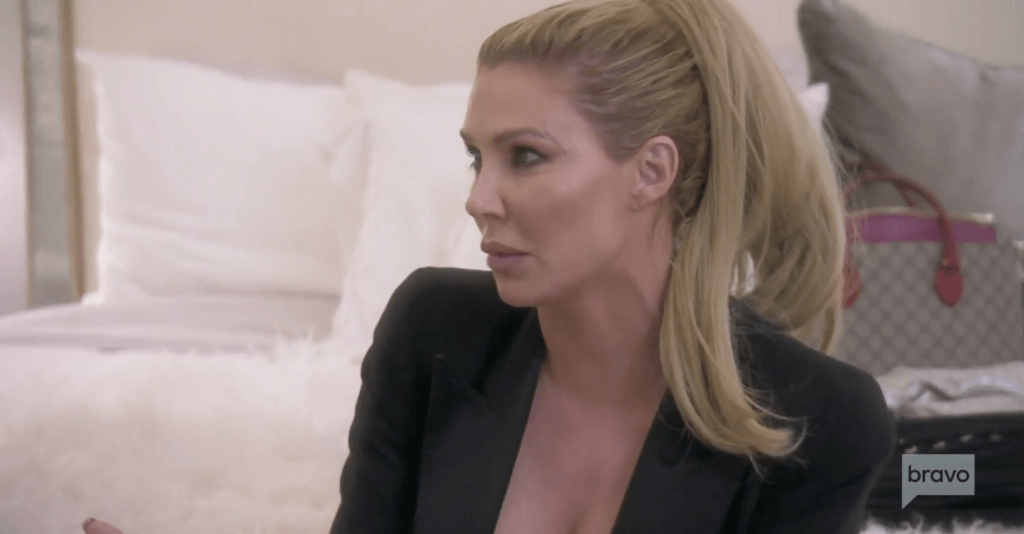 According to Brandi this tryst also happened upstairs in a loft with no door… with one of Denise’s daughters downstairs. SHOTS FIRED. The cherry on top of this deep, dark confession is that she also informs Teddi and Kyle of the less than pleasant things Denise had to say about the rest of the ladies in the group including that she doesn’t like Kyle, she thinks Teddi is just living in her famous father’s shadow and Erika is “ice-cold.” Pretty sure we’ve heard that before, ahem, Erika’s season 8 tagline. 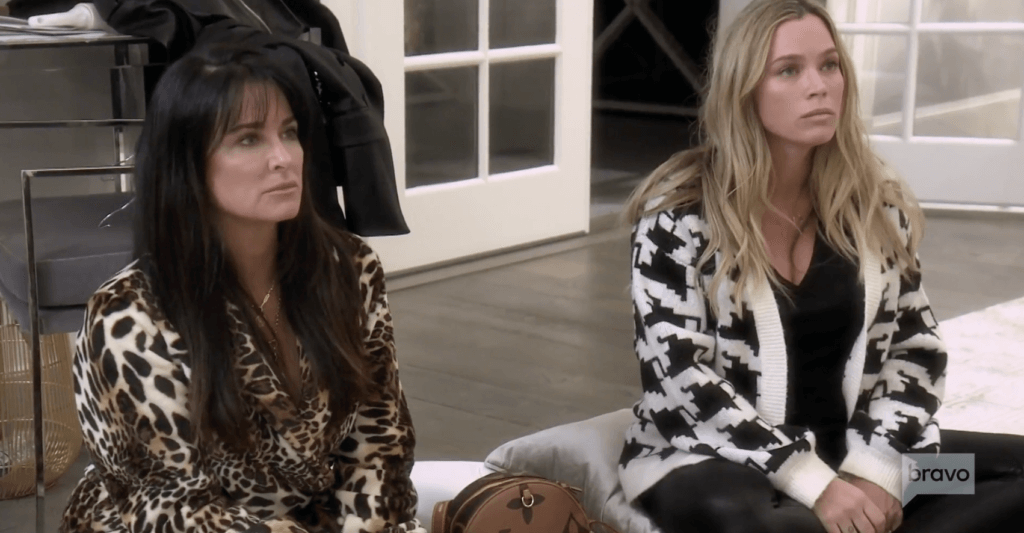 The episode wraps with the ladies all traveling to the airport for Italy and we’re gifted with a teaser of Teddi living up to the nickname Denise gave her (see sh*t stirrer) and immediately blurts out to Lisa that Denise and Brandi hooked up to which Lisa asks, “so they f*****?” But did they or didn’t they? While the popular opinion is that something really did transpire between Denise and Brandi, I’m curious to see how this plays out in the next episode. I have a feeling there’s a lot more to this story and we’ve just hit the very tip of the iceberg.

Tune into The Real Housewives of Beverly Hills next week as the scandal continues to unfold.