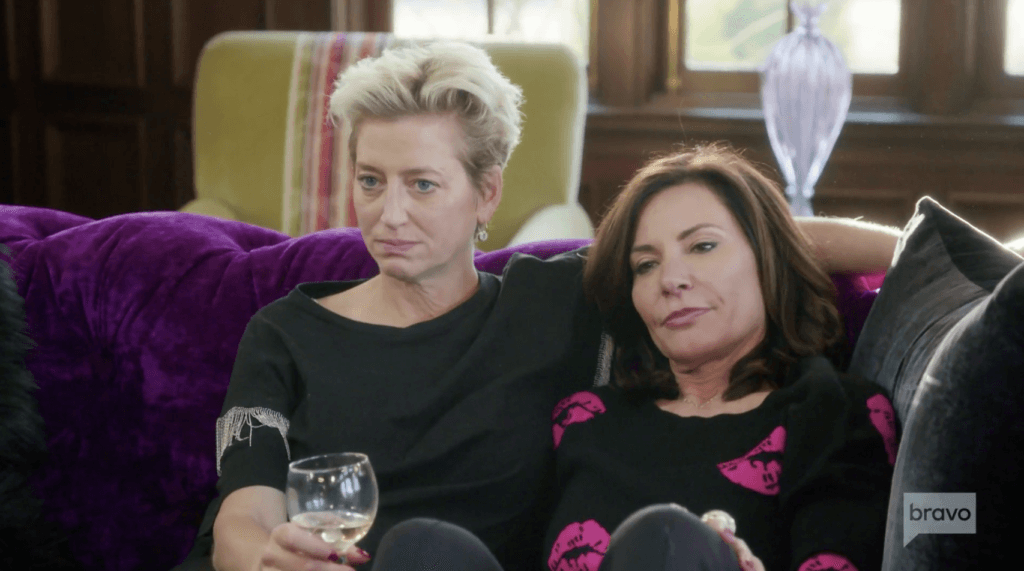 It’s time for another Berkshires weekend on the Real Housewives of New York City.

Dorinda Medley has remodeled Blue Stone Manor after a recent flood, and frankly, I don’t see many changes. Every room is painted in a different jewel toned color. The furniture’s wacky and over the top. So…pretty much the same as before.

Dorinda Medley sits in her fuchsia bedroom and calls the ladies for a fun weekend at her house in the country. Unfortunately, no one picks up her call, and she feels like a loser.

Friend of the Housewives, Elyse, stops by Sonja Morgan’s apartment to check on her after the Halloween party. Sonja got shitfaced — as usual — and can barely remember what she said. Or did. Or that she smacked the crap out of a voodoo doll she named Ramona. Sonja Morgan, who is still mired in the past, displays pictures of herself around the apartment. Mostly pics from when she modeled in her twenties. And she possesses a genealogy blue book which touts her and her daughter’s lineage in the great Morgan dynasty. Sonja Morgan admits she went into the Halloween party drunk and angry. She was grateful Elyse had her back in the fight against Ramona Singer. But when Elyse heard Ramona was crying, she felt sorry for her.

Ramona Singer left the party early and went to dinner at Omar. Elyse stopped by to see Ramona on her way home, to comfort her old friend. But Ramona wasn’t in a receiving mood. Though alone in a corner table, Ramona refused to allow Elyse to sit with her, telling her that she was there with girlfriends. I guess Elyse no longer qualifies?

Now, Elyse is hurt and angry at the way Ramona’s been treating her. And on top of all that, Ramona flirted with Elyse’s husband last summer by stripping down to her bikini in front of him and offering to give him a massage. Whoa! Ramona is out of control. Someone rip that estrogen patch off her hip because it’s making her crazier than normal. 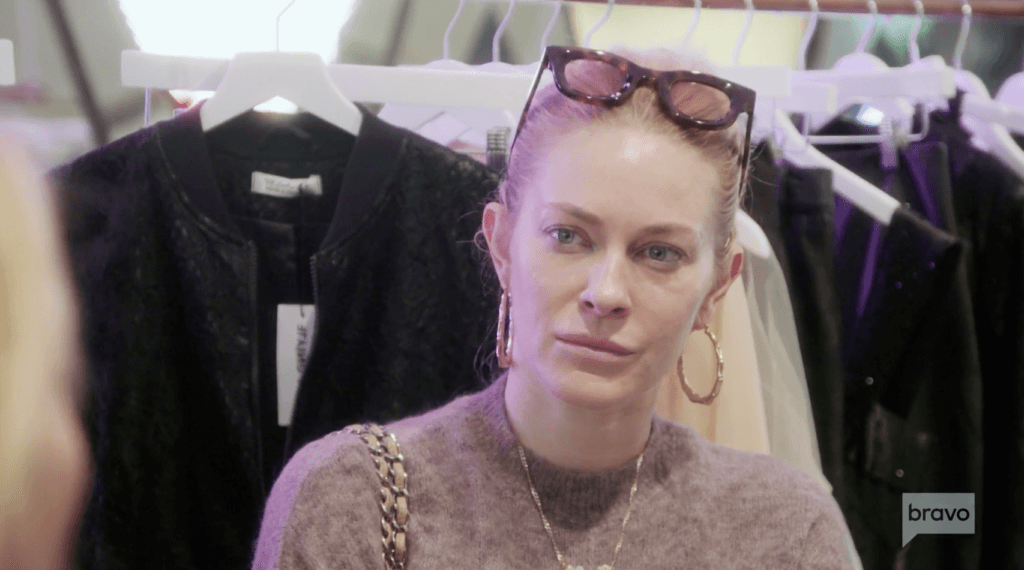 Luann de Lesseps meets up with Leah McSweeney for a little retail therapy. Leah is still hungover from the Halloween party the night before, but Lu is looking as fresh as a spring morning. Who stumbles in? Ramona the Terrible.

Ramona Singer thinks Dorinda lit into her the night before because she has personal problems, mainly she’s finally mourning the death of husband, Richard. Leah disagrees, saying Dorinda is still angry that Ramona dragged her to Long Island to supposedly plan a birthday party. Ramona claims Dorinda is jealous. No one’s throwing her a birthday party. Dorinda doesn’t even have fifty close girlfriends to celebrate her special day. 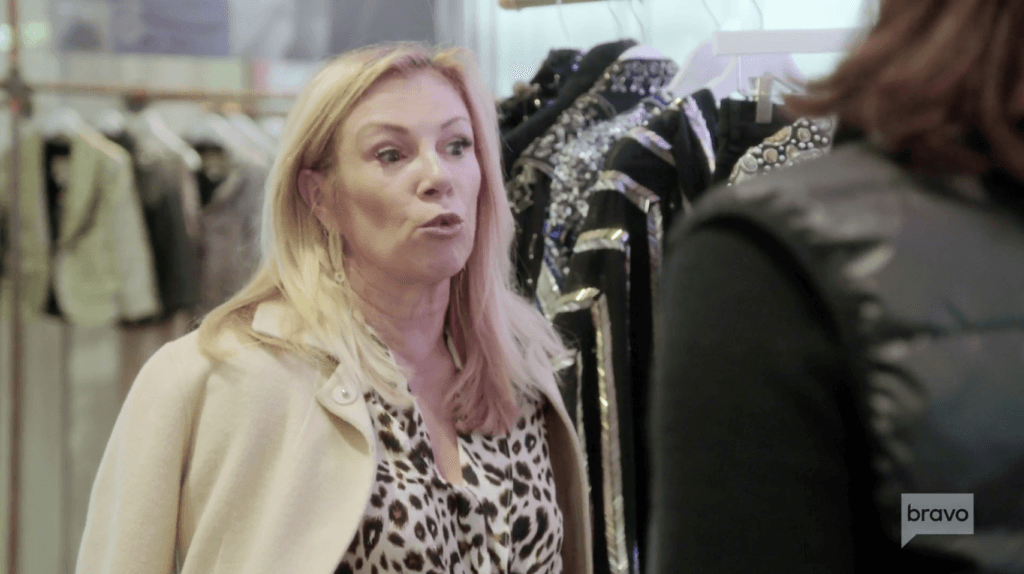 Leah McSweeney cuts out early to pick up her daughter. Meanwhile, Lu talks to Ramona about having a good time in the Berkshires. Ramona needs to stop pushing Dorinda’s buttons. For her part, Lu is still pissed that Ramona brought Missy, Tom’s ex, to the Halloween party. 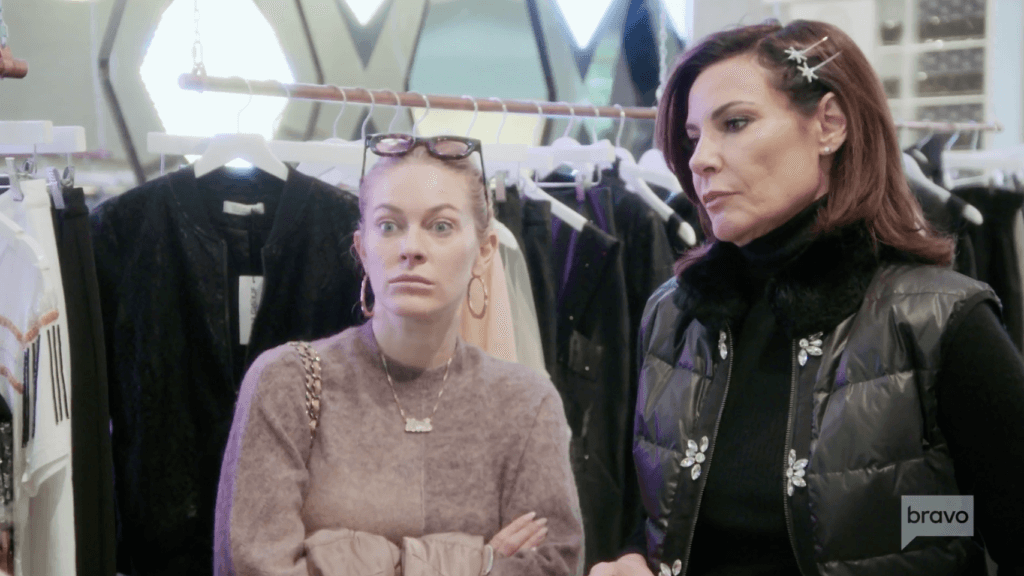 At Blue Stone Manor, Dorinda Medley, wearing Gucci socks and Crocs, instructs her maid not to wait on the women hand and foot. No wine. No green tea. This isn’t a hotel. Ramona has two legs, and she’s capable of using them to trot down the stairs to pour herself a glass of wine. 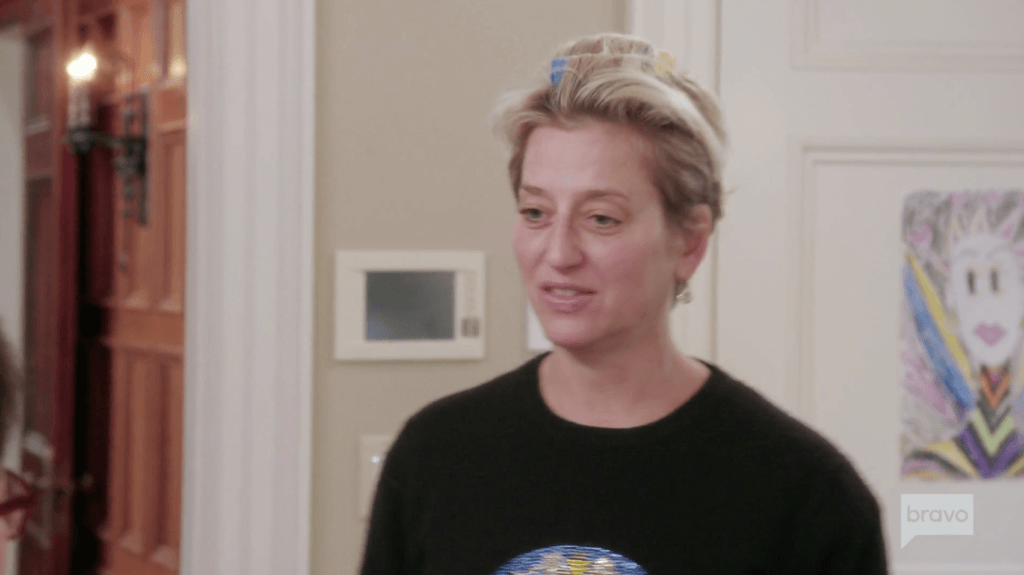 Leah McSweeney and Sonja show up at the house. But Sonja is afraid to ring the doorbell. Inside the house, Dorinda wonders if her daughter will throw away all her things after she dies. Um, probably. Once inside, Leah traipses through the house to view all of Dorinda’s knickknacks. There’s a disco ball at eye level by the stairway. And we see half a dozen flashbacks of wild times at the house. Dorinda shows Leah to the newly remodeled Moroccan room.

In a car tooling north, Lu and Ramona ride together. Ramona’s still complaining that Dorinda loses her temper, and while she’s hurt by it, she holds no grudge toward Dorinda.

Lu and Ramona let themselves into the house while Dorinda, Leah, and Sonja lounge on the porch. Ramona goes to Dorinda and hands her a bouquet. They decide to makeup and forgive. Ramona says life has cheated Dorinda, and that’s the reason she’s been lashing out.

As for accommodations, Lu gets stuck in the fish room. Again. But this time, she’s not so pissed about it. She cuddles with the fish on the bed.  Now that Dorinda has redecorated, Lu’s less hostile about sleeping with the fishes. But she isn’t the only one with a roommate. Ramona has a stuffed Marlin in her bed. 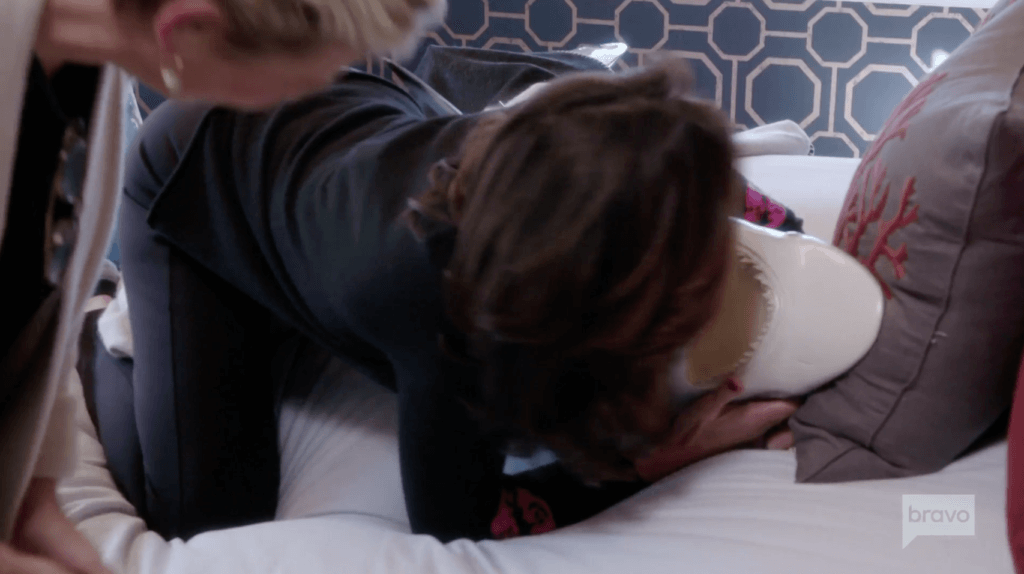 While Ramona Singer asks for permission to unpack her suitcase in the foyer, Leah scans Elyse’s social media. Ramona has pushed Elyse to the brink. She has unfollowed Elyse, and now it’s on!

As the women whisper about Elyse’s post, she arrives at the house and is just in time for lunch. Everyone greets the newcomer, but Elyse and Ramona ignore each other.

As they discuss the balls of ice in their cocktails, Leah admits she had sex with a guy who only had one ball. She’s praised for being charitable. That’s one way to look at it! 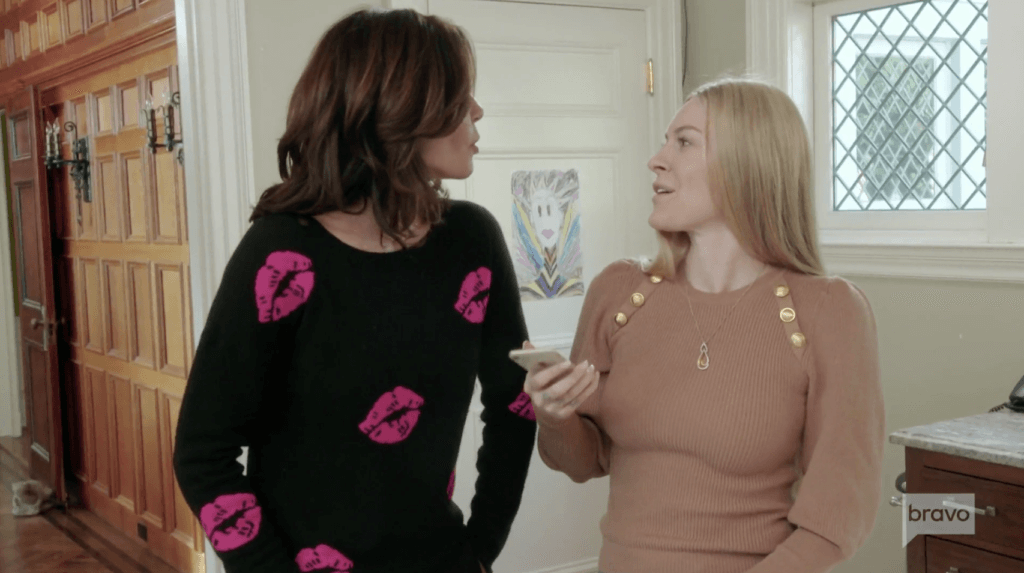 The women toast to each other, and Dorinda is proud to display her new décor to the ladies. As she shows Elyse to her room, Dorinda whispers in Elyse’s ear that she needs to talk to Ramona and clear the air. But Elyse isn’t stupid. She sees Dorinda instigating a confrontation between herself and Ramona. Anything to make Singer squirm.

As the women congregate in the kitchen, they talk about Sonja leaving with a young guy a few nights before. This was after the haunted house, when the women went to Omar’s for a drink. Though Sonja asked Elyse to attend, Ramona rescinded the invite. It was for apple holders only. No friends of the Housewives allowed.

But if Elyse expects Ramona to feel sorry for the slight, she’s in for a surprise. Ramona has no shame. No remorse. She would disinvite Elyse all over again.

Elyse has a real beef against Ramona at this point, and for good reason. She’s seen Ramona blow up her friendships over the years, watched her make people feel insignificant. She just never thought Ramona would treat her that way.

As Elyse continues to confront Ramona for not including her in group activities, Ramona says they should have this talk in private. Then she passive aggressively tells Elyse to lower her voice—but Elyse isn’t yelling. They finally break off and talk one on one.

Leah thinks the other women need to hear the convo, because Ramona is brilliant at gaslighting people. In fact, before they burst into the living room to break up the quiet chat, Ramona tells Elyse that she needs to form her own relationships with the other women. You know, organically. Except that Elyse has known Sonja, Dorinda, and Lu for decades. The only two she wasn’t closely acquainted with was Tinsley Mortimer and Leah. 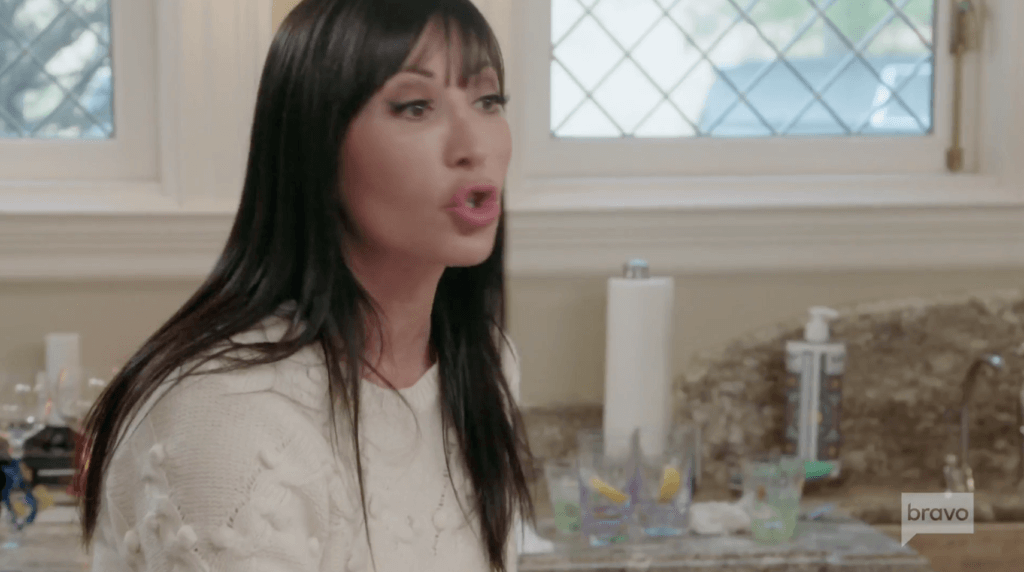 Ramona Singer tells Elyse to enjoy her friends. Elyse reminds Ramona that she’s been around Elyse’s husband and family. It’s hardly a one-way street. Ramona squints and makes a face. “I share everything with you,” she tells Elyse. (Not a table at Omar, apparently.) Ramona is losing the argument, so she does what she always does in these situations. She leaves. Except there’s nowhere to go.

Sonja yells at Ramona’s back, “She’s running. She’s on the run!” Ramona stomps back and claims she doesn’t like conflict. But then we see flashbacks over the years where Ramona causes a scene, instigates a row, and displays mean girl behavior. She loves conflict!

Finally, Elyse and Ramona slip off to the kitchen. Ramona says she’s disappointed in Elyse. She’s upset Elyse didn’t stand up for her when Dorinda attacked her at the Halloween party. Elyse maintains she’s one of Ramona’s closest friends. Yeah, Ramona counters, one of fifty close girlfriends. Elyse says those people are social friends, not good friends. She calls Ramona clueless and naïve. Ramona says she’s done a lot for Elyse, who should be grateful. Then she leaves the kitchen. And Elyse follows behind.

In the living room, Lu picks a fight with Dorinda. Lu feels Dorinda went too far with her attack on Ramona. Leah says in her talking head that she can’t tell Dorinda the truth or she’ll get her head chopped off. Luann says Dorinda got dark and mean during the party, and Dorinda immediately gets defensive. Sonja accuses Lu of defending the devil (the devil being Ramona). When your best friends describe you as the devil, you may have a personality problem. 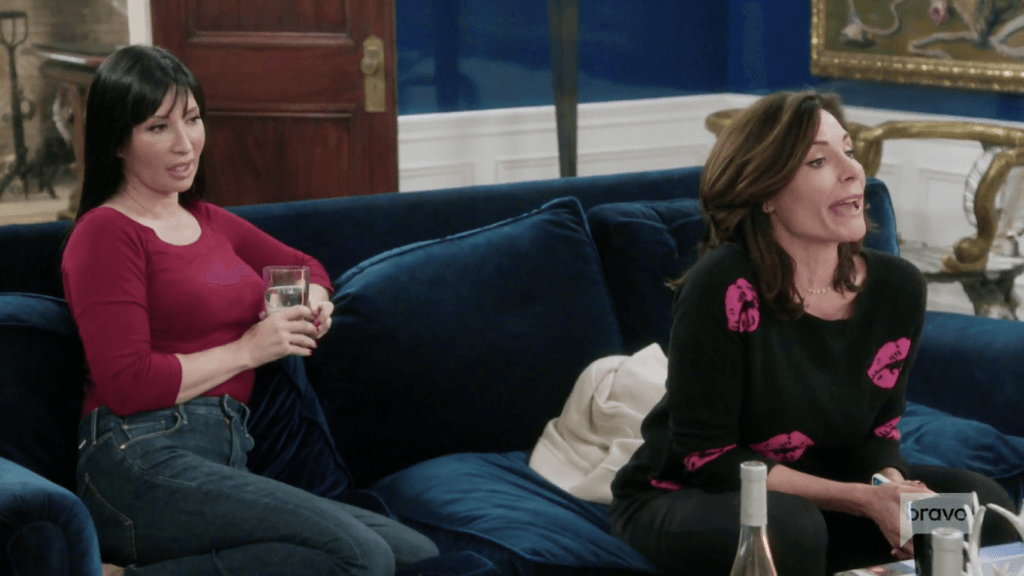 Next, Dorinda Medley brings up her own issues with Ramona. She didn’t like that Ramona called her drunk when she confronted her at the party. Maybe Ramona isn’t happy with her old friends, now that she has a new set of fancy societal pals.

And why is Ramona so mean to Elyse? Why can’t Elyse join her table at Omar? Ramona is out of excuses, so she hops up and hugs Dorinda, then sits on her lap. Dorinda feels she’s set boundaries with Ramona, and she won’t call Dorinda “drunk” again. Elyse asks if she’s one of Ramona’s special girlfriends, and Ramona kind of agrees if only to shut Elyse up. They hug it out, and Elyse puts her anger aside. 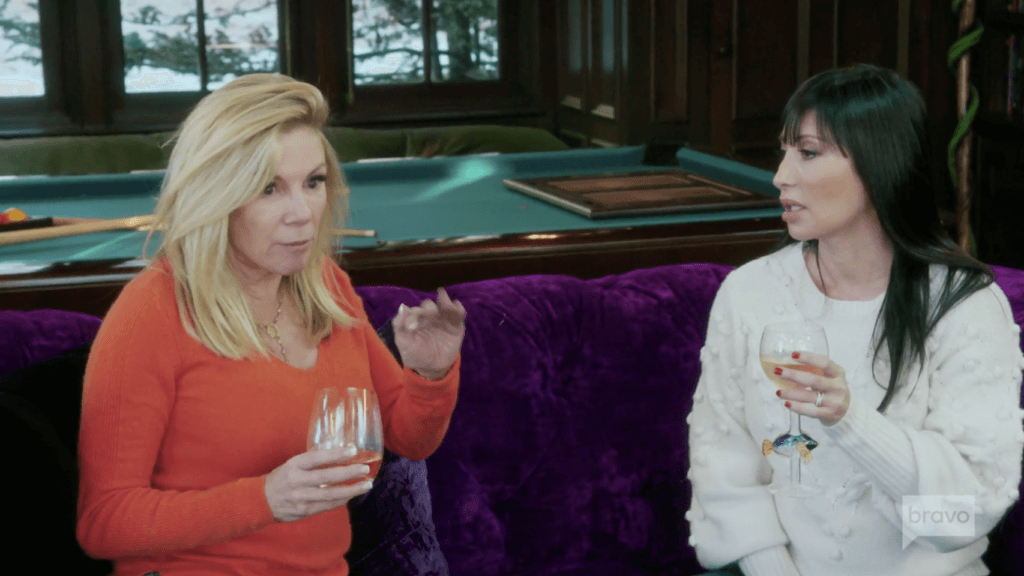 The women decide to stay in for dinner. Dorinda pulls out the Twister as Leah and Sonja talk about sex. Sonja, who’s always been the most open about her sexuality, seems shocked that Leah wants a little anilingus in her life. Sonja suddenly has standards!

The ladies want to keep drinking, but Leah knows she needs to put on the brakes. Dorinda’s house is full of breakable tchotchkes, and if she gets any more lubricated, she’ll start breaking shit.

As the ladies order Chinese food, Lu says Sonja is going to perform with her in her new cabaret show. Sonja complains that she’s still not getting paid, and that makes Lu see red. The other women think Sonja should get a paycheck. Luann did pay Sonja. A whopping two-hundred-fifty dollars, bitches! Lu has Broadway actors in her show, and they deserve to get paid, too. Lu says she doesn’t need Sonja’s presence. She’s a success, and she wanted to include Sonja, but that’s all over. Lu stalks off in a huff, calling Sonja a bitch. 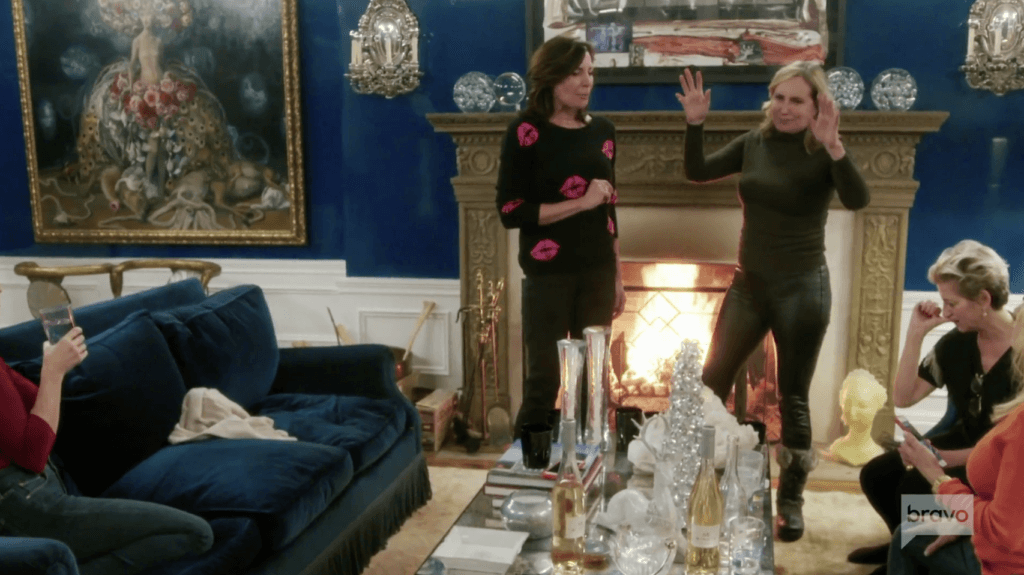 Sonja is now in tears. The other women flock around her as Lu storms around the house. Ramona tries to play peacemaker, but it’s not working. Luann is boiling. It was supposed to be a fun gig. A time for two friends to take the stage and sing a song. But if Sonja thinks she’s going to rip the spotlight from Luann, she’s dead wrong!

Dorinda says she’ll stand up for Sonja, because she’s a warrior. (Or she really needs to fight with someone — anyone — this season.) Dorinda thinks Sonja should have stood up to Luann. And if she can’t, Dorinda will do it for her. 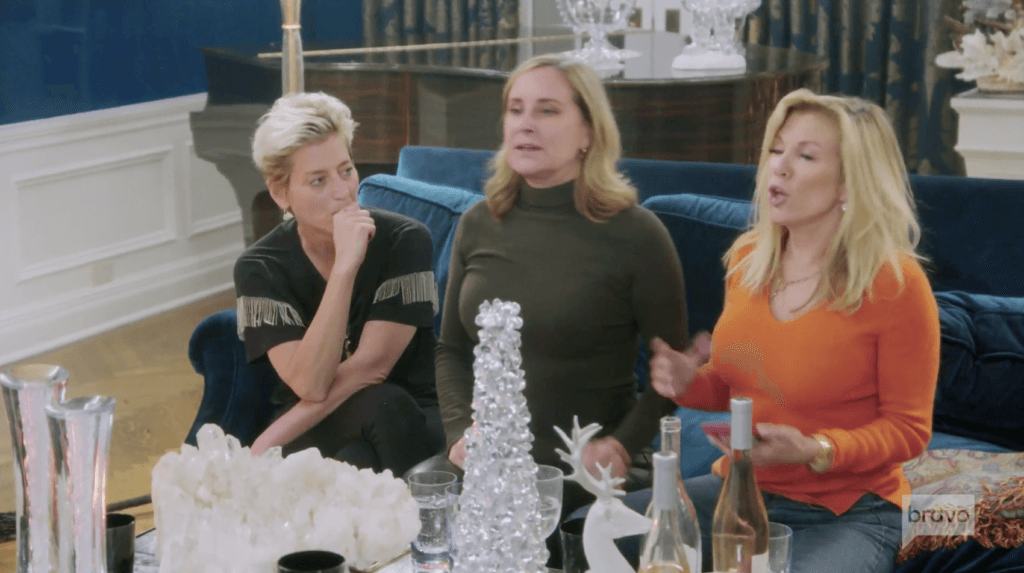 Dorinda finds Luann in the kitchen. She reminds Lu that Sonja stood by her during her sober journey. And that’s how she treats a friend?

And that ends our show. It’s always mayhem in the Berkshires, so did you enjoy this episode? Should Elyse have forgiven Ramona so easily? And why is Dorinda so darn angry this season?