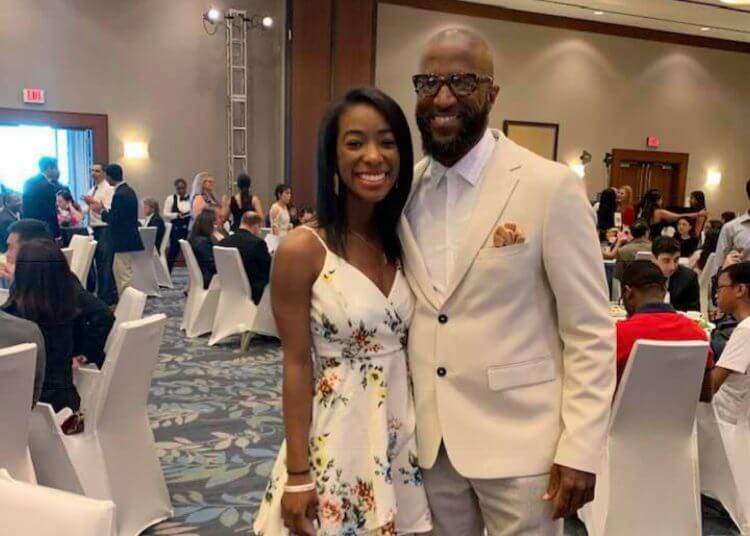 Comedian/radio show host, Rickey Smiley’s daughter, Aaryn Smiley was shot over the weekend, and is currently recovering in the hospital.

Smiley shared his disturbing news on his radio show on July 6, while discussing the widespread holiday weekend gun violence.

“I’ve been dealing with this all morning sitting up with butterflies in my stomach trying to do a show,” he said. “My youngest daughter was shot last night. Aaryn. She’s in the hospital right now.”

Aaryn, who recently marked her 19th birthday, was shot three times while driving to a fast food restaurant in Houston, on July 5. Rickey Smiley shared that he woke up to text messages about the incident, after going to bed early the previous evening. 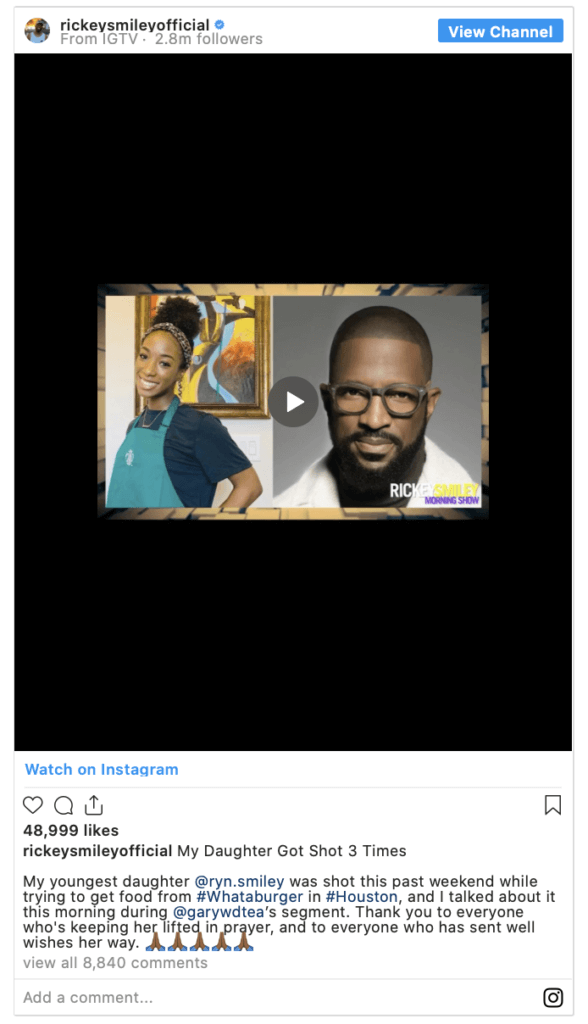 The Houston Police Department told People that one woman and three men suffered non life-threatening injuries after a shooting occurred at 6898 South Freeway in Houston, on Sunday night. The men’s vehicle was at a stoplight when an unknown vehicle drove by, firing multiple shots, according to the police. All three men were hit, and a female passenger in a second vehicle was struck in the crossfire.

Rickey Smiley confirmed that his daughter was fine, but would likely be undergoing surgery.

Rickey Smiley revealed on his show that he would be flying to Dallas before  driving to Houston, later opening up while packing for the trip. Press play below.

“I’m trying to pack a bag, don’t know what to pack, can’t think straight, nerves bad, butterflies in my stomach, my daughter in surgery. Can’t even get to her. I don’t know what to do,” he said, in an emotional Instagram post. “We’ve got to stop gun violence. Parents shouldn’t have to go through this.”

He later revealed that Aaryn was out of surgery and doing well. 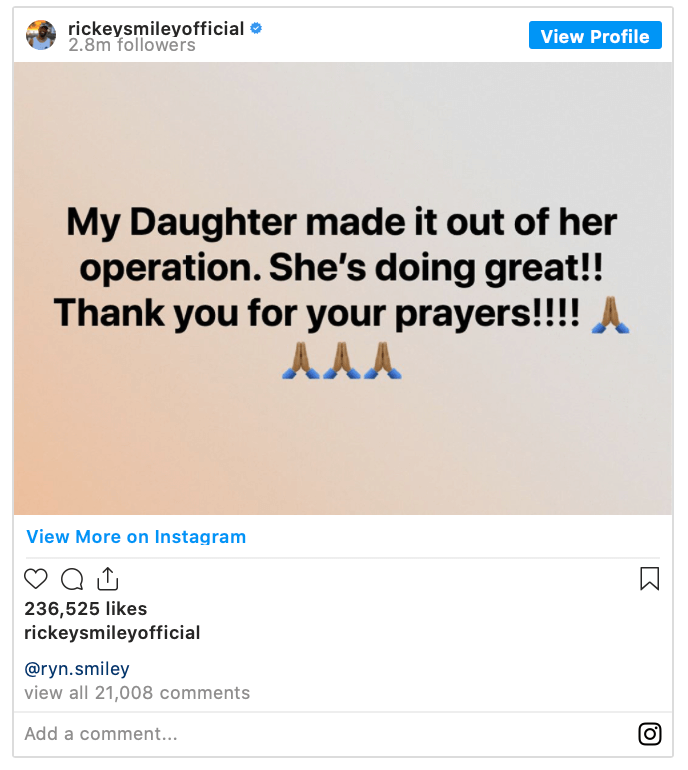 “She’s doing great!!” Smiley captioned the post. “Thank you for your prayers!!!!”

Rickey Smiley shared an update upon his arrival in Houston, sharing that he was not able to see his daughter because of COVID19 precautions. In a YouTube update, Smiley revealed that he was waiting outside the hospital for his daughter to be transferred, noting that it was “the only way we get to see her.” 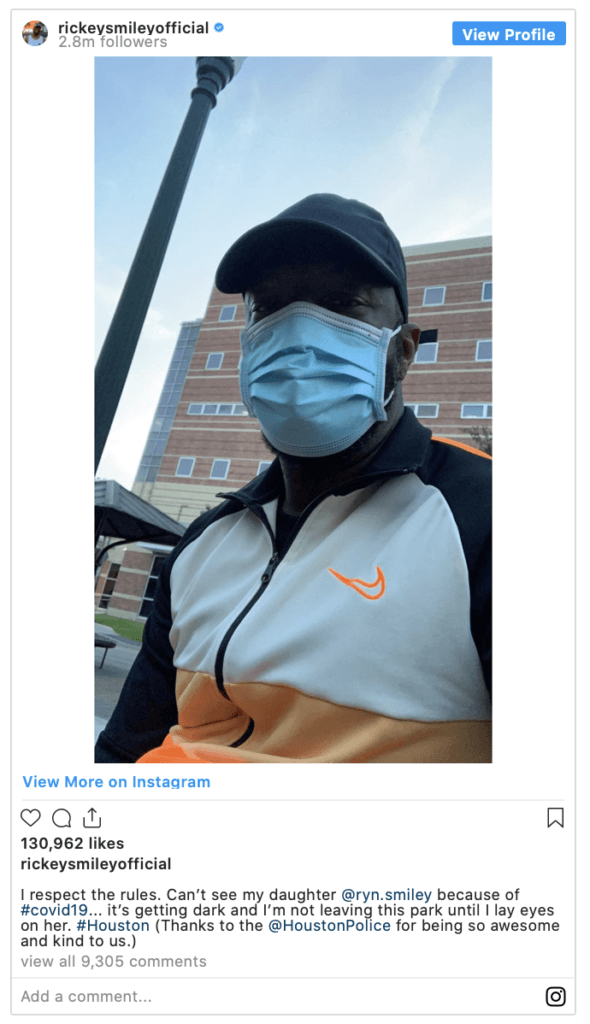 “All of this comes with parenting. Stuff happens,” Rickey Smiley said in the video. “But what an awesome God we serve because I could be standing at the front door of a funeral home, but God blessed us enough for us to be here at the hospital.”

Aaryn thanked the public for their prayers on her Instagram Story, and shared about the scary experience.

“This is the most terrifying thing that has ever happened to me. I won’t be out of the hospital for a while nor will I be able to walk for a while due to nerve damage,” she said. ”I’m so sorry if I can’t respond to everyone but please know I’m thankful for all of the messages.”

The teen revealed that she had been shot in the leg in a separate IG share, writing—”Words can’t describe how grateful I am to be alive right now.”

“Scariest part of all of this is the fact that I’m alone. They won’t let me see my parents or let anyone come in because of COVID,” Aaryn said, sharing a pic of her hospital bed. “I’m terrified.” 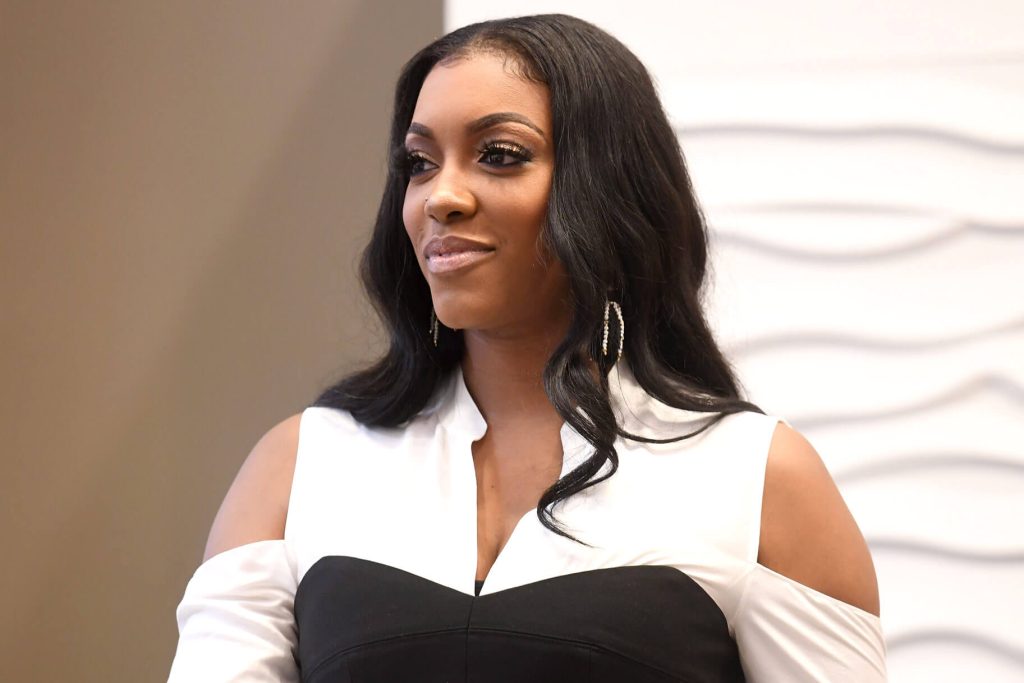 Rickey Smiley has received lots of support from his colleagues and Bravo friends, including Real Housewives of Atlanta personalities, Phaedra Parks, Cynthia Bailey, and Porsha Williams, who has long worked beside Smiley at Dish Nation. 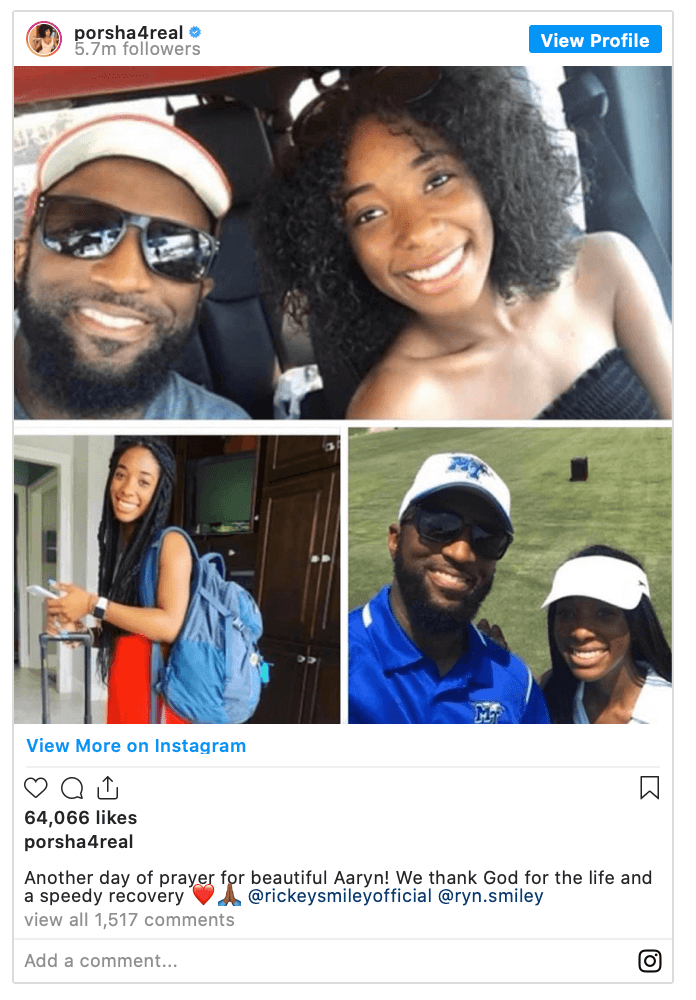 Thank you Lord!! What a mighty God we serve,” Porsha Williams commented about Aaryn’s successful surgery on her Instagram Story. “We pray for a full recovery!”