Welcome back to an all-new episode of Married to Medicine LA.

This week’s episode of Married to Medicine LA picks up right where it left off with Dr. Imani Walker confessing that she asked Phil for a divorce. She then admits to Dr. Britten Cole that she’s been putting up a front when it comes to her marriage for a long time. She also reveals that she’s the one who initiated the divorce talk but that Phil was all too eager to accept it. Britten asks if she thinks the marriage is salvageable but Imani says no. “We’ve had issues for a while.” Later in her talking head interview, she adds, “I do think Phil going out to Oklahoma was some sort of passive attempt on his part to separate. He just kind of got deeper into his own world and it became obvious that I was slowly not becoming part of it.” 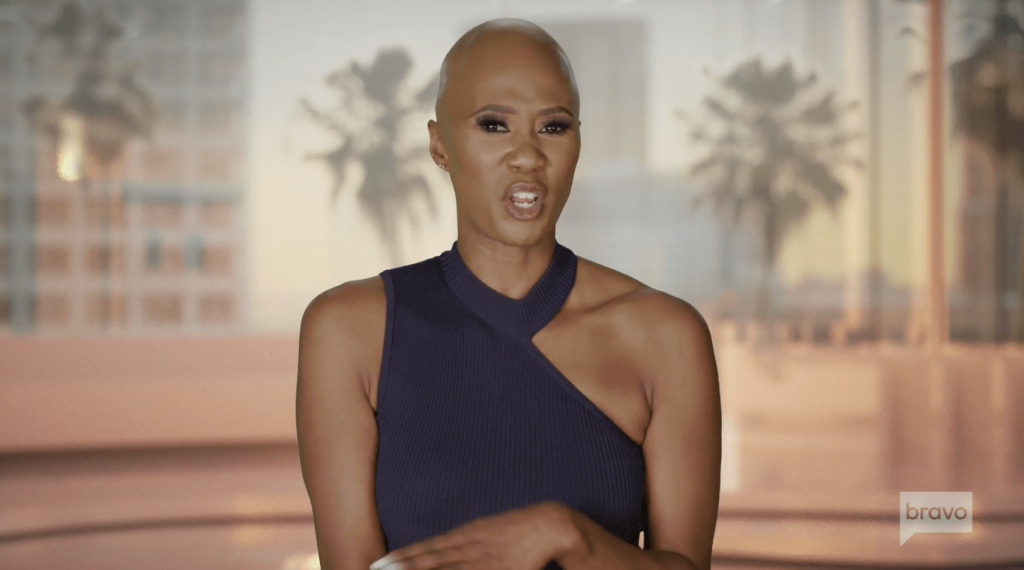 Across town, Shanique Drummond and Jazmin Johnson head out to Shanique’s surprise rodeo party without a care in the world. The guests start to arrive with Shanique and Jazmin arriving fashionably late, of course. Shanique is pleasantly surprised by the surprise rodeo party theme. When Shanique brings up Imani’s absence, Britten comes up with an excuse on the spot citing that she got called into work. Everyone needs a girlfriend like Britten! 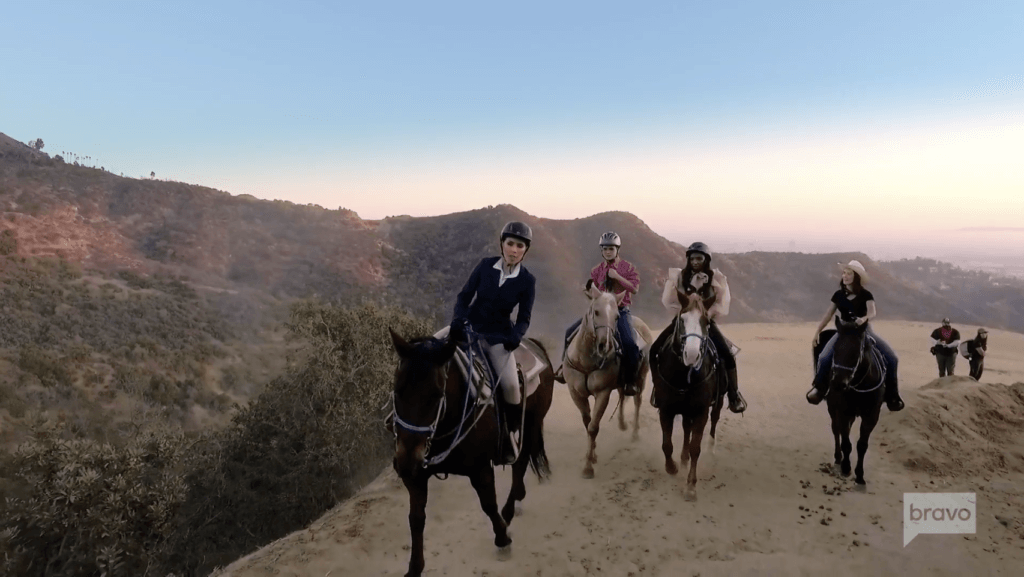 After the group gets back from their horseback riding excursion they dig into a catered BBQ buffet complete with all of the fixins. Well, everyone except for Jazmin, that is. While everyone else is digging into the mac and cheese, baked beans, cornbread and chilled sangria, Jazmin opts for a lean chicken breast and a refreshing glass of… water. According to Jazmin, sangria has way too much sugar. She takes it one step further when she walks over to fitness student, Dr. Kendra Segura, and tries to snatch the cornbread off of her plate. “You can’t have cornbread. We’re on a diet, remember?” she reminds her. Kendra looks at her in shock as she begrudgingly hands over the carb-laden goodness. Britten calls Jazmin out screaming, “Are you policing her food?!”

Jazmin tries to defend her stance by saying, “There are certain foods that make your sugar increase higher than they should and they take you out of a fat-burning state. I take fitness seriously. I also teach a lot of people. I’m advanced. I’m not intermediate or beginners.” Meanwhile, Lia Dias is at the other end of the laughing under her breath. Jazmin quickly calls her out for being rude and condescending. Lia stops laughing. “Not today,” she snaps back. 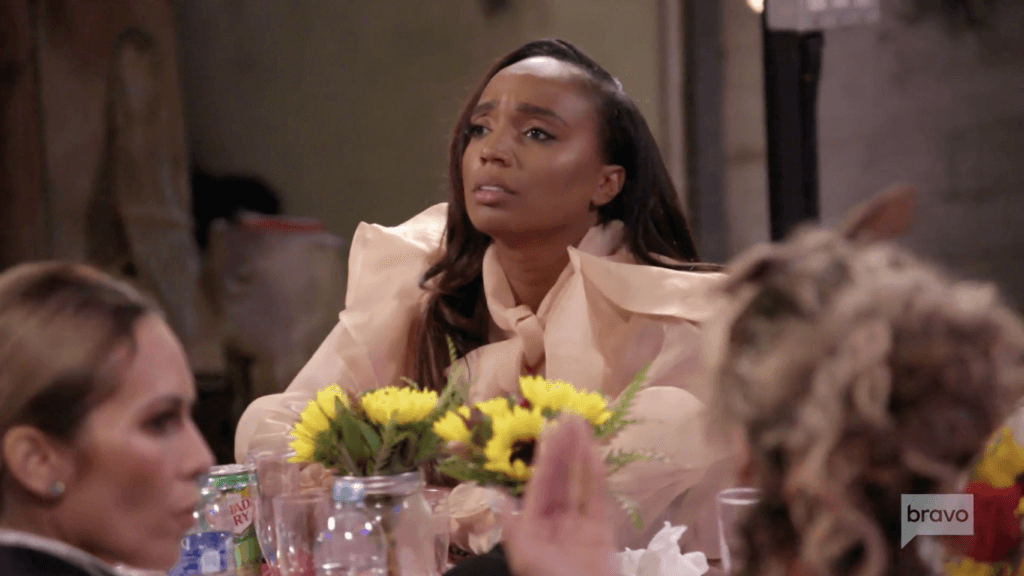 Jazmin then accuses Lia Dias of losing all of her “street cred” after getting caught being a shady boots and making fun Kendra’s air force one outfit. Britten once again pipes up as the voice of reason when she questions Jazmin’s use of the term “street cred” and reminds her that they both live in Beverly Hills. TOUCHÉ. 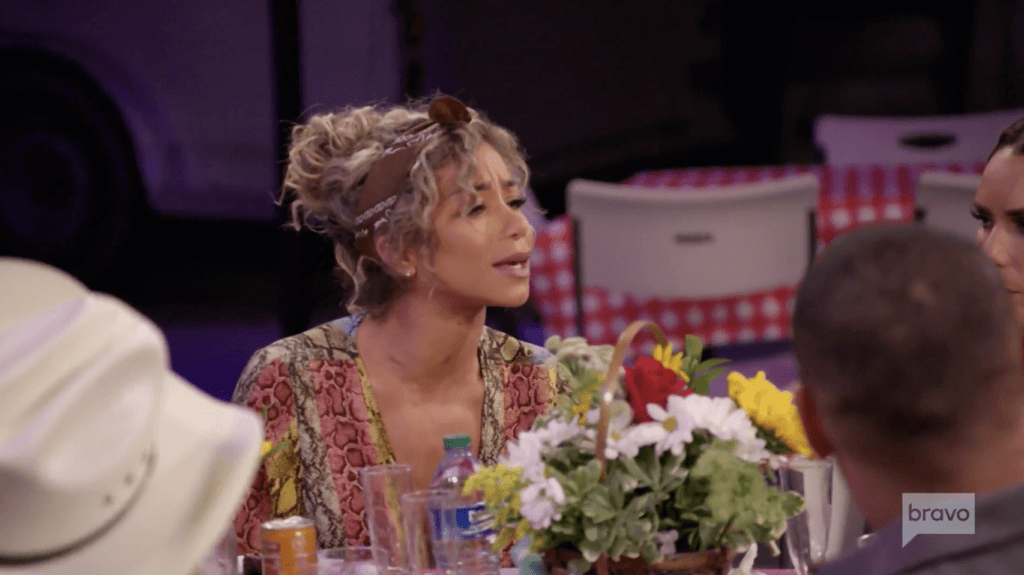 Meanwhile, Lia just rolls her eyes and shakes her head. Shanique tries to mediate and advises the ladies to try and hash it out at another time in a different setting. Lia interrupts and starts screaming, “I don’t want it with you girl. I don’t. I really don’t. Find somebody else to have it with. You want it with me so bad.” Meanwhile, Shanique’s husband, Dr. Robert, is hastily searching in his pockets for some Tylenol. Poor guy. Shanique eventually manages to diffuse the situation and the group gets ready to participate in line dancing lessons. All’s well that ends well at the surprise Rodeo ho-down throw-down. Good riddance. 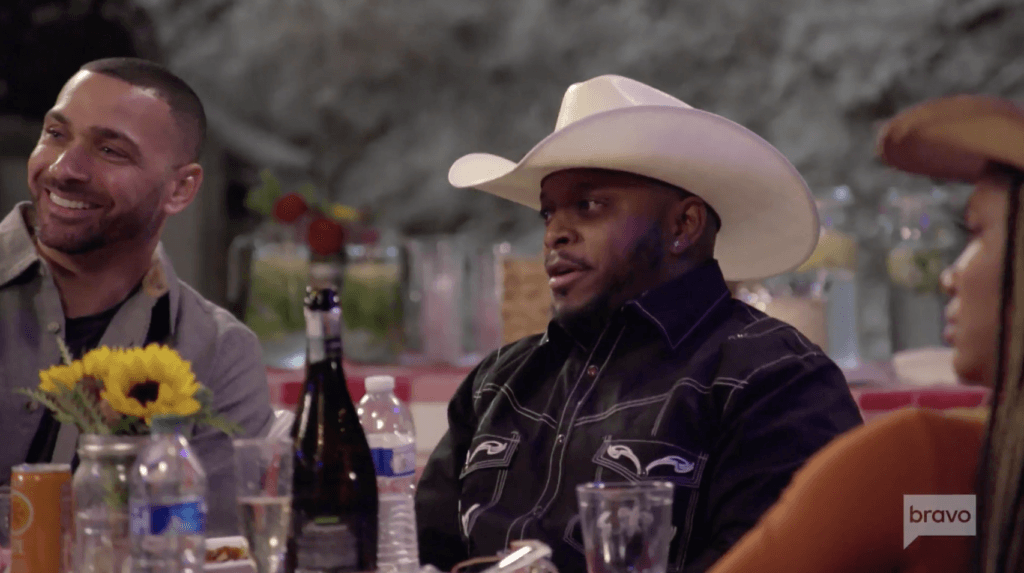 The next evening, Imani’s mother, Paula, stops in to check on her. Imani confesses to Paula that Phil is now refusing to even come back to Los Angeles to collect his belongings. She’s now left to clean up the proverbial mess that is their marriage AND explain the separation to her son Idris – all by herself. “He’s a person who you are describing as emotionally unavailable and so you have to be prepared to accept the person exactly as they are,” Paula advises. She then adds, “You’ve got to talk to your son. Tell him as soon as you can.” Imani is adamant that she cannot allow Idris to find out about the separation via FaceTime with Phil. Later Imani confesses that Idris and Phil are still very close and she hopes that they can remain close no matter what. 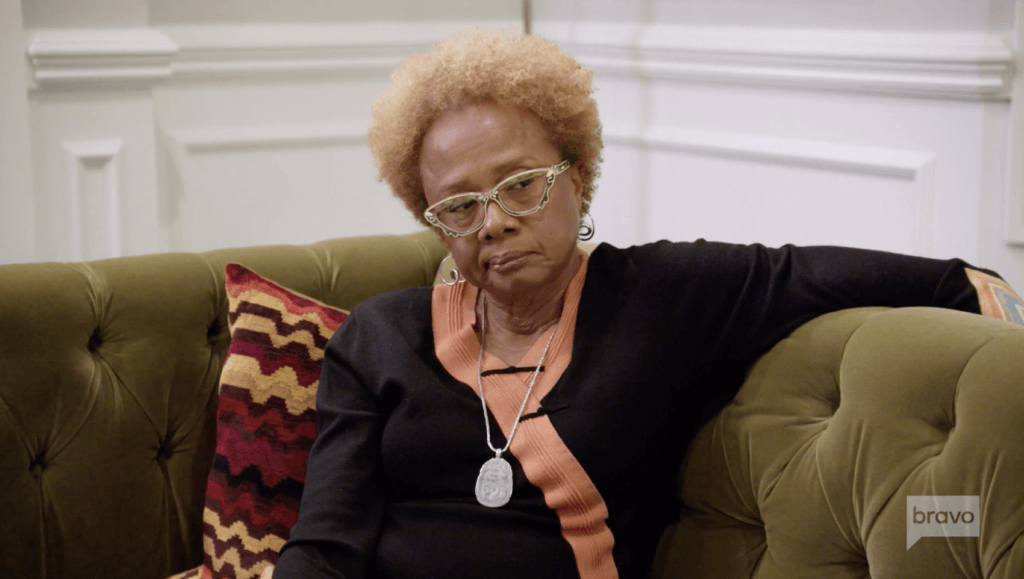 She then mulls over the idea of telling the other ladies. Her mother has a no-nonsense attitude when it comes to the idea. “Well they speculated but they were right. Your narrative has to be that ‘this is my life.’ It is what it is. Some people are gonna say ‘ooh I knew that was happening.’ Some people are gonna say ‘I’m really sorry to hear that.'” Imani receives the advice her mother gives her but is adamant that she still needs more time to think it over. 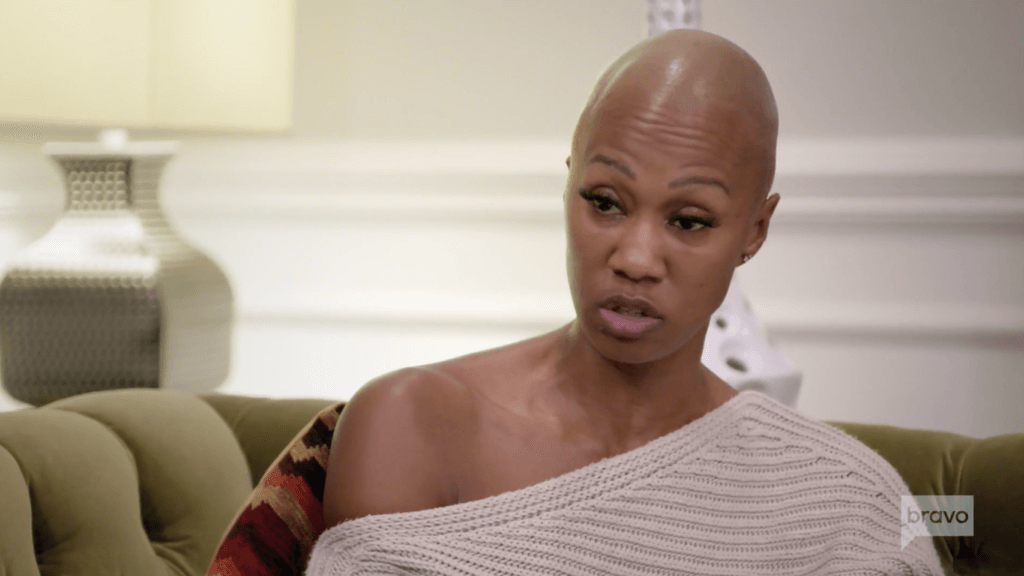 While one marriage is disintegrating right before her very eyes, Britten resolves to bring the spice back into hers with whips, chains and whatever else she can think of. It turns out that she’s planned a date for her and Mack sans their two children. The plan is to drop off the kids at Shanique’s house so they can have some alone time.

Across town new parents, Kendra and Dr. Hobart also embark on a date night of their very own. As they decide on what to eat Hobart asks Kendra what her “diet coach” Jazmin would say about her eating lamb chops. Kendra is adamant that she still wants to take the diet seriously but that right now getting her career back in order is her main priority. She then drops a bomb and confesses to Hobart that she went on a job interview… for a full-time position. She then takes it one step further and discloses that they offered her the position. Hobart is none too pleased. “So you’re going from two maybe three days and now you’re doing full time in the hospital. Surgery. Tired. Milk production goes down. Come home. Bad attitude.” When she presses him on his stance he adds, “I think most women would envy your position in having the luxury of staying home a little longer.” 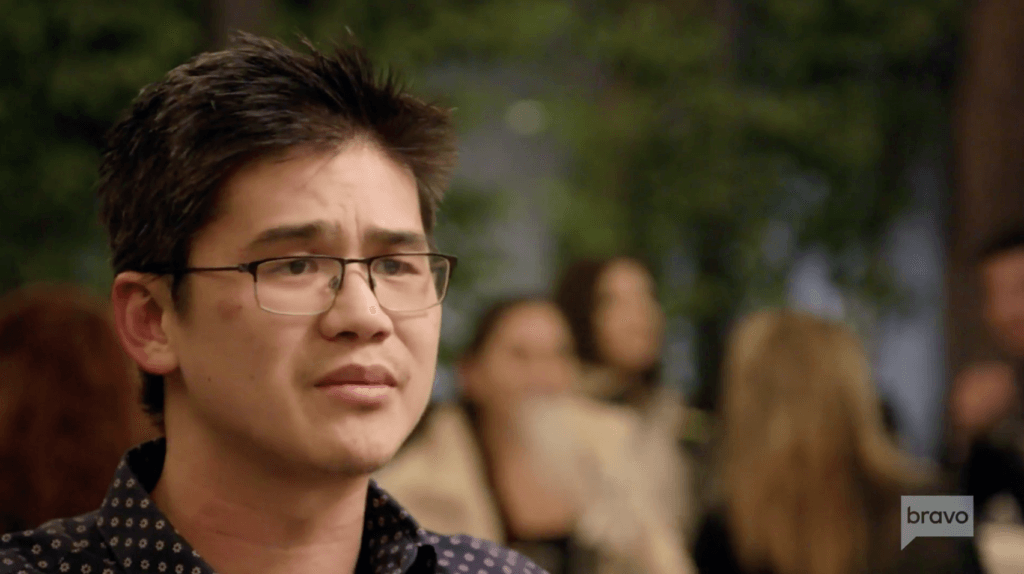 Kendra, however, doesn’t see it that way. Later in her talking head, she asserts that her talents “are not best served to be full-time at home. I can be a mother and I can be a physician and I’m done feeling guilty about either.” The dinner abruptly ends when Kendra announces she’s no longer hungry anymore and Hobart agrees. Somewhere a wafer-thin Jazmin is smiling from ear to ear that her master diet plan is working. 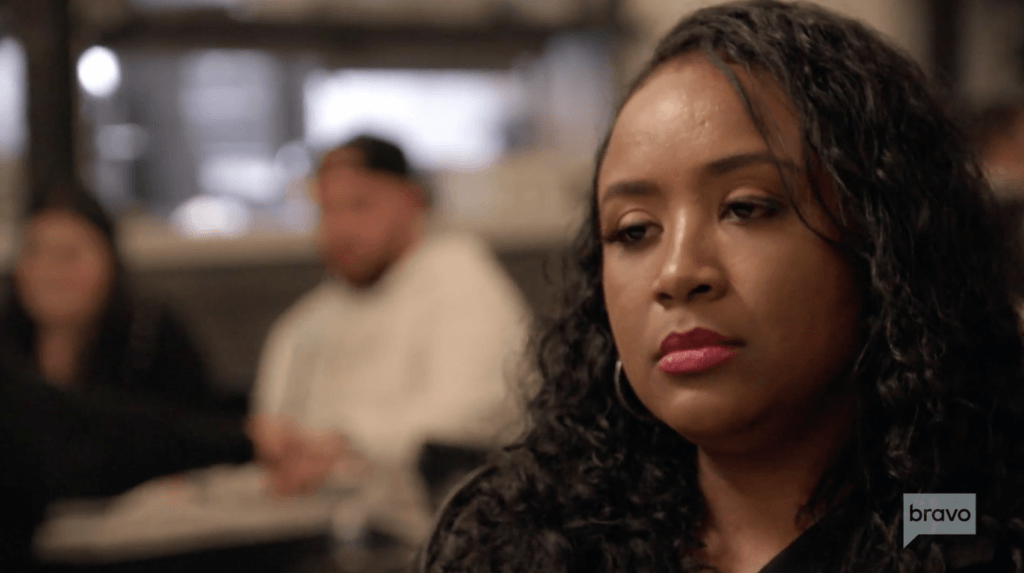 The next day, Britten looks very refreshed when she arrives at Imani’s. The plan is for all the ladies to come over and help Imani pick out a photo for the cover of her new book. Britten cuts to the chase and asks Imani if she has plans to deliver the news to the rest of the ladies. Imani admits that she’s still trying to figure that out. She is most concerned with how the rest of the ladies will receive the information. She confesses that she wants and needs the ladies to be supportive right now but she’s not sure they will be. 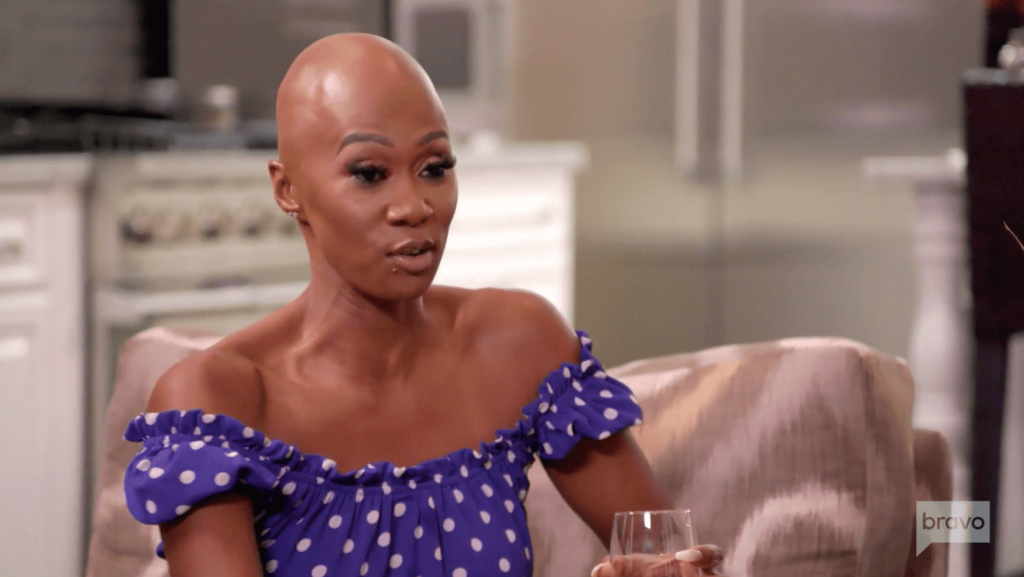 The ladies eventually arrive. Kendra walks in and eagerly accepts a glass of sangria but Jazmin reminds Kendra that sangria not in the diet plan. Kendra dismisses Jazmin and says “I know. Girl we gotta talk,” and leaves it at that as she takes a long, refreshing swig of syrupy sweet sangria.

Imani invites everyone into the living room explains that she gathered them all together to help her pick out the photo for her book. She explains that the book is about mental health but more than that it is a symbol of the growth she experienced while writing it. She then presents the ladies with several photos that are so similar they could be mistaken as being the same. The ladies all have a good laugh before Shanique asks her if Phil’s seen them and which one is his vote. Awkward… 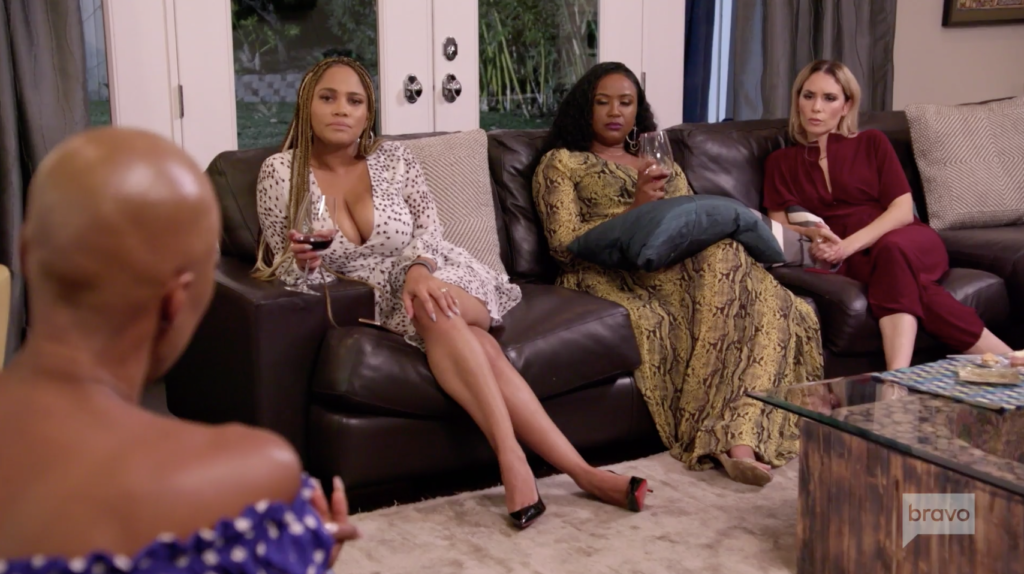 How will the rest of the ladies receive the news? Will they rally around Imani or will they give her the old “I told you so” stink eye? Tune in next week to find out!