Welcome back to an all-new episode of Married to Medicine LA. The episode opens with Jazmin Johnson paying Dr. Kendra Segura a visit in an attempt to help her with her health and fitness goals. According to Kendra, she used to be a slim, trim, competitive tennis player… but then medical school, residency and pregnancy happened. “At my skinniest when I was working out the most I was a size six. Now I’m a size 16,” she confesses. While, I applaud Kendra’s efforts to want to get back into her healthiest self, not sure if Miss eggwhites and salmon with no seasoning is the ticket. I’m no doctor but I’m pretty sure being skinny doesn’t always equate to being healthy. 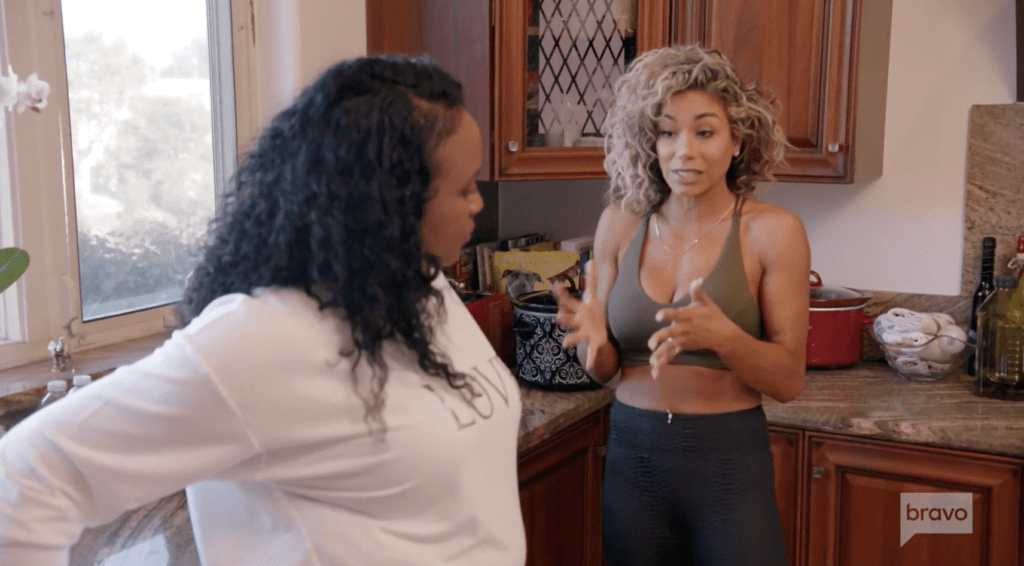 Across town at the California African American Museum, Dr. Imani Walker and Dr. Britten Cole  are having a much more serious conversation when they are tasked with trying to explain to their children why people of color are still being racially profiled and discriminated against in the year 2020. Imani reveals that her son, Idris, was recently called the n-word at school and shares with Britten that she was also called a “dirty n-word” in grade school by a fellow classmate.

The next day, Kendra is hard at work-no not at the clinic-but at an upscale lunch spot trying to convince Lia Dias that she should hash things out with Shanique Drummond. She’s also chowing down on a breakfast bowl that I’m positive is not part of the meal plan her new trainer, Jazmin, created for her but I digress… Lucky for Kendra her efforts and the calories she consumed were not in vain as Lia eventually caves saying, “as long as she’s (Shanique) game, I’m game.”

Speaking of Shanique, she has been working overtime as well-preparing a PowerPoint presentation. The PowerPoint is supposed to serve as a tool to convince her husband Robert that she should make the leap into the world of real estate. Unfortunately, her sidekick Jazmin isn’t as impressed and immediately starts peppering her with the hard-hitting questions that she’s convinced Robert is going to ask. “I know as your friend, there’s no doubt in my mind, that you’re going to succeed. But it’s not going to be easy. I just want you to be prepared because I know how these men are. Don’t really rely on his support,” she advises her. Shanique is moved to tears and thanks Jazmin for the support as they hug it out. Hey… maybe Lia was right. Maybe they do share a brain…

Imani’s mother Paula comes for a visit and we’re treated to a glimpse into their mother/daughter dynamic. It becomes very apparent that even Paula is not happy with Imani and Phil’s current living arrangement. When Imani asks why she should be expected to live in the same house as her husband her mom responds saying, “I don’t know that I espouse ‘hey let’s be married and have separate houses.'” Later in her talking head, Imani confesses that she and Phil eloped and Imani didn’t inform her mother that she was even married until three or four years later. Aha! Suddenly it all makes sense as to why Paula isn’t too keen on Phil. 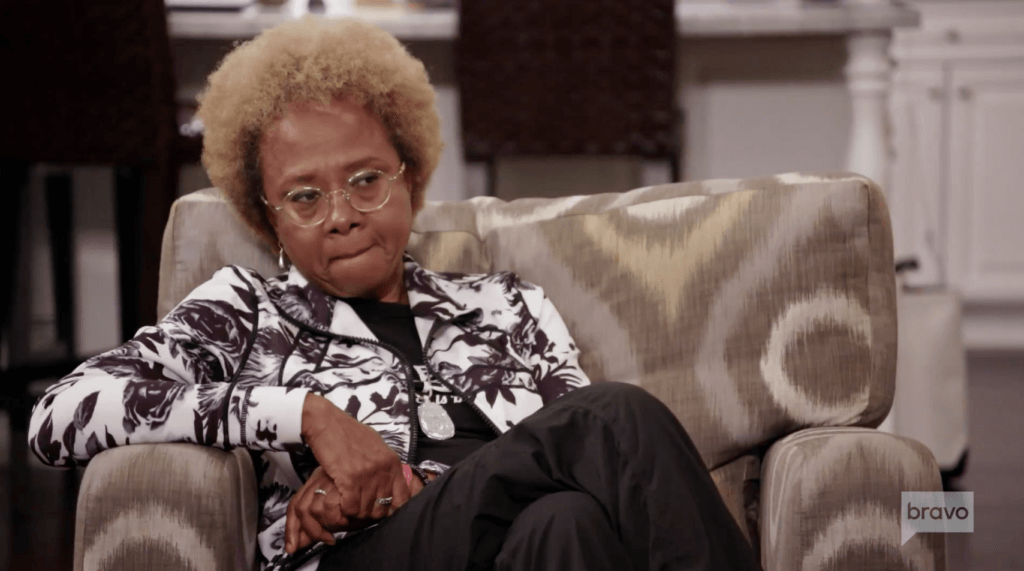 The next day, Shanique and Lia reluctantly arrive at the winery to squash the drama. Kendra is running very late (probably all part of her plan) and the two are left to awkwardly engage in small talk and scroll on their phones while they tap their foot. While waiting, the two bond over the fact that they are wearing the same outfit and both have daughters named Kayla. #TWINNING

Kendra eventually arrives in the airforce jumpsuit that started it all. The three sit down and in between large gulps of Sauvignon Blanc, Shanique and Lia attempt to get to the root of their issues with one another. Shanique admits that she felt insulted after Lia called her messy. “For me, when I feel that way, I just get in attack mode,” she confesses. 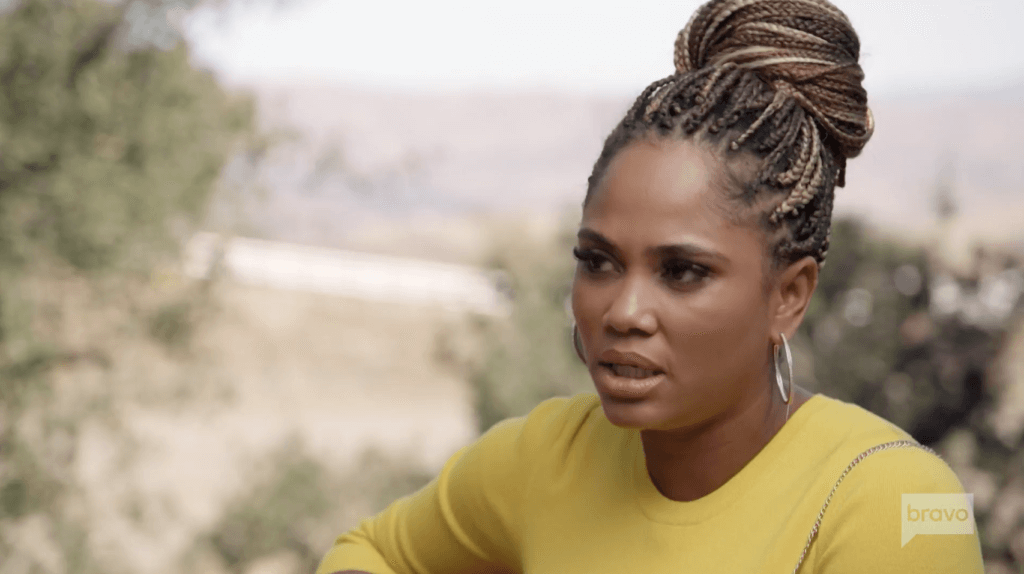 She admits it wasn’t appropriate and says she hopes they can both move past it. Lia also apologizes and the two hug it out. Shanique then fishes an amazonite stone out of her bra and presents it to Lia as a peace offering. All’s well that ends well. For now anyway. 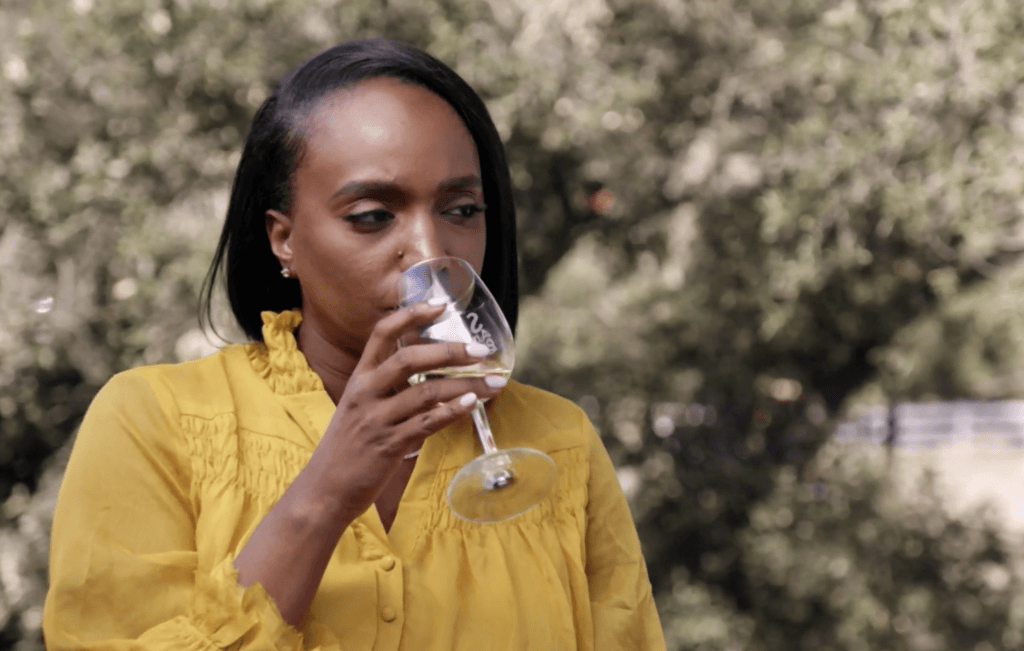 The next day Imani, Britten and Contessa Metcalfe head off to New Orleans. After checking into their luxurious albeit creepy house rental, they head to an upscale restaurant in the heart of NOLA. Once seated they all trade jokes about not being able to afford to eat somewhere like that while in medical school. The Popeyes come up game is strong.

The mood, however, quickly turns somber when the subject of Imani’s long-distance marriage comes up. Imani maintains that Idris has adjusted well to the sudden absence of Phil but admits that it’s been hard on her. She also reveals that Idris’ biological father is not in the picture as she essentially got knocked up by him in her second year of residency. “Things didn’t work out well between myself and Idris’ father but the best part is that I have Idris.” She also admits that she has a habit of being attracted to charming, attractive men who also happen to be full of BS, much like her own father. 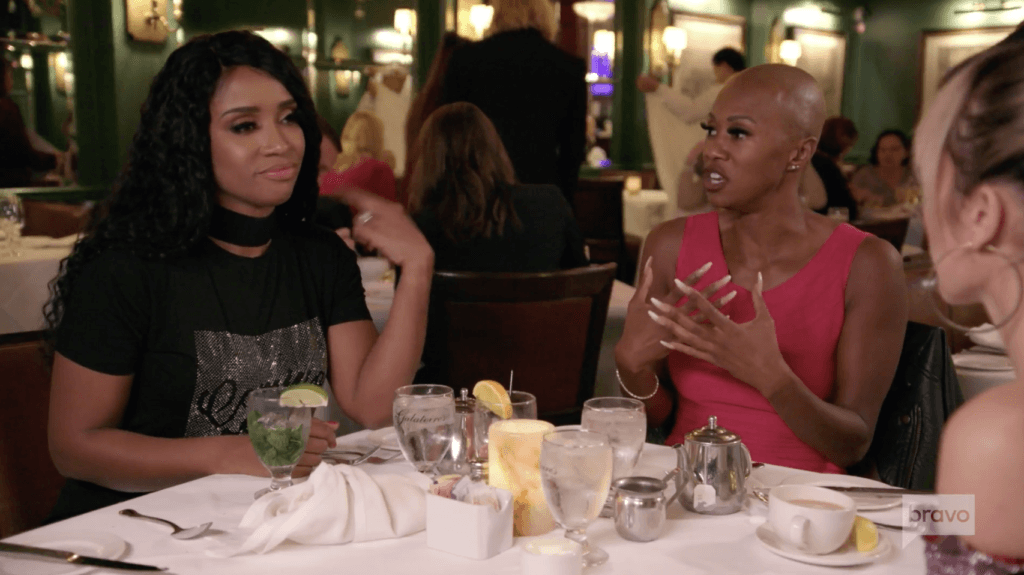 The conversation quickly switches gears and moves on to Britten’s relationship. While she and Mack are still sleeping under the same roof, they’re definitely not sleeping in the same bed, or in the same room for that matter. Britten, however, makes no apologies for it and admits that she doesn’t want her son out of her bed. Contessa presses Britten on how she and Mack are able to have intimacy with the children in their bed and Britten responds unapologetically, “we don’t.” YIKES. 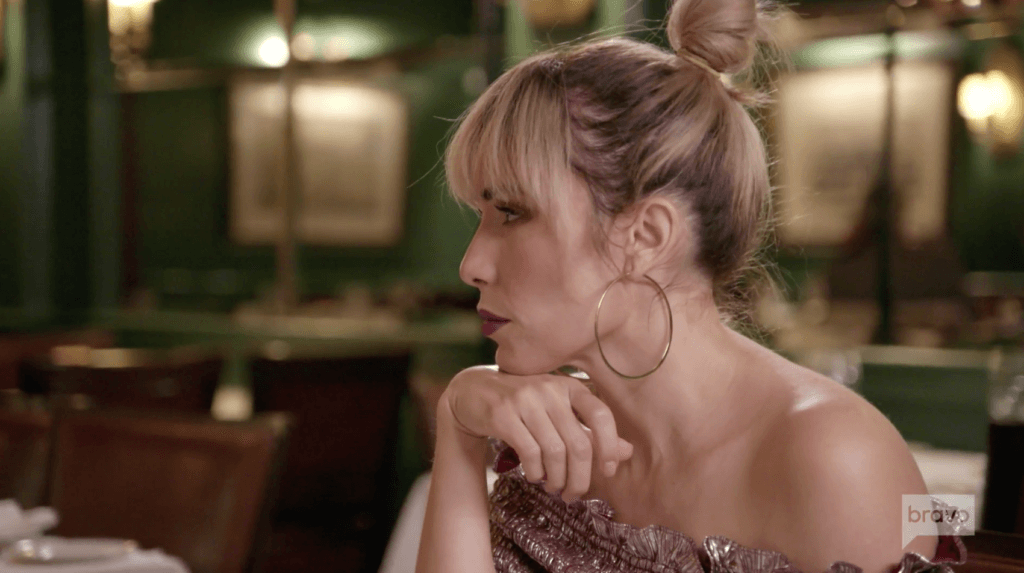 Will Imani Walker tell Phil it’s time to come home? Will Britten finally kick her son out of the marital bed? Or will Imani and Britten both choose to remain in sexless marriages? Tune in next week to find out!