Welcome back to an all-new episode of Real Housewives of Beverly Hills — the shady boots astrology chart reading edition. Let’s get started!

This week we learn a little more about Garcelle Beauvais as we get to watch her interact with her “core group of girlfriends” aka her friends in real-life. One of the women happens to be none other than Will Smith’s ex-wife, Sheree Zampino. Now for the real tea- we learn during this week’s episode that GARCELLE ALSO DATED THE FRESH PRINCE. UM WUT?! 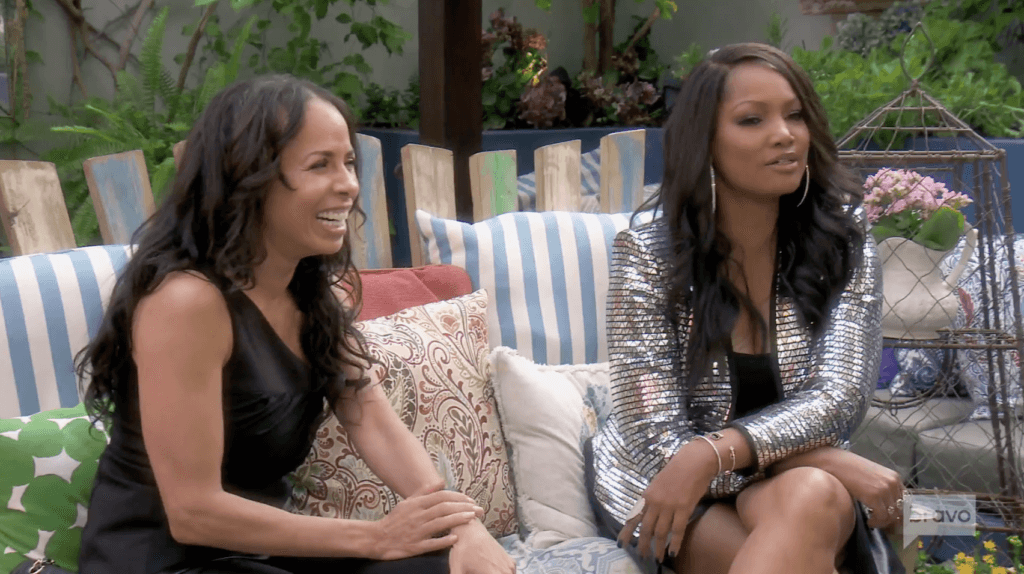 Meanwhile, Denise Richards is helping her daughter Sammy get ready for homecoming. According to Denise, this year’s homecoming is extra anxiety-inducing as Sammy is going with a boy that she really likes. In true mother-daughter fashion, Denise and Sammy bicker back and forth about how short is too short regarding the hemline on her dress and whether or not she should dye her entire head pink. Good times.

Erika Girardi gives Kyle Richards a call and they discuss Denise’s behavior when she essentially read Kyle for filth over dinner a few nights prior. Kyle is convinced that Denise is now trying to craft a “holier than thou” image in an attempt to overcompensate for last season’s happy ending talk. And that’s exactly where these two lose me. Is it not possible for Denise to be a good time gal around her girlfriends but a helicopter mom too? One does not necessarily negate the other. She’s allowed to shield her children from inappropriate subject matter while also choosing to engage in it herself when they’re not around.

Speaking of mothers, Lisa Rinna is still desperately trying to save face and make us understand why it was imperative that her daughter drop out of college, flee New York and promptly move right back into the family nest. It’s obvious to anyone watching that she and Harry are on entirely different pages as to what spurred the move back home. Harry lets the cat out of the bag when he alludes that it was the strenuous classload and personal differences with her roommate that eventually resulted in Amelia coming home. Not the crippling anxiety that Lisa would rather us think. Oopsie. Lisa, honey, I’m gonna steal a line from your own book when I say, “JUST OWN IT.” It’s okay that your daughter went off to college on the other side of the country and then quickly realized it wasn’t for her. Millions of teens do that.

We’re also subjected to a completely manufactured scene by Erika Girardi when she arrives at the dance studio and her instructor surprises her with a video message from the cast of Chicago sending her their well wishes. Once again, Erika is moved to crocodile tears. She half-heartedly attempts to dab the tears away while the instructor awkwardly looks on probably wondering what the hell he ever did to get to this rock bottom point in his career.

Dorit Kemsley is still trying to make Buca di Beppo happen but the owner, Robert Earl, seems to be having second thoughts. When Dorit asks him to rate her level of commitment to the partnership he gives her a solid… three. While Dorit and PK want everyone to believe that he approached her to design one of his dining rooms it quickly becomes apparent during the meeting that they obviously approached him. For what reason I still don’t know, but I’m gonna guess it has something to do with trying to settle the score with the Queen of Restaurateurs herself, Mrs. Lisa Vanderpump. Just picture it Dorit: Bucca di Beppo now… Olive Garden next. The world and all you can eat breadsticks is your oyster. 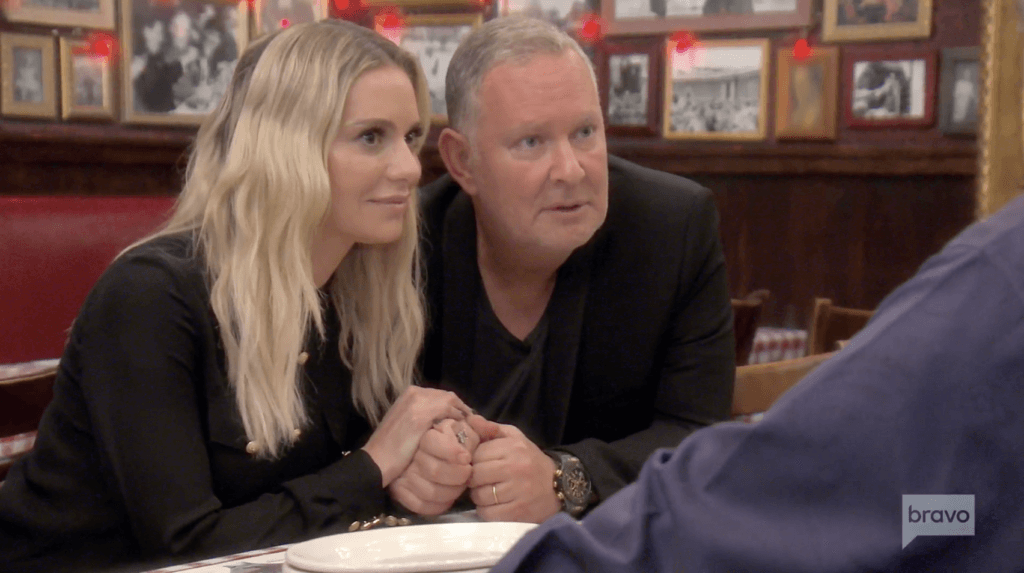 Later, Kyle Richards is doing her own glam (ahem, Dorit) and getting ready for Erika’s dinner party/astrology reading when she calls Sutton Stracke. Kyle asks how Sutton’s feelings after her intense altercation with Dorit and Sutton quickly admits she lost her mind for a minute. Kyle vows that if anyone is mean to her at the dinner party she will “kick their ass.” Noted.

Later that evening, while waiting for the guests to arrive, Erika gives Tom the rundown on the new ladies. When Erika asks if he would like his own chart read, he politely declines citing “attorney/client privilege.” Later Tom proves to be the ultimate host as he recounts stories with the ladies about starring in John Wayne films and winning them over with his charisma and charm. Ugh that man is just too precious for words.

The ladies eventually move into the dining room and all bets are off once the handsome astrologer, Shawn, arrives. Ladies, have we learned nothing about utilizing psychics, mediums and astrologers as dinner party entertainment? Somewhere Allison Dubois is taking a long drag from an electronic cigarette while pushing pins into a voodoo doll that looks exactly like Kyle while chanting “KNOW THAT” over and over again. 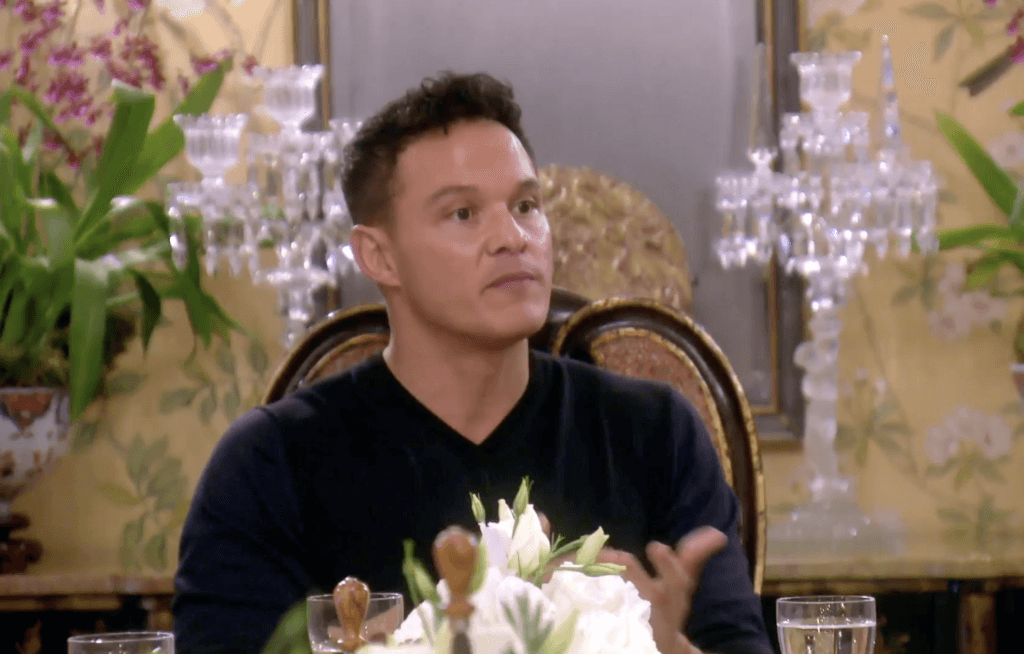 Shawn wastes no time and immediately gets to work. Now this is the part of the episode that wreaks of storyline manipulation. According to Shawn, the best way to deal with Erika is to “stick to the facts.” He says that Kyle gets worked up when someone is being treated unfairly. He then sets his sights on Denise and insinuates that she’s hiding something and describes her as “calculating and conspiring.” When it comes to Lisa, everyone knows where they stand with her. Garcelle aka Cindy Lauper just wants to have fun. Dorit is really tough to reel in once she gets upset. Sutton is opinionated. Last but not least, Teddi is boring. JUST KIDDING. He didn’t say that. He said in group settings she latches on to one person she’s comfortable with-ahem, Kyle. 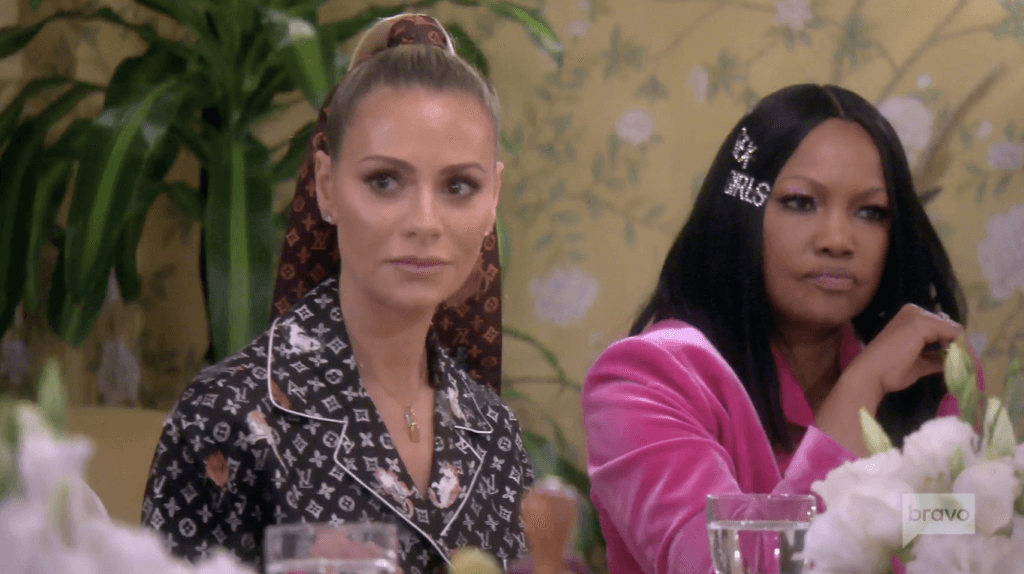 How is it that Shawn is able to effortlessly pick up on the same characteristics the ladies all currently despise in one another? Either this man was hiding under the table at the restaurant a few nights ago or the producers put a little bug in his ear.

The ladies immediately latch on to Teddi’s reading and run with it, claiming that Kyle and Teddi come as a package deal and they just need to cop to it. Dorit then accuses Kyle and Teddi of attending couples counseling together. It’s apparent that even Dorit doesn’t believe this but is rather just grasping at straws so it looks like she has a leg to stand on. 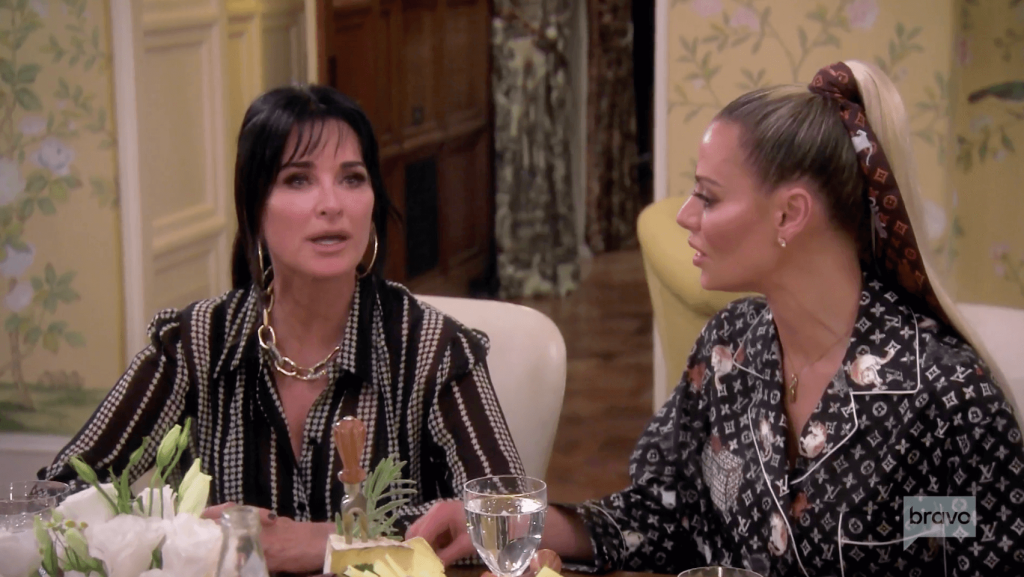 Somewhere along the way the fight goes from Kyle to Dorit to Sutton and Dorit. Sutton Stracke once again presents herself as not quite strong enough to be in the same arena with these ladies as her voice quivers and she’s immediately reduced to tears. “I didn’t deserve that,” she screams referencing the beating she took by Dorit at the restaurant. Like clockwork Kyle comes to Sutton’s defense.

Erika Girardi steps in and reminds the ladies that they are guests in her home before corroborating Dorit’s claims about the strange relationship that Kyle and Teddi share together. According to Erika the fact that Kyle and Teddi went to any therapy session together whether it be for breathing, anxiety, or whatever confirms that they are indeed a package deal. “The relationship is STRANGE,” she says. 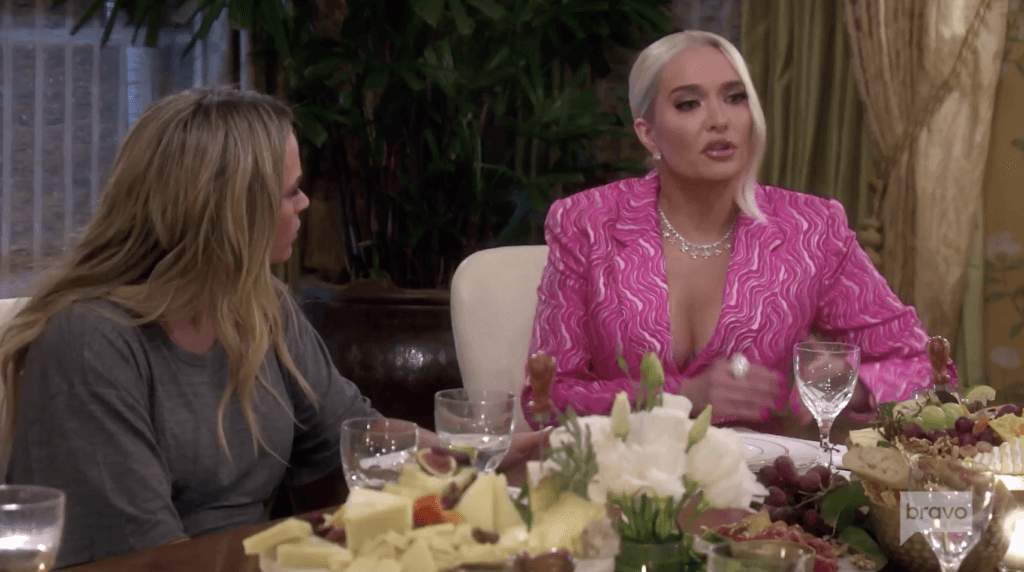 Kyle Richards launches into a tirade about how it’s not weird at all before accusing Erika of thinking it’s weird because she doesn’t have any good friends. Oh no. Oh no. Kyle, you’ve done it now.

Erika sees red before responding, “You’re so out of line. I’m not even gonna be insulted by something so wild like that. And I actually do have good friends. And I actually consider you to be one of them.” Or maybe the proper tense would be “considered”? 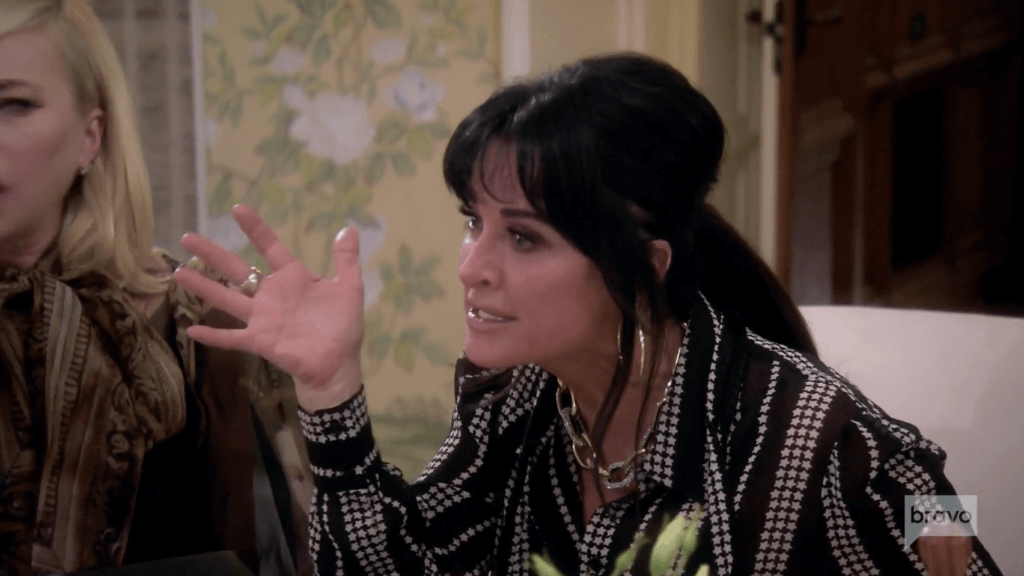 Has Kyle Richards sealed her fate with Erika Girardi once and for all? Tune in next week to find out!