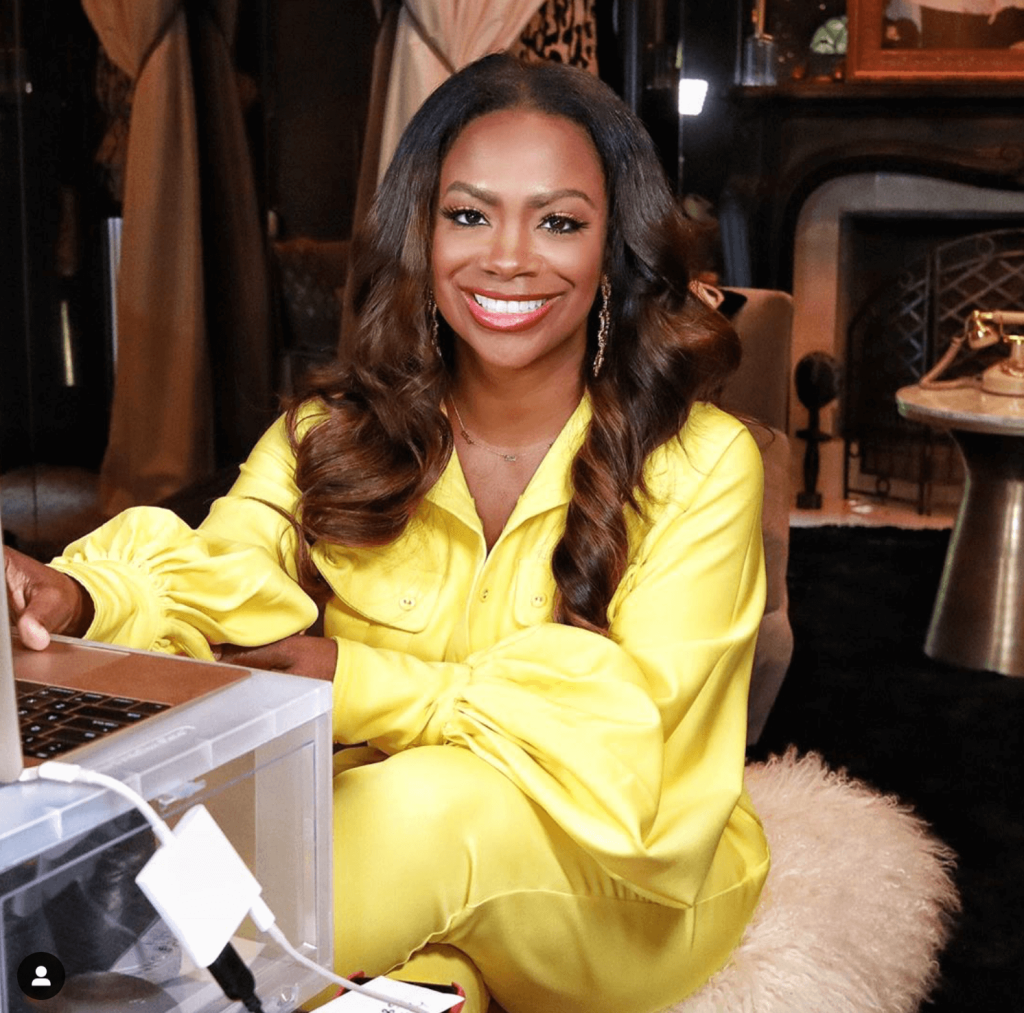 Kandi Burruss released a snippet of her new song Wednesday night following her win on The Masked Singer — but fans are not cheering her on.

Kandi Burruss (The Night Angel) became the third winner and the first woman to take home the golden trophy on Fox’s The Masked Singer. Kandi Burruss beat out her final two competitors, Bow Wow (Frog) and Jesse McCartney (Turtle) for the coveted win. 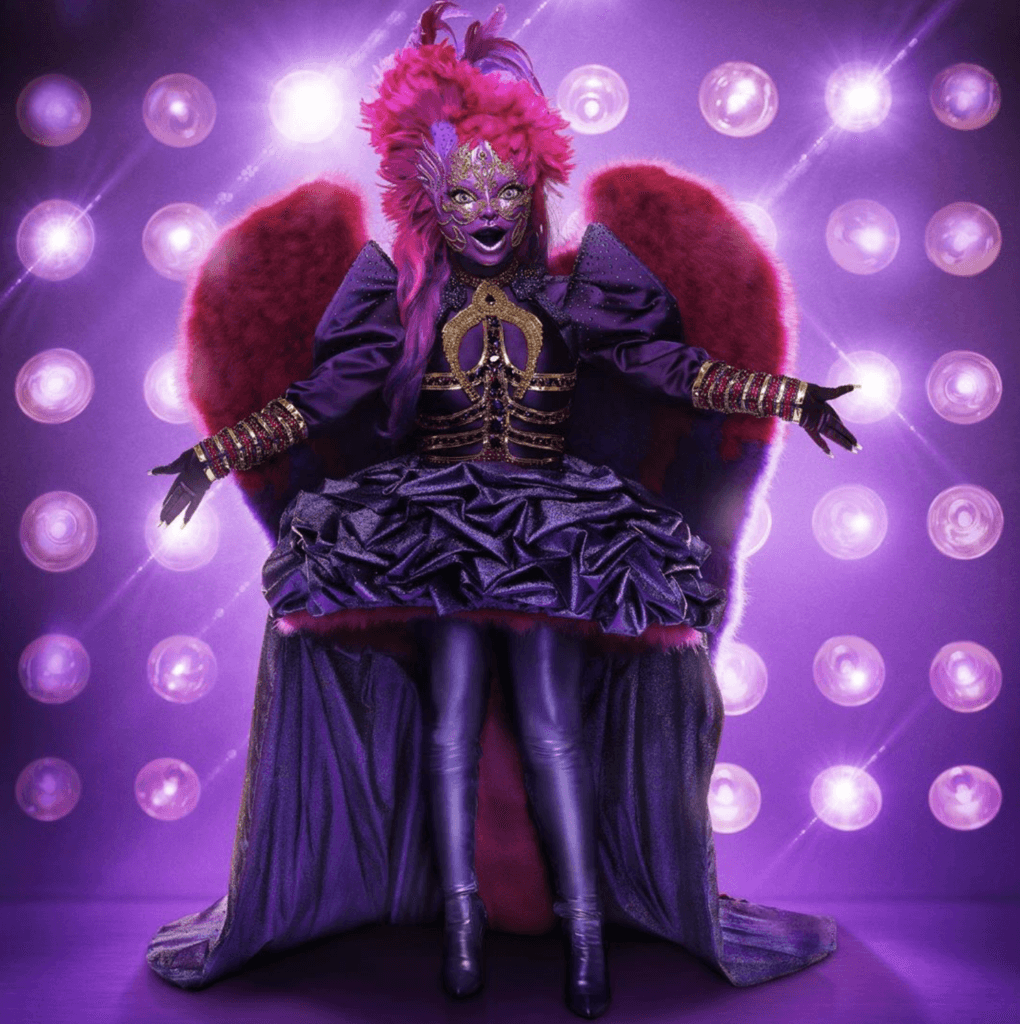 After Kandi Burruss was revealed as The Masked Singer winner — Twitter lit up with many puzzled fans questioning the Night Angel’s singing ability. 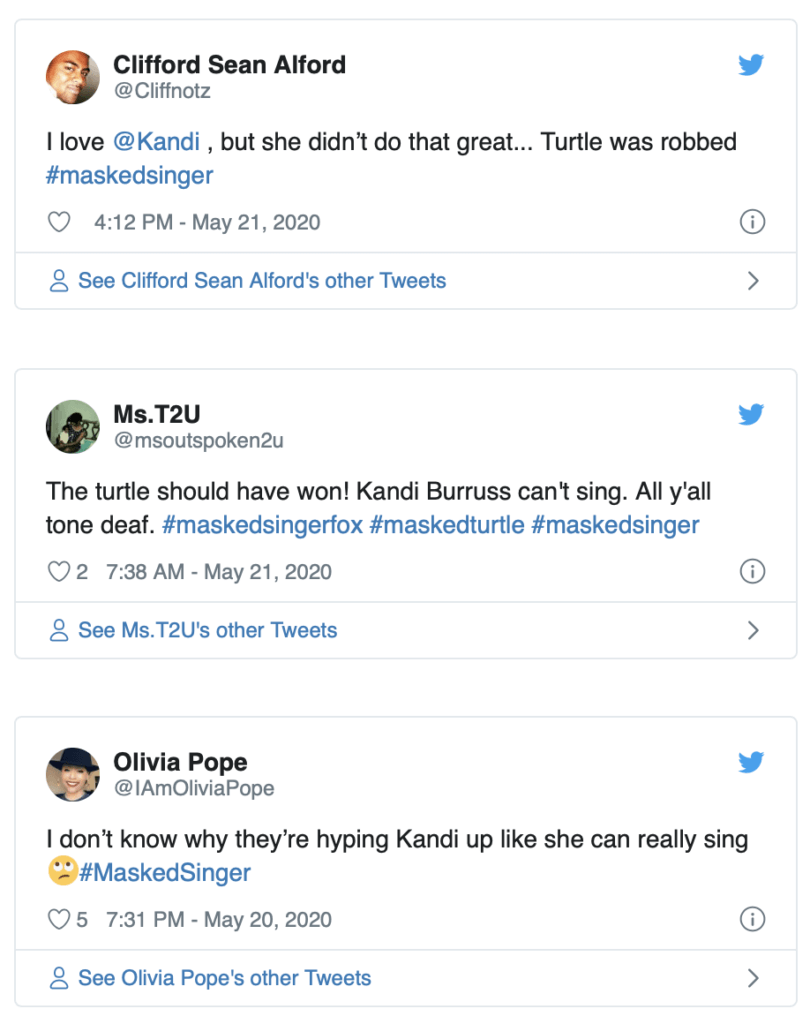 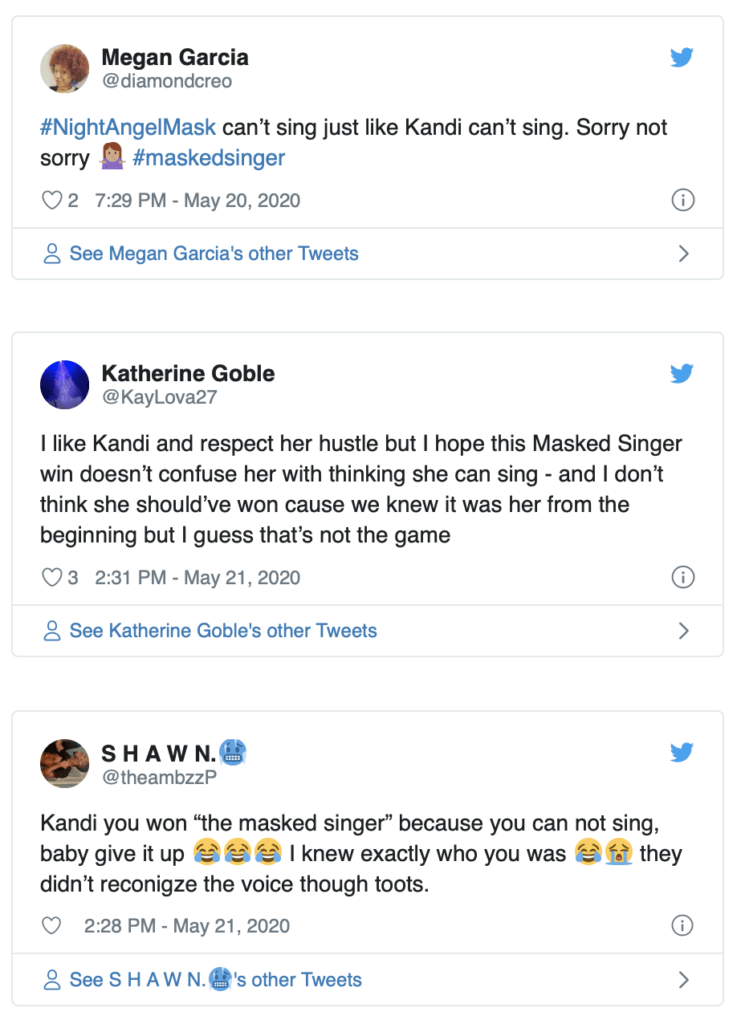 Fresh off her Masked Singer win — the Real Housewives of Atlanta star dropped a new song Wednesday night called, “Used to Love Me” on Instagram — and got dragged by her social media. Press play below to listen.

Dance like nobody’s watching! #usedtoloveme is available on all music platforms now! Add it to your playlist.

One person wrote, “She just need to give it up.. she cannot sing”

Another commented, “It’s a NO I like nene song better !!!”

Someone else noted, “She need to stick to real housewives of Atlanta right now.”

“She flopped kaboodles with this one 😩try again kandy I wouldn’t death drop to this.”

“Who approve this to come out🤦🏾‍♀️”

One fan compared the Grammy winner’s song to NeNe Leakes’ wildly popular diss track, “How Nene make a better song than her 😂.”

Fans of the Bravo show know that Kandi Burruss recently threw shade at her co-star, NeNe Leakes’ smash hit single — “Come and Get This Hunni.”

Another fan urged Kandi to leave the music to NeNe, “Leave this to Nene please😫.”

“Is it just me or is it her voice. I love her as a person but I hate her music sounds like me singing in the shower.”

“Here she go sounding like a dying billy goat😩.”

“Kandi… the music is over baby. You do TV now.”

During a recent appearance on Watch What Happens Live @Home — Kandi Burruss  commented on NeNe Leakes’ new single — “Come and Get This Hunni.”

“You’re the Grammy winner, what did you think?” Host Andy Cohen asked Kandi.

“It was cool. It was nice,” Kandi responded — but when pressed, the artist took it a step further.

“I don’t try to diss people’s music and their creativity so I was going to say it was nice, but to be honest with you, to me it’s more of like a novelty record, kind of like a Weird Al Yankovic type of thing,” Kandi commented.

“Does it have the legs that “Tardy for the Party” had?” Andy Cohen asked.

“We shall see, “ Kandi Burruss quipped.

Part 3 of The Real Housewives of Atlanta reunion airs Sunday May 24, at 8 p.m. ET, on Bravo.