Welcome back to another pasta-fueled episode of Vanderpump Rules. Well as the old saying goes, time flies when you’re having fun and by fun, I mean watching the Vanderpump kids continue to make a mess out of their lives…eight years later. It’s true. As much as things change, they really do stay the same when it comes to this cast of characters. Take tonight’s season finale episode for instance. It’s got all of the makings of every other Vanderpump Rules season finale. The photoshoot with tons of beautiful people, the dramatic moment Lisa Vanderpump and Jax Taylor go toe-to-toe (over his blatant disregard for literally anyone that is not himself), the annual party where Lisa toasts to all of the staff who keep her restaurants afloat and bank account hefty and of course, the part where a friendship or two implodes right before our very eyes. Yep, this is the token finale all right.

The episode starts off a bit weak as the producers deliver us more of the love triangle we never wanted in the first place. Once again Dayna Kathan and Brett Caprioni are engaging in another redundant conversation about how they “wanna see where this goes” which is actually code for we don’t really like each other but want to keep this going for other reasons. It’s obvious to anyone with a pulse that Dayna is most certainly acting out of spite, but Brett needs this love saga to continue to solidify his spot on the cast. Hate to break it to you poodle head, but you won’t be recast next season. You can Kim Zolciak Biermann trust, believe and receive that. Ya feel me? 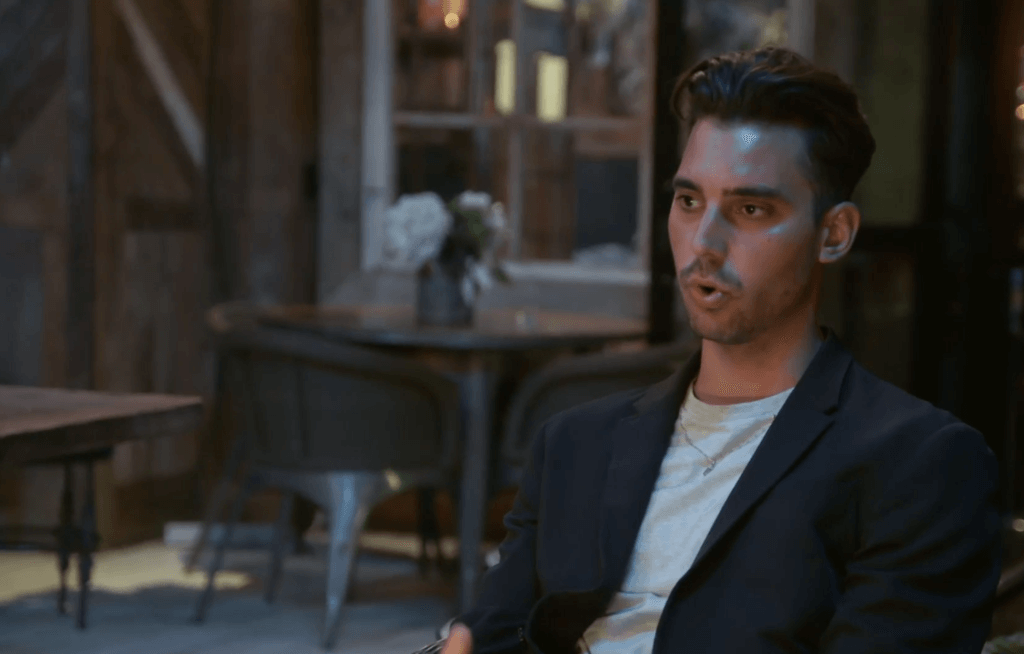 Meanwhile, Max Boyens is following Tom Schwartz around like a lost puppy, acting as his sidekick for the day. While at Villa Rosa, Max gives his sad, puppy eyes to Lisa one too many times. She finally relents and asks to know the gist of whatever is currently transpiring with the fake love trio. Like clockwork, she doles out sage advice that promptly falls on deaf ears. When will these kids ever learn?

Across town, Tom Sandoval and Ariana Madix are spending the afternoon getting spa treatments and discussing how to execute their united front against Jax woe is me Taylor. Ariana says she spoke with Brittany Cartwright via text and they seemed to have made some peace over the Valley Village Pool Party turf wars but Ariana isn’t necessarily ready to extend that same grace to Kentucky Muffin’s old man who happens to be the catalyst to all of the drama in the first place.

Stassi Schroeder, Katie Maloney-Schwartz and Brittany visit Lala Kent in the palatial pad she now shares with Randall. I have to admit though, for someone who owns a PJ, I’m not super impressed with the digs. Don’t get me wrong, the inside is beautiful, but it almost seems like they ran out of money before renovating the exterior of the house. Who knows? Maybe that’s when all the money troubles aka the 50 cent money by Monday stuff went down.

Once the foursome gets their normal Kristin bashing out of the way, Lala then asks, “are we all good?” and by we, she means Katie and Brittany who just engaged in a knockdown drag-out over the phone one day prior. Katie makes it clear that she doesn’t appreciate being called out for her rage texting while she’s trying to punish Jax for doing the same thing. “It’s not the same,” she says with so much conviction that I’m inclined to believe that she genuinely believes that to be true. 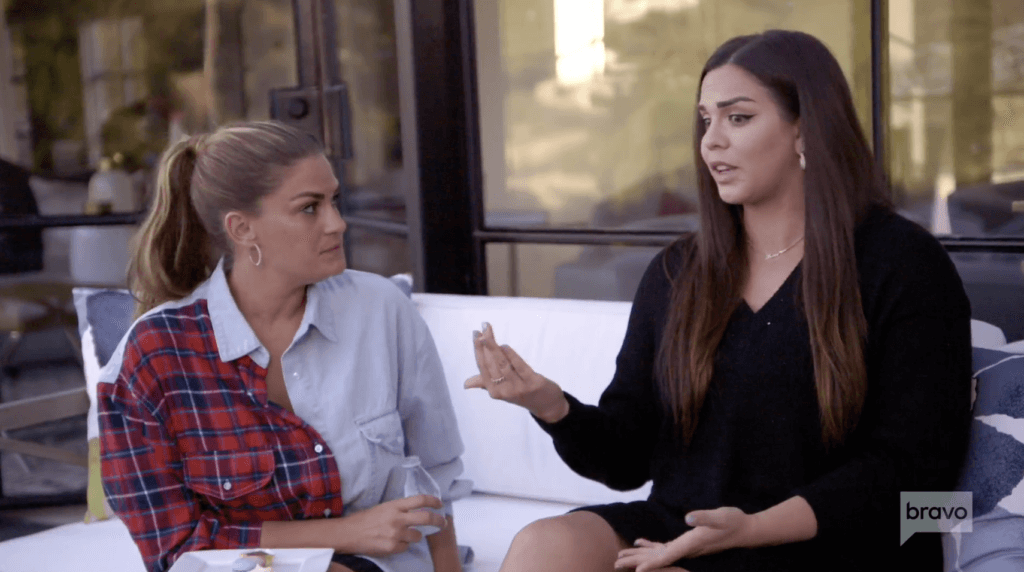 Brittany Cartwright holds firm and continues to stand by her man while she tries to explain that Jax is now a changed person who is working really hard to right all of his wrongs. When Katie threatens to block Jax, the girls all let out a collective gasp while Brittany pleads for Katie not to. “He’s really struggling right now,” Brittany says.

We’re finally treated to a rare sighting of James Kennedy’s mother, Jacqueline, though under much different circumstances than the usual. While we learn that she is now six months sober we also learn she’s recovering from a breast cancer diagnosis and a double mastectomy that quickly followed suit. Jacqueline is quick to thank her recovery for saving her life. According to Jacqueline had she not gotten sober, she would’ve never landed the job that gave her health insurance and the means to schedule a mammogram. A very emotional James breaks down at the mere mention of how things could’ve been much different had she not gotten sober.

Fresh off of their new engagement Stassi and Beau continue to tick all the boxes off their newly engaged couple’s checklist. Next up: house hunting. While on their quest to find the perfect home, they can’t help but throw some shade at their friends and fellow castmates. The first home they walk in Beau immediately points out, “this is definitely not like a McMansion they put up in a second.” Stassi shares the same sentiments adding, “I want something that has character-like Hollywood charm. I’m not gonna be the fourth person to buy a modern farmhouse in valley village.” Okay Beaussi, but I bet right now you’d give anything to be living it up in Valley Village with your besties AND your very own swimming pool.

In the meantime, a meeting is called with Ken, Lisa and the Toms to discuss their future business endeavor. The Toms hem and haw around before squealing with delight that they are in. High fives all around. I assure you this scene is just as corny as I am describing it. 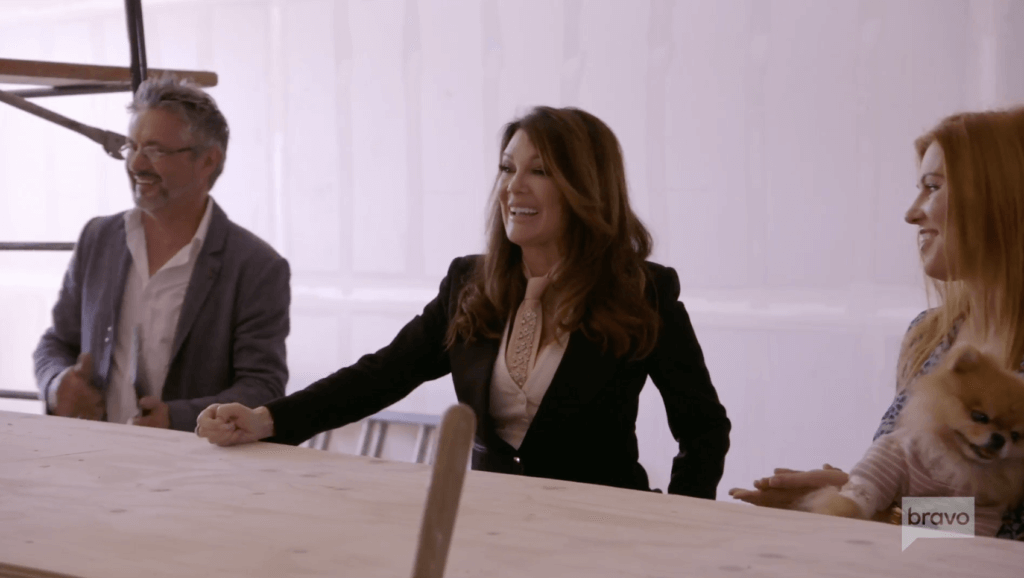 It’s finally the moment of the Hollywood Reporter photoshoot. Jax immediately gets to work making an ass out himself for the gazillionth time this season. First, he tries to convince Ariana that Brittany was the one so upset over the dueling pool parties. Then he tries to assert his dominance over the rest of the group while wearing a navy blue polo shirt in the photoshoot instead of the black button-down the rest of the bartenders are required to wear. When Lisa calls him on it and demands that he change, he whines and claims that he doesn’t even own one. “I’ll wear what I want when I want,” he huffs and puffs. 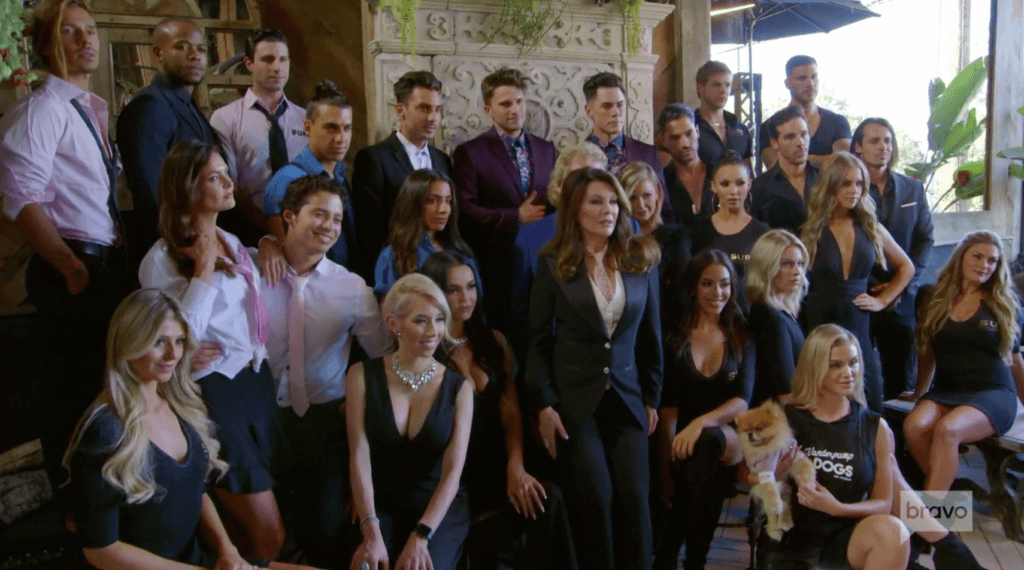 After the shoot, Lisa summons Jax outside to deliver a sermon about his piss-poor attitude… for the eighth season in a row. He launches into a pity party bigger than the pool party he attempted to throw and chalks up all the bad behavior to that “sprained brain” of his. Lisa’s not buying what Jax is selling though and demands that he step it up and fix whatever it is that’s going on in his head.

Later that evening, the TomTom anniversary party is underway when the Toms roll up on Sandoval’s motorcycle with Schwartz dutifully riding shottie in the sidecar. They jump out in matching suits and salute one another with their secret handshake before entering the party and greeting all of their guests. Anyone else having deja vu from last season? Yeah me too. 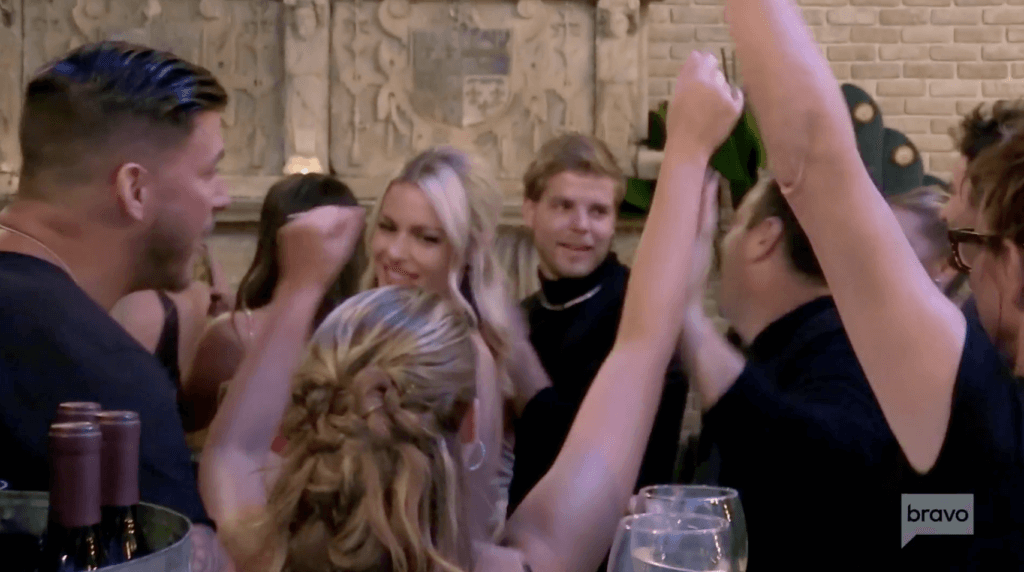 Meanwhile, Ariana Madix is inside spilling the tea about Kristen Doute and Carter being officially on again. The gossip appears to be music to Katie’s ears as she immediately rushes over to her partner in girl-on-girl crime. Stassi and Katie relish in their I-told-you-so’s but are abruptly cut short as Kristen icily breezes past them.

Later on Ariana and Stassi exchange niceties before Ariana takes Stassi to task for the comments she supposedly made about Tom and Ariana’s house. Stassi is genuinely shocked at the accusation as she screams for Scheana to come over and explain herself for starting the rumor in the first place. Meanwhile, a very sloppy Scheana Squared aka Karrah the Vanderpump Cocktail garden waitress staggers over and desperately tries to insert herself into the drama. Danica Dow takes particular offense to this because,  frankly, if any newcomer is going to insert themselves into situations they don’t belong in exchange for possible screen time IT’S GONNA BE HER DAMN IT. Things immediately get physical between the two. Meanwhile thug life Lala finally proves once and for all, she’s all bark and no bite when a drink is accidentally slung in her direction. Lauren from you Utah, please take several seats. The jig is up.

Now for the good stuff: Jax Taylor and Sandoval share a gut-wrenching conversation that eventually results in a break up of sorts. Simultaneously, two-thirds of the Witches of WeHo are outside discarding Kristen like she’s last night’s trash. Stassi ends the altercation by screaming, “the witches of WeHo are DUNZO.” Katie looks on eagerly as she basks in the warmth of Kristen’s fresh tears. Wowww. Other than date a man they don’t approve of, can someone please explain to me why they suddenly hate her so much? Is Stassi secretly not over the whole Jax thing? Did Kristen secretly screw Schwartzy too? I’m still not connecting the dots. Please someone explain this to me in a way that actually makes sense. 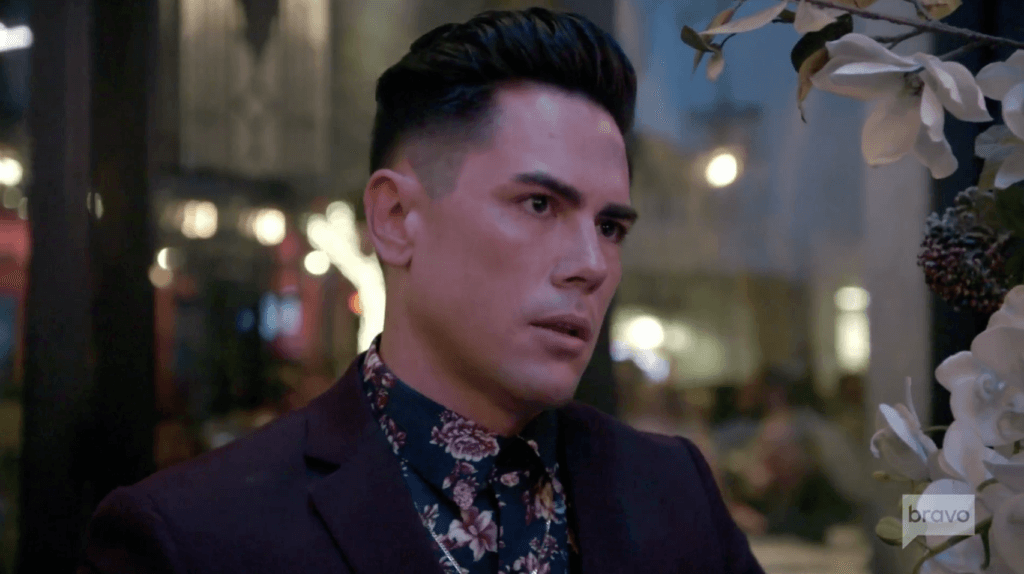 The episode further implodes when Jax Taylor appears to suffer from a sprained brain episode right before our very eyes. It’s like he almost forgets the cameras are around and who he’s talking to when he refers to the show as his show. Lisa is quick to remind him it’s HER show and that he needs to come correct when speaking to her. She then delivers the line we’ve all been waiting to hear, “Stop making yourself more special than you are.” 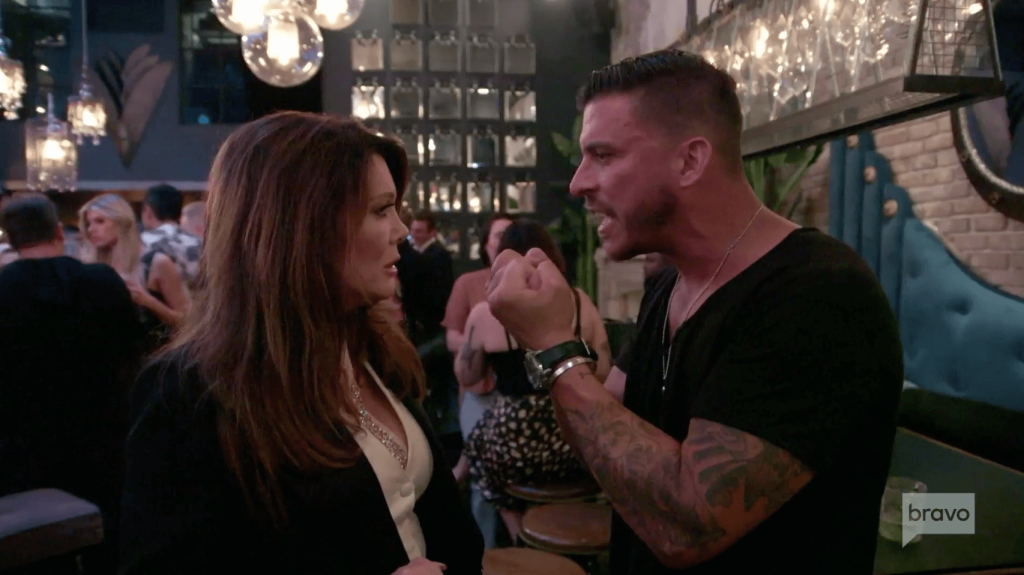 And there ya have it, folks… another season down. Will Vanderpump Rules live to see another season? Or has it simply run its course? Time will tell I suppose.