Welcome back to an all-new episode of Married to Medicine LA. This week’s episode kicks off with newbie Dr. Kendra Segura admitting to Dr. Britten Cole that she is extremely naive when it comes to newborn babies. “At work, I’m a doctor. I write the scripts. I do the procedures. At home with Hart, I’m an intern.” She later adds that motherhood is very humbling and “will bring you to your knees.” PREACH.

We also learn that Kendra and her old-school Vietnamese mother, Minh, are butting heads over her choices as a new mother. In a nutshell, her mother doesn’t support Kendra’s choice to breastfeed baby Hart because it makes things more difficult when she is caring for Hart while Kendra is working. She’s also not afraid to let Kendra know that she doesn’t respect her decision to go back to work stating, “I’m telling you Kendra if you wanna go back to work full time you have to make sure he’s stopped from breastfeeding. He has to have Similac.” 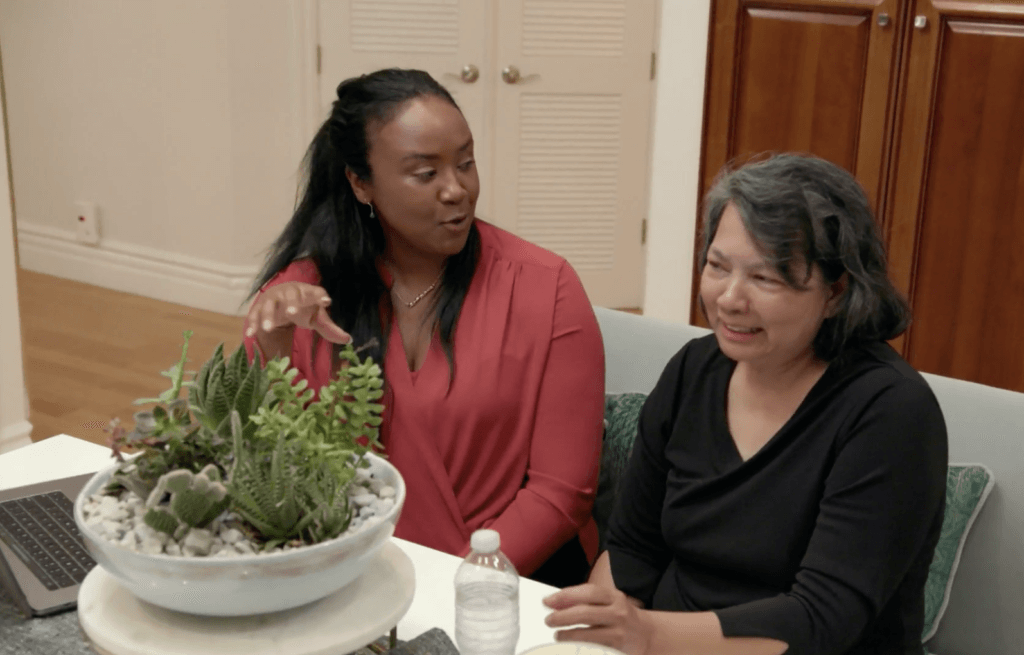 Kendra then launches into a tirade about how breastfed babies are smarter and healthier. OOF. Go ahead and prepare yourself for the backlash, Miss Kendra. Something else you’ll learn soon enough: steer clear of the two great childrearing debates- breastfeeding and vaccines. You can thank me later.

We finally get a closer glimpse at Dr. Imani Walker’s friend and newcomer to the cast, Lia Dias. Imani met Lia through Lia’s husband, who also happens to be a psychiatrist. Imani says that she loves Lia because she’s not your typical doctor’s wife. “She’s not waiting at home for her husband to come home and tell her how much money she can make,” she says. 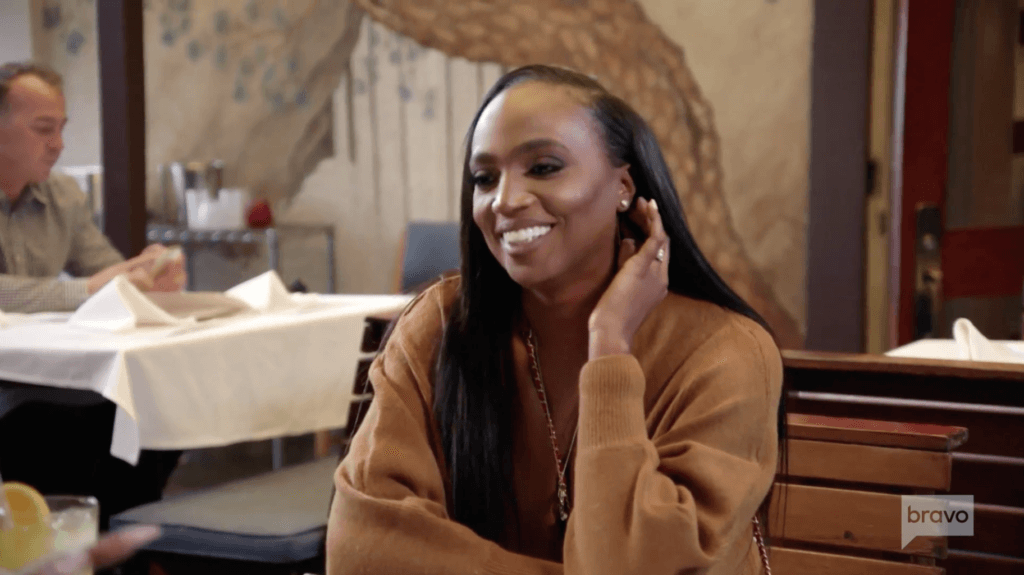 The two meet for dinner and discuss Britten’s birthday party and the drama that popped off after Imani revealed that her husband has been out of state for the past several months. When Lia asks if Imani and Jazmin Johnson are really good this time Imani admits that while Jazmin is sweet and probably means well she is indeed a messy b****. So I guess the answer to that question would be a big, fat NO. 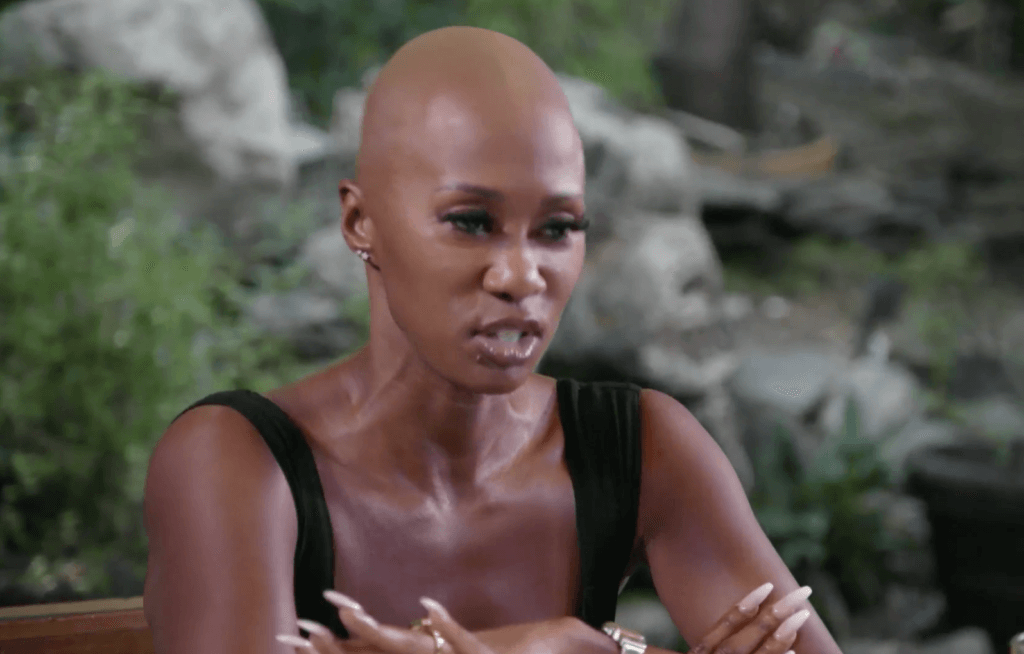 Across town, Kendra is running around putting the finishing touches on her party before the guests arrive. Meanwhile, mama Minh is berating the chef while standing over his shoulder and second-guessing every move he makes. Minh, now would be the time to socially distant yourself right on out of the kitchen.

Britten and her husband Mack arrive at Imani’s before Kendra’s party so they can all ride together. Britten wastes no time getting down to it when she asks Imani if she plans to confront Jazmin and Shanique Drummond for the not so nice things they had to say about her and Phil’s current living arrangement. “I don’t know if I’d call it confronting,” Imani says as she smiles sheepishly. That means YES. 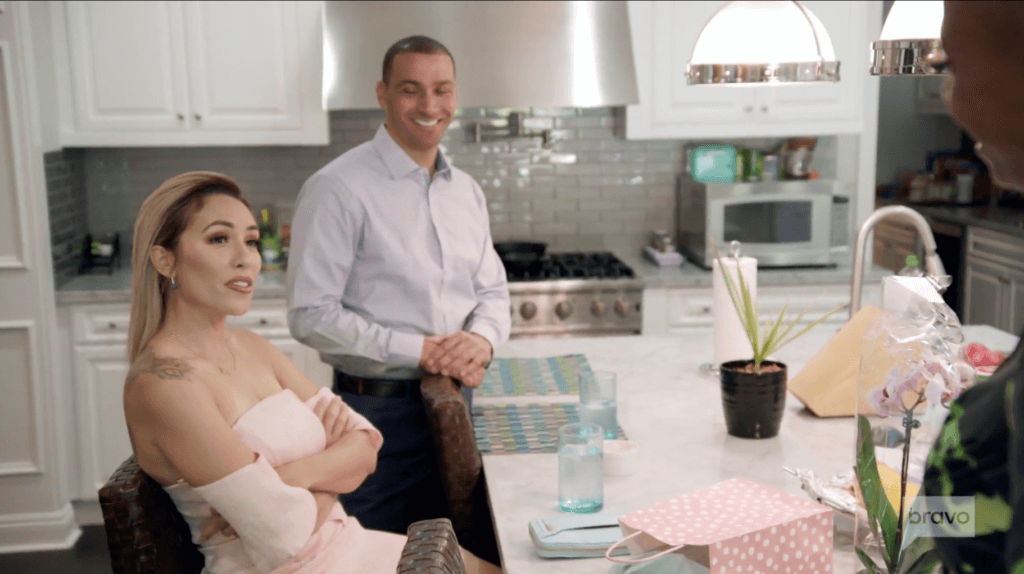 Meanwhile, Jazmin Johnson and Shanique Drummond are getting ready together while discussing Imani and her lack of willingness to reach out to Jazmin outside of the group setting. Jazmin is adamant that the apology Imani gave her must have been fake since she’s not contacted her since. 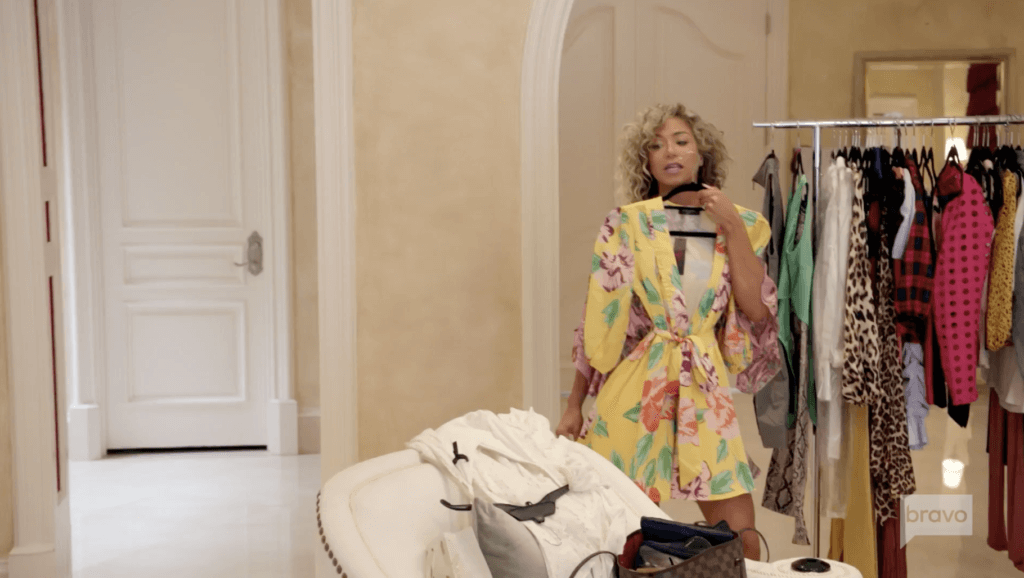 She also calls into question Imani’s secrecy regarding her husband and what he’s really doing in Oklahoma. “A friendship is built off of trust by learning about each other and being vulnerable,” Jazmin says. 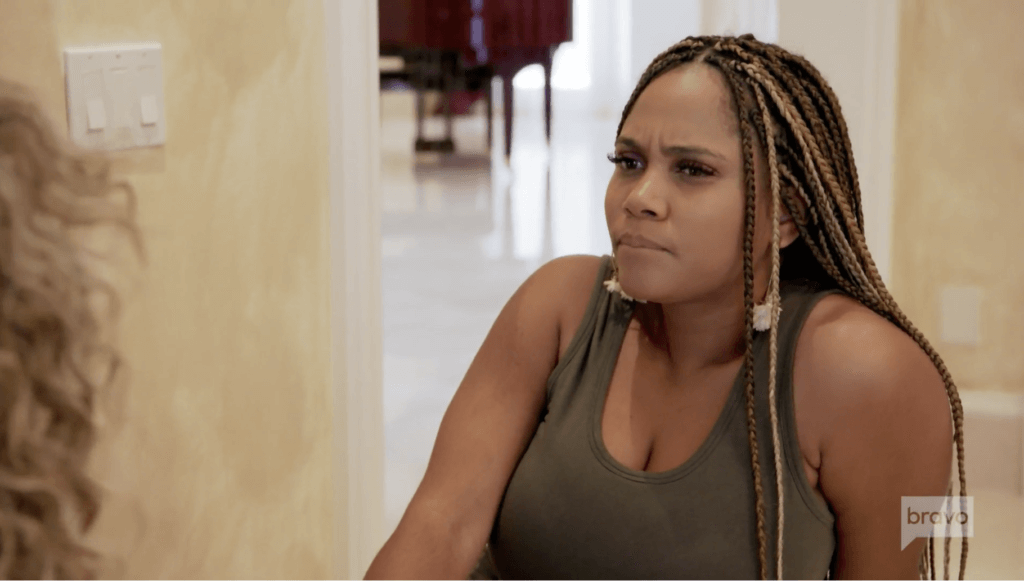 The guests start arriving at the party but are startled to find Kendra’s husband greeting them while wearing a mask. According to Hobart, he’s sick and doesn’t want to risk infecting any of the guests. Fellow physician Britten doesn’t seem to appreciate the gesture. “Hobart looks very freakishly Michael Jackson up in here. Next thing you know he’ll be grabbing little Hart and dangling him from the balcony,” she says.

OKAY. HOLD UP. Last week we were treated to a clip of one of Lisa Rinna’s daughters wearing a mask while on the set of her photoshoot for her clothing line and this week we see Hobart wearing one too. Were the residents in Los Angeles privy to information several months ago that the rest of the world was not??? Anywho-I digress…

The party splits off in two directions with Kendra, Imani, Britten and Lia outside while Jazmin and Shanique sit alone inside. Finally, Shanique summons all of the ladies inside for a “quick chat.” Once everyone is seated Jazmin launches into this long-winded speech about needing to clear the air… once again. She then accuses Imani of not being genuine when it comes to her apology and for being secretive and “ghosting” her once they supposedly made up.

Imani responds by calling out Jazmin and Shanique for their chatter about her husband being gone. She then reveals that her husband is away working at his cannabis dispensary and admits that she was being so secretive because her husband didn’t want her to say anything until the article in Essence magazine came out. “And I live in a drug dealer’s house now,” she cheekily concludes. 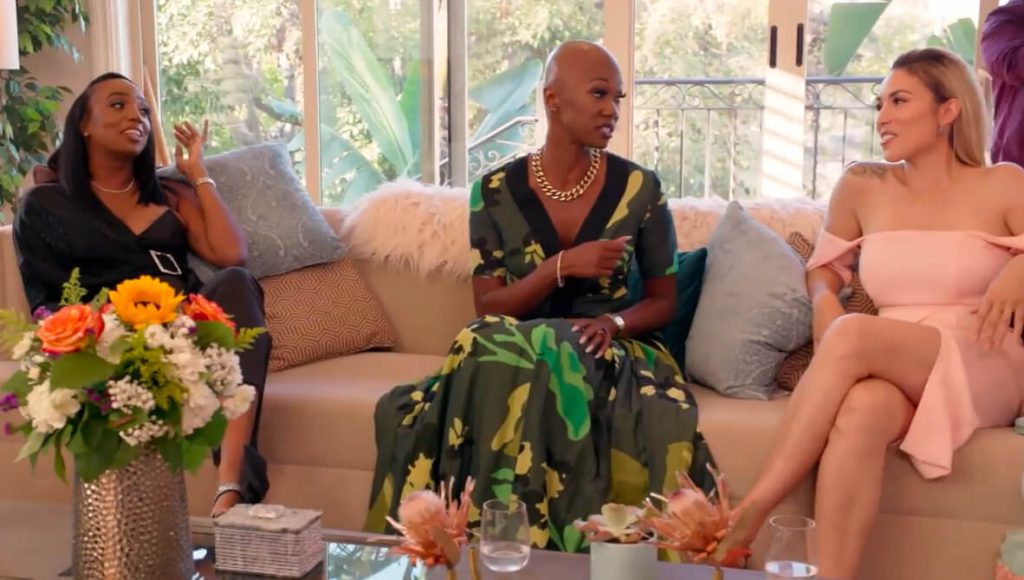 Jazmin looks genuinely confused as she stammers out, “I don’t get it.” Later in her talking head, she accuses Imani of putting her and her family through hell after referring to her home as that of a drug dealer. “The freaking hypocrisy of this,” she adds. Jazmin storms out of the room and Hobart seizes the moment to provide some half-time entertainment. He pulls a microphone out of the coffee table and immediately launches into a terrible speech thanking all of the guests for coming.

Jazmin eventually returns to the group and tries to get her point across once more but this time it’s the rookie, Lia who interrupts. “This is painful,” Lia says before adding, “you’ve been talking all day.” Shanique attempts to stick up for her friend and ask that Lia not interject but Lia quickly responds by calling Shanique “the queen of interjections” and “messy.” Shanique sees red before calling out Lia for being the messy one and announcing in front of the entire group that just a couple of months prior Lia was the one making fun of Kendra and her fashion choices. As one can imagine, Kendra doesn’t take the news well and points out that the “airforce one jumpsuit” was the only thing that would fit her postpartum body. YIKES.

Will Kendra be able to recover from Lia’s shady comments or is another beef brewing? Tune into Married to Medicine LA next week to find out.