Welcome back to the Real Housewives of New York City. We open this episode with Dorinda Medley, Luann de Lesseps, and Leah McSweeney meeting up at an outdoor walking trail. Ramona Singer and Sonja Morgan meet in the park.

Meanwhile, Tinsley Mortimer heads back to the boxing gym. Martin is ready to train her, and at least this time she’s not crying. They discuss her dating life, or lack of one. Tinsley shares her problems with Dorinda. Martin demands details, then makes her take out her frustrations in the ring. Martin is impervious to Tinsley’s puny punches and chases her around the ring until she climbs out in defeat.

We see a flashback from last week, where Dorinda Medley wanted to meet up with Tinsley for lunch and take Leah along as a buffer. Tinsley wanted to keep it between herself and Dorinda, with no intermediaries. Now, Dorinda says she’s done with Tinsley. She’s tried — God knows she’s tried to understand Tins, but she’s over it. Leah explains that Tinsley puts up a wall. And why keep talking about Tinsley if Dorinda doesn’t care about the friendship? 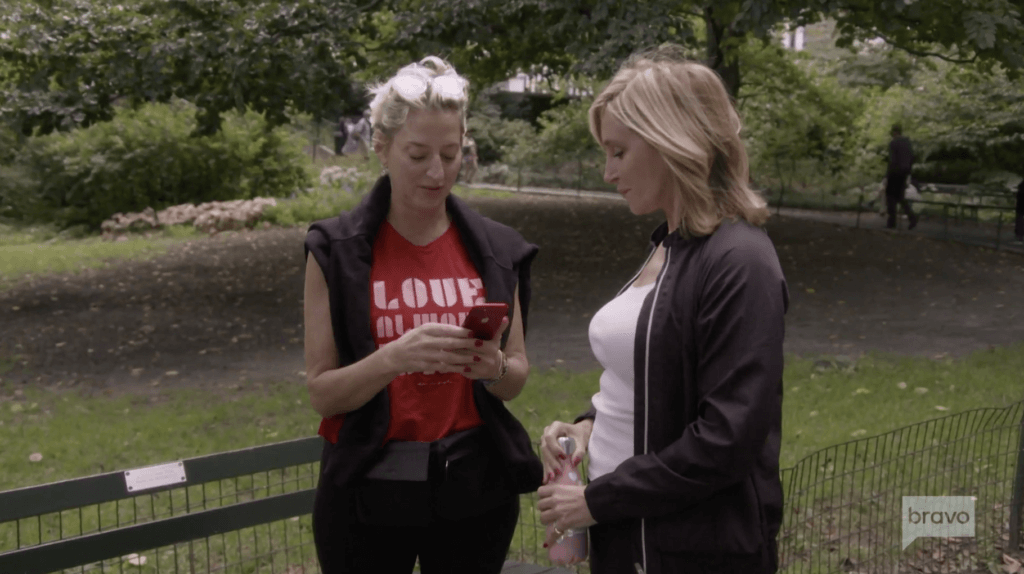 Luann de Lesseps thinks Dorinda Medley needs to understand that Tins is from the south, has an overbearing mother, and take her at face value. Even Ramona thinks Dorinda goes in too hard on Tinsley. Furthermore, Ramona thinks Dorinda might be a little jealous that Tinsley is taken care of, not only by her mom, but by possessing a trust fund. No one is taking care of Dorinda. She’s on her own.

Ramona Singer doesn’t think Dorinda’s problem lies with Tinsley, but with John. He isn’t half the man Richard was. And Dorinda must miss her lavish lifestyle terribly. Plus, Richard was a Harvard graduate and very smart. John is…none of those things.

Back at the gym, Martin is playing the role of life coach. He tells Tinsley that she’s a legend, and she needs to live her best life now. Except that he calls her Tinsdale. Whoops!

Later at Leah’s apartment, Luann stops by with lunch because Leah’s feeling under the weather. Luann checks out Leah’s place. Though she tells Leah it’s a fabulous apartment, in reality, she’s not impressed. Lu struggles not to say something insulting. She finally sputters, “I love how humble she is.” Ouch! 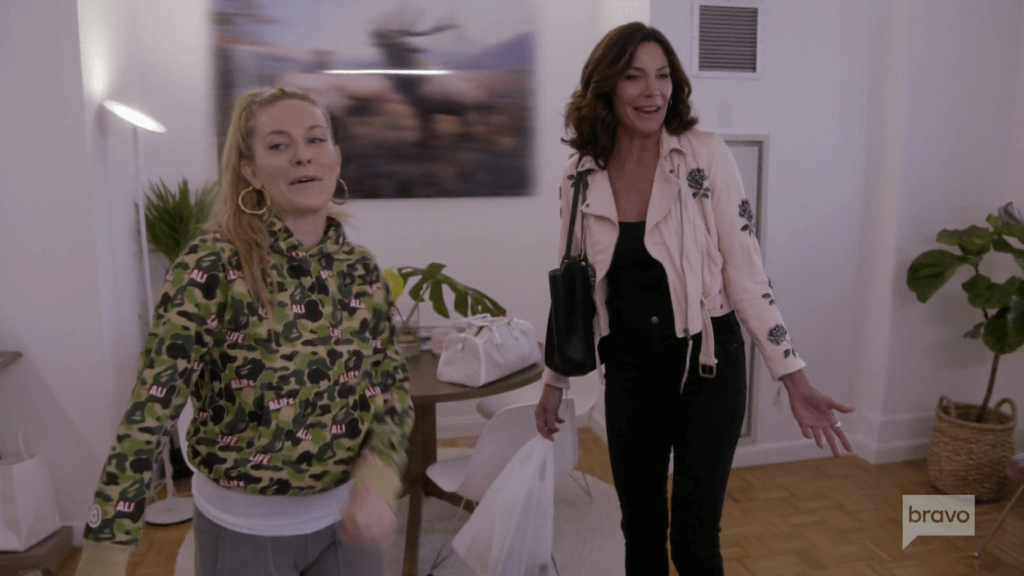 Leah McSweeney thinks most people are impressed with her apartment. Unless they’re in the one percent. Is Luann in that category? I don’t think so.

Luann de Lesseps talks about taking her first drink at the comedy club last week. She’s not following the program and says the only time she had a problem with alcohol in the past was on the cast trip to Mexico when she fell into the bushes. Is she conveniently forgetting stumbling into a hotel room that was not her own, resisting arrest, and then threatening a police officer? She wasn’t sober when that happened.

Leah can relate to Luann. She can be on the wagon or not — it’s her choice. The booze isn’t going to kill her. No matter what those pesky twelve steps say. Luann is only listening to herself, not the experts. If she wants a glass of wine, damn it, she’s going to indulge. She lives moment by moment. And if that moment includes a vodka soda, so be it.

The women discuss Page Six, which features Dorinda and her recent breakup with John. Dorinda is reading the article on her phone when she meets up with Sonja in the park. Who could have leaked the story? Ramona? Or did Dorinda do it herself? Whatever, she and John still love each other, but she needs some space.

Luann de Lesseps believes Dorinda has outgrown John. He was there when she lost Richard and helped her through the tough grieving process. But she’s moved on from that place. Should she feel guilty for wanting more? The other ladies weigh in and aren’t surprised by the news. But Tinsley points out how hypocritical it is to hear about the breakup from Page Six and not from Dorinda’s own mouth. Touché, Tinsdale!

Dorinda Medley’s finally ready to take care of herself. She doesn’t want to worry if John is out and getting other phone numbers. She needs to put herself first for a change.

Luann wants to do something nice for Dorinda. Maybe the ladies should all go to an apple orchard and winery to get some clean, fresh air.

So a few days later, they all climb into a luxury van and head to the country. There will be a hayride and wine tasting. And since no one here is on the wagon any longer, it’s game on! But Sonja swears she’s not interested in getting soused. She just wants some wholesome apple cider. 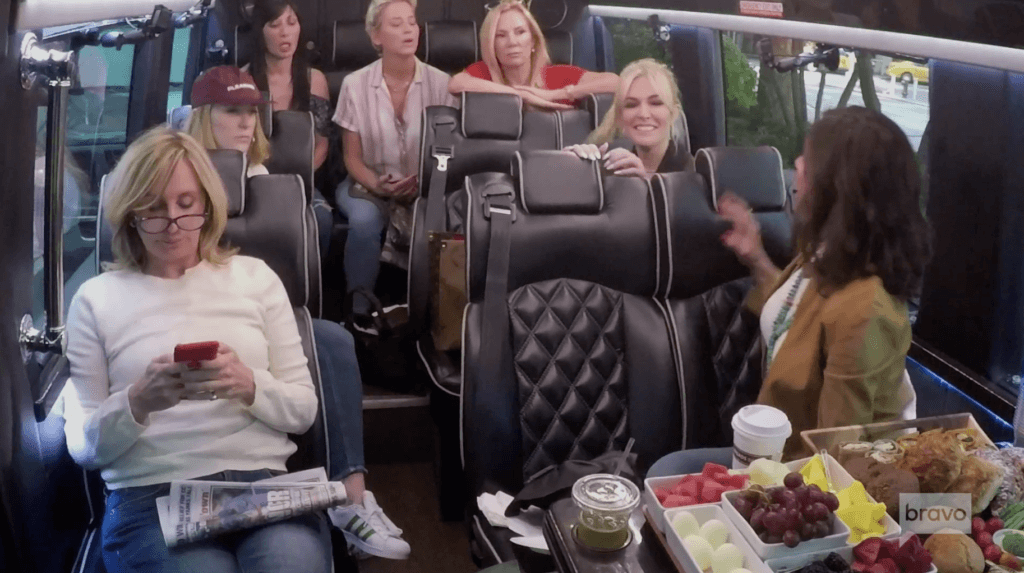 At the orchard, they all head inside to hit the wine. With glasses in hand, they go see the petting zoo. Dorinda finds a novelty wine glass big enough to swim in and says they should all stick to just one glass. Oh, how the ladies laugh.

As soon as they tuck into lunch, Sonja’s resolve to remain sober disappears. As they eat, Elyse asks Dorinda about John. Dorinda explains she isn’t the same person she was seven years ago, when they hooked up. She’s mourning Richard for the first time. She’s making a decision to be alone, and she’s okay with it. (Her behavior later says otherwise.) She’s opening herself up to the women, and confesses how hard it is.

Tinsley Mortimer butts in and says, yes, sharing is hard because people like to judge you. But Dorinda doesn’t take kindly to being called a hypocrite. She states her gum lasts longer than Tinsley’s relationships. Tinsley is confused by the reference, and then Dorinda basically calls Tins dumb. She doesn’t care about Tins, doesn’t want to know her, doesn’t care if she’s a part of her life or friend circle. She calls Tinsley invisible.

Ramona Singer wonders why Dorinda is so angry and using Tinsley as a punching bag. Elyse calls for peace and asks the two women to say something nice about the other. Dorinda says Tinsley needs a nap. Ramona’s just glad Dorinda isn’t lashing out at her.

Dorinda Medley keeps making fun of Tinsley, mocking her openly. Leah thinks women should be building each other up. Tinsley calls Dorinda a bully. Dorinda sarcastically apologizes. This is getting ugly, kids. 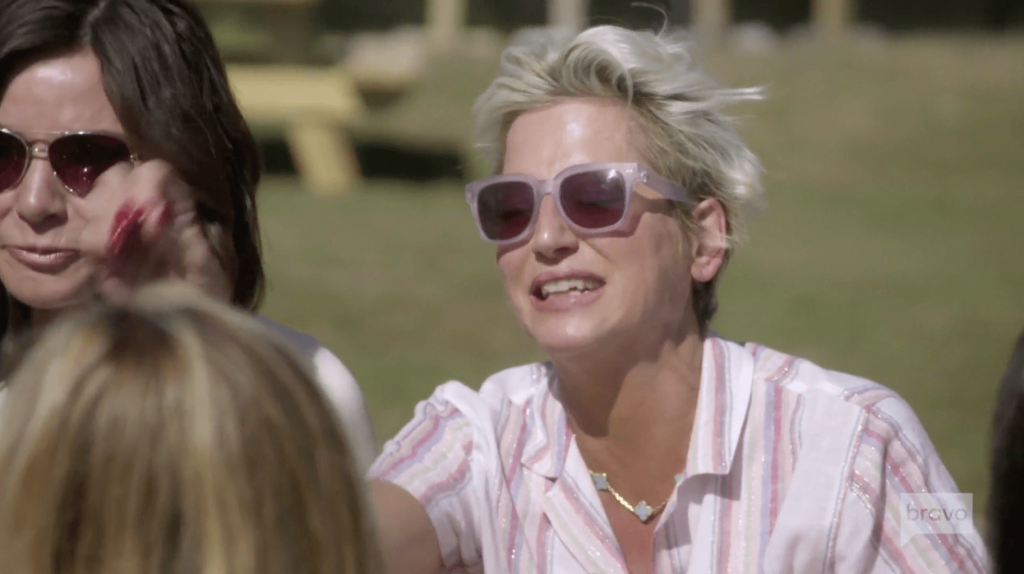 Sonja tells Tinsley to butt out of Dorinda’s life. And Ramona is putting her hands all over Tins, trying to get her to calm down. She claims she can’t even understand what the younger woman is saying, because she’s screeching in a high-pitched voice.

Upset, Tinsley runs off crying. Luann follows and tries to comfort her. She tells her to suck it up and stop crying or she’ll look weak. As Luann keeps lecturing her on how to act, Tinsley yells at Luan to shut it and listen for a change. 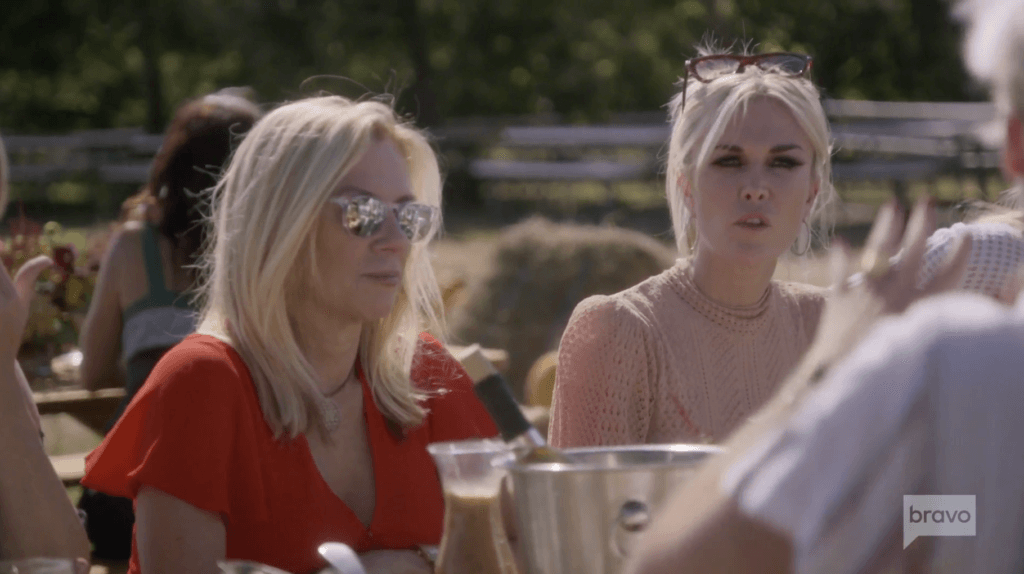 Meanwhile back at the lunch table, Dorinda tells Elyse to stop analyzing her. She says she’s not mean or unkind. But Elyse says she’s frightened of Dorinda and her anger.

Dorinda complains that Tinsley should have shown some compassion toward her breakup. Why did she have to trigger Dorinda, knowing how angry she’d get? Dorinda, that’s what abusers say. “If you hadn’t made me angry, I wouldn’t have hurt you.” Take responsibility for your actions, lady!

Leah understands Tinsley’s pain. She’s forty-four, no husband, no kids. But Dorinda has zero sympathy. Her husband died, and she wanted to be buried with him. That’s pain! Now, Dorinda starts crying, too. Leah rounds the table and soothes her.

Dorinda says that she’s going to be fifty-five soon. She’s been a good person, a good mother, and her life is miserable. It’s not fair, damn it! When Richard died, she drank too much, starting with wine at breakfast and continuing to hit the bottle throughout the day. But she reined herself in. See? That’s what pain looks like!

Leah sees both sides. Dorinda might be miserable, but why does she have to be a bitch to Tinsley?

Tinsley comes back to the table with a glass of wine, complaining out loud to herself. Leah commiserates with Tinsley and makes her climb a tree. Because nature, right? Fortunately, Tinsley has changed from her high heeled boots into tennis shoes as she shimmies up the short apple tree. It doesn’t help. She’s upset that she let herself be fragile and allowed Dorinda to wind her up.

Afterward, the women go for a hayride, and Sonja Morgan is shit faced. The tractor putts along, and Lu announces they’re going into the corn maze. The ladies aren’t enthusiastic, but stick with the program. 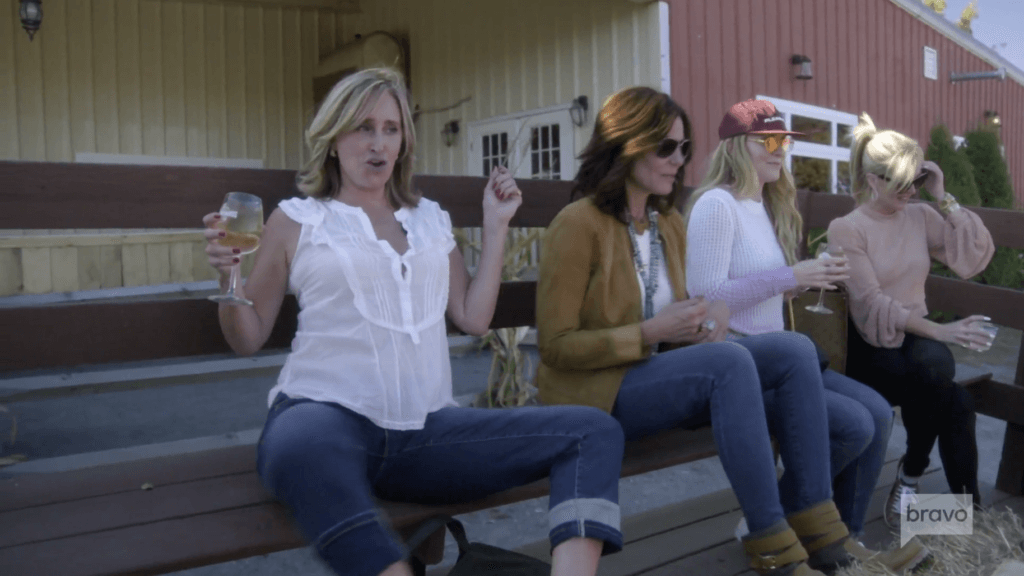 Sonja is hitting on the owner of Weed Orchards. She wants to know how much he’s worth and how many acres he owns. He suddenly finds the corn maze very interesting and practically runs from her.

Elyse and Ramona go through the maze with Dorinda, but they keep hitting dead ends. A drunk Sonja starts steeling ears of corn to take home. Free food from farm to table! Both groups get lost.

Tinsley screams as loud as she can when Leah and Sonja squat in the corn field to pee. Sonja wipes with a corn husk, but Tinsley saves the day and offers a tissue, which is much gentler on delicate lady bits. 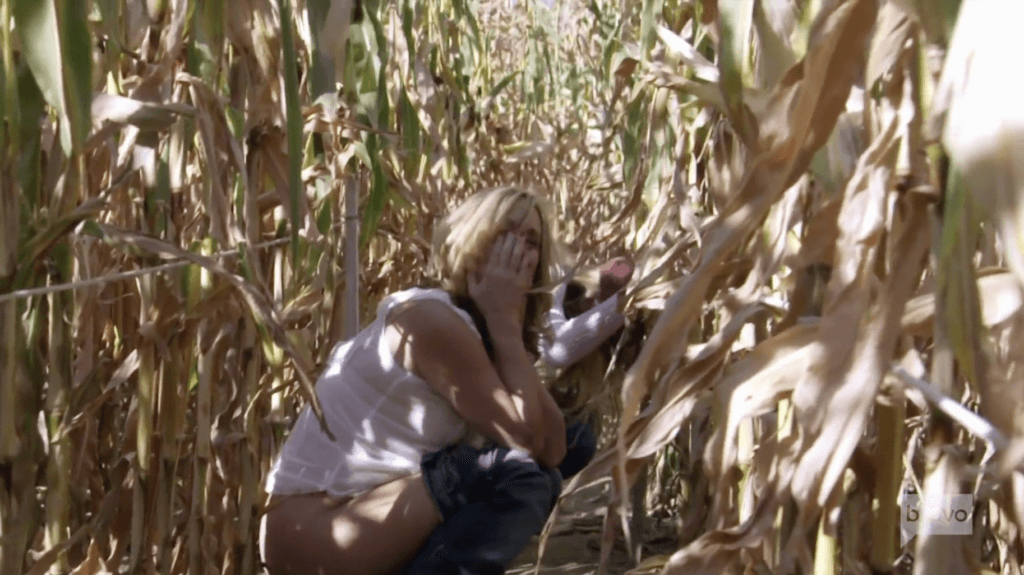 As Leah watches Sonja’s crazy antics, she decides she likes drunk Sonja a lot better than sober Sonja who lectured about the evils of tattoos a few weeks ago.

Dorinda cheats and takes her team to the middle of the field. But Lu and her crew are already back at the hayride. Lu wins!

Everyone gathers on the tractor to return to the wine bar. During the short ride, Ramona and Dorinda have a heart to heart. Ramona says she and Mario were growing apart, he felt inadequate, and that’s why he cheated. It’s okay to move on without a man. Everyone else shuffles inside, but Ramona and Dorinda stay. Dorinda starts crying, saying she hopes John walks away better for having met her. 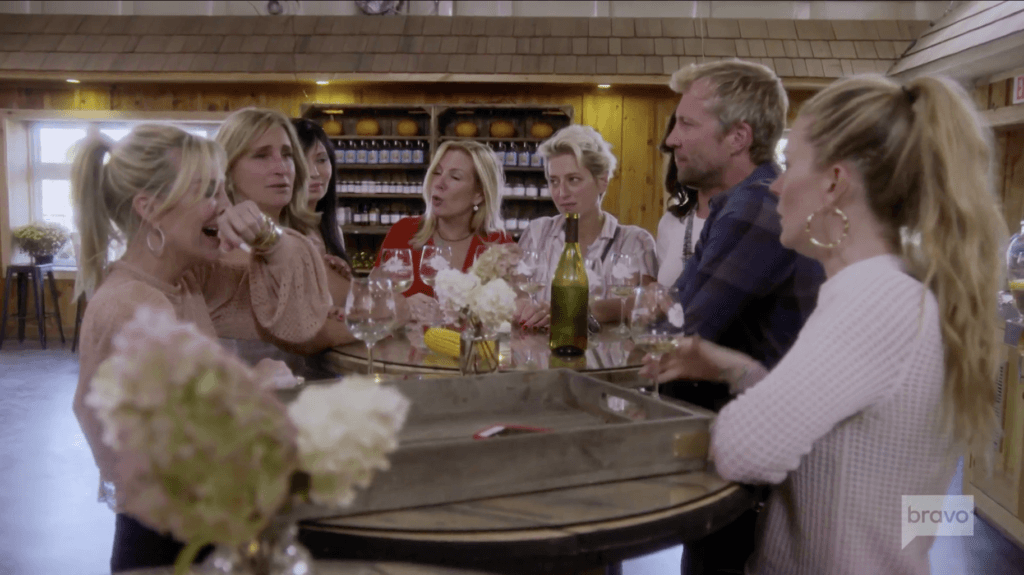 Inside at the wine tasting, Sonja drunkenly proclaims that cheese makes your p*ssy wetter. Tinsley is grossed out (as am I). Luann remarks that when Sonja drinks, she becomes a caricature of herself. Then Sonja claims she’d use Riesling as a lubricant and announces she got pounded hard the night before. 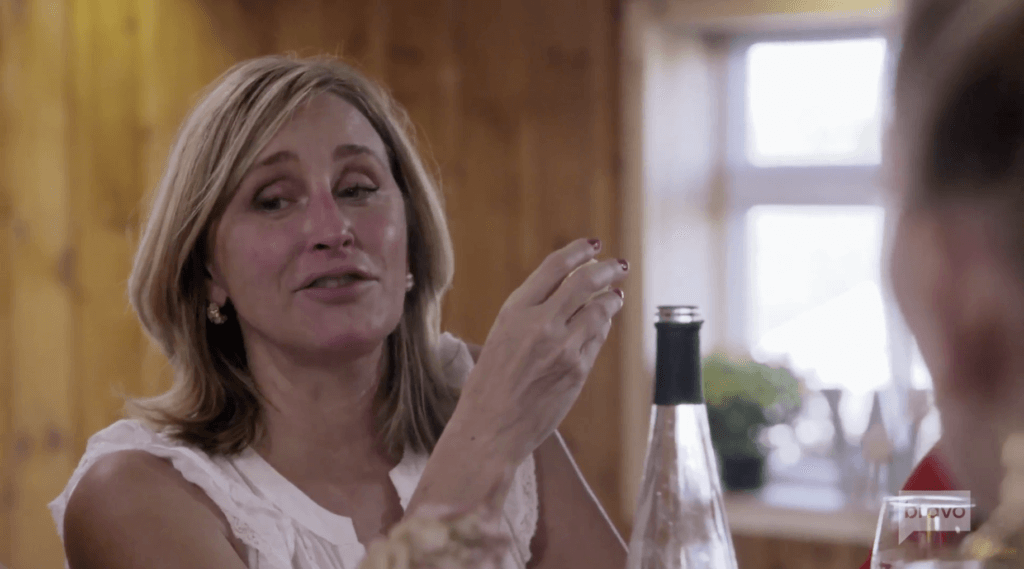 The sommelier chats with Luann and calls Sonja a hot mess. He doesn’t think the male anatomy is much to look at. Lu disagrees and talk soon turns to dick pics.

Leah says she likes dick pics. She wants to see the merch before fucking it. No micro penises need apply. Sonja thinks small dicks should be banned. Tinsley says size doesn’t matter, it’s a man’s character (or wallet) that counts. Sonja accuses Tinsley of putting up with anything if she gets a piece of jewelry out of it. 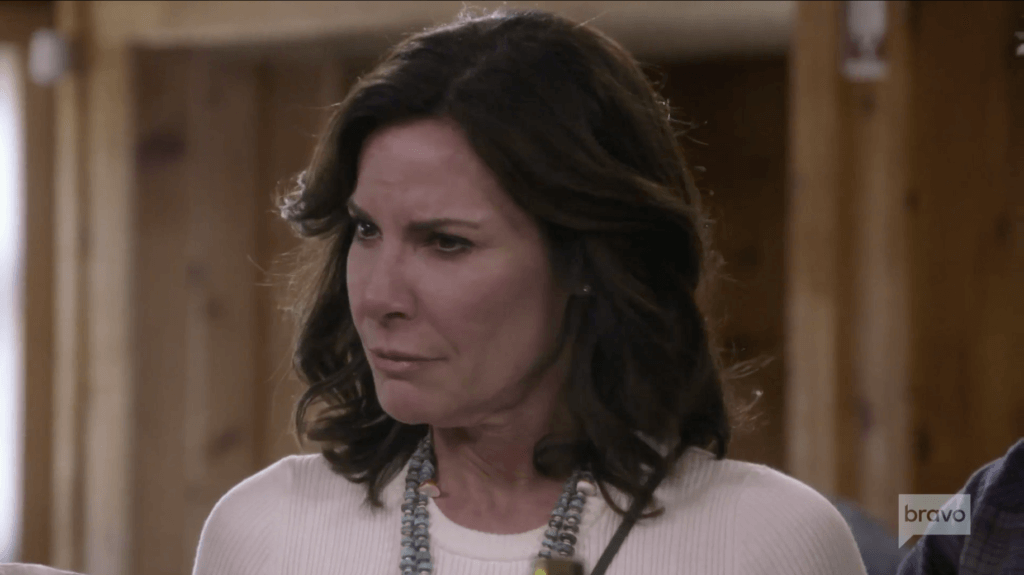 And that ends our episode. So, was Dorinda out of order for blasting Tinsley? Was Tinsley to blame for Dorinda’s blowup? And should Lu and Leah be drinking at all?