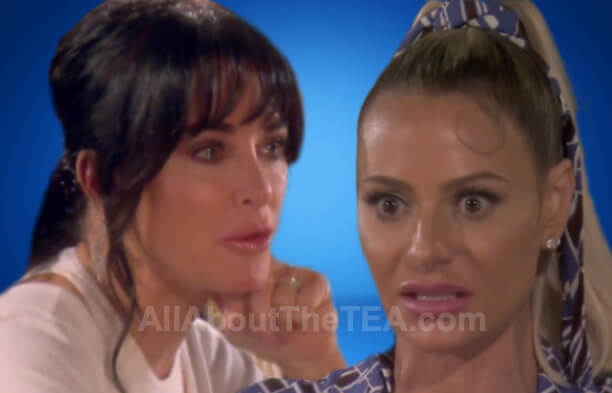 Welcome back to an all-new episode of Real Housewives of Beverly Hills — Mean Girls edition with Kyle Richards starring as Regina George. Let’s get started!

Tonight’s episode opens with Kyle Richards, Erika Girardi and Sutton Stracke finally en route to the infamous All In retreat we’ve heard so much about for the past three episodes. While in the car the ladies commiserate about having to wake up so early to get to the retreat on time. Erika points out that they better all get major friendship points.

Sutton Stracke tells Kyle and Erika that she texted Teddi Mellencamp Arroyave and apologized for her behavior at the dinner party. She says she plans to be on her best behavior at Teddi’s retreat. “I’m gonna be a very good girl,” says Sutton.

Meanwhile, Type A Teddi is running around like a chicken with her head cut off making sure everything is just right for the retreat. “I want it to be perfect so every detail is timed out.” Teddi’s planned boxing, a healthy lunch, free time and mindful meditation. One thing she is adamant she did not make time for on the itinerary: her friend’s petty bulls***. These ladies better come correct.

Kyle Richards, Erika and Sutton finally arrive and right before getting out of the car Sutton has a meltdown with real tears and everything. She says she feels awkward about attending Teddi’s retreat so soon after their drama. Kyle and Erika try their best to console her. Luckily, Kyle is no stranger to awkward run ins with people she’s just engaged in World War III with -ahem, Camille Grammer. Teddi admits in her talking head that she’s not entirely keen on the idea of Sutton coming to the retreat but once Sutton walks in it’s all fake smiles and hugs from Teddi. Now this would be the perfect time for Lisa Rinna to pop out of a bush screaming “OWN IT.” Am I right?! 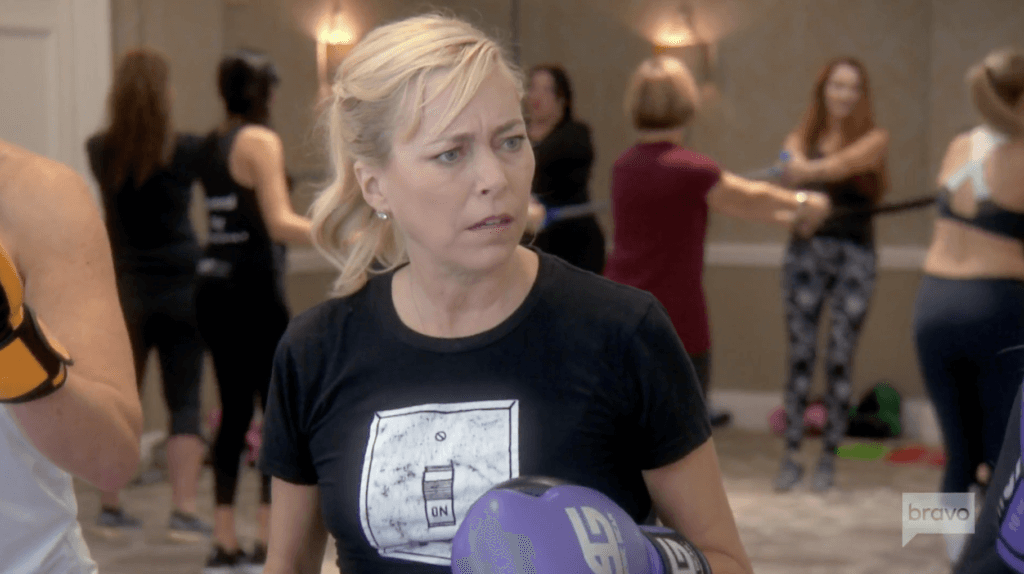 Teddi Mellencamp wastes no time getting started and the retreat is off to a running start when the ladies all participate in a boxing class. Poor Sutton, a self-proclaimed “weakling”, couldn’t look more out of place as she complains about how hot the boxing gloves are while landing zero punches.

Dorit Kemsley finally breezes in during lunch sporting a high pony-tail, a Balenciaga jacket and camo leggings. Once she arrives to the table Kyle immediately gets to work questioning her on her whereabouts and why she was late. Later in her talking head Kyle throws major shade at Dorit accusing her of being late to Teddi’s retreat because of glam. Teddi, however, is adamant that she is unbothered by Dorit’s tardiness as she’s come to expect that of her. 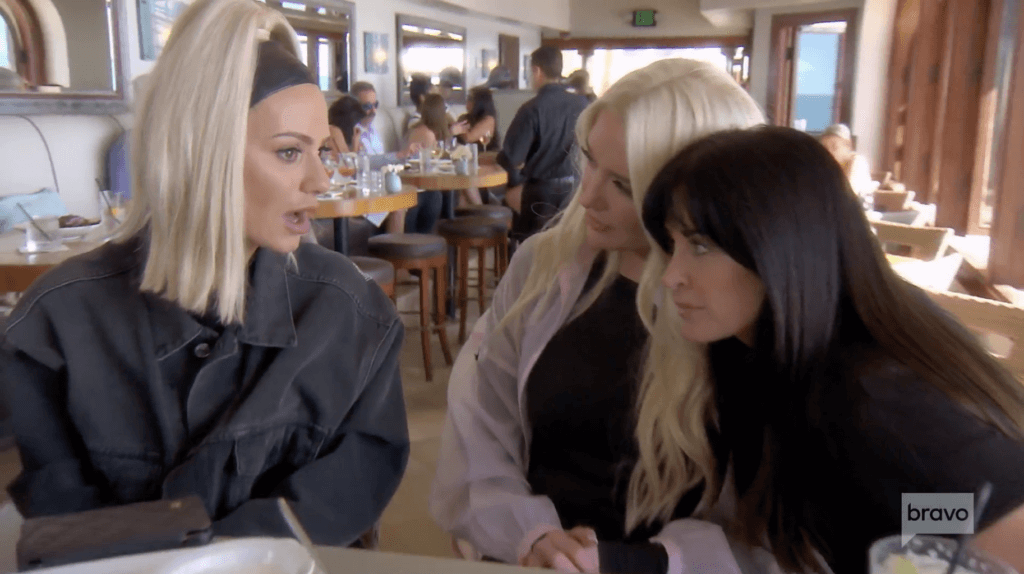 Back in the room at the resort, tensions build as Kyle and Dorit have a pissing match over who gave up more to be at the retreat. For the second time in this episode we hear Kyle mention that she woke up at 5 am to get there on time. Dorit quips back that she was up at 4 am. “For what???,” Kyle asks her. “I have a f****** life, Kyle,” Dorit screams back. Kyle takes that as an insinuation from Dorit that she doesn’t have a life. Cue the long-winded speech by Kyle about her clothing line, filming in North Carolina, etc. that we’ve already heard several times over. 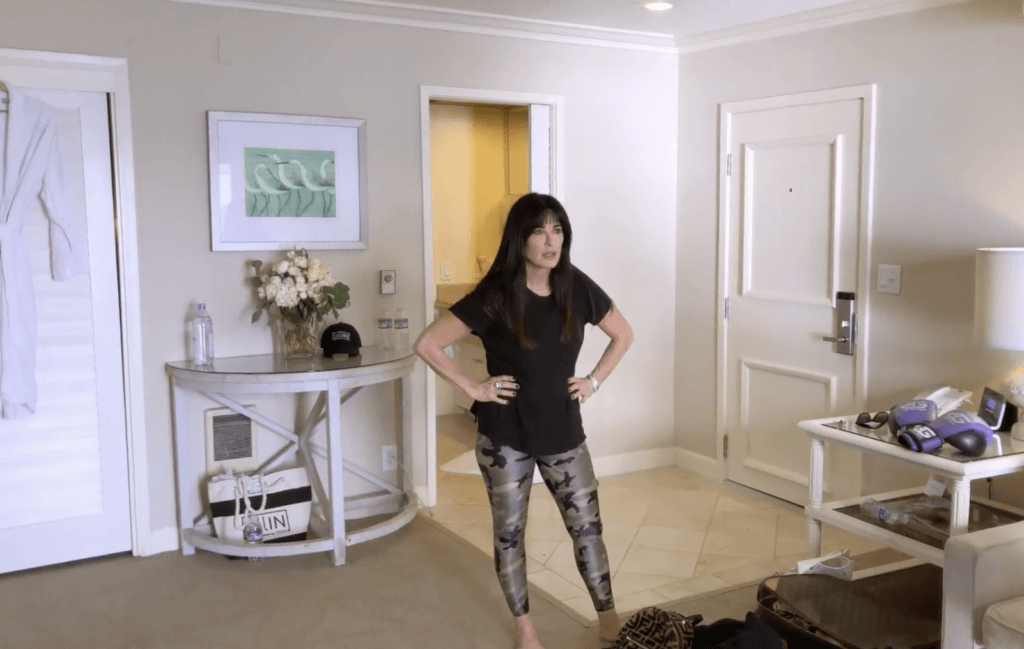 Erika plays referee and makes a very valid point when she asks, “Why don’t we just admit that nobody wants to be here?” Thank you Erika, for being the voice of reason during this very dumb fight. 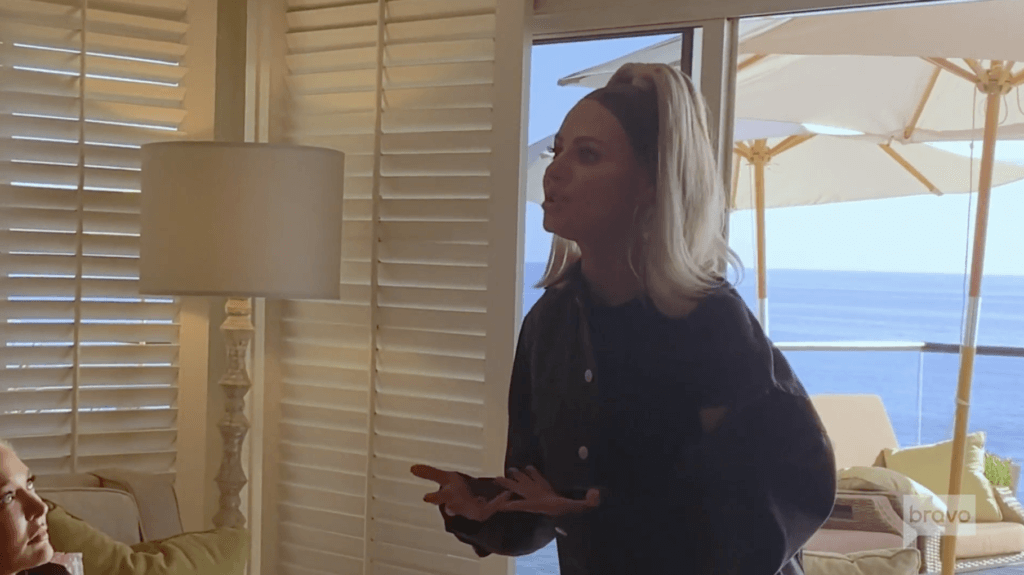 Later that evening the ladies meet for the retreat dinner and Denise Richards comes hobbling in. She unknowingly opens pandora’s box when she asks the ladies if they had a good time. Cue the awkward looks before Kyle and Dorit launch into another round of dumbest argument ever. Kyle accuses Dorit of being late to Teddi’s retreat strictly because of glam. Dorit denies it and accuses Kyle of trying to make her look bad. Ugh. I’m pretty sure that each time I type the word “glam” I lose a few brain cells.

Back in Beverly Hills, Lisa Rinna and her daughter Amelia are celebrating her return from NYC. The plan is that Amelia will transfer to USC to finish college. Lisa makes a joke about putting Amelia on a rowing machine and taking a few pics to get her in. Too soon? Probably. 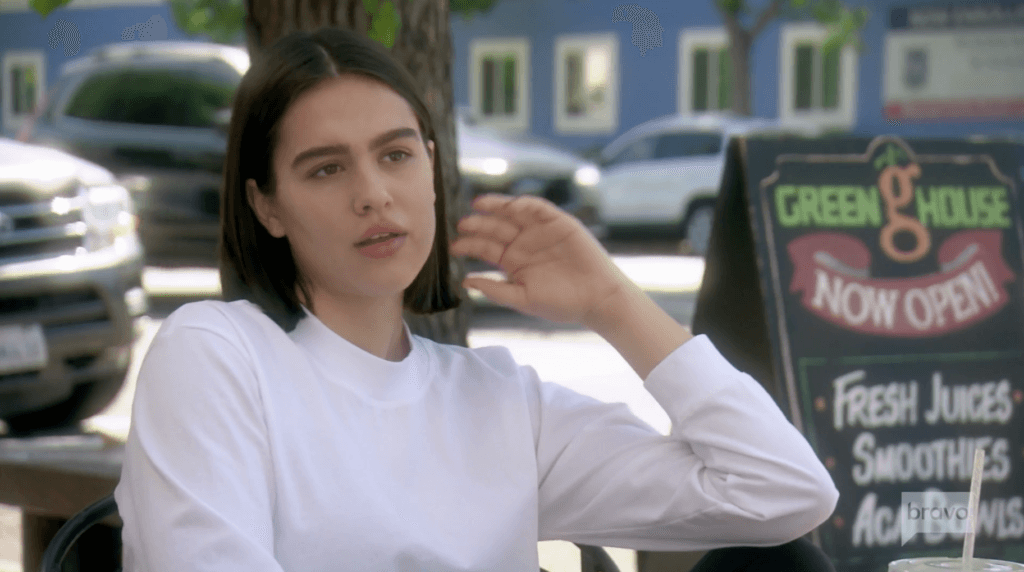 We finally get a closer glimpse of Garcelle Beauvais as a mother when she takes her boys out for pizza. It’s obvious to everyone that although she’s a doting, loving mother, Garcelle doesn’t play. “I’m okay with being strict,” she says. When one of the boys casually mentions he wants Gucci she is quick to remind him that he will need to get a job and pay for it himself. “You’re not getting Gucci anything. That’s obnoxious,” she adds. 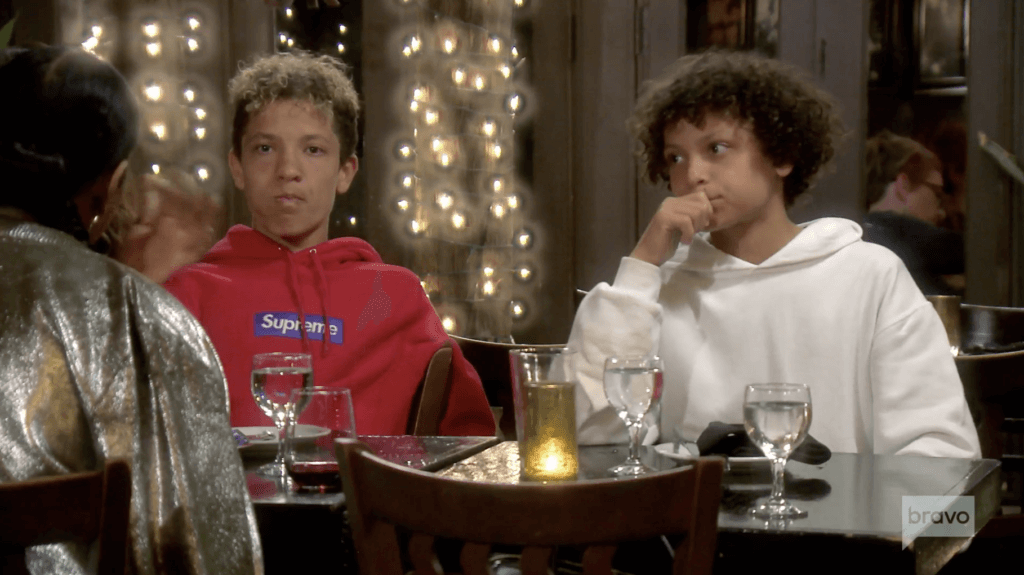 The next day Kyle Richards  is getting ready for Denise and Aaron’s backyard pizza party as she gives Mauricio the rundown on her new drama with Dorit. We learn that a couple of days prior Dorit made a backhanded comment about Kyle and Teddi always choosing to sleep in the same bed with one another. Kyle thinks Dorit’s just jealous of their friendship.

It appears Kyle Richards is on a role with the passive aggressive mean girl attitude because a few moments later she greets Dorit and can’t help but point out the strategically placed baby hairs curled and slicked down to Dorit’s hairline. “Oh you have a little… oh is that supposed to be like that?” she asks. Later as she and Garcelle are chatting she takes it upon herself to re-enact Dorit’s photoshoot in full glam with poses and everything. With friends like Kyle who needs enemies? 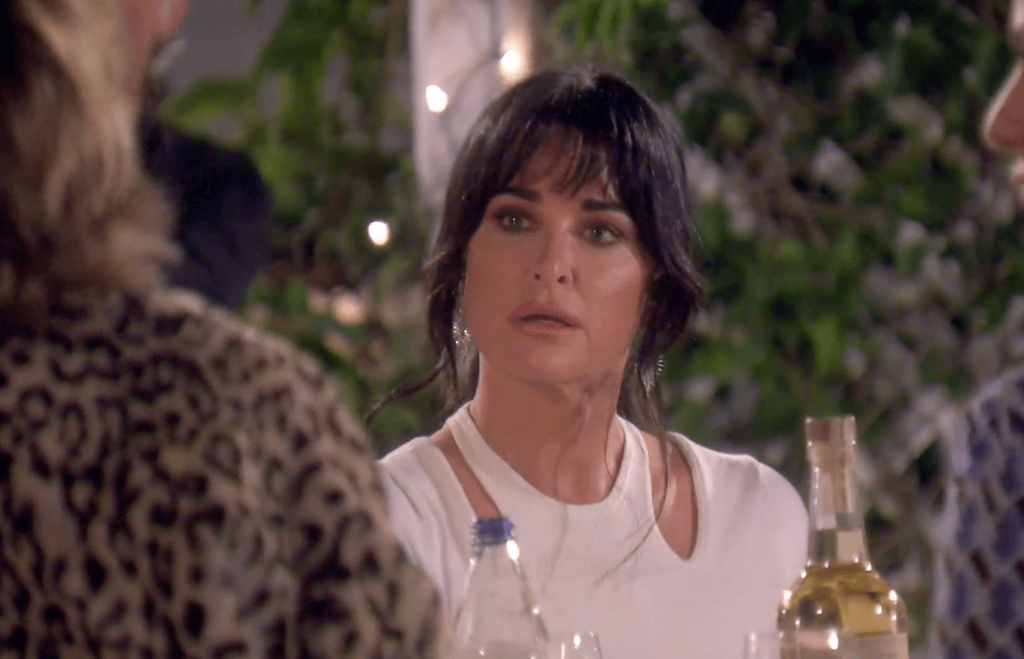 Once everyone sits down to eat their woodfired pizza straight from the outdoor ovens the drama between Kyle and Dorit rears it’s ugly head yet again. Kyle loses her mind when Lisa carefully reminds her that she hasn’t always sided with her girlfriends. Case in point: the drama between Lisa and Kyle’s sister Kim Richards. 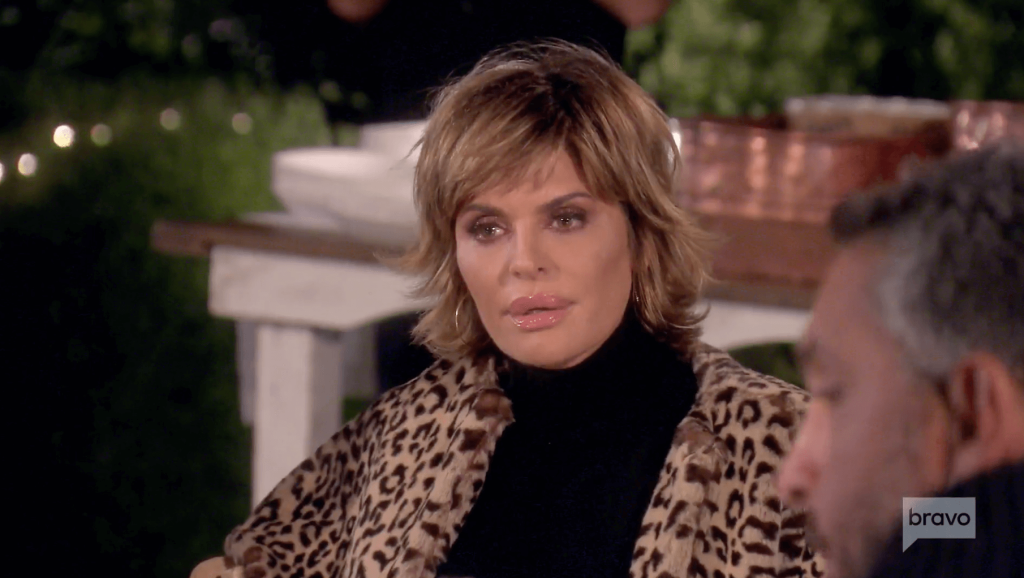 Kyle Richards sees red at the mere mention of her sister. In one fell swoop, Kyle manages to call Dorit out for her “fake Barbie glam” while also telling Lisa to “fuck off” and demanding that Denise keep quiet and stay out of it… at her own home. Then we hear her take it a step further when she refers to Denise as a “ragamuffin” and makes fun of her for never wearing “anything but a fucking moptop ponytail.” Okay Regina George, you can go take several seats… by yourself. Because no one wants to sit with you anymore. 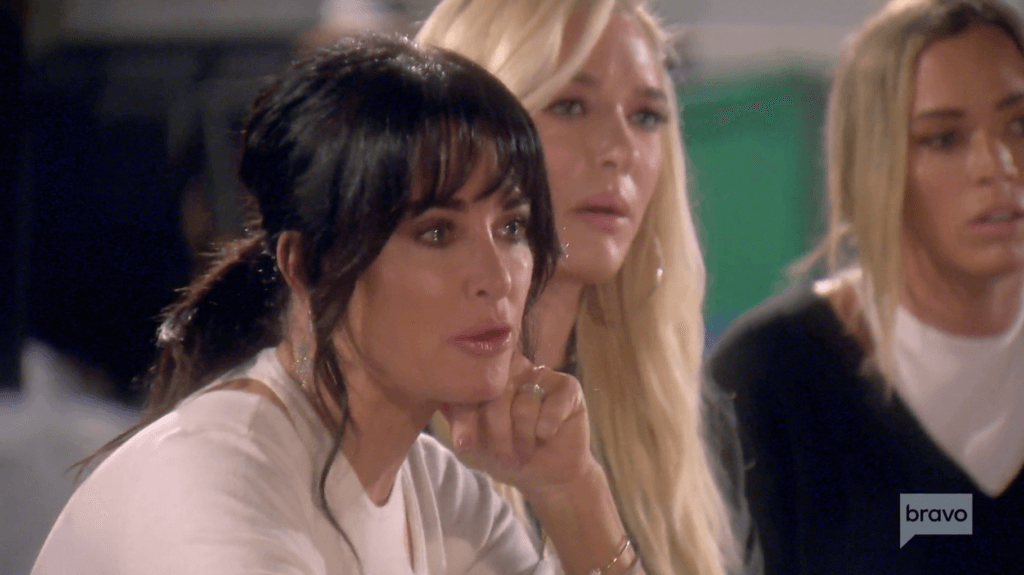 Will the ladies allow Kyle Richards to get away with her mean girl behavior?Tune in next week to find out!