We begin our episode of Shahs of Sunset with Mercedes “MJ” Javid  having lunch with her husband, Tommy, her mom, Vida, and baby Shams. MJ wants to host a sip and see so she can show off the baby. But of course she needs a theme. She’s thinking of an outdoor fair at the Houdini mansion. 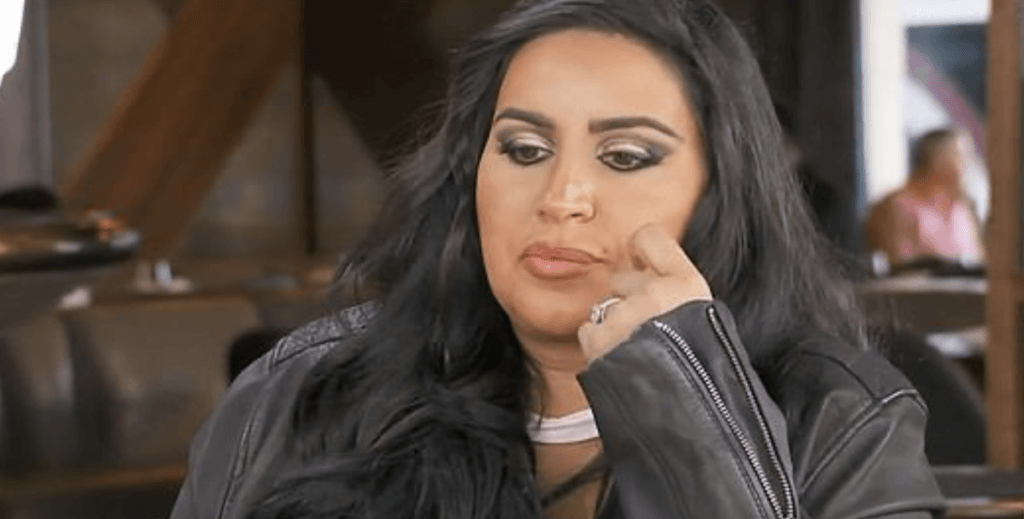 Mercedes “MJ” Javid shares the good news that she’s spoken to Reza Farahan, and he’s agreed to drop all the charges against Tommy. That doesn’t mean she’s inviting Reza to her sip and see. There’s that pesky restraining order to think about. Until Reza drops it officially, he can’t come.

Reza Farahan and Adam have a day date. They’re at a clay studio, making bowls and talking about Reza’s vacay with the crew in Hawaii. Too bad Adam couldn’t go. He’d have loved to have seen the apiary.

Reza Farahan thinks they should drop the criminal charges against Tommy. He is a new dad, after all. Adam agrees. Reluctantly. But he still wants that restraining order to stay in place. This puts Reza in a tough spot, because he’s already promised MJ he’d drop it. Whoops! 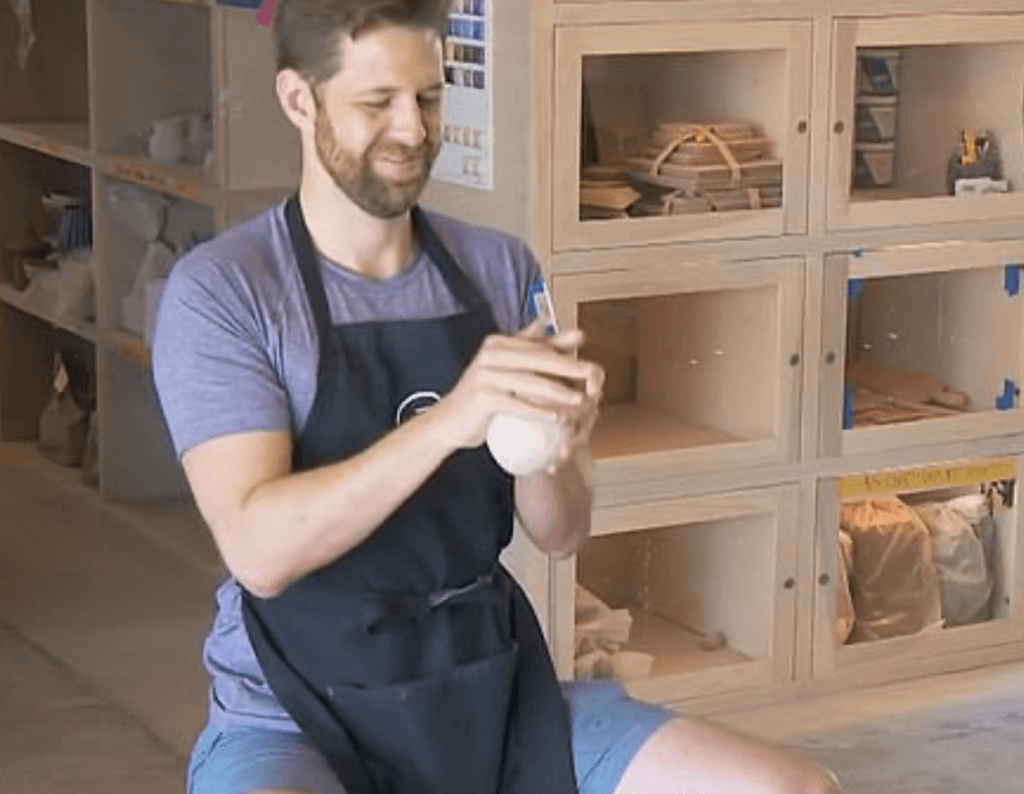 Destiney Rose takes her fur baby, Frank Sinatra, to shop for MJ’s baby. She’s looking for a good Persian gift. She winds up with boob cream instead.

At the store, Destiney calls Mike Shouhed. He’s not going to the sip and see. He’s still angry that MJ called him a strict boyfriend. MJ finds Persian men too controlling.

At Mercedes “MJ” Javid’s, she’s getting ready for the party. Her assistant has everything under control. Her hair and makeup team are ready to primp. Then she gets a spray tan — while she’s wearing her sip and see outfit. Huh?!

Nema Vand and his sister, Mona, arrive at the Houdini mansion. Shervin Roohparvar is on hand, and Sara Jeihooni also joins the party. They decorate onesies to celebrate the baby. Shervin is upset when he finds out Mike isn’t coming. Golnesa “GG” Gharachedaghi isn’t coming either. This is the first baby in the group, and MJ’s friends are turning their backs on her.

Meanwhile, Mike and Reza go to a batting cage, and GG’s getting her teeth cleaned. Nema agrees with Shervin, that the group should put aside their differences and attend. Destiney finally shows up with a zillion balloons and ridiculously high heels. It takes her a few days to climb the flight of stairs and make it into the venue.

The DJ makes an announcement when MJ, Tommy, and Shams arrive. That baby is straight up adorable, especially in his little suspenders.

Destiney Rose finally makes it up the steps and tells the boys Mike is angry. He’s feeling disrespected. MJ interrupts and says she’s not surprised that GG is a no show. But it hurts her when she learns Mike didn’t come. They’ve been friends for years, and he can’t bother to show up for her kid?

Nema Vand’s still complaining that he’ll never have kids because his parents fucked him up. He’s leaving the kids to Mona. Sara says he should break the cycle. Easier said than done, Sara. Jeez! He admits he’s living in fear. Mona says he doesn’t want to get past the…well, past.

Sara Jeihooni lost her dad in a freak car accident. At least Nema still has his parents, and they love him. She tells him to be grateful for what he has. Nema complains that everyone likes to chime in on his predicament, but what Sara has shared with him hits close to home.

Tommy gives a loudmouth, drunken toast to MJ. She thanks everyone and reads a little note to Shams. It was sweet.

Over at GG’s house, her mom stops by for a visit. She’s brought stew, veggies, and fruit for GG. And while Fatima might be GG’s best friend, she also drives her daughter crazy. Fatima can’t drive well and she has too many plastic bags. Plastic bags, people!

GG begins IVF treatments in a few weeks. She’s emotional about starting the process all over again. And then there are the needles. They hurt! But she and her mom agree that she’ll be a good mother, because Fatima was a great teacher. 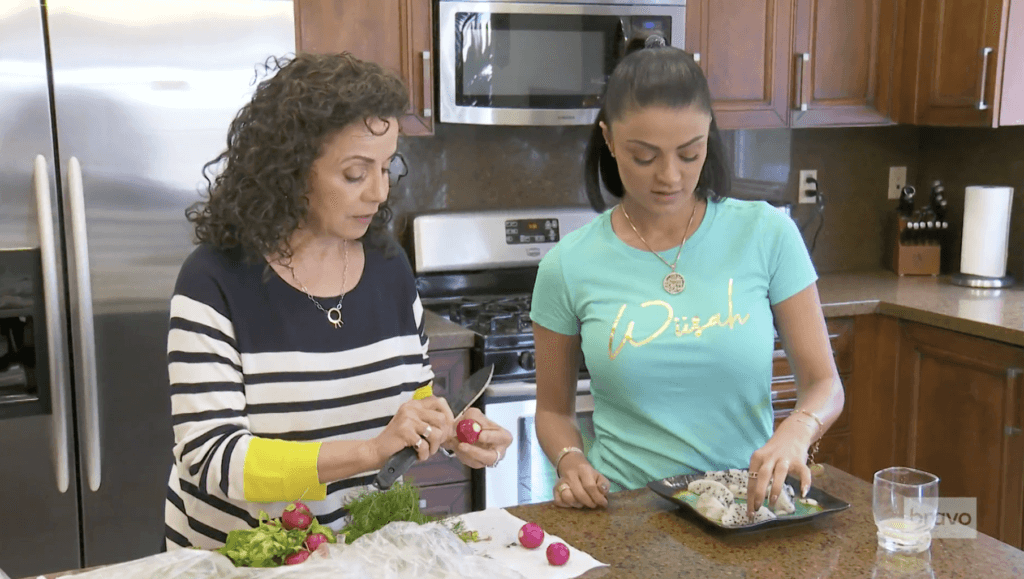 Mike and Paulina are having dinner out. They talk about going to Sara’s house over the weekend. After the disastrous pool party earlier in the season, he’s a bit reluctant to attend. He’s worried about seeing MJ again.

Mike’s parents join the couple. He shows them his new gold medallion. His father gave it to him, and Mike had it made into a necklace. It cost thirteen-thousand-five-hundred dollars. Yikes! But Mom doesn’t care about the necklace. She wants to know what’s going on with the family property. Mike’s in charge of turning a duplex into a condo building.

He’s getting emails daily from his contractor. The old building has been cleared. Mike is excited his parents have faith in him. For once. And it’s only taken forty years to get it!

Mona brings up children, asking Fred whether Nema should father kids. Nema vows it will never happen. Fred gets up and hugs Nema. Mona starts crying. Nema steps outside and his father follows him. 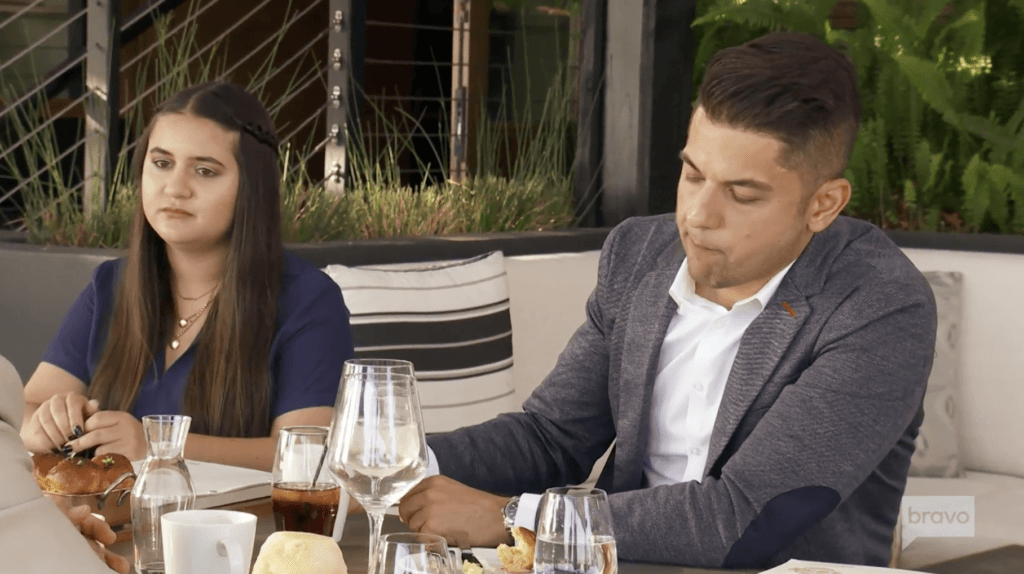 Nema admits he’s tired of being angry. He and Mona should have grown up together, but there’s nothing he can do about it now. He just wants to be free — and maybe have a deeper relationship with his father. Fred tells Nema how much he loves his son and hugs him. Fred promises that they’ll fix their relationship, even though Nema thinks it’s too late. Nema says he forgives his parents, but frankly, I’m tired of hearing him whine. There. I said it!

The day of Sara’s party has arrived. This will be the first time MJ has seen Reza since Hawaii. She hopes things go better than the last time she attended Sara’s pool party.

Reza Farahan will have to tell MJ that the restraining order will remain in place. It’s going to get awkward.

Shervin arrives first, followed by Vida and Nema. Mona and Destiney are on hand. And guess who else is there? Sara’s brother, Sam. The same Sam Destiney slept with. Mike and Paulina greet everyone. GG strolls in wearing a faux fur coat the color of a blue muppet. And then MJ arrives.

Reza Farahan and Adam are the last to show up. Reza wants to stay away from Vida. He tells Shervin to keep that woman away from him.

He blows kisses to MJ, and she asks to speak to him after he gets a drink. Vida is surprised Reza didn’t come over and say hello. MJ warns her mom not to attack Reza.

GG wants to meet Sam. When she sees him, she’s not impressed. Destiney slept with that? Why?

Mercedes “MJ” Javid and Reza finally go off for a talk. He admits he wants to avoid Vida. He’s worried she will put a wedge between them. He overheard her talking shit about him to Nema. MJ tells him to acknowledge Vida and be polite. Reza makes nice and greets MJ’s mom, gives her a few compliments, and then walks off.

Meanwhile, Mike Shouhed is still bitching about MJ’s comments in Hawaii. What if she came at him sideways at the sip and see? That would have been uncomfortable for everyone. Besides that, she owes him an apology. Um…excuse me, Mike. She apologized in Hawaii. She apologized to you and to Paulina. I don’t think she was out of line. Mike is controlling.

In the kitchen, MJ and Nema talk over canapes. Nema gives her the news — Reza isn’t dropping the restraining order against Tommy. MJ’s shocked.

Destiney steps into the kitchen. She doesn’t want to hear the drama. She’s busy dancing by herself in a skin tight jumpsuit when Reza walks in. Nema admits he told MJ about the decision to keep the order in place. Nema and Destiney disappear to let them talk.

Reza Farahan says he’s not pursuing criminal charges. The restraining order will stay in place for another six months. What if Tommy gets angry again? What if he comes over and brings a bat this time? What if he hits a tree instead of a cactus? There are plants at stake! 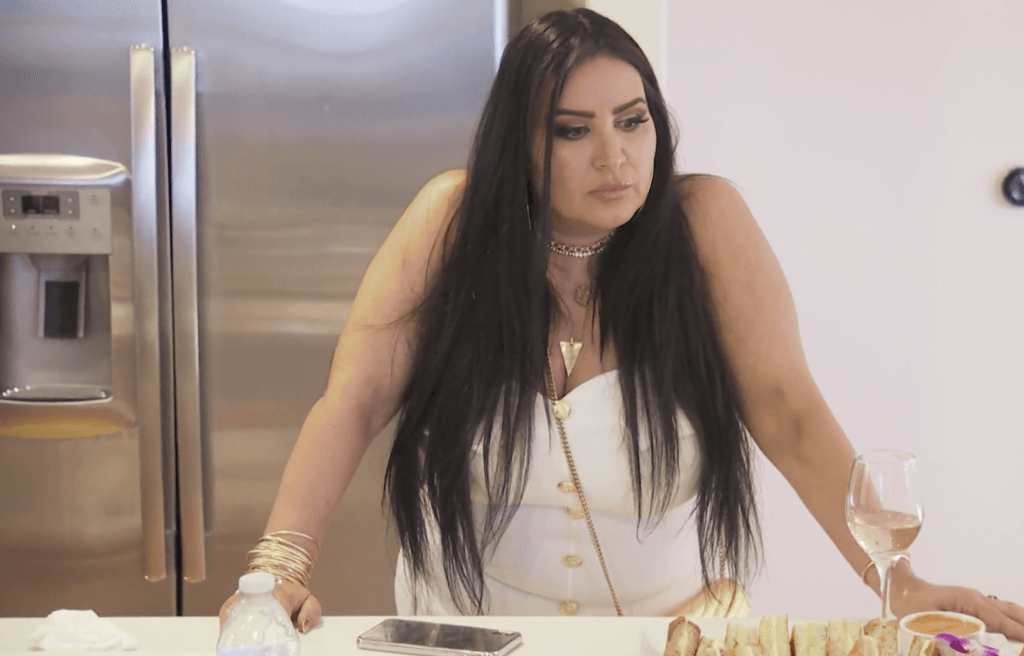 MJ has apologized. Their renewed friendship depends on this him dropping everything. But Reza stands by Adam. MJ is visibly upset. She leaves the party in anger. 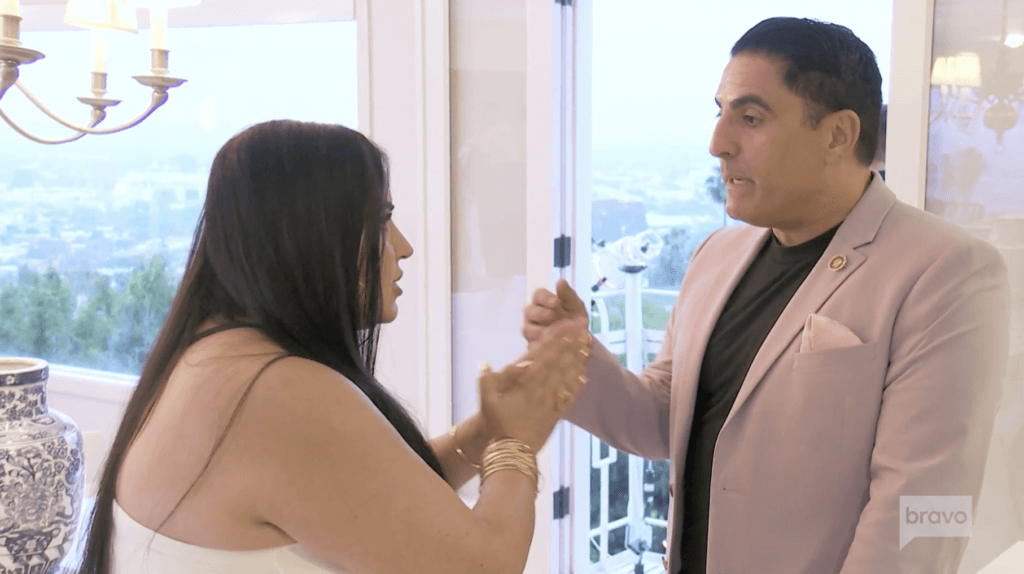 Mike Shouhed says the group aren’t made up of fair-weather friends. So, how did they get to this place?

As Mercedes “MJ” Javid leaves, the rest are taking group pictures, saying it’s a family photo. And that ends our episode.

So, do you think Reza Farahan was right to keep the restraining order in place? Did Mike Shouhed do the right thing by staying away from the sip and see?