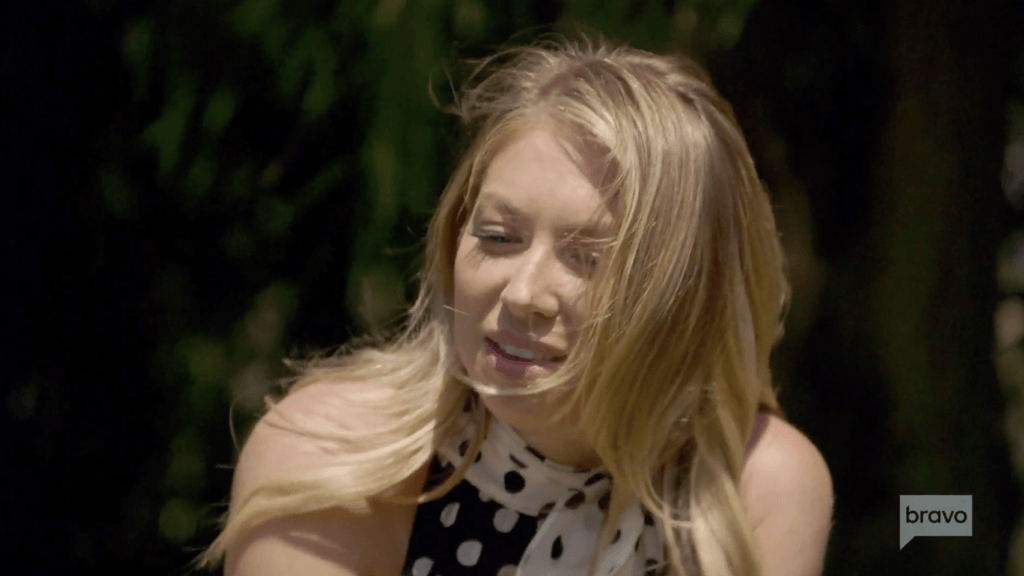 Welcome back to an all-new episode of Vanderpump Rules — A Demon  Bride is Born edition. Yep. In the words of Stassi Schroeder, “I’M F****** ENGAGED MOTHER F******.”

But first, she’s got some groveling to do. Cut to Stassi Schroeder sneaking back into her apartment bearing all of the essential ingredients to make her Italian lover’s fave, cacio y pepe.

Pair that comfort food with an “I’m sorry. I’m an a**hole” style apology by Stassi Schroeder and all is forgiven in Beau Clarke’s world. Poor Beau either has the patience of Job or he’s just a pushover. The jury’s still out on which one.

Once Stassi Schroeder gets the dreaded apology out of the way, she gets back to business asking Beau if they can still go mausoleum shopping together. Beau pretends to mull it over before reluctantly agreeing.

Meanwhile, in Valley Village, the Toms are convening at Tom Sandoval and Ariana Madix’s house to practice for the upcoming softball game. I’ll admit the logistics of trying to figure out whose house the cast is filming at is becoming increasingly difficult now that Sandoval and Ariana are starting to accumulate furniture of their own AND a shiny new Dyson to vacuum up all of the cat hair. How will we ever tell them apart?

Now, back to the meat of the episode aka the only scenes worth watching- Stassi and Beau’s engagement. Stassi and Beau take a leisurely stroll through Hollywood Forever Cemetery while she tries to determine where she would like to rest eternally.

During her talking head, Stassi reveals that mausoleum shopping was all part of her clever plot to entrap Beau forever. “If Beau and I buy a mausoleum, then he HAS to propose to me. It’s the perfect way to ensure that he is committing a lifetime AND after lifetime to me. Till death do us NOT part.”

Fortunately, the mausoleum shopping was also part of Beau’s clever plan too, or the couple may have left that cemetery very quiet. Even quieter than the residents currently occupying the grounds.

Beau asks Stassi to sit with him on a bench as he casually directs her attention to what looks like it could be a miniature urn. He bends down to grab it and then drops to one knee. 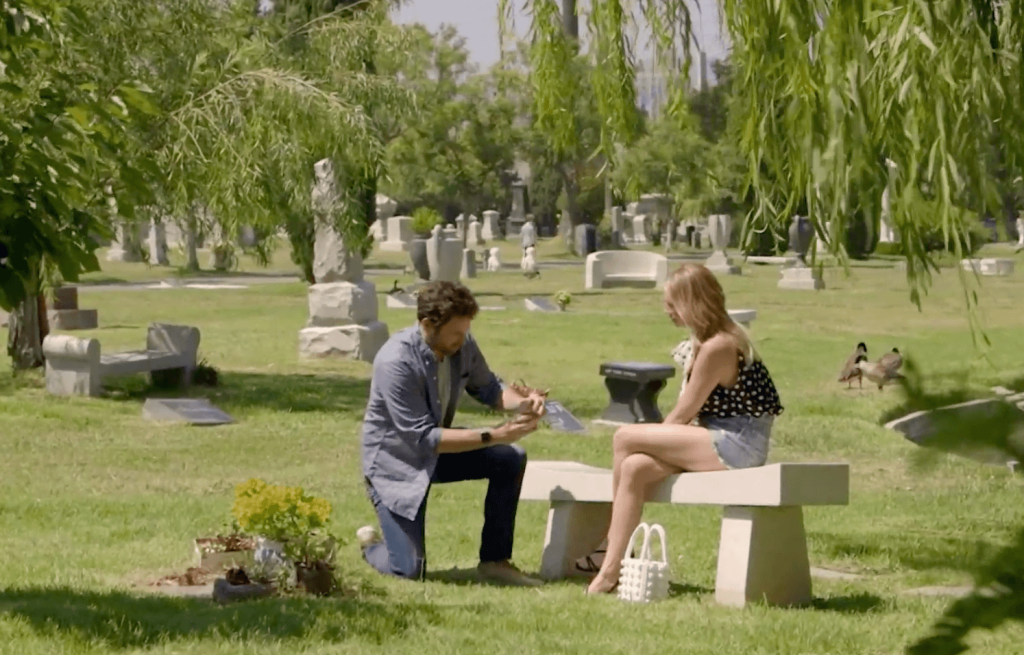 “Stassi, I love you so much. You’ve literally turned my world upside down in the best way possible and there’s nobody else that I want to spend the rest of my life with. Will you take this ring and will you marry me?” he stammers out.

Stassi keeps whispering “OMG” on repeat while giggling uncontrollably. Beau gently reminds her that this is the part where he’s supposed to put the ring on her finger.

Once Stassi gets a better view of the 3.5-carat hand-cut rock the giggling turns into inaudible shrieks that could wake the dead. No pun intended.

While Stassi admires her new ring, Beau explains that Lisa Vanderpump has offered up her home for an engagement party and the plan is to head to there next.

Before they head over for the party, however, Stassi immediately gets to work, calling Katie Maloney Schwartz so they can collectively shriek over Beau finally putting a ring on it. Cue the high pitched squeals.

Back at Villa Rosa, Lisa is running around putting the finishing touches on the party. Katie and Lala Kent arrive just in time to roll up their sleeves and join in on the effort but it’s obvious they’re most interested in calling Kristen Doute to gloat.

Lala Kent dials up Kristen feigning sympathy at her plight while simultaneously rubbing her nose in it like a wayward puppy. As one can imagine, the conversation goes south quickly.

Lala asks Kristen Doute how she’s taking the news. Kristen cuts Lala short responding, “I already know they got engaged. I already know that you guys are partying and I already know that I’m not welcome there. So I hope you guys have so much fun tonight.” Well, there you have it, Lala. In the words of RHONY’S Dorinda Medley, “How am I doing??? NOT WELL, B****.”

But you know how the saying goes, Kristen Doute works hard, but her on-again-off-again dud of a boyfriend Carter works harder. While Stassi and Beau are en route to there engagement party Beau receives a nasty text from Carter. The text message reads, “Don’t forget to thank Kristen for hooking you guys up. She made it happen and now you and Stassi treat her like s***. That’s some cold-blooded s*** right there.” YIKES.

Stassi and Beau eventually arrive at the party and greet all of their guests including Stassi’s mother, father and brother whom she had no idea would be there either. SURPRISE! Lisa even offers up a dress out of her own closet for Stassi to wear since she’s a tad underdressed for her own party. Think Daisy Duke’s and a black and white polka dot tank. Stassi graciously declines, however, stating she feels great. After all, who needs a fancy dress when you’re sporting a ring the size of a chicken nugget on your left hand? 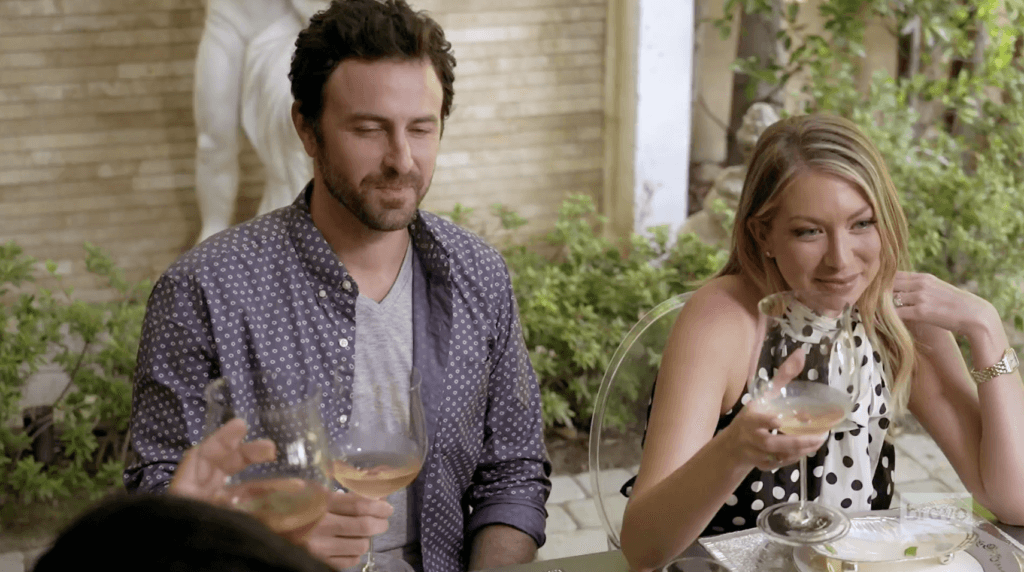 The beautiful dinner takes a bit of an awkward turn as one can practically smell the jealousy off of newlyweds, Jax Taylor and Brittany Cartwright. Brittany can’t help but wander out loud why Stassi and Beau are given such preferential treatment. “How did you get Lisa to do all this for you guys?” she asks. 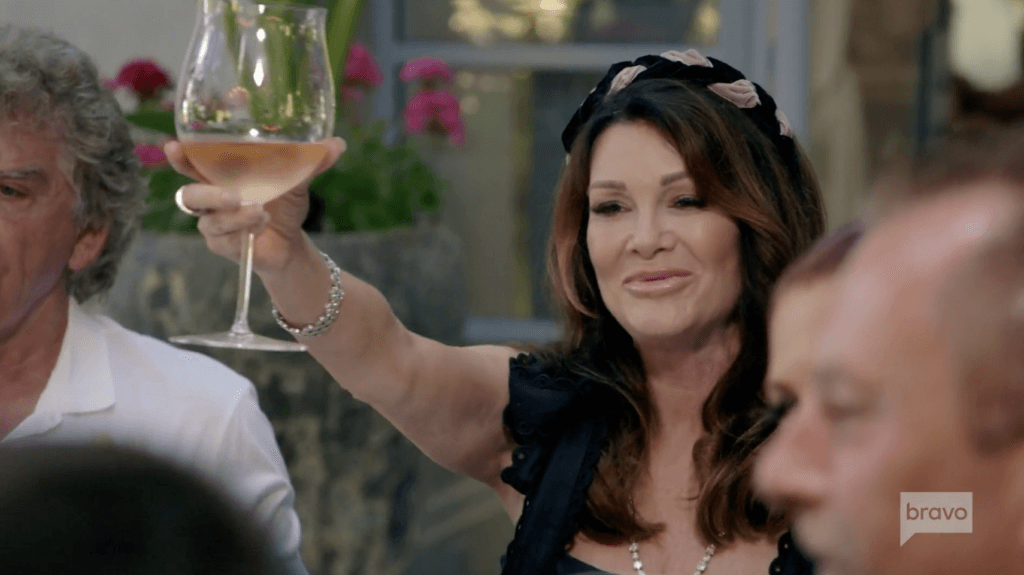 Meanwhile, Scheana Shay is at the end of the table admiring how tall Stassi’s little brother, Nicolai, has grown and more than likely questioning how young is too young.

The happy couple continues to bask in their engagement glow with all of their loved ones gathered around while dining off of mini-charcuterie boards and sipping out of crystal goblets. Congrats Stassi and Beau! Eat, drink and be MARRIED! Cheers!

The next day, poor Kristen is still reeling from the aftermath of being excluded from her former best friend and current business partner’s engagement party. Jax, being the avid grass cutter that he is, comes over to help Kristen with her lawn. Brittany comes too,  maybe to make sure Kristen is okay but probably also to make sure Kristen’s lawn isn’t the only thing her new husband is servicing-if you catch my drift. As the saying goes, old habits die hard. 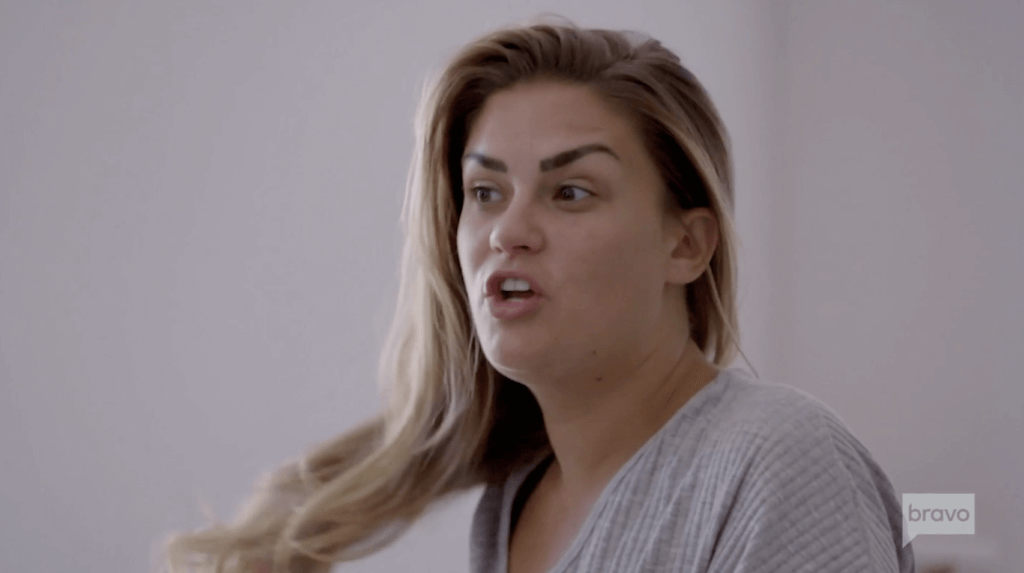 Kristen Doute reveals that she had Carter pick up her emotional support dogs and take them back to his place. It’s not fair they see her in her current state. Well of course. As one does… 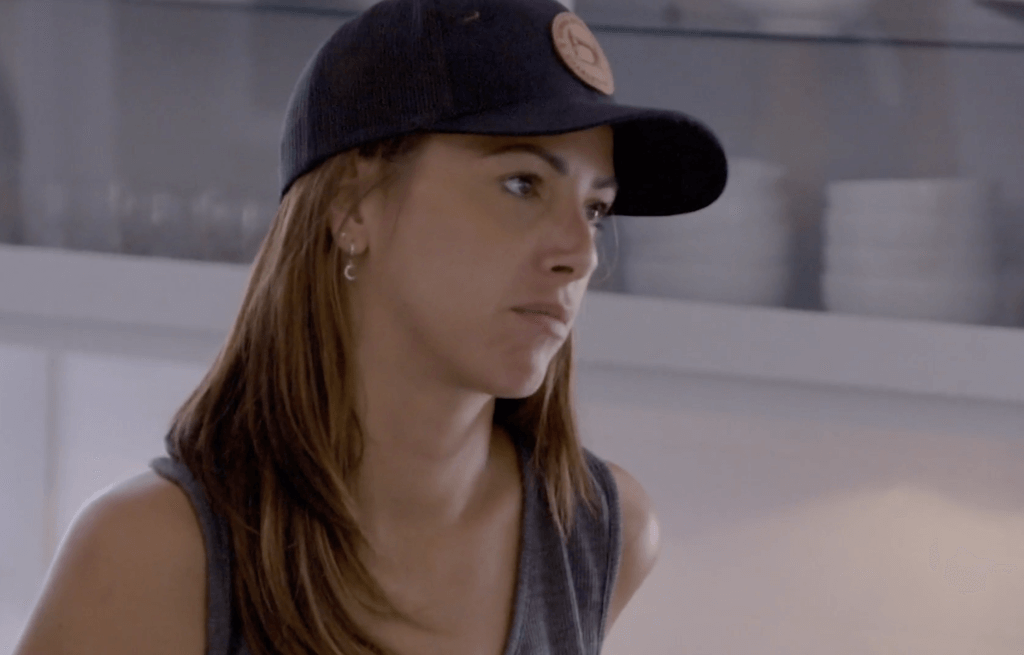 The softball face-off between SUR and TomTom goes about like one can imagine. Jax and Sandoval bicker back and forth about the rules of the game. Jax rather astutely points out that although he might turn to Sandoval if he was in search of bronzer for his calves, he is certain Sandoval knows nothing about the game of softball.

In the end, SUR defeats TomTom and while he appears to show excellent sportsmanship, I think it’s very possible ol’ Sandy spent the remainder of the day and night crying into his silk pillowcase. 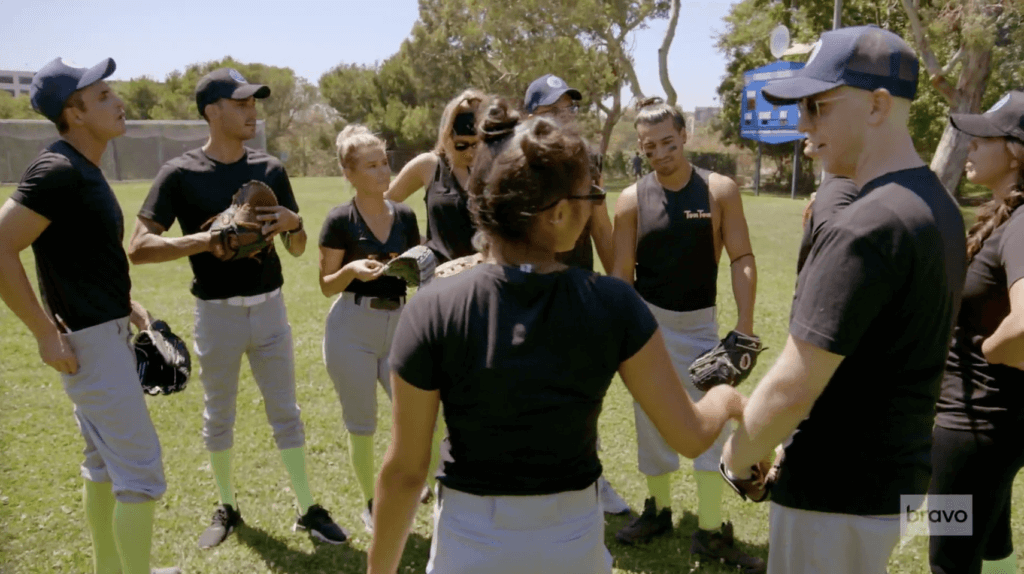 Will Stassi  take her new title of Bride-to-Be in stride or has Beau turned our Queen Bee into a Bridezilla? Tune into Vanderpump Rules next week to find out!