Vicki Gunvalson, wants fans to boycott the upcoming season of The Real Housewives of Orange County following her exit from the Bravo reality series.

Bravo fans know that Vicki Gunvalson exited the Real Housewives of Orange County with her middle finger up. And when fans recently shared their disappointment over the OG’s departure  — Vicki Gunvalson suggested they “boycott” the show. 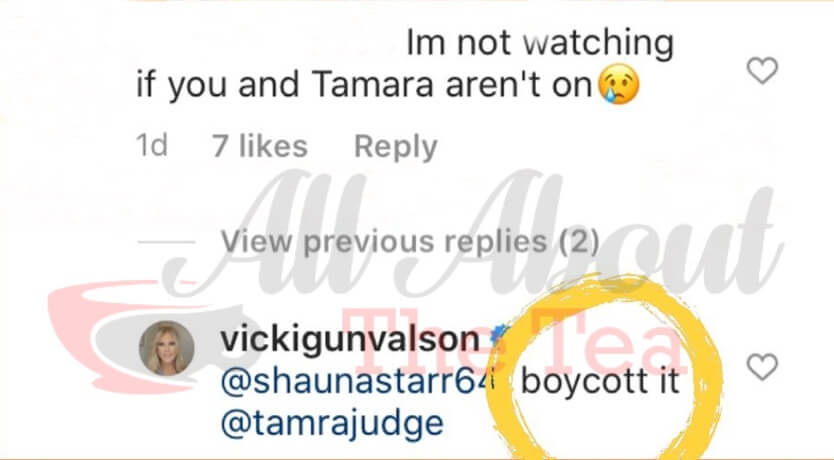 Vicki Gunvalson, 58, may not be returning to The Real Housewives of Orange County for Season 15 but don’t count out the OG of the OC just yet.

“Bravo did approach me with a new show…so I’m entertaining that…it looks like I’ll be going on that…really exciting who’s going to be on that with me,” Vicki dished on her new  podcast — Whoop It Up with Vicki.

Vicki Gunvalson dished about how she was navigating her new normal on her new  podcast — Whoop It Up with Vicki — and confirmed that Andy Cohen was still in her corner.

“I called Andy the other day, ‘I said did you really fire me?’ He said ‘no honey I didn’t fire you, you’re going to be on another show, just stay tuned…there’s lots of stuff coming up for you…we just needed to shift it up…’” Vicki spilled.

“I don’t get it…why me? I got fired, what did I do wrong?” Vicki asked Andy, who responded, “You didn’t do anything wrong.”

Vicki Gunvalson also reiterated that her RHOC exit was a hard pill to swallow.

“I don’t want to be forgotten,” she said. “I’m super sad, I hope the legacy I started will carry on.”