Aloha! The Shahs of Sunset are still in Hawaii, celebrating the birthday of Mike Shehoud’s girlfriend. Reza Farahan and Mercedes “MJ” Javid have made up. Sort of.

Now it’s a new morning, and as everyone gathers for breakfast, the group plans the day and the boys apply fake tattoos. Paulina wants to go surfing, but Mike Shouhed, the bossy boyfriend, insists she go with him to see the bees. MJ has seen this pattern before. Mike is controlling and makes his women play by his rules. 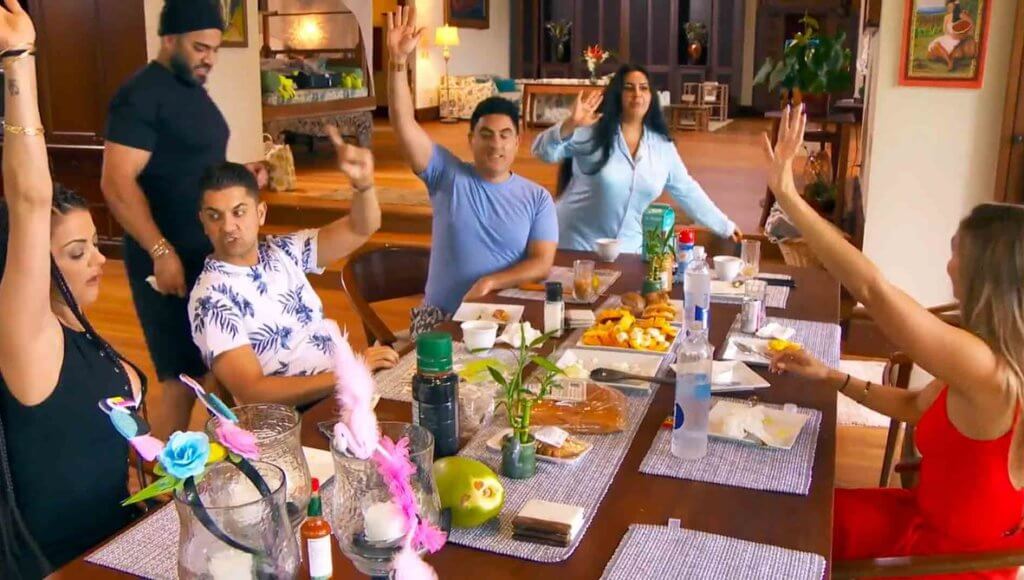 Mercedes “MJ” Javid goes outside to facetime husband, Tommy, and baby Shams. She’s super homesick for her family, but she delivers good news. Reza plans to drop the charges against Tommy, the cacti killer.

Golnesa “GG” Gharachedaghi dances without music as she pours a glass of wine. It’s just after lunch, but anytime is wine o’clock, right?

After getting a shower, MJ walks backward so the camera won’t see her ass. But we get a good view of it anyway.

GG goes with the boys to see the bees. In the van, she asks how they like to kiss. Tongue or no tongue? Frame the face or not? Nema Vand admits he and GG have never kissed, even though they’ve flirted. So, they take the time to mash their lips together. It was chemistry free. 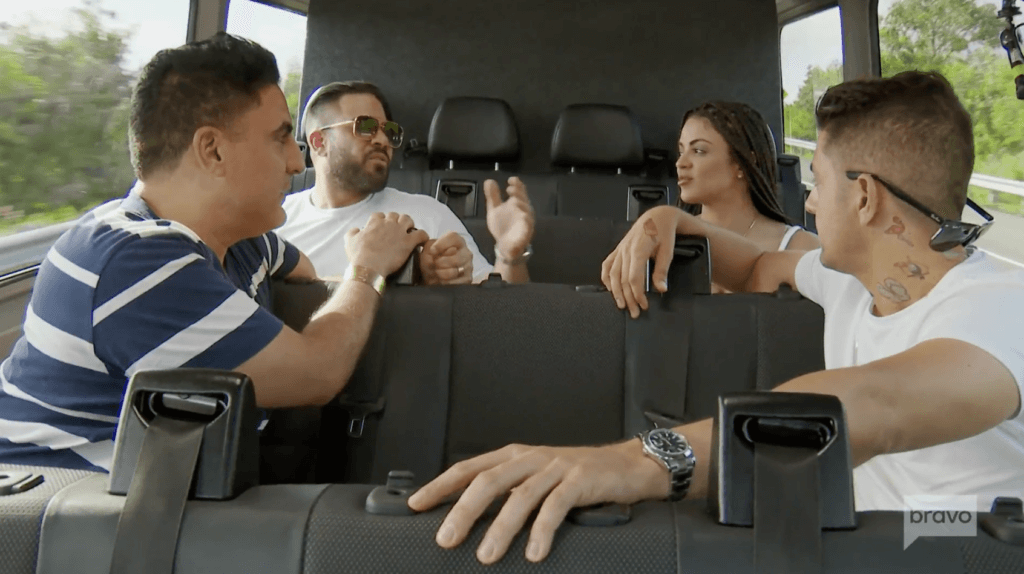 When arriving at the apiary, the beekeeper wants to know the group’s history with bees. Well, it just so happens that GG was a bee in a previous life. And the bee is her spirit insect. After looking at her like she’s a freaking lunatic, he shows them the safety equipment.

MJ, Sara Jeihooni, Shervin Roohparvar, and Destiney Rose go surfing. And in a Mike-defying move, so does Paulina. Because of her tight thong, we get another dose of MJ’s ass. Destiney and Paulina aren’t really surfing. They sit on their boards and soak up the rays. 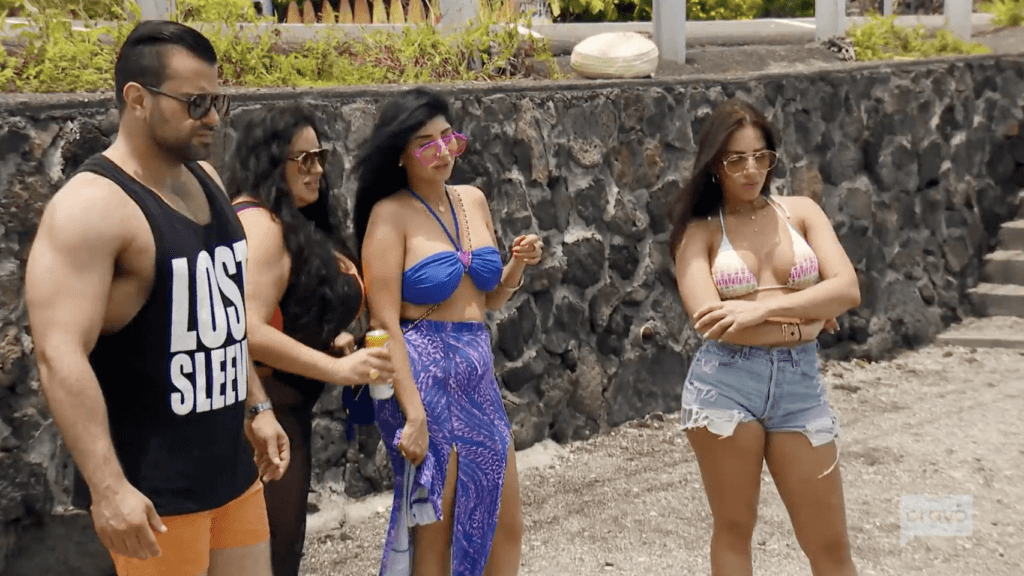 The surfers head back to the house and have a snack. MJ and Paulina talk in the kitchen. MJ says that Mike keeps Paulina under his thumb. MJ’s happy she’s got a white dude who isn’t so strict. Shervin listens in and shakes his head.

The bee people are doing arts and crafts by making a bee hive candles. Mike receives a text from Paulina, complaining about MJ. Mike’s angry that she has stuck her nose into his biz, so he declares he’s leaving.

An angry Mike returns to the house and finds Paulina. She’s upset that MJ shared her own past of having a controlling Persian man. Meanwhile, Reza hunts down MJ and tells her that Paulina is hot over their conversation. MJ thought they were bonding. She had no idea that Paulina was offended. 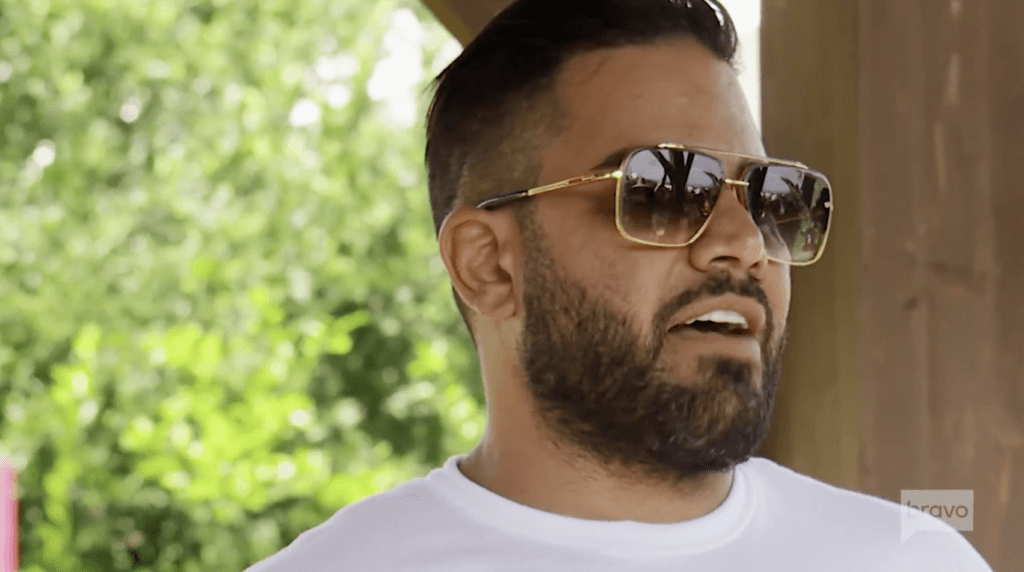 Everyone reconvenes for lunch. Mike confronts MJ, wondering why she’s talking shit about him to Paulina. MJ says that Persian men are different from white men. It was a harmless comment. GG, tired of MJ’s antics, leaves the table.

Mike Shouhed is ready to cut people out of his life who aren’t supporting him. Hey, he’s starting to sound like Reza. And speaking of Reza, he doesn’t understand why MJ would denigrate Persian males when she’s in a group of Persian males. Wth, MJ? 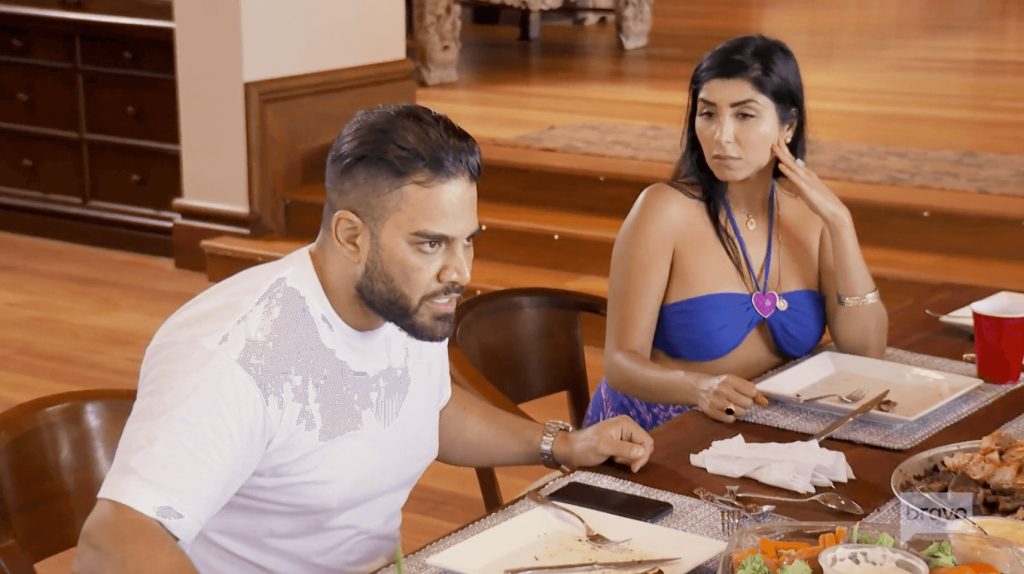 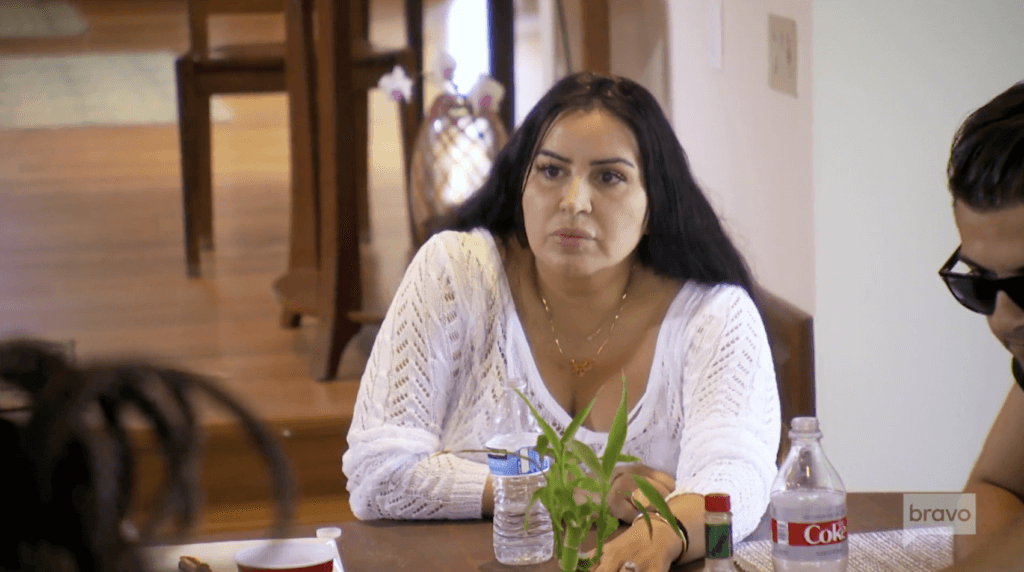 Once MJ leaves, Destiney pipes in. She agrees that Persian men are controlling. Shervin says Adam has to ask Reza if he can fart.

Paulina and GG go outside to talk. GG sympathizes with Paulina, saying MJ can be fun, but she’s calculated. She preys on people’s vulnerabilities.

Reza and Destiney talk to MJ. MJ doesn’t want to ruin the rest of the trip, so she goes outside to speak to Paulina. And happens to overhear GG talking shit about her. MJ apologizes. She never said Mike was controlling, she said he was strict.

GG leaves, and MJ sits down. She insists her intentions were good. But Paulina feels that MJ goes after every person in the group, and today was her turn.

At this point, MJ feels that everything she does is wrong. She’s tired of the group judging her.

Everyone but MJ, Mike, and Paulina go to the pool. Nema says this trip will show Paulina how the friends interact with each other. They’re all knee-deep into each other’s business. He doesn’t think MJ had bad intentions. Shervin says MJ is just being MJ. You have to accept the whole package.

Destiney admits MJ has said some shitty things to her in the past. She has a bad delivery system, but ultimately, MJ means what she says, no matter how much she apologizes later.

Everyone meets for dinner outside. MJ comes out last. She hugs Paulina, and Mike is glad that MJ apologized. But he still doesn’t trust her.

Mike planned a luau to celebrate Paulina’s birthday. Just one problem — in a group of Muslims and Jews, no one eats pork. Well, except Destiney. As we saw in an earlier episode, she has a mad love for bacon.

Paulina thanks everyone for coming. Nema gives Paulina credit for making Mike a more decent human.

They watch the fire throwing show, and GG is high, so she’s freaking out. She hides behind the table to stay safe—even though she’s a few yards from the fire baton twirler. 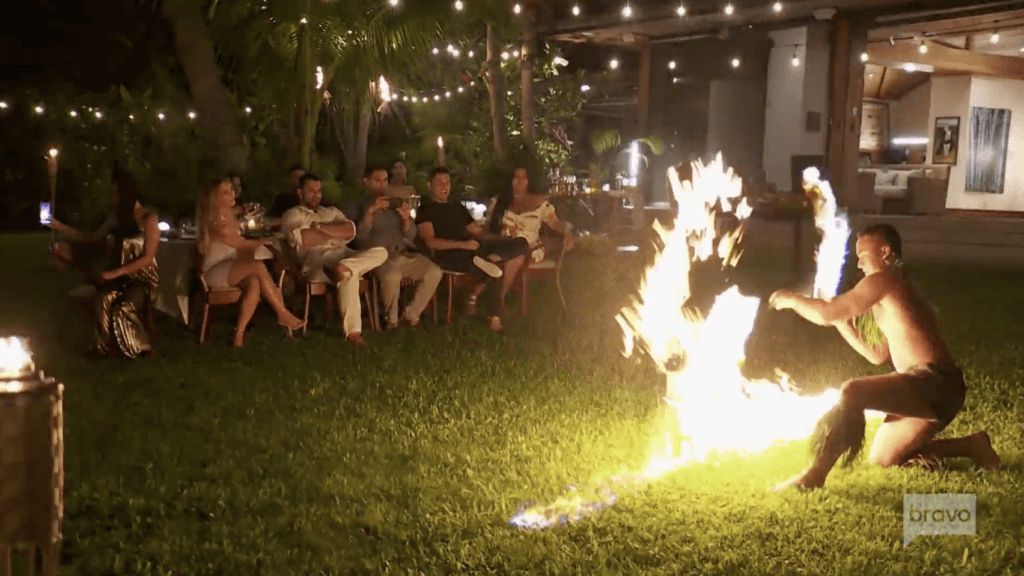 As the group breaks up after dinner, Nema keeps trying to hook up with GG. Mike urges the two to kiss again. GG declares she’s just drunk enough to do it.

Reza brings up Nema’s ex, Erica. Nema puts everyone on notice to stop talking about Erica. Because he lacked a mother figure, any woman in his life becomes like family. So yes, he pays her rent, but he also gives her credit for saving him when he was at his lowest point.

Nema flounces off inside. GG follows him. He’s upset things didn’t work out with Erica. But when GG sees a roach, she screams like a little girl. There’s one on the floor and one on the ceiling.

Paulina pulls everyone back to the table. She hands out cards where they can write what they’re feeling about each other, things they’re too afraid to say out loud. GG needs a little more herb before she can get this deep. 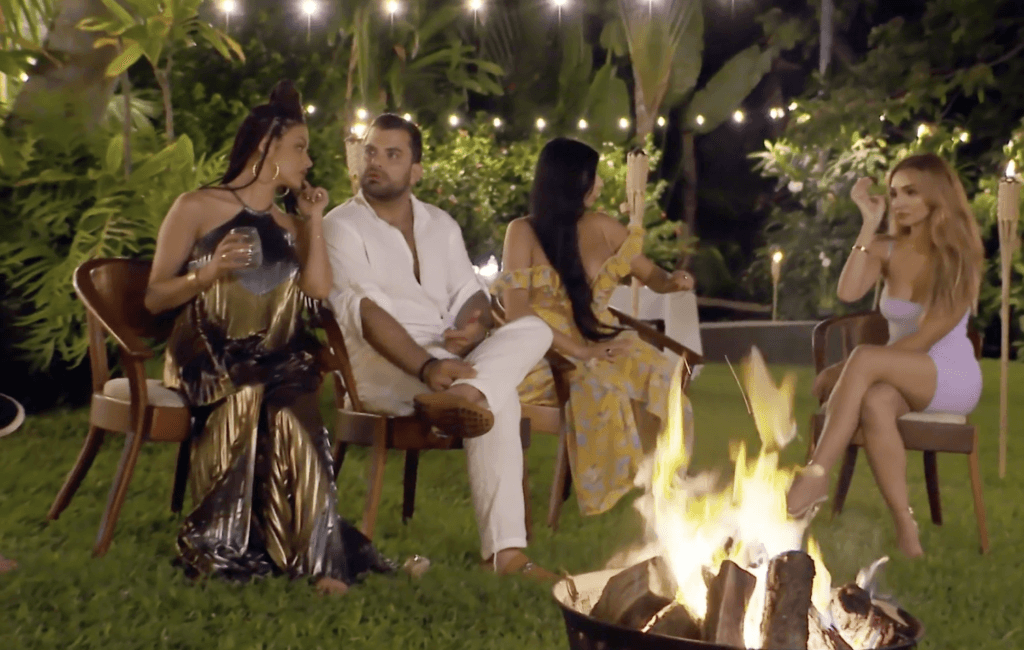 They gather around the fire. Nema is deemed passive aggressive. GG takes a swipe at MJ. And the group thinks Sara needs to clear out the skeletons in her closet. And that skeleton’s name is R. Kelly.

Sara starts crying, saying how hard it was to go through all the drama in the news. She has no skeletons! Destiney didn’t write that comment, but she agrees with it. Destiney and Sara briefly hold hands. Sara thinks everyone is looking for her weaknesses so they can exploit them. 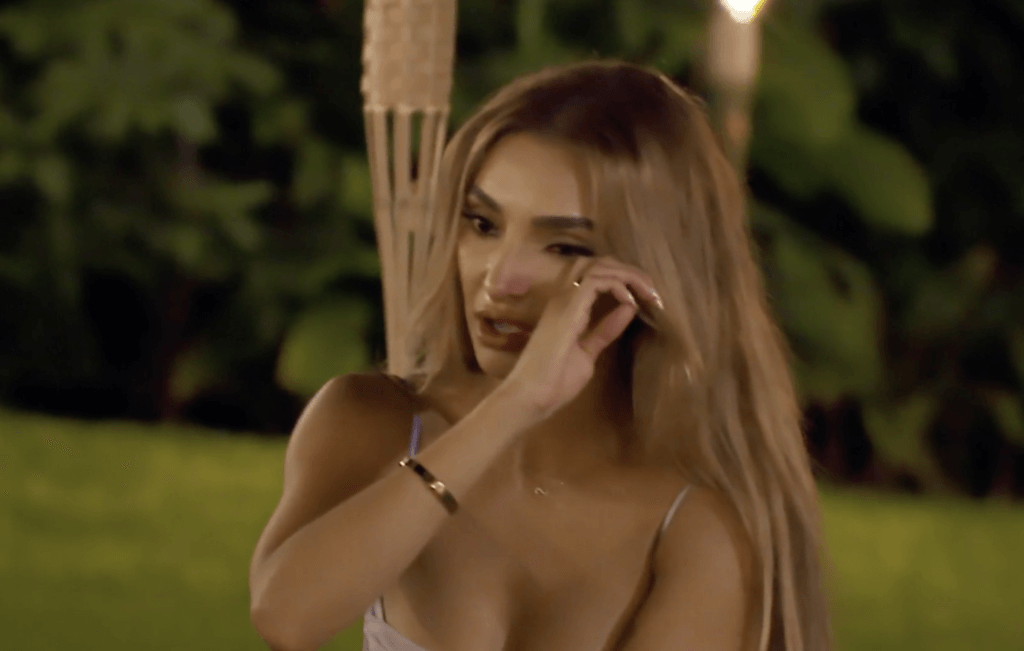 MJ says she doesn’t want to hurt people any more. Reza talks about how difficult his argument with MJ has been on him. Mike says he’s no longer going to partake in the backstabbing. Negativity is so 2019.

The next morning, GG and Nema talk about what happened between them the night before. He didn’t want to have sex, but they kissed in the hot tub. GG takes two paper dolls and demonstrates what happened. She bit his lip, which hurt. There was bumping and grinding, but no insertion. Nema didn’t want to take advantage of her when she was drunk and high. What a bastard! 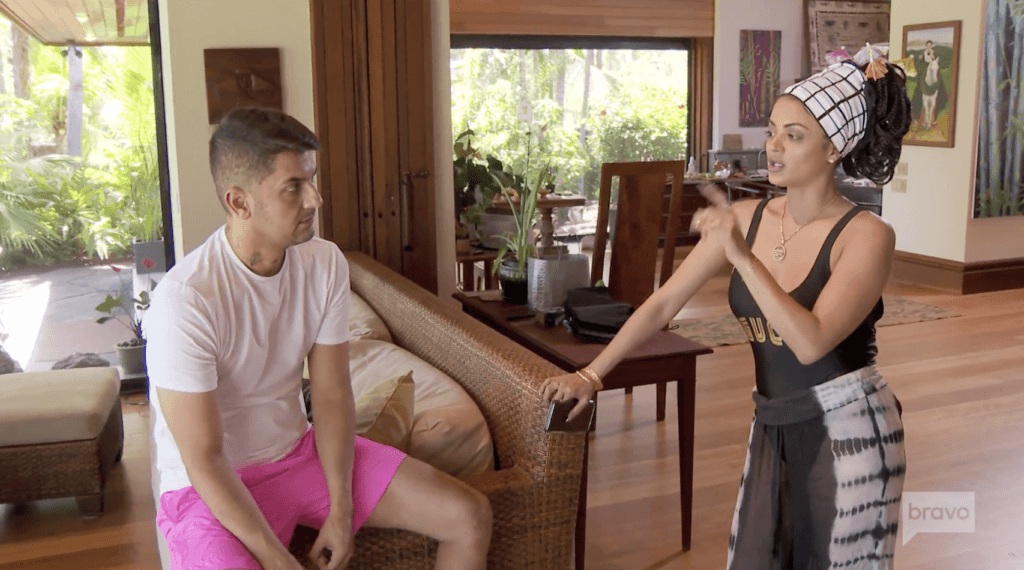 Mercedes “MJ” Javid  and Reza meet outside and take selfies. He lies down and puts his head in her lap. They talk about how their friendship is getting back on track, but she’s worried about Tommy. Has Reza really dropped the restraining order, because Tommy hasn’t heard anything from his lawyer. 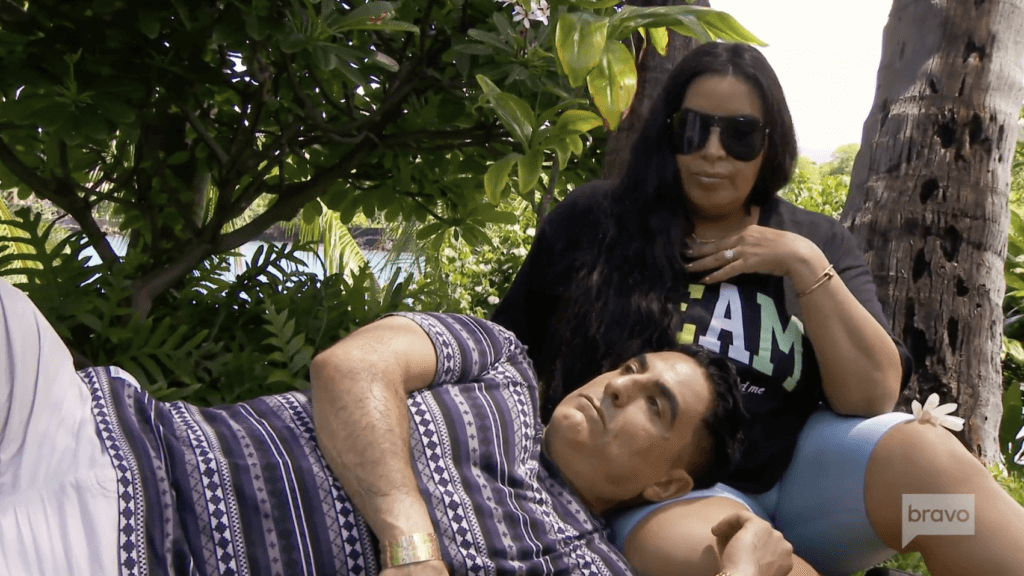 Reza Farahan says he’ll contact his own attorney when he gets home. MJ says he needs to follow through with that promise. That’s the only way to heal.

And that’s our episode of Shahs of Sunset. So, if Sara weren’t on the show, would you notice? Will Reza really drop charges on Tommy? And did MJ have bad intentions when she spoke to Paulina?