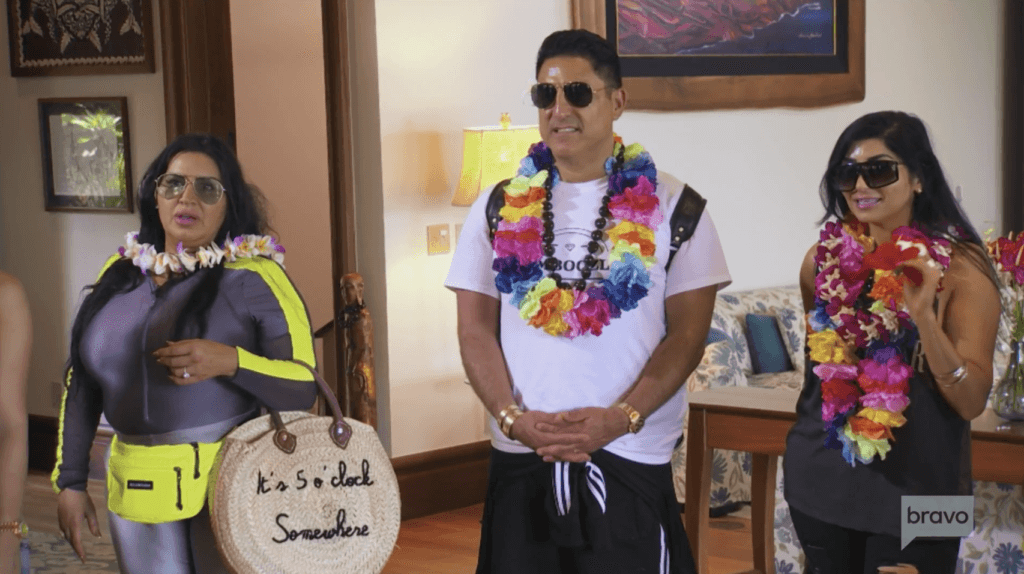 The dysfunction continues on this week’s episode of Shahs of Sunset. Our opening scene shows Mike Shouhed, his girlfriend, Paulina, and her dog getting chi tea. Mike loves Paulina. He loves her pooch. And he loves her outfit. Then he asks what she thinks about their time at Boots and Brews last week. Paulina finds Mike’s friends overly dramatic.

Mike Shouhed thinks the country music festival was a good first step in getting everyone back together. Now, he plans to take Paulina to Hawaii for her birthday. But there’s a catch: he wants to bring his crew along. Paulina points out the friends in this group are in their forties. Shouldn’t they be able to vacay on their own? Well, sure. But then Bravo wouldn’t foot the bill, so the friend group gets an invite, whether Paulina likes it or not.

Nema Vand’s mom is in town from New York. She’s staying with his siter, Mona, and is cooking up a storm. Mom gives Nema a jab about his new ultra white teeth.

When Mona has kids, she definitely wants Mom to come and live on the west coast. Nema? Well, he’s not that excited about having kidlets. His own childhood was pretty messed up. When his parents were divorced, Nema’s dad took custody of him and moved to California. His mom got custody of Mona and stayed in New York. It messed him up, not having his mom in his life. And now, he has no desire for children.

Nema Vand asked his mom to write him a letter, explaining what happened, why his parents divided the children. She did so two years ago. She doesn’t know what else she can do for him. And here’s the kicker — Nema never read the letter. He’s worried that his relationship with his dad will be forever damaged if he does.

Across town, Destiney Rose and Mercedes “MJ” Javid meet up at a coffee shop. MJ starts by saying Destiney’s energy seems good, but there have been a lot of lies going around, centering on Adam’s sexting other men and playing naked Jenga when Reza Farahan went out of town. MJ thinks the drama should have stayed between Reza and Ali. MJ pleads for a calm conversation. 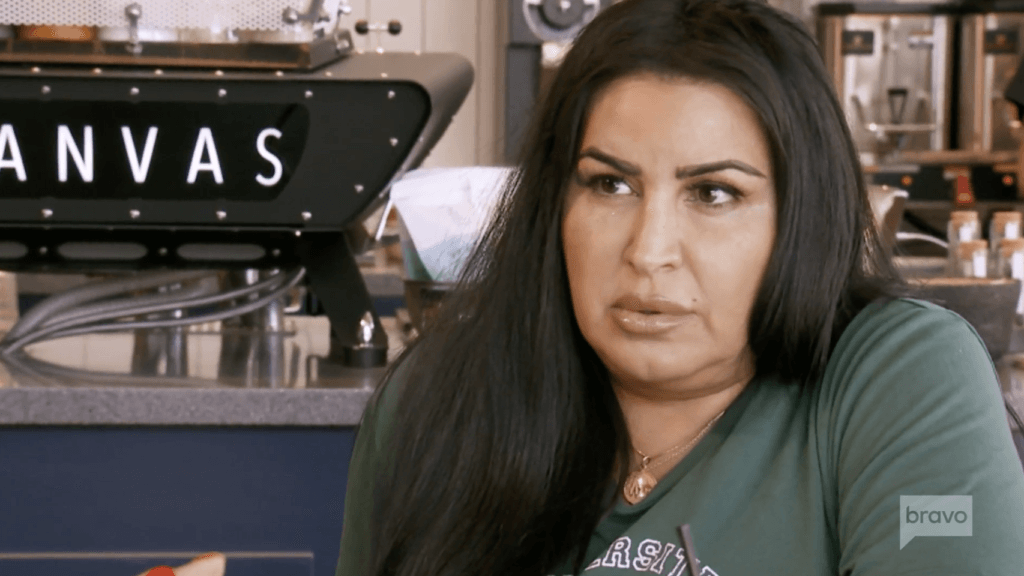 Destiney Rose feels betrayed by MJ, who started the whole thing by putting Ali up to bringing the accusations against Adam on camera. Her trust is broken.

And guess who shows up? Ali! Destiney feels set up. What have these two planned? Destiney barely speaks to Ali while MJ steps up to the counter to order a drink.

MJ urges full transparency — and she owns her part. She knew Ali was tired of Adam’s aggressive texts and urged him to speak to Reza about the situation. And Ali admits he improvised (did he memorize a script or something?) by telling Reza that MJ was concerned about his marriage to Adam. MJ denies saying anything of the sort, and Ali agrees. 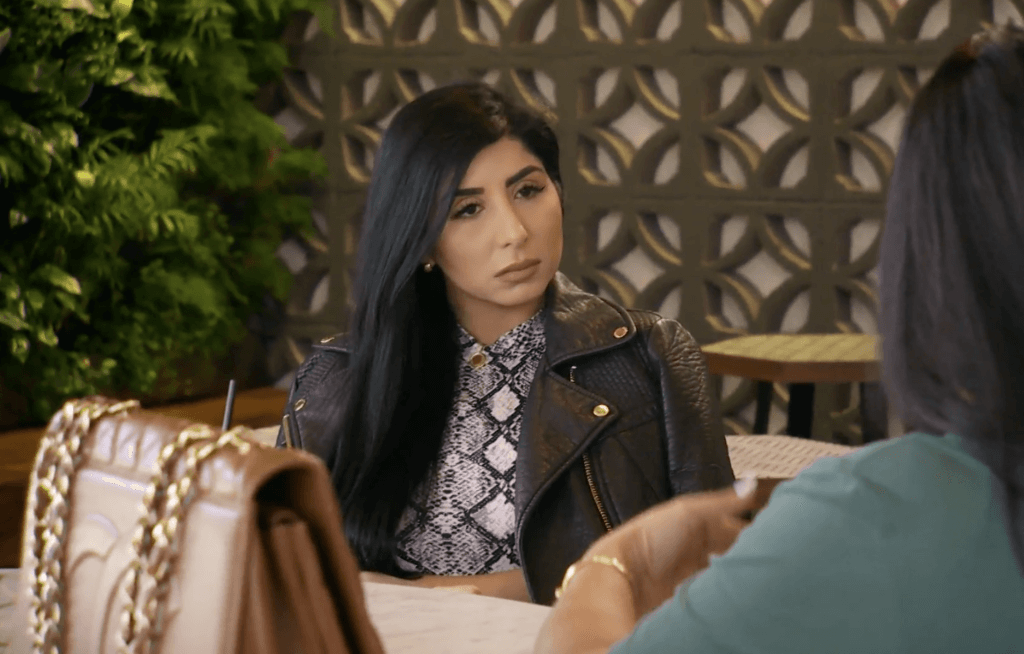 Mercedes “MJ” Javid wants to continue her friendship with both Destiney and Ali. Can they just move forward? Destiney asks MJ if she has good intentions. Yep! She sure does, and they hug it out.

That night, Reza and Adam are at home. Reza is leaving town without Adam and warns him against playing naked Jenga with anyone while he’s gone. They sit on the couch, surrounded by their animals, and Adam admits he did mention naked Jenga to Ali. But he was only joking. Reza Farahan says, with a straight face, that he doesn’t approve of Adam engaging in sexually inappropriate behavior. It’s a respect thing. The bottom line is that Reza feels publicly humiliated, and that’s what’s really bothering him. He tells Adam this is why people get divorced. He sure likes to throw that D-word around a lot.

Reza Farahan isn’t sure he wants to go to Hawaii. He doesn’t want the group to be further disrupted by his drama.

Adam drops a bombshell. Even if Reza and MJ make up, he never wants MJ at the house. He’s putting his foot down on this. In fact, he never wants to talk to her ever again. Ever! Reza agrees, because this is Adam’s home, too.

This puts Reza in a difficult spot. He wants to reunite with MJ, but he wants to respect his hubs, too. How can he do both?

Nema Vand and Mike meet up at the plastic surgeon’s office for Botox injections. I guess these two are over their snit from earlier this season. Nema admits he sent an I’m-so-angry-with-you-Mom-and-Dad email. Now, Mona won’t talk to him.

Mike Shouhed says that either Nema needs to let go of the anger or distance himself from his folks. All that anger and stress will damage him. Because Mike grew up with both of his parents, he understands that Persians who fled Iran faced overwhelming obstacles. Nema is being too hard on his parents.

Nema finally reads the letter his mom wrote. She says it was brutal, being separated from her young son. She took several trips to Cali to see him through the years and had to work seventy-five-hour weeks to afford it, mainly because she didn’t get any financial assistance from Nema’s dad. But Nema is pissed. He still doesn’t understand why he and Mona were split up in the first place. The letter didn’t do anything to help. Mike urges forgiveness.

Destiney Rose prances into the bar for a girls’ night out with Paulina the night before the trip. Sara Jeihooni comes in next, with all her blandness. Since Des isn’t boning Sam anymore, she hopes Sara will be nicer. MJ comes next, then Golnessa “GG” Gharachedaghi. She and MJ acknowledge each other — barely. And once all the women clink glasses, they realize they have nothing to talk about.

They finally discuss GG’s operation. MJ offers her condolences with tears in her eyes. They both went through life-altering surgeries in their quest to have kids. GG’s jealous that MJ had a baby, and she wound up with a miscarriage. MJ rounds the table and gives GG a big hug. 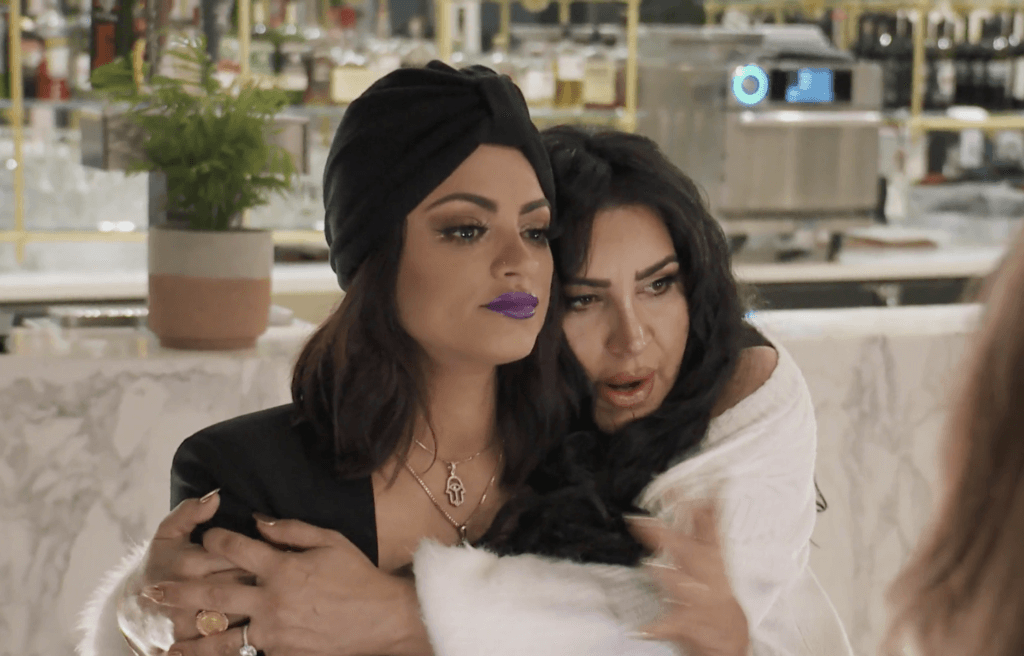 GG isn’t holding any grudges against MJ. But they’re not friends. She’s ready to let the friendship go.

Nema Vand, in his quest to get over his childhood trauma, goes to see his therapist. He talks about the letter his mom wrote, and his dissatisfaction with it. She says that during the breakup of her marriage, her father-in-law came to America and talked Nema’s dad into taking Nema and Mona to Iran for one month. Somehow, one month turned into nine months. He doesn’t understand why that happened. And when they came back to America, Mom took custody of Mona and Dad took Nema to California. He’s angry with his father now.

Nema remembers seeing Iranian guards with guns as he went to the grocery store with his grandfather. How is that better than seeing his parents argue? But the therapist says Mom has laid out what happened from her perspective. Nema’s buried his emotions for so long, they’re ready to erupt.

Nema wants his parents to come together, explain why they split him up from his sister, and admit they were wrong. He believes this will give him closure.

Later, Mike is packing for the trip by taking an inordinate amount of black T-shirts. Reza is taking a ridiculous number of shoes and board shorts. MJ packs and tells her assistant she wants to get her friendship with Reza back on track. She’s been out of the loop for too long. And she’s conflicted about leaving baby Shams behind, but if she can get back with Reza, it will be worth it.

Everyone meets at the airport for preflight drinks and leis. Mike wants Paulina to know his friends can be fun, as well as dramatic.

They arrive on the island and are taken to the house where they’re staying. It’s beautiful and spacious. Nema says the vibe between MJ and Reza is tense. 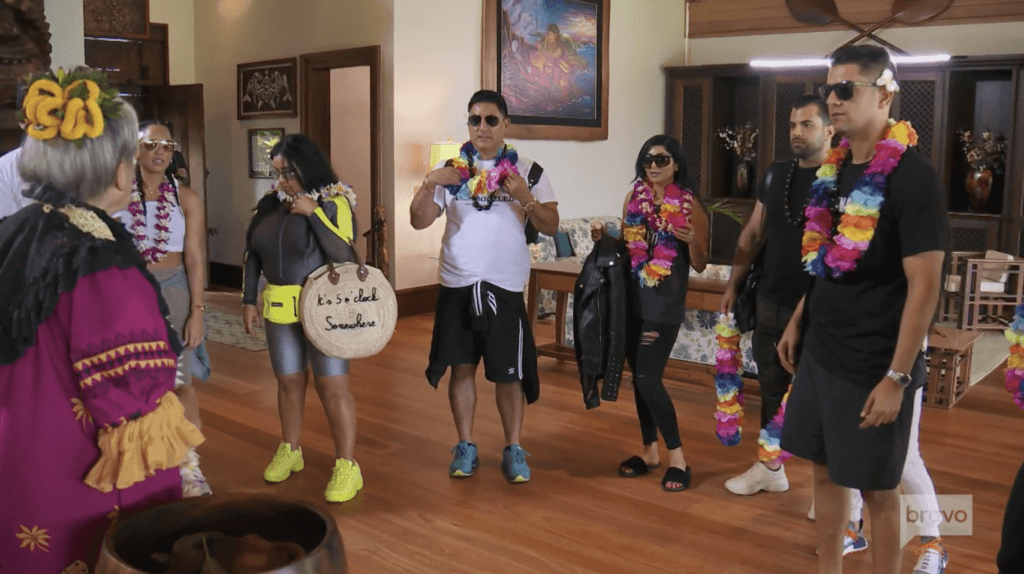 The woman hosting them teaches the Hawaiian way of greeting, by rubbing foreheads together. Reza and MJ are next to each other, so they pair up. Nema and GG greeted each other. They’re back to harmless flirting. 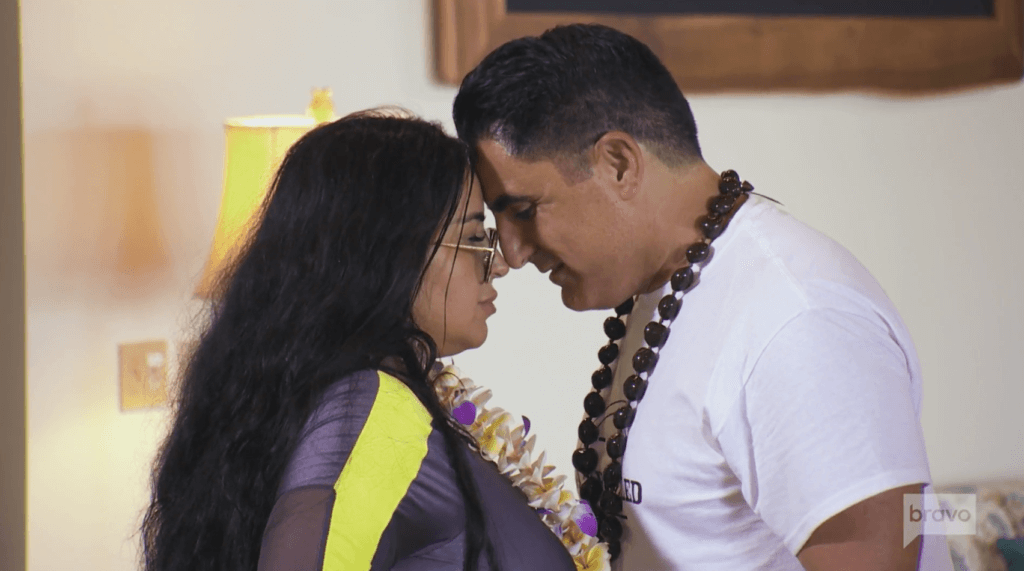 MJ texts Tommy and asks about the baby. GG and Nema get snow cones. Then everyone digs into lunch. Reza wants to have a conversation with MJ and Destiney. He wants to know why MJ was talking to Ali about his marriage to Adam.

Destiney told Reza that Ali came to the coffee shop the other day. Now, Reza wants to know why MJ is still talking to his enemy. Same old Reza, trying to make people choose sides. But Ali was one of the few people who was literally by MJ at her dad’s deathbed. He’s shown up for her in ways no one else has. 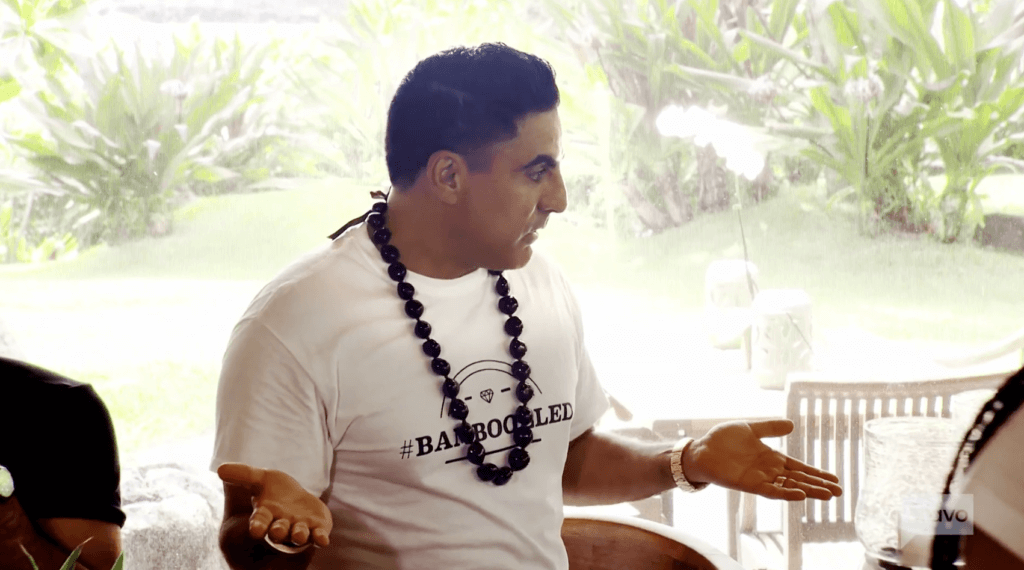 MJ says that Reza has come for her in the past, and she still resents him for it. But if she was going to come for him in return, she would have done it then. Why didn’t Reza call MJ and ask her for the truth — you know, at a time when she wasn’t lying in the hospital post-surgery. 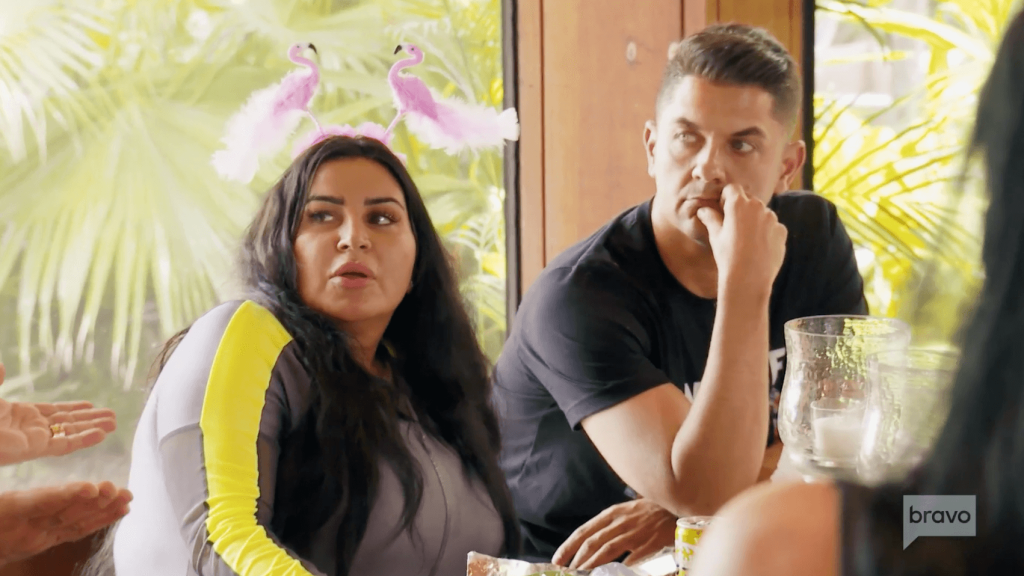 After lunch, Reza finds MJ in her room. He doesn’t understand why she’s so upset. He apologized. And why didn’t she call him when all this went down?

All she wanted was for Reza to be in the delivery room when she had Shams. He didn’t even show up at the hospital. In fact, he demanded everyone side with him or he’d cut them off.

Mercedes “MJ” Javid  admits she was wrong. She was wrapped up in what she was going through, and she says she’s sorry for not understanding Reza’s point of view. He apologizes to MJ. He’s no longer angry, he just wanted MJ to own her shit.

And that’s our episode. So, do you think MJ and Reza are on the path back to friendship? Will Nema get over his childhood issues? And is Sara the most boring addition to Shahs?