Welcome back to the season finale of Life After Lockup — let’s get started, shall we?

It’s finally the morning of the wedding and all seems to be forgiven after the dirty strip joint drama. Just in case though, Angela pays the groom a visit to make sure no one else had slept over in his hotel room.

Angela admits that she overreacted and Tony implicitly denies that he cheated on Angela at his bachelor party. He did admit he “got a handful of a** though.” Gross.

Angela’s sister, Donna Faye, makes one last attempt to save her, telling her that she still has time to call off the wedding. Unfortunately, Angela won’t hear anything of the sort. Later Donna Faye suggests that maybe she and Tommy should team up together to stop the wedding.

Speaking of Tommy, he admits that he can’t believe that Angela and Tony are really getting married but says he’s done everything he can to stop it. He is adamant however that he knows that what he has with Angela isn’t over. YIKES.

Angela finally makes her long walk down the sandy beach aisle and the two exchange their personal vows to one another. In his vows, Tony promises to be trustworthy. Now, just keep that little nugget in your back pocket. 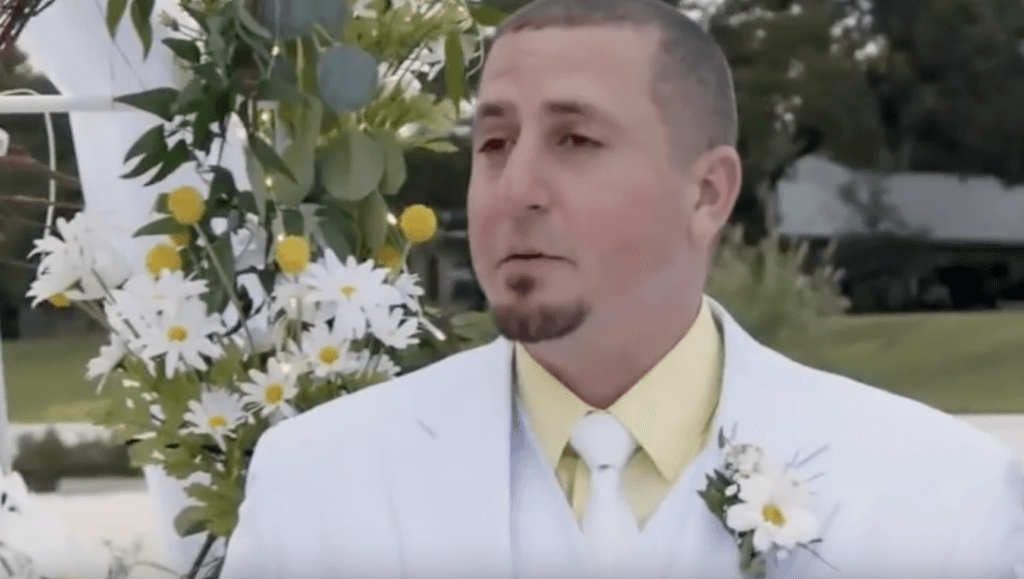 Meanwhile, Angela promises to love Tony even if life’s circumstances separate them physically, but quickly explains that doesn’t give him permission to go back to jail. Insert forehead slap here. 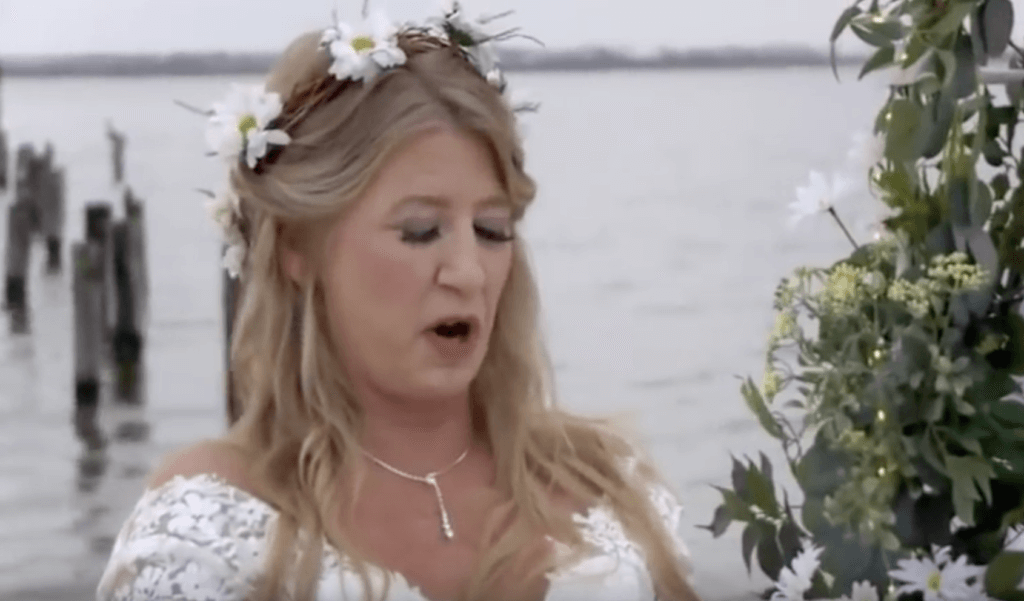 Later in her talking head interview, Angela revels in the fact that she and Tony are now married and takes a moment to address all of the “Strippers, b******, prostitutes and Insta hoes” warning them that Tony is now all hers.

Fast forward to a mere 48 hours later, Angela has stolen Tony’s SIM card out of his phone and found inappropriate text messages with the tricks back at the motel. Sorry Angela, hate to break it to you, but a leopard doesn’t change its spots. Luckily, Angela hasn’t filed the marriage certificate and now she doesn’t need to. She changes all of the locks on the doors and vows that she is done with Tony once and for all. We can only hope!

Andrea Edwards and Lamar Jackson sit the kids down over pizza and explain that they are having a vote to determine whether they will stay in Utah or move to Los Angeles. Nyla confesses in her talking head interview that she thinks that making the children vote is very immature on Andrea and Lamar’s part because they are leaning on them to make the difficult decision. Girl, you are wise beyond your years. 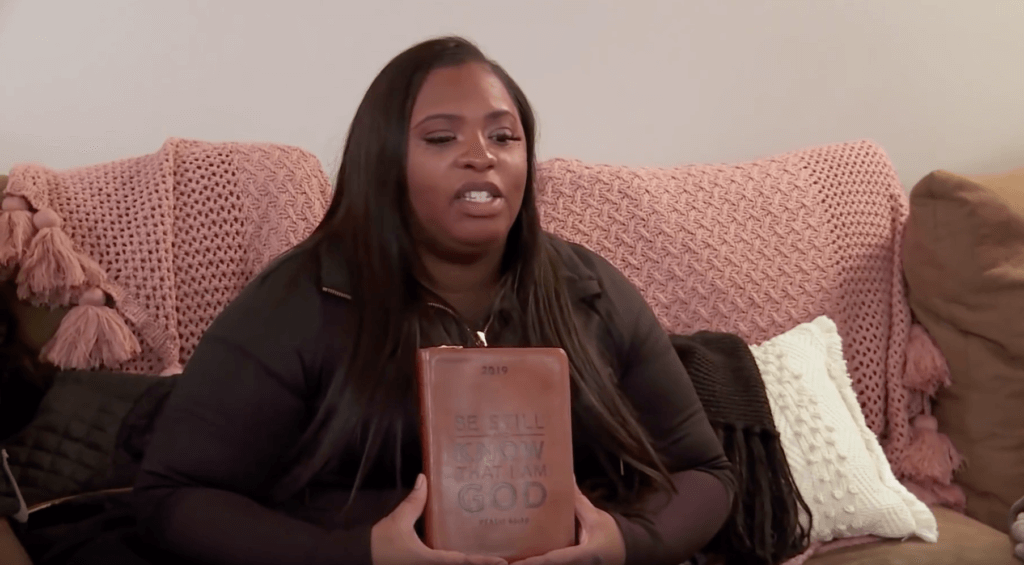 Andrea Edwards and Lamar Jackson plead their cases just one last time before they vote. Lamar makes the comment that he’s still in school so that’s why he needs to stay in LA. LOL okay, but so are the three CHILDREN, you fool. Of course, Andrea just screams over and over about drive-by shootings, gangs and drugs. This chick has watched way too much TV.

Ultimately, Los Angeles wins with a 3-2 vote. Cue the waterworks for Andrea. She eventually comes around to the idea and says that maybe she will feel differently and safer this time around. She says that she is willing to give it a year. Besides, she plans to be pregnant 9 out of those 12 months anyway. UMM EXCUSE ME, WHAT?! 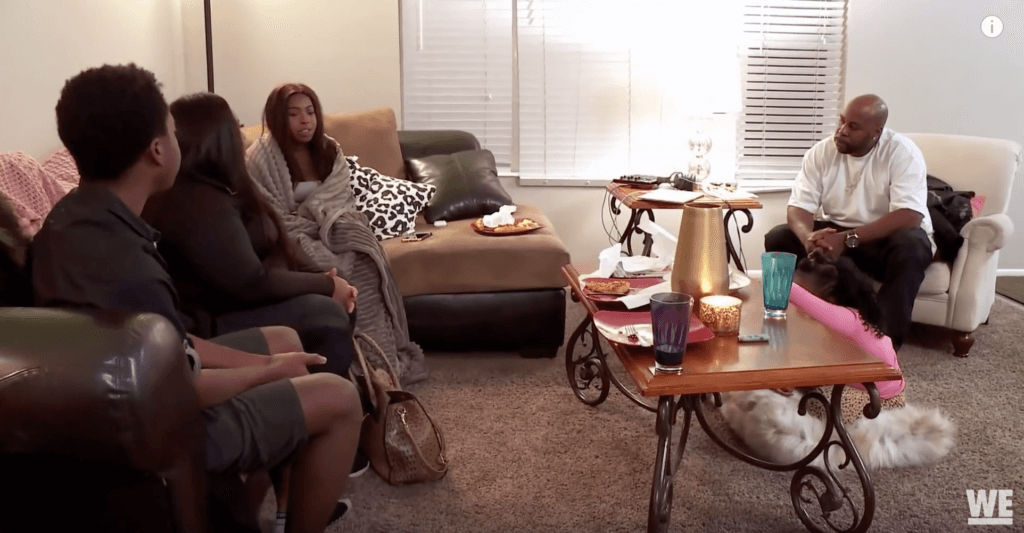 She finally decides to allow Lamar back in there marital bed BUT FIRST-she makes him take an at-home sperm count test. Lucky for Lamar, he passes the test. Time to get down to business.

An all-out brawl is about to pop off when Lacey Whitlow attempts to kick Shane Whitlow out of the house. One thing Shane certainly didn’t plan on was John Slater being out in the driveway waiting on him. Shane makes a run for it back in the house but John follows him in.

Shane starts throwing his belongings in multiple garbage bags while screaming at Lacey that there’ll be no going back after this. Shane makes an offhanded comment about how fast John got out of jail and then accused him of “snitching.” He then takes it one step further stating he’s more a man than John will ever be and tells him to “go sell some more drugs.” John says that Shane can say whatever he wants about his past but Shane points out, it’s not the past because he JUST did it. Good point, Shane. 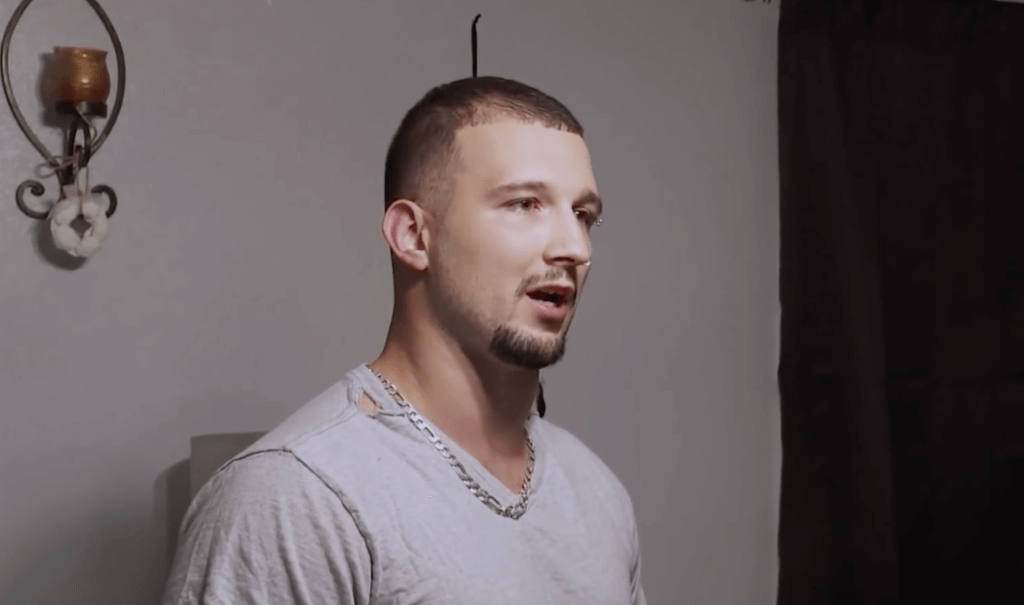 Shane and John Slater square up and security is called in to keep the two from killing each other.

Later, Shane waits on the doorstep for a ride to the nearest hotel with all of his belongings in tow while inside John has Lacey up on the kitchen counter. John later confesses he has every intention of asking Lacey to marry him… again. SMDH.

Michael Simmons flies out to see Megan “do her thang in the studio.” He admits he hasn’t spoken to Megan in quite some time citing his new relationship with Maria as being the reason.

He finally breaks the news to Megan that he is in a relationship with Maria and as expected Megan doesn’t take it so well. She demands to know how long he has been seeing her and he is adamant that he wasn’t seeing her when he came out to meet her friends and family in Texas. In the words of Maury Povitch, “the lie detector test determined that was a LIE.”

Megan asks Michael if he is in love with Maria and he says yes. Psh. Please. He doesn’t even know what love means. Michael says that he would still like to have Megan as a close friend but she shuts that down-quick. Sorry Shady Boots, you can’t have your cake and eat it too.

Back in Miami, Michael and Maria take a romantic stroll on the beach and he confesses that he has zero plans of telling Maria he went to see Megan. Old habits die hard, I guess. 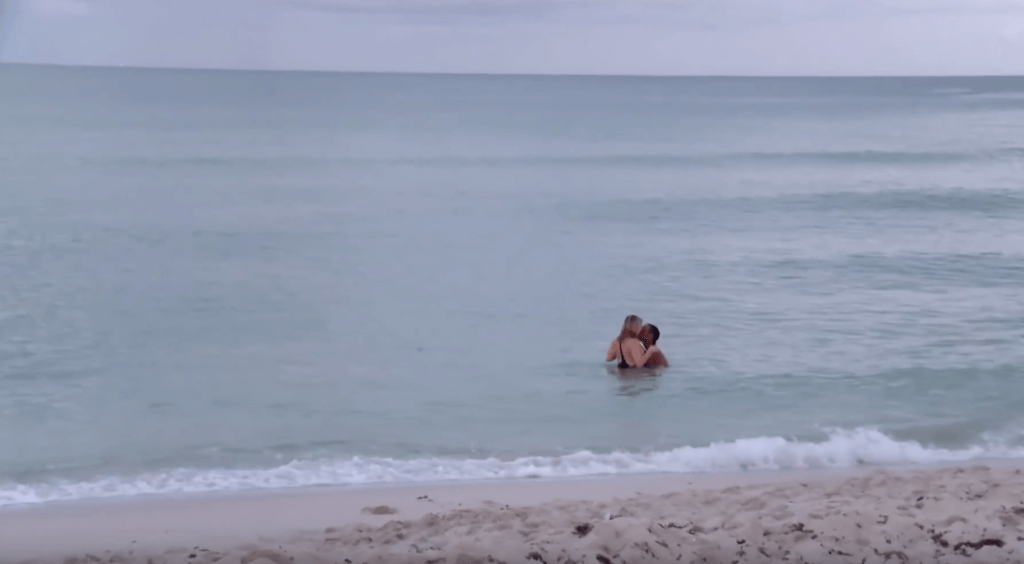 Meanwhile, in upstate New York, Sarah Simmons finally comes to the realization that she is a single mother and cannot count on Michael to co-parent with her. 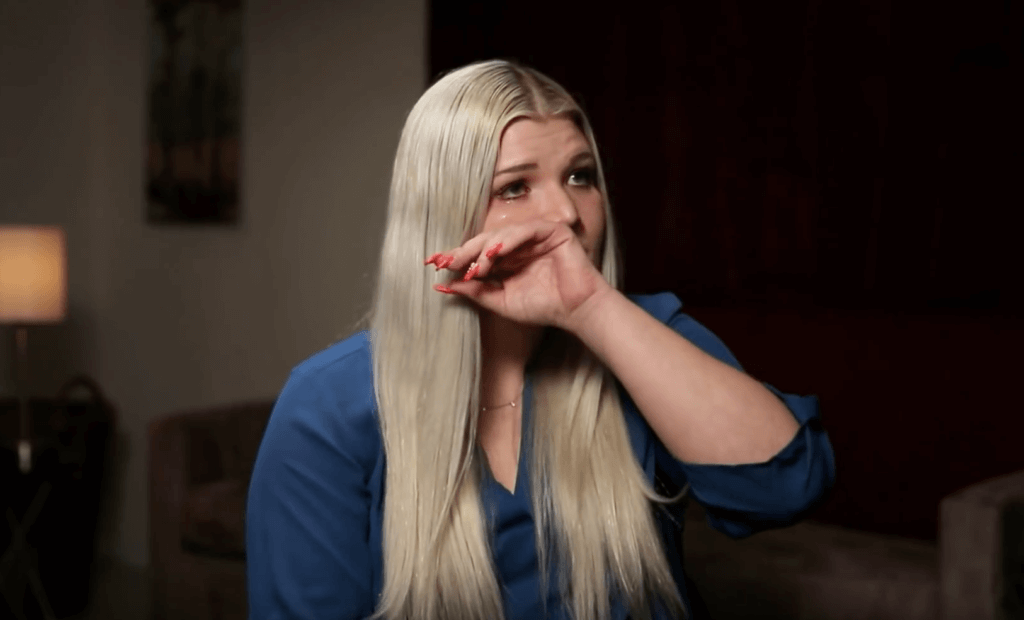 Cut to Sarah taking a pregnancy test in the bathroom… OH MY LANTA. 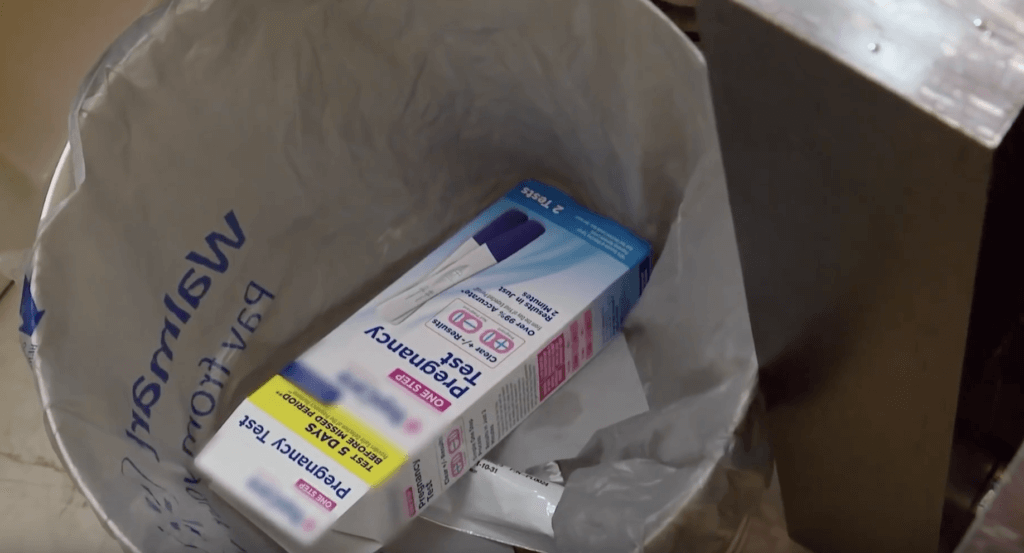 Brittany Santiago gets some disappointing news when the judge denies her request to try and find her two children who were given up for adoption years earlier. Marcelino Santiago tries to remain positive stating that as the children get older they will most likely be curious to know who their biological mother is and may want to find her themselves. 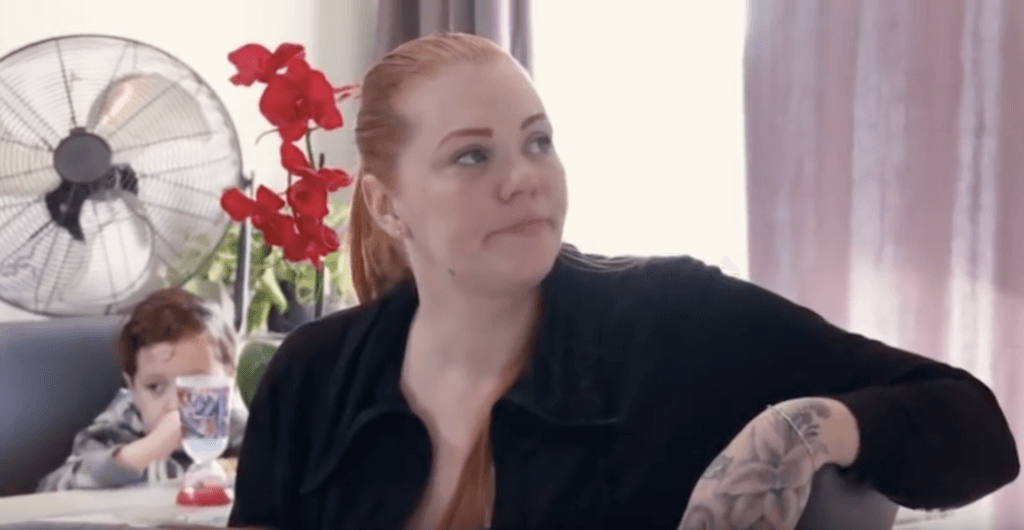 A few days later the couple hosts a gender reveal party to find out the sex of their new baby. Marcelino and big brother Giovanni get their wish for a boy when blue confetti sprays out of the poppers.

Marcelino Santiago relishes in the idea of having a son that looks like him but quickly notes that they are definitely not having any more kids stating “the factory is closed.” Meanwhile, Brittany just giggles. Good luck, buddy.

Clint Brady and Tracie Wagaman set out bright and early for Tracie’s new rehab. On the drive there, Clint’s mother Alice calls with nothing but encouraging and uplifting words of support for Tracie. I think I speak for us all when I say the world doesn’t deserve that sweet woman.

On the way there, Clint Brady reminds Tracie Wagaman that rehab is not forever and once she gets out it will be a clean slate and a good life for both of them. Tracie checks into the rehabilitation facility and stays… for a whole 24 hours.

In the rolling credits, we do learn that Tracie eventually returns to rehab and completes a 45-day program. Good for her! Sending prayers and positive vibes her way!

Thanks for tuning in and following along our Life After Lockup recaps. WHEW! It’s been a doozie…