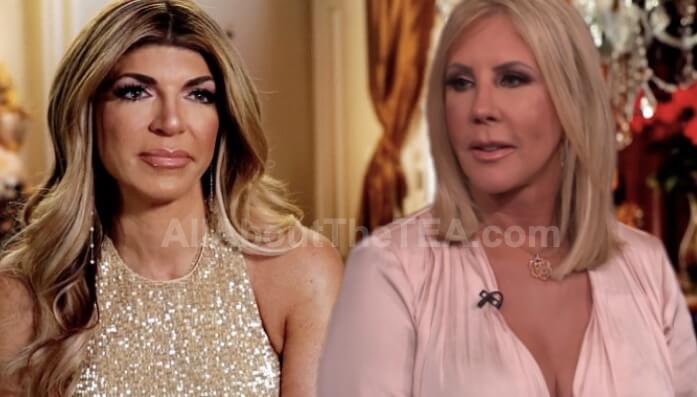 Vicki Gunvalson has exited the Real Housewives of Orange County spotlight — but continues to throw shade on her new podcast, “Whoop It Up with Vicki.”

The finance pro weighed in on Teresa Giudice’s criminal history — and revealed how she really felt about the reality star’s culpability for the crimes that sent her to federal prison.

Fans know that Teresa largely blames her year long prison stint on her husband, Joe Giudice. Joe was recently deported, after completing his own 41 month long federal prison sentence. Teresa and Joe entered a guilty plea to multiple counts of fraud, after striking a deal with federal prosecutors, in 2014.

Andy asked Vicki Gunvalson to weigh in on Teresa’s legal run-ins — and Vicki nailed it.

“What was your reaction to the whole Teresa thing?” Andy asked.

“It’s hard for me, because I am a steward of money and I don’t lie, cheat or steal,” Vicki responded. “So for me, I think there’s a lot I don’t know about it, and I think she knew more than what she’s leading on to. She had to have…she’s not an idiot, right?”

Vicki Gunvalson added that she could teach Teresa Giudice “some things” about money management, and paying taxes.

Give “Whoop It Up with Vicki” a listen — and watch Part 3 of the Real Housewives of New Jersey  reunion, Wednesday night at 8 pm, ET, on Bravo.