Welcome back to an all-new episode of The Real Housewives of Atlanta! Let’s get started, shall we?

First things first- a very pregnant Eva Marcille did NOT give birth, thank goodness. Instead, she’s on a modified bed rest per Dr. Jackie of Married to Medicine. That leaves her husband, Michael  Sterling, to his own devices to take care of the other two children while she supervises from the couch and crunches roughly 27 pounds of ice. Best of luck, Michael.

Cynthia Bailey finally decides to open the email containing Mike Hill’s manuscript of his new memoir, Open Mike. Once Mike arrives she shares her concerns about him being so open and candid in the book about his salacious past, including his issues with infidelity. She uses the conversation to dig deeper and question Mike as to why he thinks he was unfaithful in his past marriages and how is he so sure that he can be faithful to her. 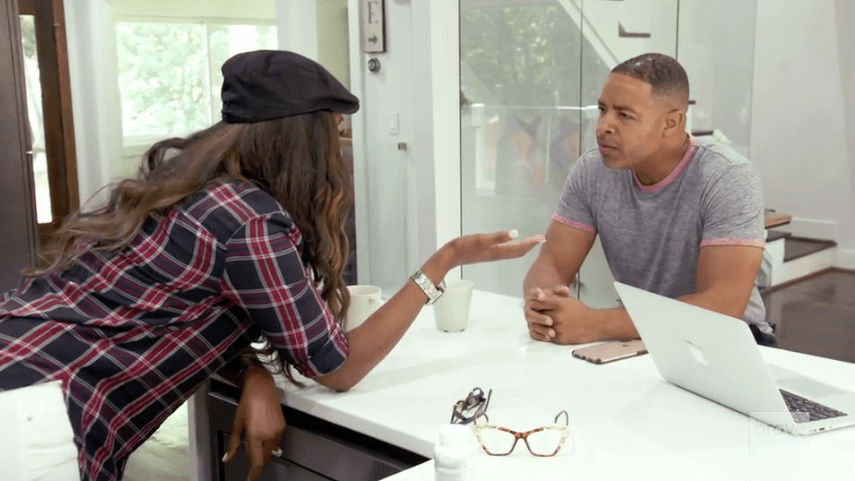 Mike beats around the bush before saying that if he were to mess up his marriage to Cynthia it would be all on him. An argument ensues when Cynthia makes the comment that cheating is the one thing she “doesn’t do” but Mike begs to differ stating that she hasn’t shown that she will but there’s no guarantee that she won’t. She adamantly denies that she won’t again and then he makes a sarcastic comment about her being “perfect” and begrudges what he perceives as judgment from her.

Tensions boil over and Cynthia Bailey mentions that they most certainly could use the help of a therapist to learn how to communicate and even argue better. According to Mike, he is an open book with nothing to hide and Cynthia agrees that he should be an open book as he has way more flaws than she does. SHOTS FIRED. CHILL eventually comes to an agreement that they both have things they need to work on and going to see a counselor is their best course of action.

The next day, all of the ladies are getting ready for the kickball event hosted by Kandi Burruss and Kenya Moore. Kandi calls Kenya and informs her that NeNe Leakes says she will not be attending since it’s part Kenya’s event. 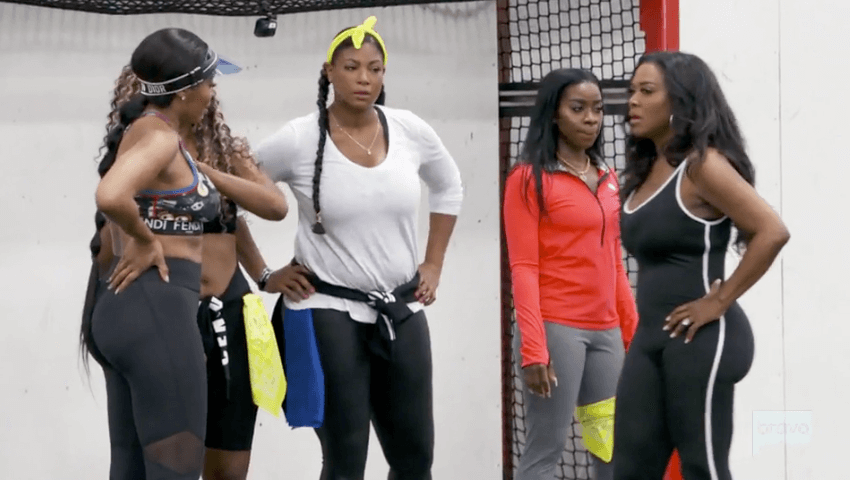 Meanwhile, at the Leakes’ residence, NeNe Leakes discusses the jungle brunch and Kenya staying for a total of seven minutes and leaving before NeNe even arrived. In a shocking turn of events, Gregg reveals that he and Kenya’s husband, Marc Daly, have been texting back and forth about Marc’s upcoming charity event.

NeNe Leakes reveals in her talking head interview that Marc invited both her and Gregg to his event and Kenya had the nerve to post about the invite on social media and tag everyone including Gregg but somehow still managed to leave her off. Gregg tries to convince NeNe to take the high road and attend Kenya’s couples night at the bowling alley and Nene reluctanly agrees, stating she’ll come…for at least seven minutes.

Kenya Moore arrives at the party first with her cousin/hired help in tow and bragging about how she picked such a perfect spot for the festivities. Insert eye roll here. Kandi and the rest of the ladies file in including pregnant Eva and her kickball stand-in. The referee goes over the rules explaining that the object of the game is for the ladies to hit each other with the ball in order to get them out. Kenya is apparently unaware of how kickball actually works and admits that she’s probably got a big ol’ target on her back. LET THE GAMES BEGIN. Next, the ladies line up and one by one Kandi and Kenya pick the ladies to be on their teams until poor Porsha Williams is picked dead last and left traumatized by it. But REAL TALK, did anyone catch the wedgie Shamea was sporting in those orange pants?? WOOF.

Team Hurricanes puts up a hard fight but in the end, it is Team Twirl that takes home the W. Kenya takes a couple of victory laps around the losing team while chanting “losers.” Such a class act that Kenya.

Kenya Moore and Kandi thank the group for coming and then catches them all off guard when they announce a group trip they’ve planned to Athens, Greece. Eve brings up the fact that not everyone is in attendance and Kandi says she has plans of inviting everyone and yes that includes NeNe. Kenya seems none too pleased with that little nugget of information.

After baby Brooklyn’s swim class, Kenya and Marc discuss their evening plans of meeting up for couples’ bowling night. The event was planned as a way for Marc to get to know everyone prior to his charity event. Kenya, however, makes it clear she has no desire for him to invite the Leakes’. 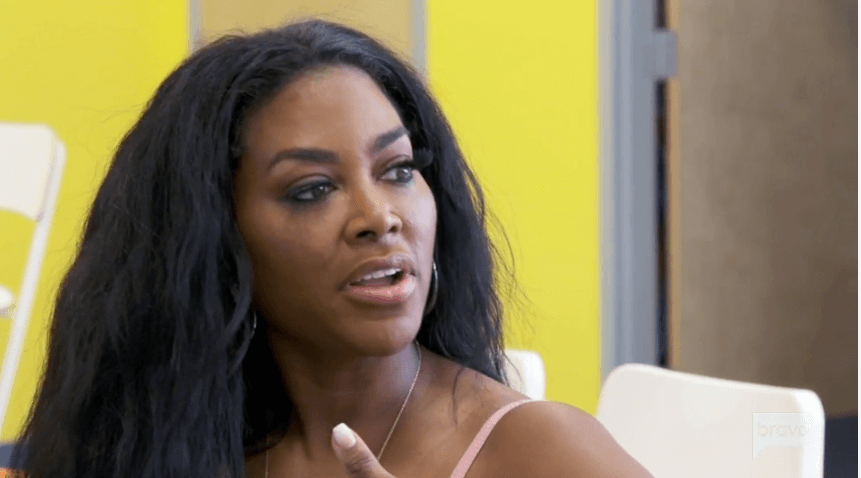 Unfortunately, Marc’s mind is made up stating that they will get an invite, regardless of Kenya’s feelings. 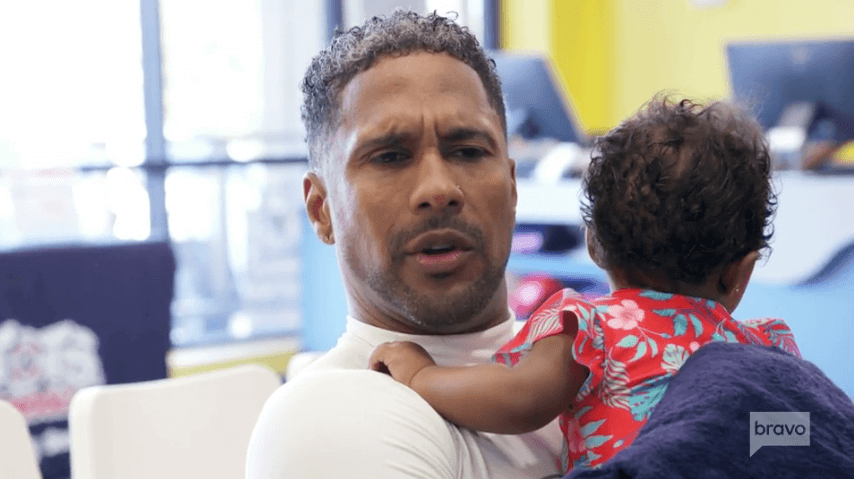 Once they arrive at the bowling alley, Kenya awkwardly implies that because this is technically a date night they could sneak back in the house before Brooklyn is even aware and make “sexy time.” Gross. Eva Marcille arrives and everyone goes back and forth as to whether or not she should be allowed to play. Someone, please get Dr. Jackie on the phone STAT so she can explain once again what “bed rest” means.

The couples start to play but Porsha Williams exclaims that not everyone is there yet and demands to know where NeNe, Marlo and Tanya Sam are at. Kenya simply says they were never invited in the first place. According to Kenya she only disinvited Tanya once she said Paul couldn’t come strictly because it was a couples’ event. 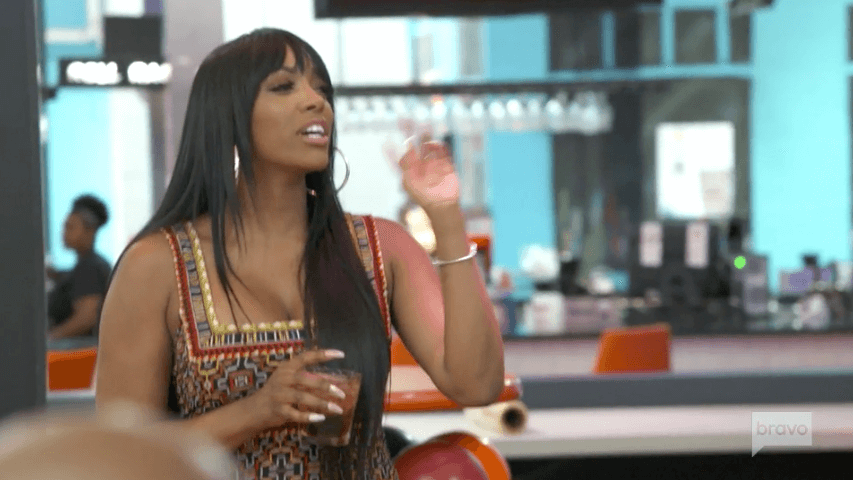 Marc Daly, however, throws Kenya right under a big fat bus, stating that he never said that the bowling event had to be a couples thing. Later Marc takes it a step further telling Kandi that he implicitly told Kenya to invite everyone regardless if their significant other could make it or not. 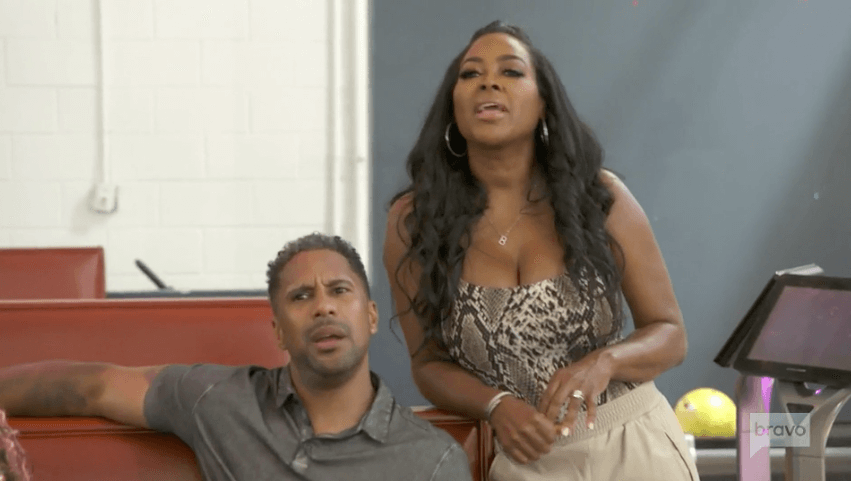 Porsha, Eva, Cynthia and Kandi have a side conversation regarding how Marc shut Kenya ALL the way down about disinviting Tanya. Cynthia remarked, “Marc don’t play.” Porsha agrees, stating that she feels Kenya “falls back” when it comes to Marc.

Kenya Moore interrupts the gabfest asking what the ladies are talking about. Porsha seizes the moment to call Kenya out for disinviting Tanya and for also calling her a C-U-next-Tuesday weeks prior. As one can expect Kenya doesn’t take the lecture from Porsha so well but it doesn’t take long before the two are back to playfully twerking and trash-talking each other over a game of bowling. All’s well that ends well I suppose. 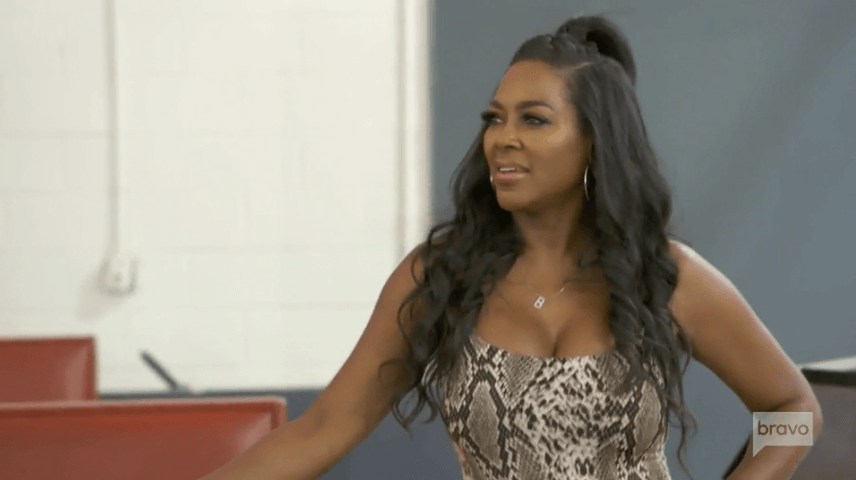 Marc Daly wraps up the evening addressing the group about his charity event to mentor young black men. He asks Dennis McKinley if he is willing to speak at the event and Dennis agrees. He says that everyone has been invited and that he really wants everyone to set their differences aside and “focus on the cause.” Kandi asks if Gregg will be there and without hesitation, Marc says he will. Kandi tells Kenya that if Gregg is invited, Kenya should do the right thing and reach out to NeNe and invite her. Kenya isn’t budging though and says that if Marc wants NeNe there then he can reach out to her. She then goes on to say that Gregg was only invited because Marc wanted him there and Marc abruptly interrupts Kenya telling her to “reign it in.” Okay, Daddy Marc. 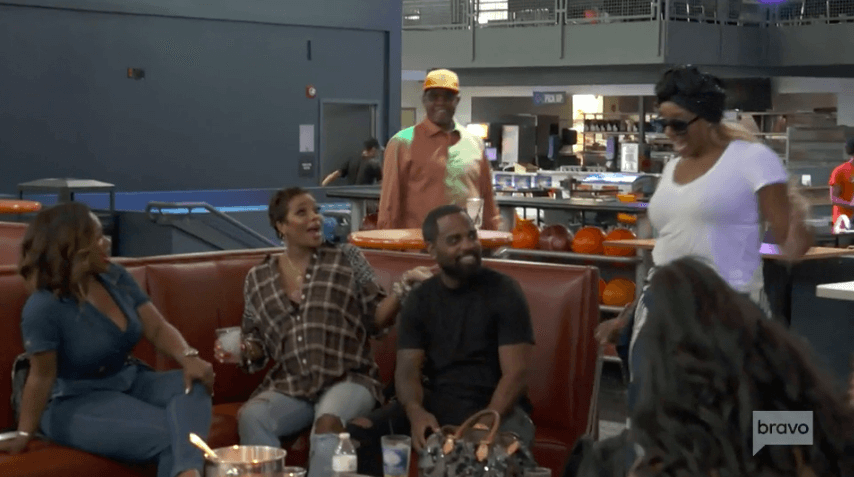 But just when things start to wind down NeNe and Gregg ENTER THE MF’N BUILDING and Kenya looks like she just got caught wearing one of Marlo’s wigs. NeNe walks in all smiles and even tries to greet and hug Kenya who swerves so hard her neck looks like it might snap.

Marc Daly and Gregg talk amongst themselves and Gregg mentions that he’s in a bit of a dilemma in regards to the event as his wife was not invited. Marc assures him that NeNe is most certainly invited and that he would never try to divide a couple. He also says they all need to shelve any nonsense before Tuesday in order to focus on the charity. He even tells them that Kenya agrees and she pipes in and says that she does but probably just out of fear that if she didn’t she’d get a big fat whooping when she gets home. 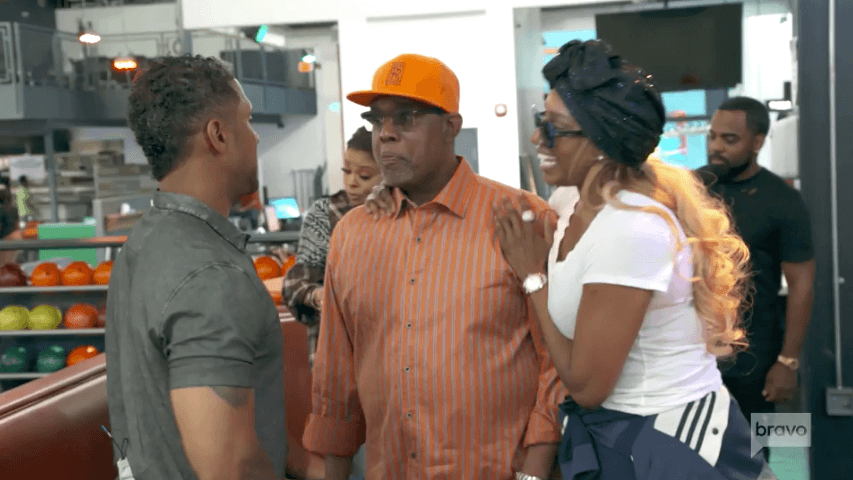 Will Marc Daly be able to pull off a drama free charity event or will World War III ensue? Tune in next week to find out!