Drama exploded during the February 19 episode of Real Housewives of New Jersey after Danielle Staub revealed Teresa Giudice instructed her to pull Margaret Josephs hair earlier in the season.

After the revelation was confirmed by footage, Margaret Josephs reacted to finding out that Teresa Giudice actually encouraged Danielle to assault her on Twitter. She wrote, “Well that was crazy…. I guess it wasn’t a knee jerk reaction, it was after the fact and premeditated.”

Twitter was swift to respond to Margaret Josephs’ reaction — encouraging the Real Housewives of New Jersey star to dump Teresa Giudice as a friend. 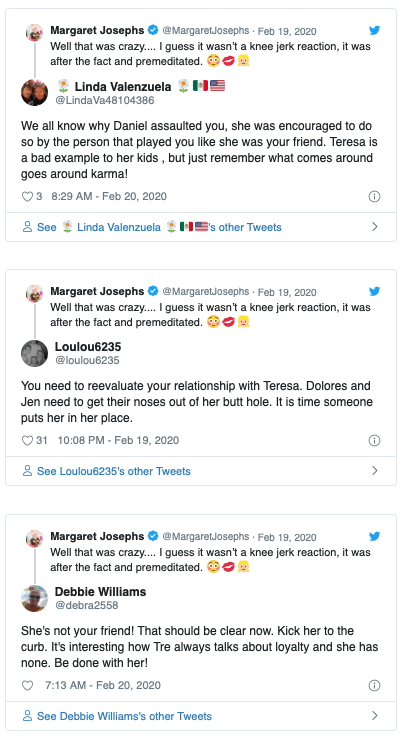 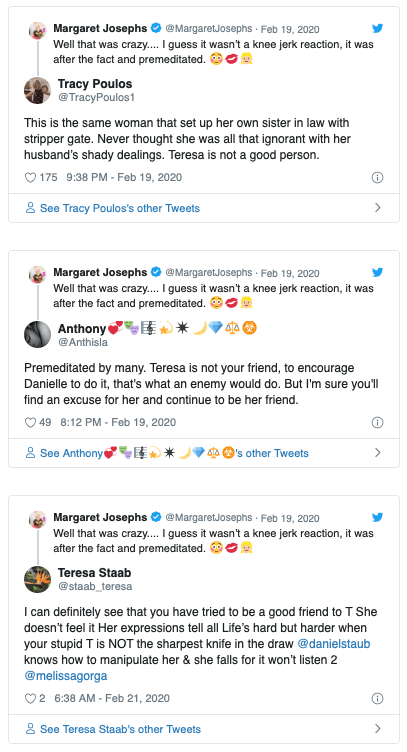 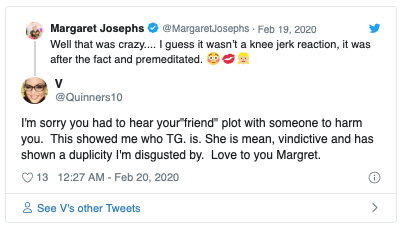 Jennifer Aydin also chimed in on the drama during a recent appearance on Watch What Happens Live —  and she’s team Teresa Giudice.

“I felt bad for Teresa, honestly,” Jennifer said in the Clubhouse, where it was confirmed she hadn’t seen the footage of Teresa and Danielle talking about it until the episode aired. “I did because I know why she said what she said, and I know why she did it.”

Jennifer continued: “And we spoke about it at the reunion, and so I don’t really want to give anything away, but she didn’t even think it was going to be that brutal,” she said. “Which, at the end of the day, I guess you could think, ‘How could pulling someone’s hair not be that brutal?’ But she really did drag her across the room and nobody was expecting that.”