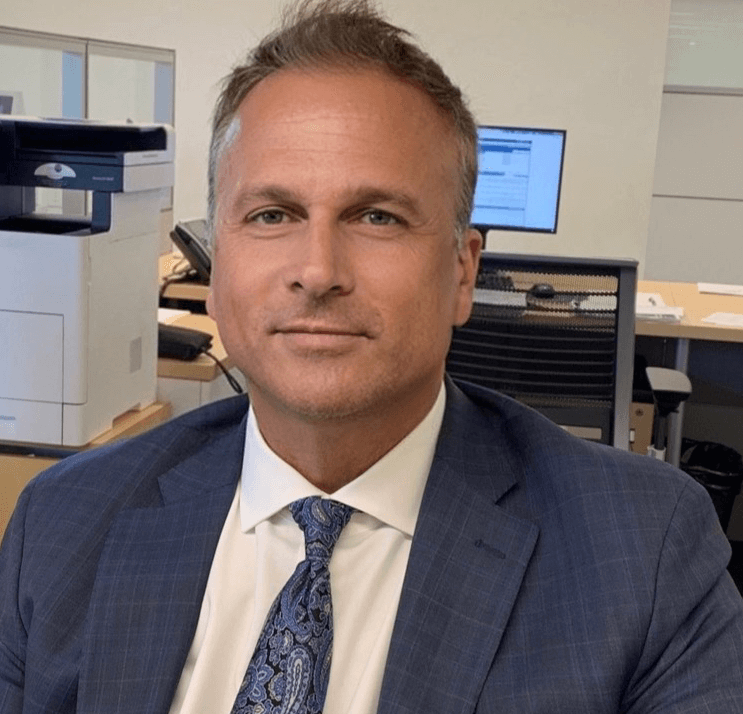 “I’m a private person, despite what my time on reality television might say,” Simon Barney told People. “But I wanted to speak before someone else does and uses their words, not mine. And to speak out about it so others can see how I’ve taken this fight on with optimism, and the good this has ultimately brought my life.”

Simon Barney said that he first noticed last May that he had swollen salivary glands. An ultrasound and biopsy found other affected areas, and he was eventually diagnosed with throat cancer. A follow-up appointment revealed that the cancer had spread to his lymph nodes, tonsils and throat.

He said the cancer had spread so much that doctors dismissed surgery as a treatment option. He began to undergo chemotherapy and radiation treatments in January. The intensive treatments gave him side effects like difficulty eating, swelling and bleeding in his throat, “constant buzzing in his ear” and “slight” hair loss.

“I have hope,” Barney told the outlet. “Doctors have said I’m doing really well so far. They look at me and they go, ‘Man, you don’t look like you’re going through chemo.’ So that’s good, the prognosis is good.”

Tamra Judge and Simon Barney have three children together and were married 13 years before divorcing in 2011. He told their children — aged 21, 19 and 14 — about his diagnosis before undergoing treatment.

“It’s kind of like a new beginning for me and my family,” Barney told People. “When I told Tamra, she said she cried for like, two or three days. Things changed with our relationship from there, in a good way. We’re getting along in ways we haven’t in years. And she’s become close with my fiancée. And that shift carried across the board with my kids, too.”

“Please keep @sbarney855 and our family in your prayers,” she wrote, alongside a screenshot of the People article. “It’s been a very emotional 4 months and we are rallying together as a family to get through this.” 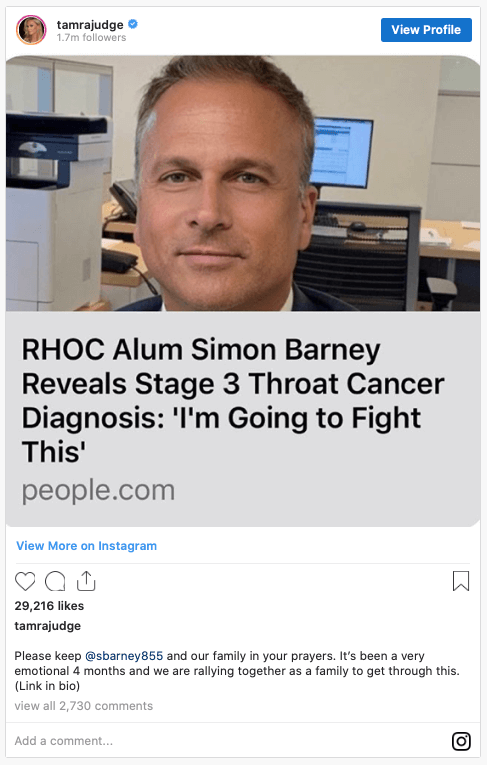 “He told me the news and we both literally started crying,” Tamra Judge told People. “I just couldn’t believe it. My first thought was, ‘I don’t want to take my kids to their dad’s funeral,’ and immediately, any ill feelings between the two of us just vanished. At the end of the day, none of that matters. All we have to do is rally together to make it through this.”

“It’s kind of like a new beginning for me and my family. It’s really brought everyone closer together,” Barney says. “When I told Tamra, she said she cried for like, two or three days. Things changed with our relationship from there, in a good way. We’re getting along in ways we haven’t in years. And she’s become close with my fiancée. And that shift carried across the board with my kids, too.”

“That’s what I’ve always wanted,’ he continues. “My fiancée, the same thing, she’s always wanted that with my ex-wife, for the kids. The kids would prefer it if we all got along. And they see that now, and it’s had such a powerful effect.”

Doctors have placed Simon Barney on an aggressive treatment schedule, doubling up with radiation and chemotherapy at the same time. His chemotherapy is every 3 weeks, while his radiation is every day — 5 days a week — for a total of 7 weeks.

“The process is the real bad part,” Barney explains. “It basically attacks all of your organs. You’re like poisoned. It’s been killing me. If I had a choice, I probably wouldn’t have done chemo and radiation at the same time, but that’s what they recommended. It’s like hitting your head with a hammer and pouring gas on yourself. I was ready to end it the other day, the symptoms were so bad. It’s almost worst than the cancer.”

“You go in Monday, you get the chemo. By Friday, Saturday, Sunday, all the steroids are wearing off that they give you, and it really hits you,” he says. “I just curl up in a ball for the whole weekend in my bed, and then pray that the truck gets off me. Because I was run over by one.”
“Then they give you a shot that’s supposed to help your white blood cells multiply, and that hurts your bones, so you feel like you can’t walk,” he adds. “And then the radiation, basically they hit me in my neck, my throat, and the tonsil area. It’s like a 9 out of 10 pain. It’s a lot of pain.”
Simon Barney, during a 2018 trip to Paris

“You have an appetite but you can’t eat anything because your taste buds are gone, or they taste and smell like chemo — this metallic, disgusting taste and smell,” he says. “My throat is swollen and bleeding which makes it difficult to swallow even water.”

He’s experienced other side effects as well, including constant buzzing in his ear and slight hair loss. But surprisingly, what hasn’t gone is Barney’s positive outlook on life. “I have hope,” Barney says. “Doctors have said I’m doing really well so far. They look at me and they go, ‘Man, you don’t look like you’re going through chemo.’ So that’s good, the prognosis is good.”

“I’m a huge optimist, the glass is always half full, not half empty. And I’ve always been that way, the cancer just enhanced it,” Barney says. “I’m kind of a jokester. And everyone in my life has been so supportive and offered to drive me to treatments and take care of me, but my whole motto is, ‘Don’t treat me like a cancer patient because that’s not how I want to be treated.’ So I stay strong and don’t let this take me down. Because if your attitude sucks — if you start believing, ‘Oh my God, cancer’s a death sentence’ — then you’re done.”

“I think, if you had to pick out of from all my family, I was the right person to get it,” he continues. “I can survive this, at least mentally.”
And if he can’t physically survive it? Well, Barney’s thought that through too.

Simon Barney is currently engaged to Catushia Ienni, his fiancée of nine years.