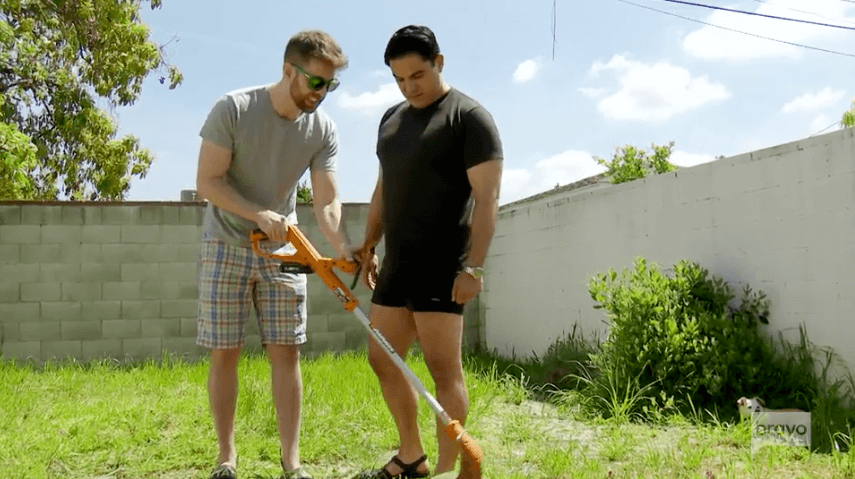 While they argue over the weed whacker, Reza tells us that his relationship with Adam is going well (which always means trouble in the Bravo-verse). They’ve finally finished their house and are now planning a housewarming party. MJ (Mercedes Javid) is thirty-five weeks pregnant and may not come. Nevertheless, she and husband, Tommy, make the guest list. Mike Shouhed and Mona Vand are also invited. Golnesa “GG” Gharachedaghi  — not so much. Though she and Adam are in contact with each other, Reza hasn’t spoken to GG in months.

Last season, Reza, Mike, and MJ told GG’s ex, Shalom, all sorts of tea. As a result, he threatened to sue her. But Reza relents and decides to invite GG, because Adam has a say in this party, too.

Golnesa “GG” Gharachedaghi feels that her friends have been conspiring against her and taking Shalom’s side. But she misses Destiney Rose. And she would consider making nice with Reza for Adam’s sake. She and Adam are super close. As she sits with her friend, Yasmin, she complains about the rest of the cast. Yasmin encourages GG to mend all her relationships. Her karma needs to be in a good place because she wants to get pregnant soon.

GG has five embryos on ice and she’s willing to take the parental plunge solo. Sure, she’ll have to stop smoking pot, but only for nine months, right? And she’s not preggers yet, so bring on the weed! We see video of GG injecting herself with hormones in preparation for pregnancy. And Yasmin brings over herbs to burn for good luck. Unfortunately, it sets off the smoke alarm. So, maybe she’ll just stick to good karma for now.

Destiney Rose is out at a farmer’s market and meets up with Mike. She tries ginseng infused honey That’s supposed to boost the sex drive. Mike assures us that he doesn’t need help in the sexual department. His dating life is on point, and he’s proven it by dating his first Jewish Persian girl, Paulina. She’s twenty-eight (although why he needs to share her age with us, I’m not sure) and according to Mike, she’s the love of his life. But let’s wait five minutes and see if it sticks.

Mike Shouhed called Destiney a few days ago and asked for cooking advice. Although Paulina has been vegan, she wants to make him happy. And since he’s a meat and potatoes kind of guy, that’s what he cooks, all the while assuring us that he treats her like a queen. In fact, Mike says if we ask his girlfriends from fifteen years ago what they think about him, they all still love him. Because he knows how to treat women. Sure, he may have cheated on his wife and talked down to her all the time, but that’s because he wasn’t in the right relationship.

Destiney calls him a ho, and he gives her the same label — because she’s on Tinder. Mike tells her that Tinder isn’t a place for people who want monogamy. But Destiney is looking for Mr. Right. She tells us that dating in LA is practically impossible, and she takes pains not to show too much flesh in her pics. So much for the ho label.

Reza and Adam are puttering in the garden. Adam recently found butterfly eggs and put them in an incubator. Which brings us to the burning question: does Adam still want to have a baby with Reza? Nope. Since Reza brought up divorce last season, and seeing how he gets stressed when things don’t go his way, Adam’s baby fever has cooled considerably. Instead, he now tends his plants. 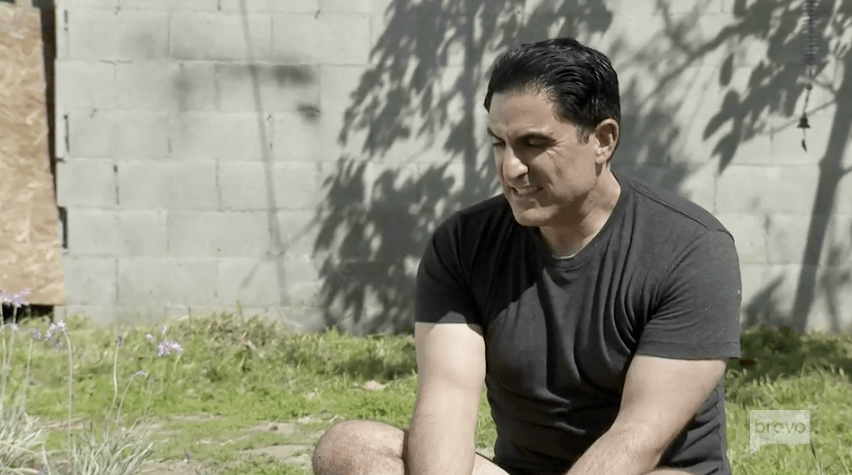 Reza Farahan meets for drinks with Nema Vand. Nema has a new set of pearly white veneers and is sporting a gold chain. According to Reza, that ups his Persian points. And Reza isn’t the only one who’s lost weight. Since breaking up with his girlfriend, Erica, Nema’s taken his grooming to the next level.

They discuss Mike’s new girl. She’s got money — mostly from her ex-husband. And two kids. All that alimony and child support is enticing. But Mike tells us he’s no longer partying and hanging out with his friends. At forty, he’s finally ready to settle down.

He cooks a vegan dinner for Paulina. He feeds her pasta and grabs her ass as they make dinner together. They say “I love you, baby” about a million times in three minutes. She’s everything he always wanted in a woman. Paulina wasn’t looking for a serious relationship, and she doesn’t like cheaters, but Mike has been so honest with her, she was bowled over. Plus, he adores her kids. But all that love talk kind of flounders when Paulina tells him she’s ready to get married—like next year. Mike isn’t in a hurry. Things will happen when they happen.

GG heads across town to meet Destiney. She orders a ton of apps before Destiney arrives. The hormones are making her ravenous. In fact, she looks over at another table where strangers are eating cauliflower and says she wants to try a piece, and they let her. Finally, Destiney shows up and the waiter brings a mountain of food to the table. Destiney is feeling all those nasty carbs and orders a salad instead. GG has been MIA for months, and Destiney wonders why GG has been keeping a low profile. GG popped off on Destiney at the reunion, when Destiney was only trying to empathize with her volatile friend. 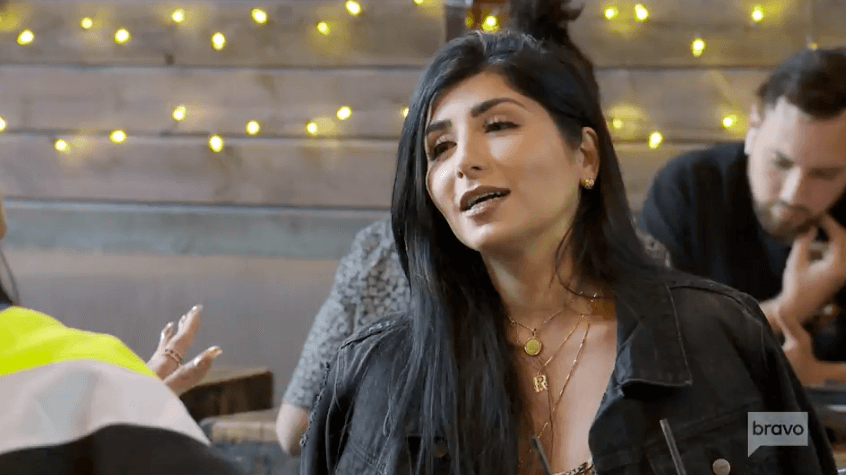 GG wonders if that’s why Destiney cooled their friendship. When Destiney gets a little passionate about being on the receiving end of GG’s temper, GG tells her to stop yelling. Then GG immediately flies off the handle and starts wagging her finger in Destiney’s face. Sure, it may have taken GG months to apologize, but she’s doing it now, and that should be good enough.  We see a montage of GG’s bad behavior over the years, and even though Destiney points out all the times GG’s gone batshit on people, GG denies it. She backs away from the table and declares that she’s done! It’s over! She accuses Destiney of lying about GG raising a hand to her bestie, Yasmin. She’s never! But once GG leaves and smokes a little weed, she’s calm enough to come back and resume her seat. She doesn’t want to fight with Destiney any longer. Destiney says they need to take it day by day. They hold hands and GG apologizes again, but says she was hurt by Destiney’s cutting her off. In the end, they make up. 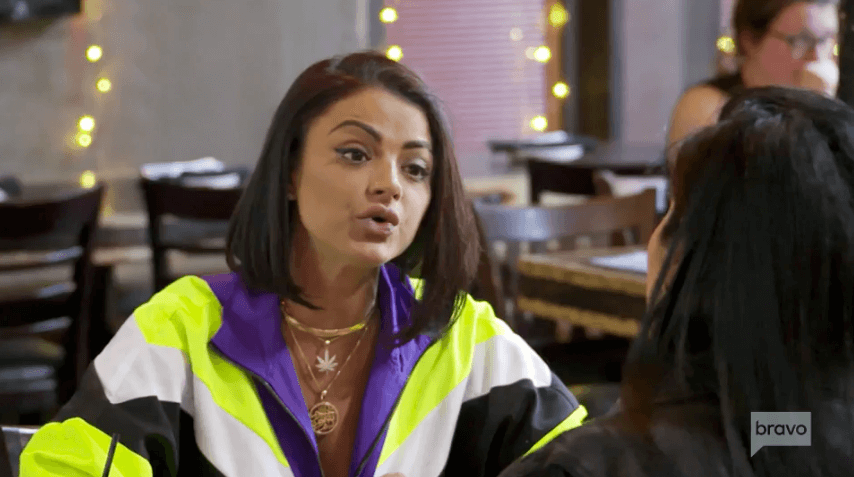 The housewarming party at Reza Farahan and Adam’s new place is underway. Reza is neurotic about making sure the house is perfect. Adam does his best to fulfill Reza’s expectations, but he’ll never live up to those exacting standards.

The backyard is decorated to perfection — mainly because Kevin Lee planned the party. Destiney is the first to arrive. She makes a signature cocktail for the event called a Shirazi martini. Adam thinks it’s too tart, but Reza will love it.

Destiney has dirt of her own on Adam. Her friend, Ali, has been receiving all sorts of dick pics and sext messages from Adam, to the point of feeling sexually harassed. Uh oh! Should she tell Reza? Should she say something to Adam? What’s a Persian girl to do?

When Reza comes outside, he tries to kiss Adam, but Adam keeps turning away. Destiney sense problems in this suburban paradise. 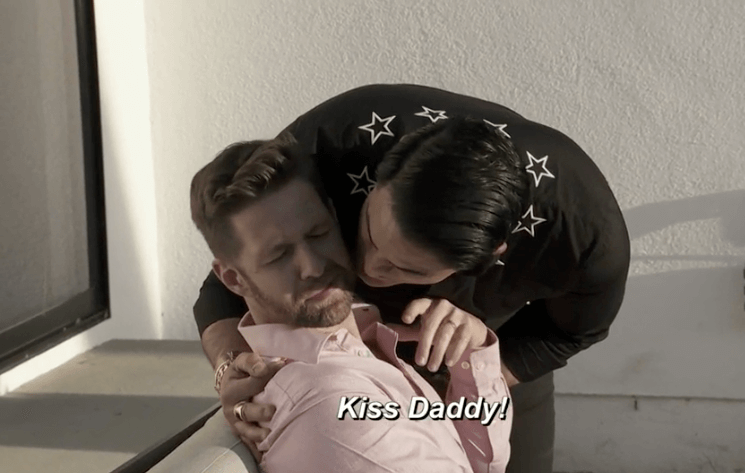 Shervin Roohparvar and Mona Vanda make an appearance. Nema, her brother, wonders if they might be dating. But Mona remains cagey about her personal life.

Reza’s friend, Sara, pops in. She’s Persian and drives a Mercedes and has an MBA. She doesn’t have many Persian friends though, so Reza wants to hook her up with his crew. (Good luck, girl!)

Mike and Paulina make an appearance. Mike sent a monster floral arrangement ahead of time, but it came without a card. Reza greets Paulina. He totally approves of her — mainly because she dresses well and wears lots of gold.

Finally, GG shows up. She’s decked out in designer white and lots accessories. She gives Reza two ceramic hands filled with succulents as a gift. Reza and GG act like they never had a falling out. She immediately hugs Adam, but when she sees Shervin, she makes a U-turn and tries to leave. Mike and Reza talk to her about staying, but she complains that Shervin is getting into the CBD business. And everyone knows that she has her own CBD company. What a freaking copycat!

Reza asks Mike to leave so he can talk to GG alone. He begs her to stay and says he loves her. He’d be hurt if she leaves. He wants her in his life, and they agree to put the past behind them. They’re so much alike, that’s why they fight so hard. Ultimately, GG decides to stay.

Inside, Mike is looking over his ridiculously huge floral arrangement. Outside, Paulina tells the boys she can’t wait to marry Mike. His friends are a little surprised that Mike is willing to commit, considering his dick has wandered in the past. 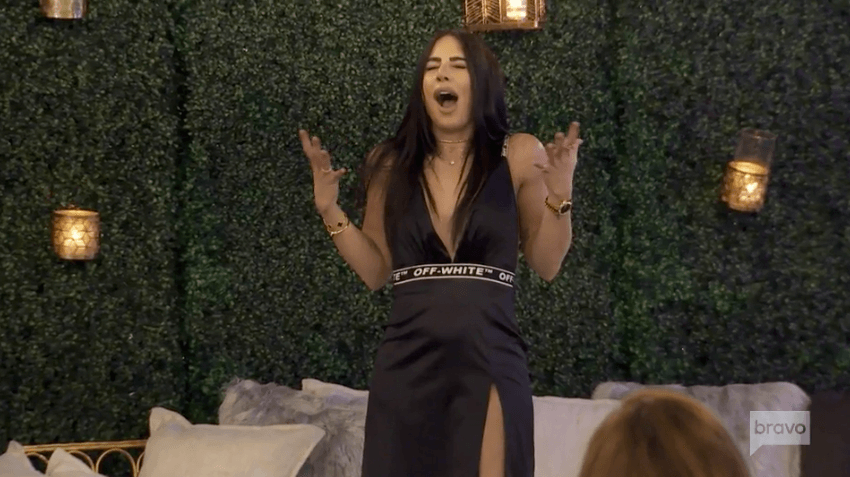 GG and Nema talk at the bar. She hates his new teeth. They’re like glow in the dark Chicklets. The sexual tension they once shared is over.

Reza declares that everyone must play charades. While Shervin acts out “booty call” Destiney slips into the kitchen (where Mike is still inspecting the flowers he sent) and says she wants to tell Reza that Adam has been sexting her friend. And that’s not all. When Reza went out of town, Adam played strip Jinga with other men. Gasp!!

Mike and Destiney talk to Reza together. Mike drops the tea on Adam. Naked. Jinga. People. Reza will get to the bottom of it. Destiney tells him to talk to MJ. MJ knows everything! 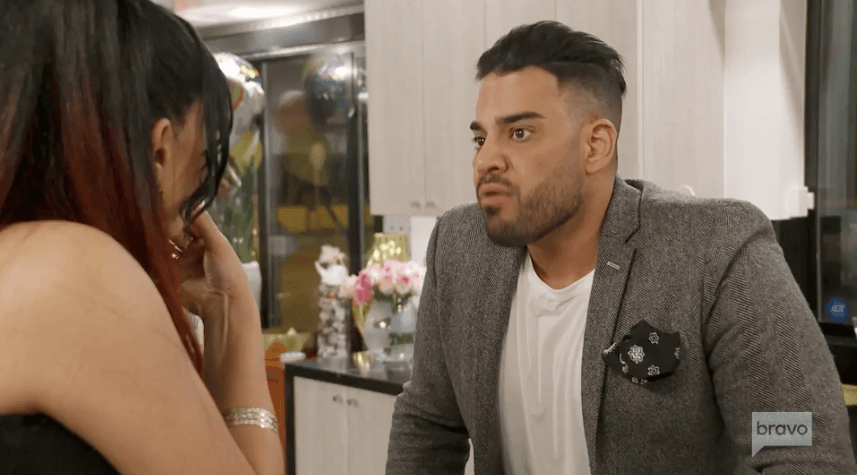 After everyone leaves, Reza sits on a sofa in the backyard, hugging a pillow. Destiney feels guilty about throwing Adam under the bus, but Reza has assured her that he always wants to know the gossip. 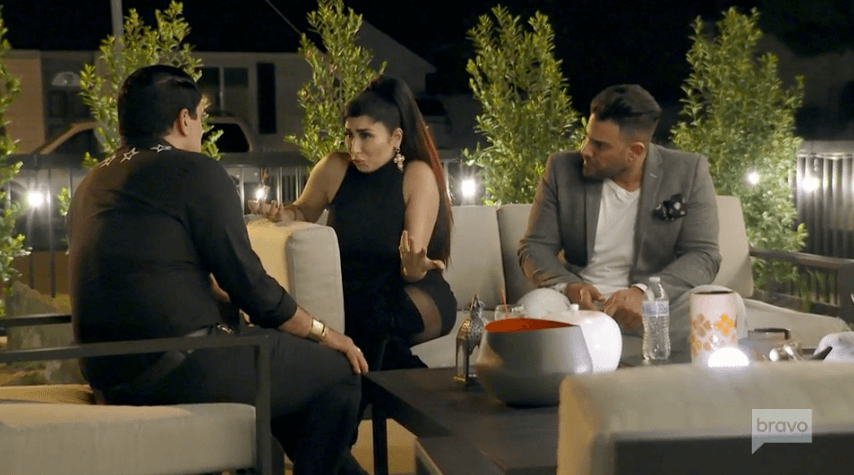 When Reza asks Adam if he’s been playing strip Jinga with other dudes, Adam starts to sob. 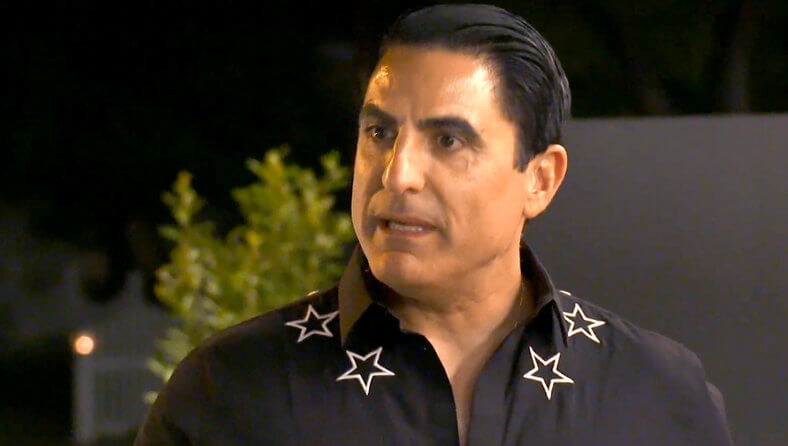 And that ends our episode. So, are you surprised that Adam has been sexting other men behind Reza Farahan’s back? Did you miss MJ in this episode? And is GG ready for a baby?