Welp! We’re still on vacay in the Hamptons on the Real Housewives of New Jersey, and things are going to hell as the women hit an outdoor café for lunch.

You’ll remember that the ladies barely sat down before they started hurling insults at one another. Jennifer Aydin found out that Jackie Goldschneider had family money. And boy, was Jen hot when she realized that with all that money, Jackie served pizza and cake at her kids’ birthday party. What is she, stingy or something? Then Melissa Gorga pointed out that all the women spending money were the stupid ones. That by saving, Jackie was setting her kids up thirty years down the road. But Jennifer heard things a bit differently. She thought Melissa was saying that as adults, Jen’s kids would all be losers. And then she started throwing silverware and plates at Melissa. 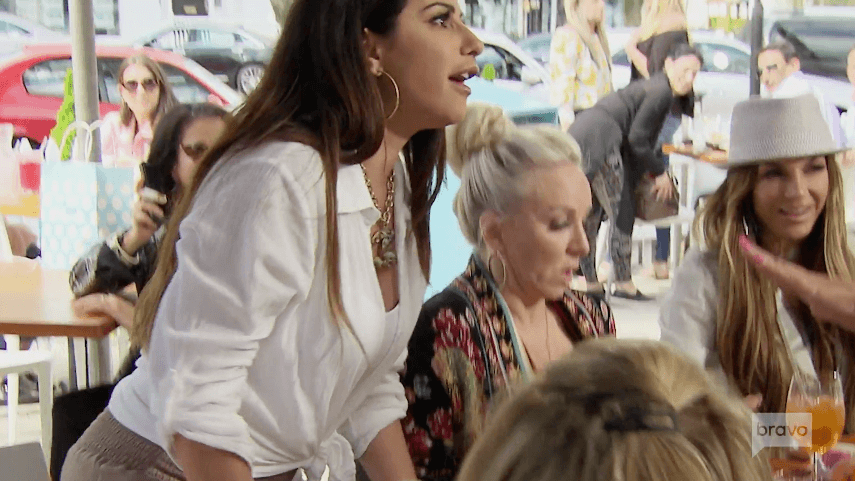 Which brings us back to the start of the show.

Melissa Gorga jumps up and tells Jen to walk away. Dolores Catania tells Margaret Josephs to separate the two women. Teresa Giudice, Dolores, and Jen get into one car to drive back to Jackie’s Hampton home. 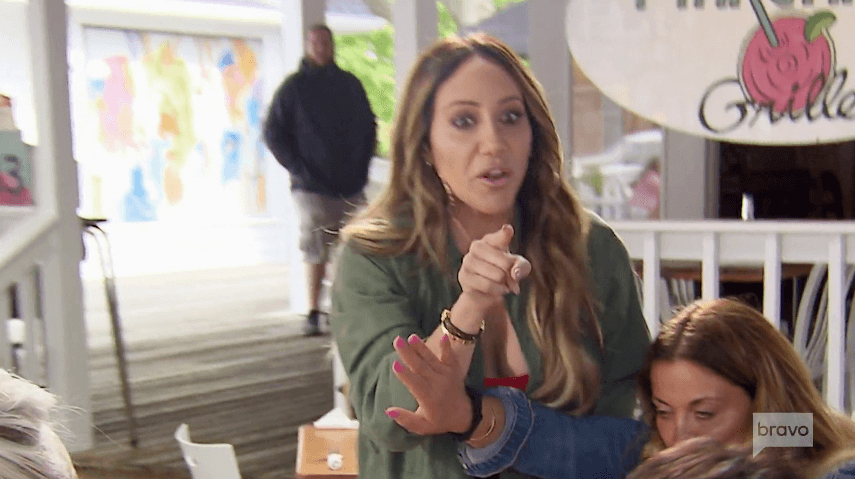 Still at the restaurant, Margaret can’t understand why Teresa always sides with the person causing trouble. Melissa points out the if Marge had hurled a plate at Teresa, and Melissa ran after her leaving Teresa on her own, all hell would break lose. But let’s face it, this is Teresa’s playground and they’re supposed to be grateful she let’s them play in her sandbox. Instead of wrapping up Teresa’s salad and taking it home, Melissa bequeaths the lettuce to Jackie. Which brings us back to Jackie’s eating disorder. Marge says Jackie doesn’t eat. Melissa points out that Jackie is super cautious about what she puts in her mouth. Jackie tears up as she discusses her disorder. 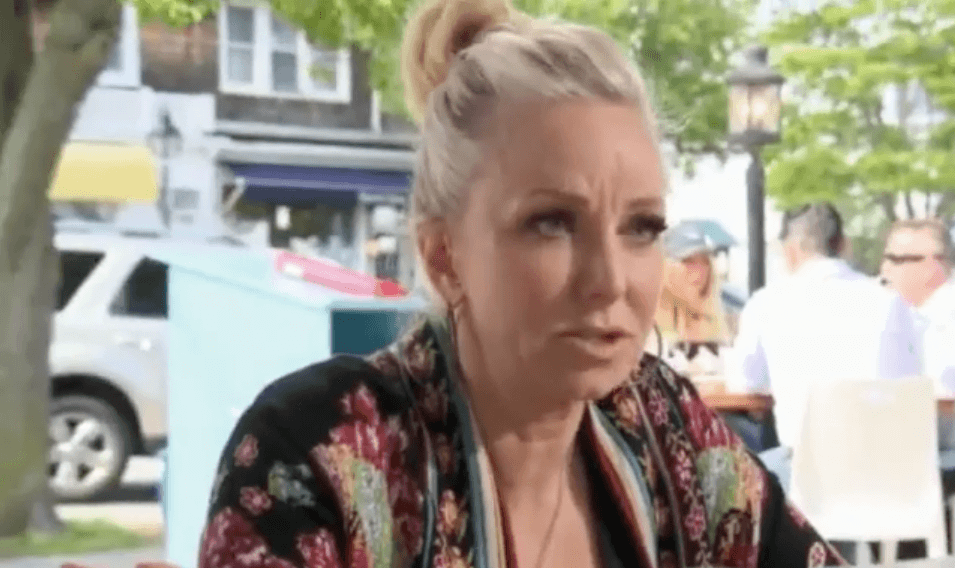 Jackie put herself in treatment. After she went to an inclusive resort in Mexico, where the staff refused to alter the food for her preferences, she realized how serious her problem really was. Her food issues were so out of control, she took thirty cans of tuna to Mexico with her. When she got home and stepped on the scale, she had a come to Jesus moment, realizing that if she didn’t get help, she was going to die. So, food is still a very touchy issue with her. 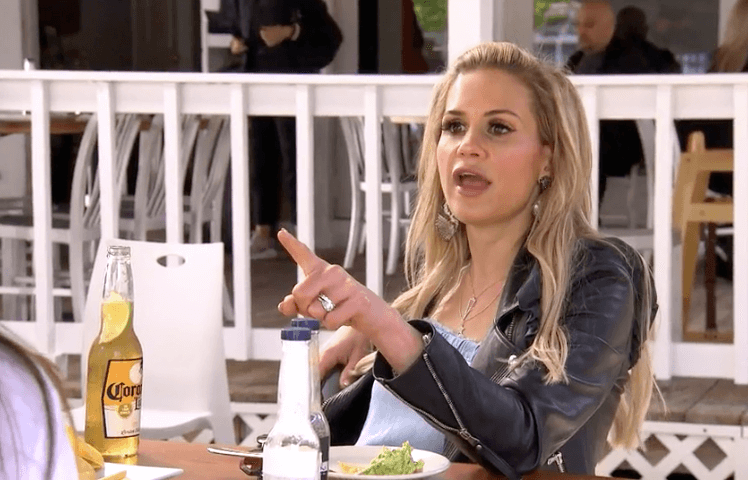 Marge apologizes and says she didn’t understand how serious the matter really is. When people discuss her eating or lack of it, it brings her back to that low place. She says Jen triggers her, but Marge sets the record straight. Jen may call Jackie cheap and stingy, but she never remarks on her food intake.

Back at the house, Teresa Giudice, Dolores, and Jen head outside to the pool. Jen wonders how the conversation at lunch turned left so quickly. Dolores points out that if Jen said Dolores’s party sucked, she’d have something to say. But Jen just digs in further. How can someone with so much money be so skimpy with toward their kids? Dolores insists Jen isn’t coming from a bad place. Jen is simply trying to help Jackie’s reputation. All the adults will come away from Jackie’s party talking shit if she doesn’t step it up. Jen’s looking out for her friend: spend more, get judged less.

Dolores is still pissed that Melissa called the rest of the women losers (including herself, by the way). Melissa has no idea what Dolores has saved up for her children’s inheritance. She should mind her own damn bee’s wax!

Jen is no longer comfortable staying in the Hamptons. Dolores and Teresa pledge to leave with her. They came together, so they’ll head back to Jersey together.

Dolores calls her ex, Frank, and discusses the fight. She tells him she may be coming home early. He has disturbing news of his own. Little Frankie has turned the house into a sex den. He’s got two or three girls with him at all times. Little Frankie is a fuck boy, y’all!

Melissa, Jackie, and Marge return home. Melissa walks in and says, “Oh, you hoes.” Dolores immediately snaps at Melissa for calling her and the rest of the women losers. Melissa restates that if Jackie isn’t splurging on dumb stuff like elaborate birthday parties for her pre-teen children, she comes out ahead, because Jackie’s a saver. Whatever. Dolores is still mad. Now, Jen comes into the room. Melissa wants to know why Jen always has to throw shit at the table? Um, to get your attention, Melissa. Obvs! 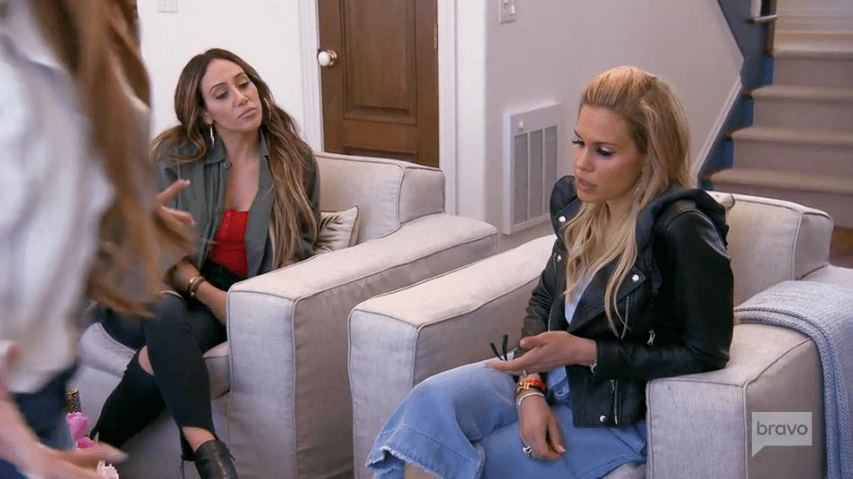 Teresa has her own issues with Melissa. According to Mel, when Teresa speaks without a filter, she sounds ignorant. I might argue that everything Teresa says is ignorant, but hey, this isn’t my show. Anyhoodle, Jen sides with Teresa, which puts Melsissa on the defensive. Do not try and get in between these two, Jen. It won’t end well for you.

Jen finally makes a valid point when she reminds Jackie that she wrote a blog about Jennifer’s extravagance and how she gave her kids everything they wanted. Wasn’t Jackie judging Jen in that instance? So, if Jen wants to view Jackie as cheap, she’s allowed, right?

Jackie and Jen keep arguing about kids’ parties. Finally, Jackie comes to the realization that she and Jen won’t be friends. It’s just too exhausting. Jen agrees and flounces off, saying she won’t stay at the Hamptons. 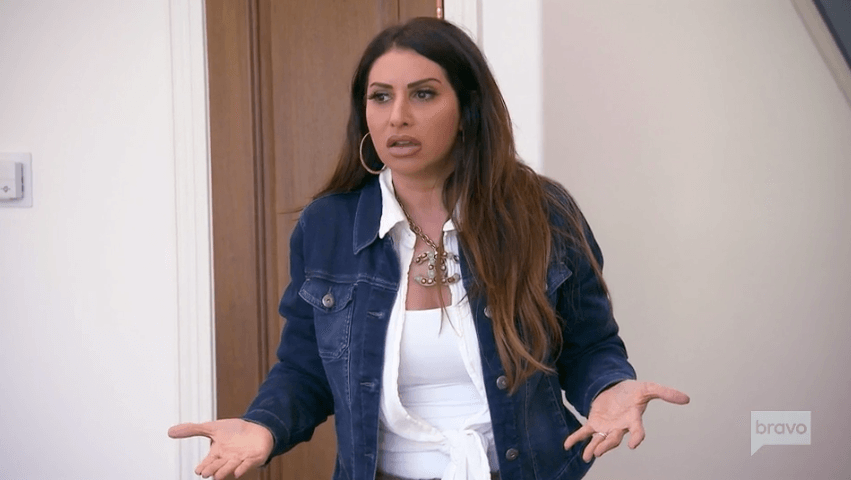 Dolores urges Teresa to go talk some sense into Jen. But instead, Jen gets in the first strike by saying Melissa called Teresa “embarrassing”. Teresa immediately marches out to the living room to confront Melissa. 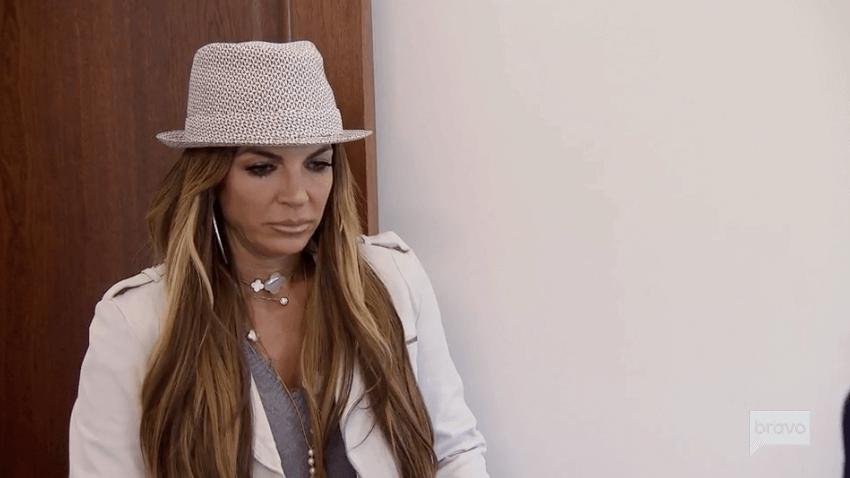 Melissa denies saying it. She doesn’t like Jen butting into their family dynamic. When Melissa tells Jen to shut the fuck up, I think she speaks for all of us. Teresa demands an apology from Melissa for calling her ignorant. Melissa promptly gives her one, then Teresa mutters, “Thank you. I love you.”

Melissa and Jackie encourage Teresa not to leave. But Dolores is determined to go. After Melissa pressures her, Teresa finally decides to stay. 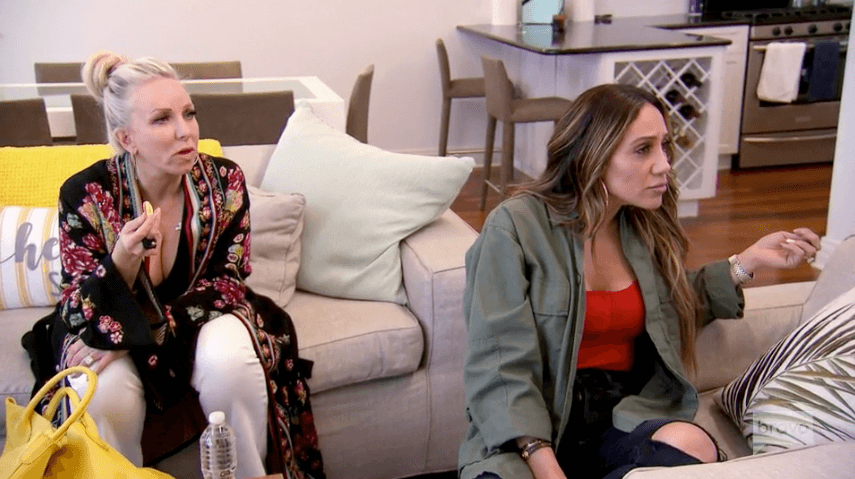 Back in Jersey, Joe Gorga meets up with Joe B., Marge’s husband, for drinks. Joe tries to set their waitress up with Frank Sr. He’s single. She’s cute. They’d be perfect together, right? Um, no. The waitress is dating someone, and the guys question whether Frank can even get an erection after pumping so much iron. When Frank arrives, he assures them his manhood is still working. Whew! Thank goodness. I was really worried there for a second. But when he orders an apple martini, it gives the guys something else to mock.

The guys start discussing the women’s fight in the Hamptons. Did they hear the news? Jackie is loaded and she forced Evan to sign a prenup. How humiliating for Evan. Frank, Joe, and Joe B. are too manly to sign such a document.

Back in the Hamptons, the survivors head out to dinner at Dockers, and the maître d’ could not be more bored with their Housewife status. Teresa thanks Jackie for inviting her to the beach house. Though Jackie didn’t achieve her nice, fun weekend with all the ladies, she’s glad that the three women stayed.

Teresa checks out the cute bartender. Jackie says Evan will introduce her to someone nice. But Teresa might have eyes for her pool boy, Tony. They’ve known each other since their school days, and he’s giving her a massive discount on her new pool, so… Teresa denies that they’ve had sex, even though he’s cute and likes to send her semi-nude selfies.

Does Teresa feel she has to stay with Juicy Joe? What if he does get to come home? Will the marriage remain intact? Teresa is still unsure, and the women are all impressed with her strength and resilience.

Marge loves Teresa, despite their falling out. Teresa says she still cares about Marge, and she promises to keep her apart from Danielle Staub in the future. Good enough!

Once the women are back home, Marge’s dog keeps peeing on the floor. In Paramus, Jen’s kids want to dye their hair for field day. Dolores is doing squats on a balance ball. When Frank teases her, Dolores makes him give it a try. He fails!

Melissa and Joe head to the gym. Joe grunts in appreciation as he watches her do squats. Of course, they start talking about Jen’s irrational behavior. Why does Teresa side with the crazies? Joe thinks it’s because Teresa is going through a hard time, and anyone who gives her a tiny bit of attention, she gloms onto. And speaking of crazies, why isn’t Juicy sucking up to his wife for holding things down at home? Melissa thinks Teresa is over Juicy, that she’ll never get back with him again.

Over at Marge’s house, she’s expecting Marge Sr. for a drink. Even though it’s been a rough year, with a failed lawsuit and a lien against her business, Marge is preparing to launch a McBeth jewelry line. So, where is Marge Sr. during all these milestones? She’s MIA. 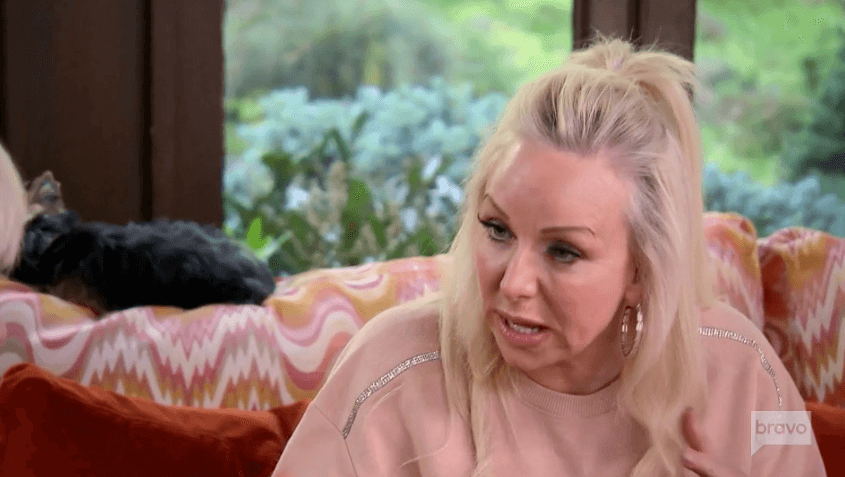 Margaret fortifies herself with a fruity alcoholic drink. She usually sticks with cola, but she needs something stronger to deal with Marge Sr. Margaret says that she’s tired of acting like the mother in their relationship. She’s been going through a lot, and Marge Sr. hasn’t been supportive. Doesn’t she have anything left to give to Margaret? Marge Sr. tears up and promises she’ll try to be more present in Marge’s life. 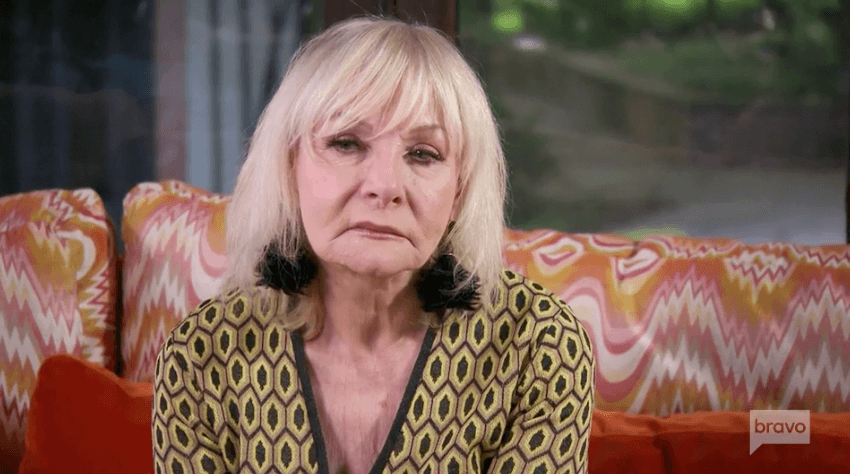 Next, Teresa meets her brother, Joe, at Rails. Because what would Jersey be without a scene at Rails? Nothing, I tell you! They discuss the Hamptons trip, and Joe brings up the fact that Juicy likes to call Teresa and talk shit to her. According to Juicy, she has so much baggage, no other man would ever want her. Joe thinks Juicy should be kissing Teresa’s ass.

Teresa has clearance to go see her husband. Only three people are allowed to visit. She’s taking Gia and Melania. She hopes that Joe will see his girls and continue to fight to stay in the country.

On a happier note, Jackie and her brother, Eric, take the kids bowling. Eric is learning disabled, and Jackie’s best friend. She’s always been protective of him, and her kids adore their uncle. Jackie talks to Eric about their dad moving from the family home. He’s become a bit of a hoarder and the house is too big for him.

Jackie grew up as an independent child. She didn’t want to burden her parents, because they were so consumed with Eric and his problems. She’s always seen her stoicism as a sign of strength, but now she wants her dad to know what she went through as a kid.

The time to visit Juicy has arrived. Teresa’s dad, Nono, stays home with Audriana and Gabrielle. Gia, Melania, and Teresa all pile into the car for the long drive to the ICE detention center. Unfortunately, Teresa forgot her license and the kids’ birth certificates. She has to be at the facility by 9:45. What is she going to do?! 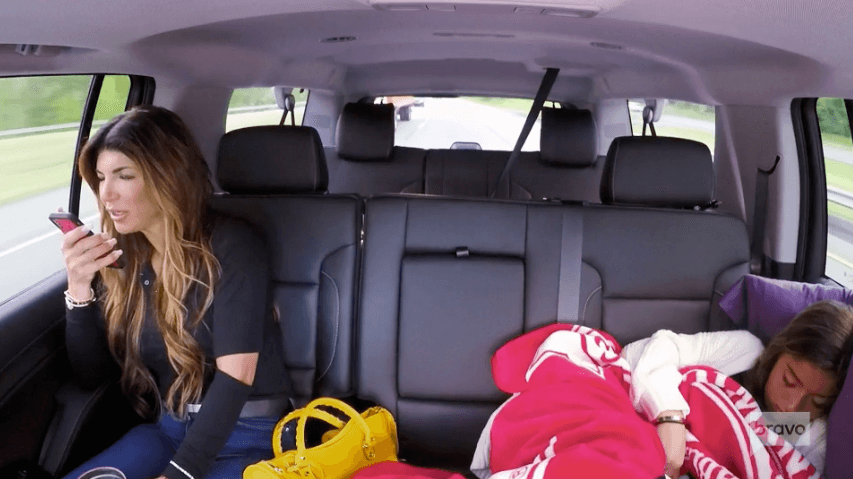 We’ll find out next week.

So, do you think Jen did the right thing by leaving Jackie’s house? Do you think Jackie is still grappling with her eating disorder?