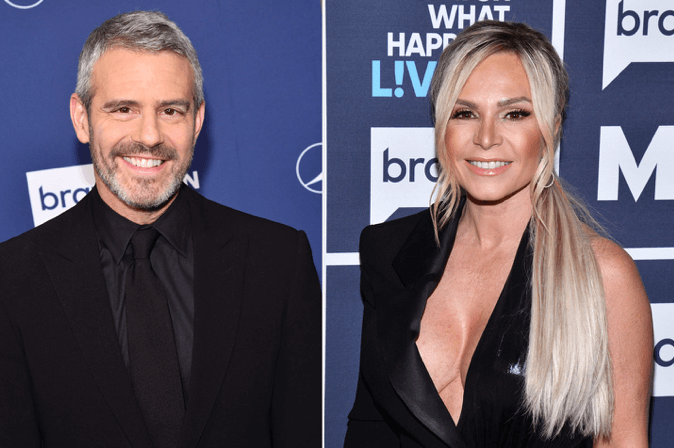 Tamra Judge did an impromptu interview with her former boss, Andy Cohen, via Instagram Live on Monday night.

As reported, The Real Housewives of Orange County star quit the Bravo reality series last week after appearing on the show for 12 seasons — even though she was offered to come back in a limited role.

Andy Cohen and Tamra Judge addressed rumors surrounding Tamra quitting, their alleged feud and why she unfollowed him (and many of her RHOC co-stars).

“I heard today you unfollowed everybody, including me,” Andy asked.

“No, I actually did that when I got the news,” Tamra replied.

Tamra Judge, 52, says she was camping when she got a call from production but was hopeful that she was going to get picked up for another reason.

“Because I knew it was going to be a sh**storm, I didn’t want to read about it. I didn’t want to see it so I unfollowed everybody. It was just my instinct,” Judge explained. “Now I’m good and I’ve accepted it.”

Tamra Judge has taken the time to grieve the loss of her 12-year job and knows she will be fine.

“I need to process it the only way I know how…. Out of sight, out of mind,” she added. “I’m going to absolutely be okay. I have a wonderful family and created two lucrative businesses. I keep reminding myself- ‘don’t cry because it’s over, smile because it happened,’ which is a quote from Dr. Seuss. Thanks to all my fans for all the love and support you’ve given to me these 12 years, and I look forward to you continuing to follow my journey.”

In a separate interview, Andy Cohen commented on Tamra unfollowing him on social media and explained that Tamra was offered a limited role in the new season.

“We had offered her three episodes to come back and kind of wrap out her story. … That is true,” Andy Cohen said when he called into Radio Andy on Sirius XM to talk about the RHOC cast shake-up. “She didn’t want to do that. Look, she’s been on the show for 12 years. We wanted to give her a send-off.”

But the Watch What Happens Live host is hopeful Tamra Judge will return to RHOC in the future.

“I’m hoping, and this is not lip service, that she will come back in some form, either this season or in the next couple,” Andy stated. “Because I just feel like she is someone that I am always interested in, I always want to check in with her on. She has been an incredible Housewife, she really has. She’s been dramatic, she’s vulnerable… she has been great.”

The Real Housewives of Orange County is set to start filming season 15 in a few weeks.