Welcome back to the mayhem that is the Real Housewives of New Jersey. Whether you take Margaret Josephs side or Danielle Staub’s, this was certainly a low point for the franchise.

We pick up from last week when Danielle Staub jerked Marge’s ponytail so hard, she bent Marge in half. Now, Teresa Giudice hustles Danielle out of the boutique. They stop along the street where Danielle calls her ex, Marty. Marty maintains that Marge wanted to break up his marriage and succeeded with her evil plans. Excuse me, but who’s been engaged over 19 times? There’s a reason those engagements didn’t culminate in marriage, and that single factor is Danielle herself. 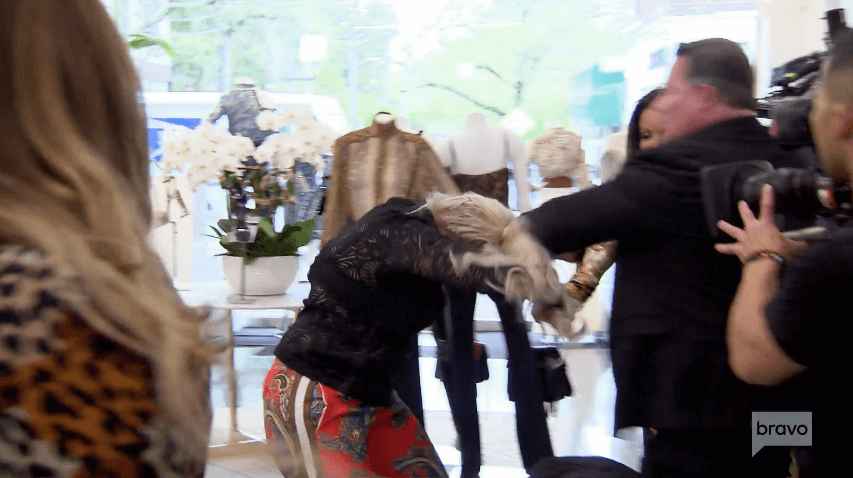 Meanwhile, Jackie Goldschneider, Jennifer Aydin, Melissa Gorga, and Marge sit in the boutique and talk about what just happened. Marge is now washing her hands of Marty. The women also discuss how scary and unpredictable Danielle can be.

Danielle Staub gets into a car to go home while Teresa heads back into the store. Though Teresa promises to “have Danielle’s back no matter what” she’s quick to ask Margaret if she’s all right. She also claims the ponytail pull happened so fast, she didn’t know what to do. But she still believes that as an old school Italian, the hair pull was fair after Margaret poured water over Danielle’s head.

Margaret Josephs defends herself by pointing out that Danielle repeatedly got into her space and pushed her. Marge had had enough and dumped her glass over Danielle. In retaliation, Danielle plunged the contents of Marge’s purse into a lit candle. Dolores Catania thinks the two women were even at that point. The hair pull was a step too far.

But Teresa Giudice points out that this isn’t the first time Marge has doused Danielle. She threw wine at her nemesis last season in Cabo. But that was last year. Even Jennifer yells at Teresa, saying she needs to wake up and see what kind of person Danielle really is.

Teresa Giudice insists she doesn’t think Danielle did the right thing, but she will continue to stick up for her friend. The other women wonder why Teresa never sticks up for Margaret. Finally, Margaret says that Teresa’s value system has become skewed. Marge leaves the store in tears.

Teresa follows her and reminds her that she pushed Marty into a pool last season. A grown man getting tossed in a pool isn’t the same as getting dragged. At least that’s Margaret’s point of view. And I happen to agree with her. These two women have been ugly with one another, but Danielle was pushing for a fight — literally — and kept getting into Marge’s face. But Teresa refuses to see Marge’s side.

Margaret gets into a car and leaves. But before she drives off, she gives Teresa an ultimatum: Danielle or Margaret. Pick one!

Marge calls her husband, Joe, and cries as she tells him what happened. Marge is not only physically hurt, but she also feels betrayed by Teresa.

Back inside the shop, Jen wants to know if Marge’s tears and pain affect Teresa at all. “Of course,” Teresa squawks, “I don’t want to see her cry. But you can’t keep going at someone…”

Dolores Catania points out that she and Teresa share a hair trigger temper. They would both want to hit out if someone poured water on them, but considering that’s assault, it’s not a smart move.

Next, we get a snapshot into the lives of our Housewives. Jackie helps Hudson with his homework. Jen chides Olivia to get her dirty feet off the kitchen island. The Gorga boys throw a football back and forth in the yard. And Teresa is taking care of her dad, Nono, after his latest bout of pneumonia. Since that’s what her mom died of, it scares her.

Dolores pops in to see Teresa. They discuss Juicy Joe and the argument she had with him over the phone as she shopped for prom dresses with daughter, Gia. Joe was critical of how much money Teresa spends, but now she points out that she’s paid off his legal fees and the debts they incurred while he was in charge of the family’s finances.

Teresa Giudice brings up the prenup. Dolores wants to know if Juicy gets any money from Teresa if they divorce. She thinks Joe will try to take Teresa for everything she’s worth, instead of kissing her ass for keeping the family afloat all these years. They discuss the fight between Danielle and Marge. Teresa is pissed that Marge issued an ultimatum. She thinks Marge is a big girl who can stand up for herself. But can’t the same be said for Danielle? She kidnapped a man, for heaven’s sake. Who needs backup more: the criminal or the housewife?

They talk about the Danielle/Marge debacle. Melissa thinks Teresa needs to apologize to Margaret. Joe wonders why Teresa can’t see through Danielle. She’s a troublemaker and always has been, in his estimation. Melissa just hopes that nothing horrible happens at her fashion show.

At Marge’s house, she lies in bed while husband, Joe, takes care of her. She’s suffering from whiplash and must keep a warm compress on her neck.

At Jackie’s house, her hubs is outside with the kids, playing soccer. She calls them inside to make yogurt and fruit parfaits. She’s still upset that her dad thought her battle with anorexia was a good thing. Jackie talks to her kids about her disease and gives them a lecture on eating healthy. They barely listen as they shovel yogurt into their faces. She gives them a nutrition quiz, which they pass. Then her husband drops his yogurt parfait on the floor and lecture time is over.

Teresa, excited about her new pool (and pool boy), heads out to find outdoor furniture. Joe Gorga meets her to decide what to buy. Lounge chairs are also on the agenda. But Joe wants to talk about Danielle’s assault on Margaret.

Teresa thinks Danielle was justified after having water thrown on her. Joe rolls his eyes. She equates herself to Danielle. People judge Danielle, and people judge Teresa because she went to prison. But Joe points out that Danielle has a violent track record. She hasn’t turned over a new leaf. She’s still the same old Beverly.

Dolores, Jennifer and Marge have all seen through Danielle. Joe tries to tell Teresa that Danielle treats everyone in her life like shit. Will Teresa have to experience that firsthand before she breaks away from Danielle? Yep! Teresa will continue to give her pal a pass. Okay, then.

Joe tells Teresa to make nice with Margaret at the Envy fashion show. But Teresa is angry. She just might throw a glass of wine in Marge’s face, instead. Nice.

The day of the fashion show has arrived. Melissa, her daughter, Antonia, and the models arrive early. The hero of the day, Frankie Catania, strolls in with his killer abs. Joe Gorga arrives to show his support. And probably get a glimpse of the cute models, let’s be honest. 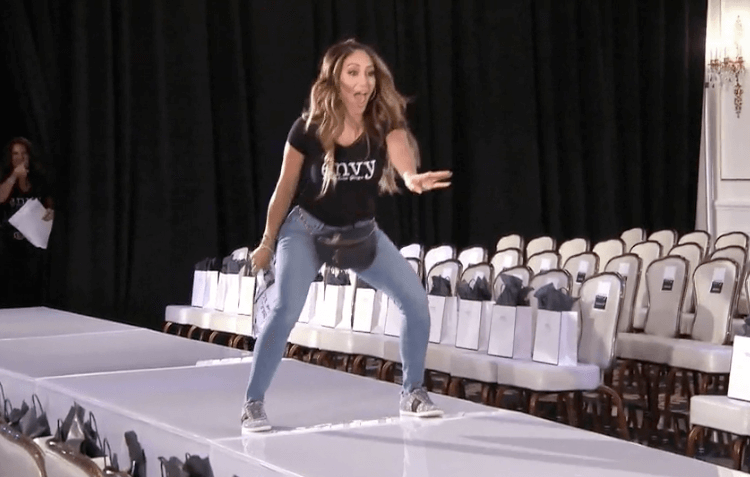 Melissa Gorga is trying to be a role model for her daughter. But as she twerks on the runway, Antonia seems mortified.

Teresa Giudice and her girls get glammed up for the event. Juicy calls and says he couldn’t sleep the night before. Teresa shouts that he must feel bad about being mean to her. He doesn’t believe he said anything wrong, but Teresa disagrees. As he tells her to let go of things that happened 23 years earlier. Gia feeds Teresa a few lines about moving on, which Teresa parrots. See? Isn’t it better when everyone tries to be nice? 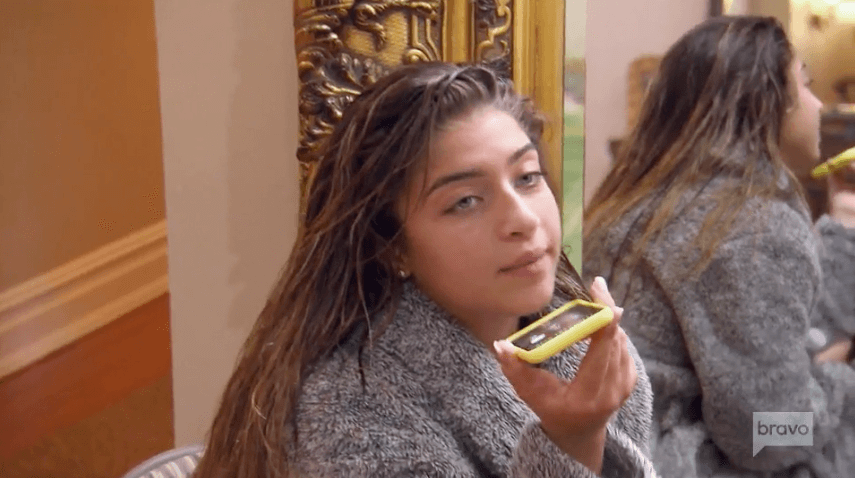 Back at the fashion show, Antonia walks in wearing a little red dress. Melissa tells Joe to look at their daughter’s body. She gets it from her mama! Ugh. Can we not discuss a teenage girl’s attributes, please?

In Paramus, Jennifer parades her outfit for her husband. Frank Catania tries to weasel out of the fashion show, but Dolores won’t let him. Jackie is happy to get out of the house and away from the kids for the night. Marge tries to decide what to wear. And Teresa details the struggle between Margaret and Danielle, she asks Gia for advice.

Time for the Envy fashion show. I know, the excitement is…well, excitement might be the wrong word. But here we are, so let’s do this!

Jen and Bill arrive first, followed by Dolores and Frank. Where is Dolores’s boyfriend, Dr. David? At sniper school, of course. Because supporting Dolores never seems to be on his radar. Marge and Joe come in next. Jackie and Evan stroll in soon after. They all discuss the Danielle situation. Marge says she went to the chiropractor and tells them about the whiplash diagnosis.

Marge feels that she’s proven her loyalty to Teresa and hasn’t received the same level of support. Jackie urges Marge to talk to Teresa and get their differences resolved. 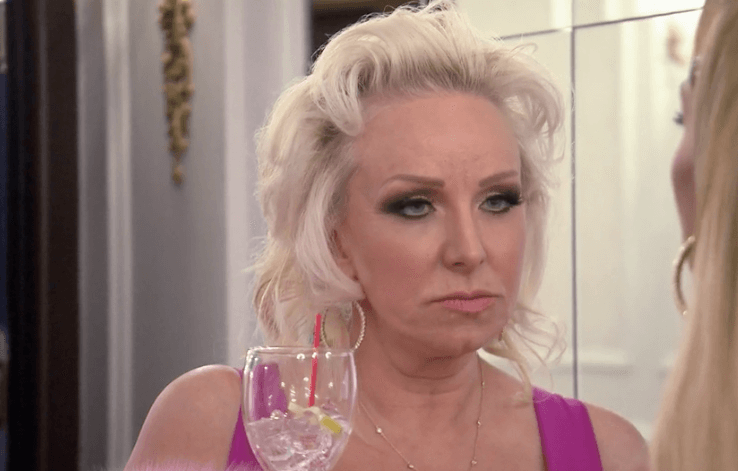 Teresa finally strolls into the pre-show cocktail party. Teresa ignores Marge, and the other women are disappointed. Jen says that Marge wants to know that Teresa feels bad about what happened to her. Teresa insists she isn’t picking sides. Dolores agrees with Jen. Teresa says that what happened to Marge isn’t her fault, and she’s not approaching Margaret. If she wants to talk, Marge can come correct to Teresa.

Dolores leaves. She says there’s no reasoning with Teresa. So, she heads backstage to talk to Melissa. Melissa just wants everything to run smoothly with no arguments. Otherwise, Teresa can expect sprinkle cookies everyday for the next year.

Now, we get dueling scenes between Jackie and Margaret and Teresa and Jen. Jackie cautions Marge that she shouldn’t expect Teresa to have any empathy for the assault she suffered. While at the bar, Jen maintains that Marge isn’t there to fight with Teresa. But Teresa is past all rational thinking. How dare Margaret expect Teresa to come up and talk first?! That’s just outrageous. Jen says Marge thinks Teresa was an embarrassment by siding with crazy Danielle. On the other side of the room, Jackie says this shouldn’t be the end of Marge’s friendship with Teresa. They have a difference of opinion, that’s all. They’ll work it out. Me, I’m not so sure.

Jackie knows Teresa well enough to know that she will never apologize. But Marge refuses to start a conversation with Teresa. And Teresa refuses to open a discussion with Margaret. And we’re at an impasse.

Jen says the water toss wasn’t a big deal compared to the hair pull. So, Teresa picks up a glass of water and tosses it at Jen’s legs. Then she chucks the glass away like it’s a piece of trash. Jen just stands there, dismayed. 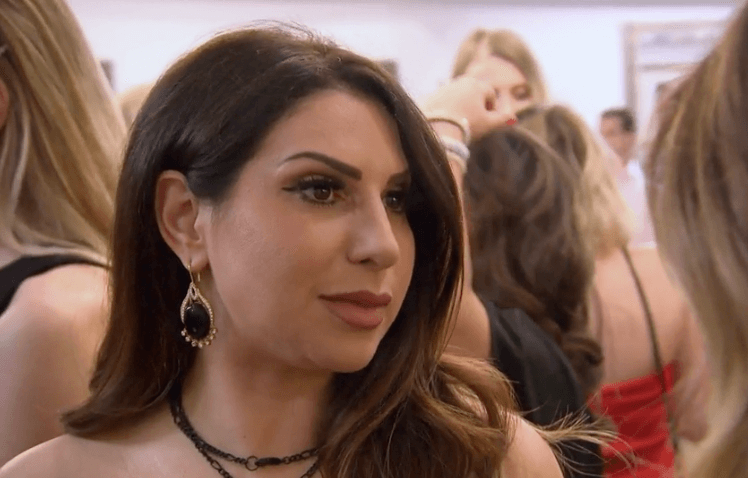 Teresa thinks she’s proven her point, but Jen didn’t reach out and yank Teresa’s hair. Maybe the real point is that these women should practice self-control. Jen doesn’t want to get caught in Teresa’s crosshairs, so she doesn’t complain about the water tossing. 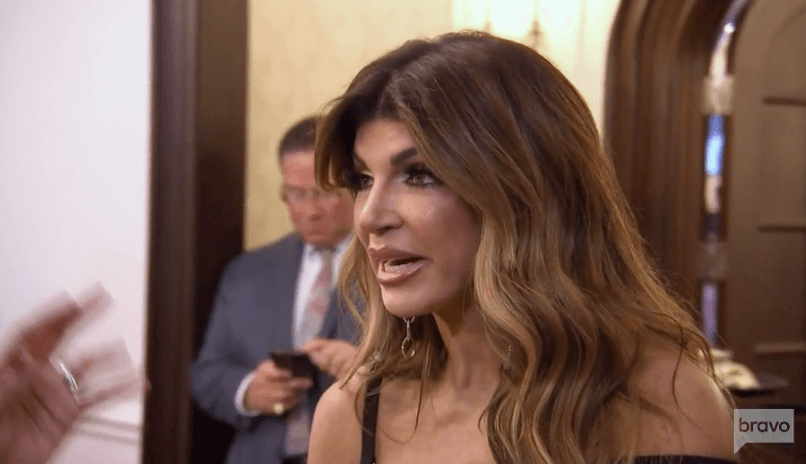 The fashion show is a hit. Frankie is a favorite with the ladies. Melissa pats herself on the back for being a great mom and a lady boss. Joe finally admits he’s proud of his wife, and maybe Antonia will one day take over the boutique.

Backstage, the Housewives congregate. But it’s still a cold war between Marge and Teresa. Marge is over it. She leaves in a huff.

Teresa congratulates Melissa, and Melissa wonders if Teresa really threw water at Jen. Yep. And all because Marge called Teresa an embarrassment. It. Is. On.

And this ends our episode. So, is Teresa wrong to side with Danielle? Was Marge the instigator in the confrontation? Whose side are you on?