Welcome back to another episode of 90 Day Fiance.

This week’s episode of 90 Day Fiance opens with Anna Campisi and Mursel Mistanoglu reeling from the aftermath of his phone call with his family and their demands for him to come home. Mursel maintains that he doesn’t want to leave Anna but that he has to. Anna is disappointed and angry that Mursel is not able to stand up to his family and make his own decisions.

Things go from bad to worse when Anna Campisi’s mother shows up and learns of Mursel’s plans to call off the wedding. Anna confesses that she gave Mursel an ultimatum to tell his family about her sons and that once he did they forbade him from marrying her. According to Charlene, this is just a bunch of BS and she blames Mursel for not being honest from the very start. Hell hath no fury like the mother of a daughter with a broken heart.

In a gut-wrenching moment, Anna’s youngest son Leo admits that he is heartbroken that Mursel plans to return to Turkey. Poor Leo.

Back in Hazelhurst, Georgia, Angela Deem refers to herself as a hot mess after learning that Michael’s visa has been denied. She vows to fight like hell before storming into her attorney’s office unannounced and visibly distraught.

The attorney looks over the letter and quickly points out that the letter states they intend to “recommend a denial” but that it’s not an official denial letter. Angela seems visibly relieved after hearing this news. The attorney devises a plan of action to wait to hear back for an official denial and once they do they can file an appeal providing evidence of their phone records demonstrating how much time they spend together on the phone. The attorney goes on to say that the good news is that sixty percent of the time the appeals end in granting the visa. The bad news is that the process of appealing can take up to six more months.

Jasmin Lahtinen is adjusting to her new normal of living with and Blake Abelard’s parents, sans Blake. Blake’s mother, Kerline, plans an afternoon of bonding with Jasmin while teaching her to cook Carribean food. Unfortunately, Carribean food is not as healthy as Jasmin would prefer and her efforts in the kitchen are lackluster for sure. After Kerline asks what Jasmin’s plans are once she is able to get a job, Jasmin admits that she hasn’t really thought about what her next steps are. Kerline doesn’t seem too pleased with that answer.

Time keeps ticking for Tania Maduro and Syngin Colchester as she is still living it up in Costa Rica solo. Syngin visits Tania’s sister, Tiana, and vents his frustrations about Tania’s lack of communication while she’s away. He wonders out loud if she is getting cold feet and even asks Tiana if Tania has ever cheated on any of her previous boyfriends. Syngin maintains that if he were to find out that Tania was unfaithful that he would pack his bags and leave.

Back at the apartment, Anny and Robin share a warm embrace after meeting for the first time. Robin’s first impression of Anny is that Bryson adores her and that at least he would be heartbroken if things don’t work out…

Anny confesses to Robin that it’s been quite an adjustment moving to Florida and suddenly not being able to work or have any of her own money. She then goes on to air out her grievances with Robert taking her to a second-hand clothing store to buy clothes and his unwillingness to upgrade their one-bedroom apartment to something much more luxurious. Robin seems stunned by Anny’s statements before asking Anny if she realizes that Robert is poor. Robert doesn’t seem too happy being labeled as poor, but admits that he’s not rich either. According to Anny, however, he was singing a much different tune when she was still in the Dominican, vowing that he would take care of her and give her money every week.

Robin tries to explain to Anny that it may take time for Robert to establish his finances. Later she confesses that Anny’s expectations for Robert are a little too high for a working-class single father. 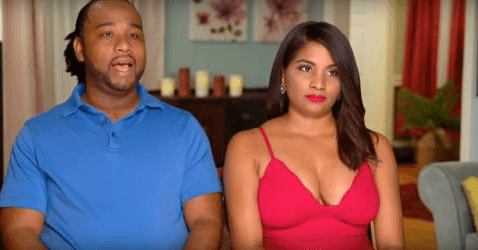 Anny then drops a bombshell explaining that Robert must give her more sex, exclaiming that she wants sex every day, sometimes even three times a day. Poor Robin’s eyeballs look like they’re about to pop right out of her eye sockets and Robert seems deeply embarrassed to be having this discussion in front of his baby sister. The second-hand embarrassment during this scene is REAL, friends.

Meanwhile, in Kyiv, Natalie Mordovtseva and Michael Jessen are still dealing with the aftermath of their argument about religion and opposing values. Mike gets up early and heads to the embassy to check in on the status of Natalie’s visa while she sleeps in.

Forty minutes later a visibly defeated Mike exits the embassy with no new information as the information was deemed “classified.” Mike seems genuinely confused as to what could be causing such a delay and worries that there is an underlying cause that he is not aware of.

Later the two discuss their frustrations with the visa process over coffee. Mike eventually works up the courage to ask Natalie if she has any idea as to why there would be a delay. Natalie takes serious offense after Michael directly asks her if she has ever applied for a K1 Visa with someone else. YIKES.

While Emily and the baby sleep, Sasha spends quality time getting to know Emily’s sister and mother. After watching Sasha uncork a bottle of wine with ease, Betsy, Emily’s sister, asks Sasha if he used to be a big drinker and it appears that Sasha’s not too keen on being asked such questions.

The conversation turns to the wedding and things get real weird after Sasha makes the comment that Emily is the first fiancee that his parents have loved. Betsy wastes no time getting down to the nitty-gritty and asking Sasha if he was married before impregnating the last two women. Sasha confesses that he was not and Betsy calls him out regarding the pattern of his behavior. Sasha vows that Emily is different from the last two women he married, claiming that the love,  respect and trust between the two of them are very strong. Unfortunately, Betsy doesn’t seem so sure…

Anna is now faced with the difficult task of explaining to her oldest son Joey of Mursel’s plans to go back to Turkey. Joey’s disdain for Mursel is apparent but she knows that he will be upset and sad for her. After picking him up from band practice, she goes on to share the news. Joey seems just as confused as Anna that a 38-year-old man is allowing his parents to control him but admits that he tried to tell her this wasn’t a good idea from the very beginning.

Tania appears to be enjoying a carefree night out on the town in Costa Rica with her girlfriends while Syngin sits back at her home all by his lonesome. Syngin FaceTimes Tania while she and her handsome dance partner are tearing it up out on the dance floor together. Instead of answering the call privately she chooses to take it upon herself to introduce Syngin to her dance partner via FaceTime. Okay, I’m just gonna go ahead and say it. TANIA IS THE WORST. It’s almost as if she gets some sort of sick pleasure out of making Syngin jealous. Insecure much, Tania???

Right off the bat, Syngin observes that Tania is quite inebriated and questions her whereabouts and if she’s safe. She quickly tells him that she just wants to get off the phone and back to dancing and he asks just one thing of her- that she promises to call him when she gets home to let him know that she’s safe. Unfortunately, drunk Tania can’t be bothered with that and makes no promises. Wow… just wow.

Angela takes her vow to “fight like hell” quite seriously and resolves to fly to Nigeria to figure out what she can do to help expedite the Visa process. But first: she must find her passport. Shaking my head… After accusing all of her grandchildren and her daughter of misplacing it, she eventually finds it in her suitcase. Angela chalks it up to some Voodoo trying to work against her and Michael’s starcrossed love.

Meanwhile, Michael meets with an immigration attorney to discuss his options to get the visa approved. Unfortunately for him, the attorney doesn’t have a lot of promising information for him. According to the attorney, she does not advise him to go forward with an appeal. Instead, she advises him and Angela to get married in Nigeria. Unfortunately, this is something that Angela has insisted she will not do.

Anny and Robin continue to bond while shopping for Anny’s wedding dress together. When Anny is asked about the dress budget, Robin reminds Anny that she should be realistic when it comes to the price. Robin digs further and Anny confesses that Robert told her she should remain within the $400 price range. Fortunately for Anny, the sales lady works her magic and finds a beautiful dress that fits her like a glove.

In a rare moment, Anny shows a more vulnerable and softer side of herself tearing up and getting emotional about her mother missing such a special moment in her life. She does remain extremely grateful, however, that Robin is there to share the occasion with her. Maybe she and Robin should get married instead? Just a thought.

Tania and Syngin’s argument from the previous night spills over to the next morning and Syngin is frustrated by the lack of effort on Tania’s part. Tania seems adamant that this is just the way she is and he needs to get over it. So much for compromise…

Sasha continues to ruffle Betsy’s feathers when he takes it upon himself to throw away her junk food, stating it belongs in the garbage. His reasoning is now Emily’s starting to eat junk food too and he doesn’t want her eating unhealthy food. Betsy accuses Sasha of just shaming Emily for her weight gain. According to Betsy, the answer is to send Sasha on the first flight back to Russia.

Back in Kyiv, Natalie Mordovtseva denies ever applying for a K1 Visa with anyone else before storming away from the table. Michael confesses he had no intention of hurting her but maintains it was necessary to ask her these questions.

Natalie eventually returns to the table but later confesses that she is having second thoughts about Michael and his apparent lack of trust in her.

Next week on 90 Day Fiance, time continues to tick away for these star crossed lovers…