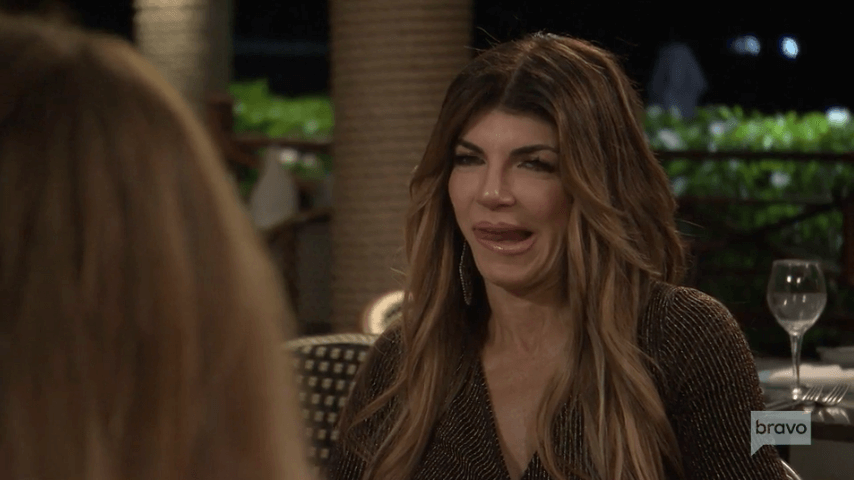 Welcome back to a pre-Thanksgiving episode of the The Real Housewives of New Jersey. Once again, we start in Paramus with Jennifer Ayden and her, um, rambunctious children. She’s expecting her frenemy, Jackie Goldschneider and her kids to arrive for a playdate. Since Jennifer apologized for impersonating Jackie, they’re finally back to normal.

Jackie Goldschneider’s worried about the upcoming girls’ trip to Jamaica. Will Teresa Giudice be cool or will she go in on Jackie the first chance she gets? Jackie feels like she and Teresa buried the hatchet after last season, but as we see during flashbacks of the reunion, Tre now despises Jackie. What’s that about? Could be that Jackie told the women she believes Teresa is cheating on Juicy Joe. 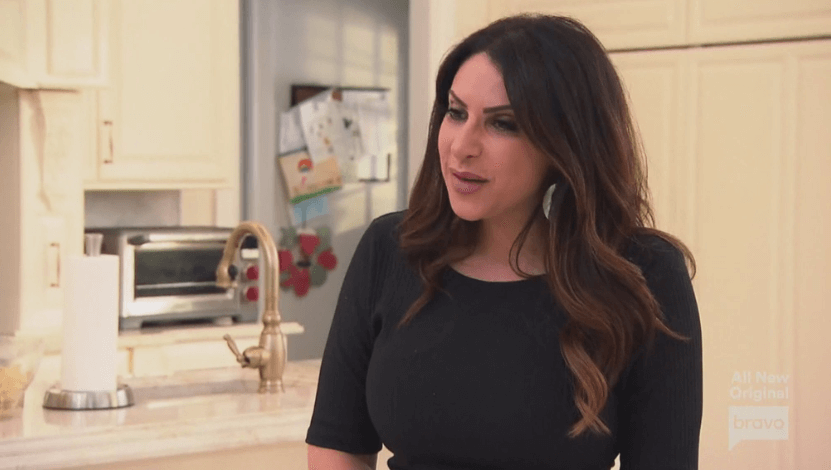 Jackie, a former chunky girl, is highly sensitive. She doesn’t want to be bullied by Teresa in the same way she was bullied in high school. But Jennifer doesn’t feel Teresa has been mean to Jackie. Mainly because Jennifer is too busy kissing Teresa’s ass to notice.

When the kids come upstairs from playing, Jen admires the shoes Jackie’s daughter is wearing. They’re quite blingtastic. Jackie says they’re all about the shoes in her family. Jen’s son, not to be outdone, pulls a hundred-dollar bill from his pocket. He’s all about the Benjamins, baby. Jen doesn’t even know how he got his hands on the cash.

Over at Margaret Josephs’ house, she’s wearing sunglasses to hide her lack of makeup for a visit from her real estate agent. Marge wants to sell the land next door to her house. After settling a lawsuit, she needs the cash. Although she was sued for 12 million bucks, she only wound up paying 300k. Even so, she had to declare bankruptcy and has a lien on her property. She can’t unload that piece of land fast enough. 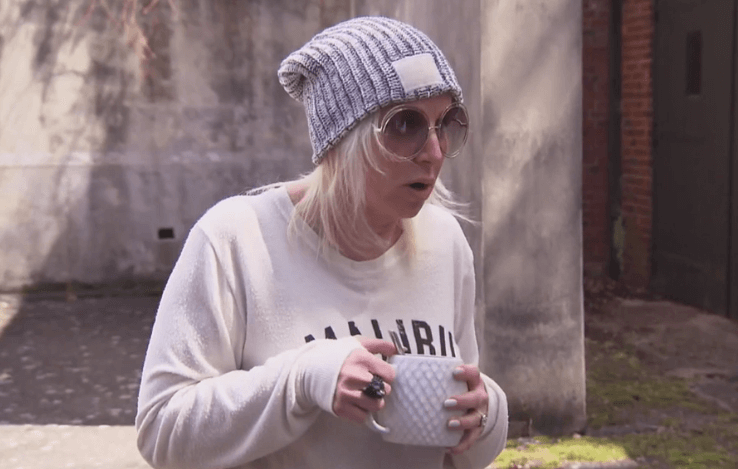 Melissa and Joe Gorga head to the doctor’s office to get a clear picture of their chances at fertility. Melissa’s kids are getting older, and she has a case of baby fever. But since she tied her tubes, she needs in vitro. Are her eggs still viable? Boy, I wish I cared. Anyway, Joe tries to take a video of her internal ultrasound. Because nothing is sexier than that. While Melissa gets blood work, Joe locks himself in the porno room and squeezes out a cup full of poison. Eek! And I thought watching the Housewives get their vadges rejuvenated was awkward.

Dolores Catania meets up with Jen to shop for the trip. Teresa pops in late and the ladies talk about Jamaica. Jen is taking them to the island to celebrate her birthday. But that’s not important, because Teresa has other things she needs to talk about. Like Juicy Joe’s incarceration and how she really, really, really hates Jackie.

Of course, Jennifer spills the tea about her conversation with Jackie, how Jackie thinks Teresa is a bully. Teresa doesn’t like hearing that. And no one wants to room with Jackie. Or Margaret for that matter. Teresa thinks they’ll have a great time on the trip — as long as Jackie keeps her big mouth shut.

Over at Jackie’s, she’s getting ready for her sons’ birthday party. To give her props, she doesn’t spend a fortune trying to impress the other parents. She thinks kids need games, friends, and pizza to have a good time. And goody bags? Jackie didn’t even bother to take the gifts out of the Amazon box. She just lets the kids dig in there and scoop out toys to take home. Who is she, Santa?

Melissa and her boys arrive at the party to play basketball with the other kids. Then Jennifer comes with her kids. But Jen’s daughter has no interest in basketball or the outdoors or the heat. (A girl after my own heart!) Jennifer thinks the party is a snooze. Kids playing outside with their friends? Pffft! She knows her party would be more popular, what with ice cream trucks and water slides. Side note: I think it’s pretty pathetic that Jen’s ego is so tied up in being the “fun” mom. Get a grip, woman! 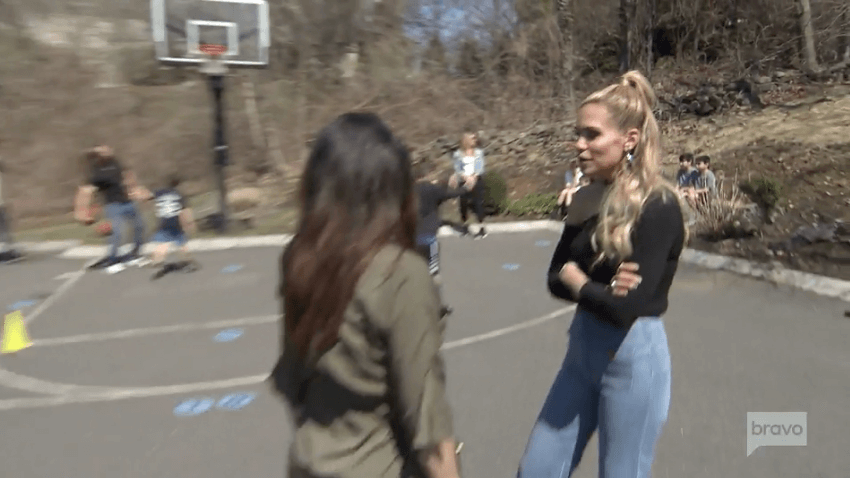 Jackie Goldschneider learns that Frank, Dolores’s ex, thinks she and Teresa will never get along because Jackie’s a lawyer who always has to have the last word. Since Frank was a lawyer, too, he’s calling it like he sees it. Jackie’s upset that Dolores didn’t stick up for her, but she’s not about to start having beef with Dolores. She’s already on the outs with Teresa. That’s enough drama, thank you! The girls give Jackie a piece of advice: zip her lip on the trip. I don’t think that’s likely to happen, do you? 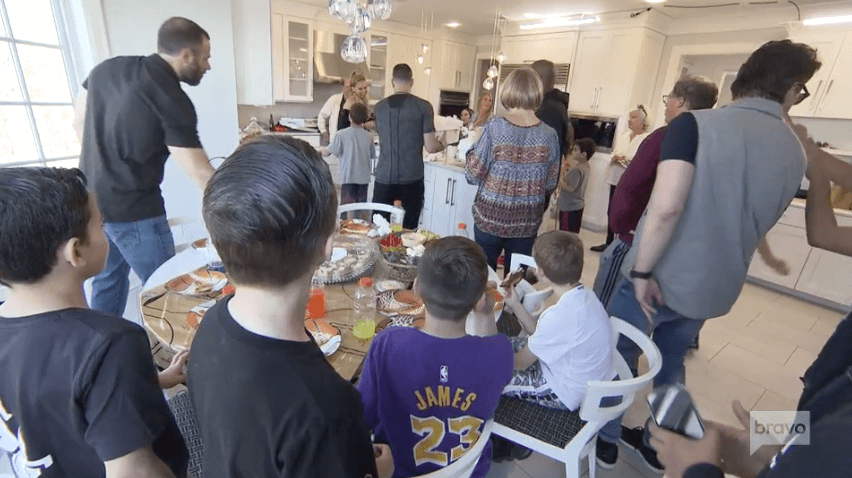 We get our obligatory packing montage. Jackie uses ziplock bags for her swimsuits. And Margaret Josephs needs a special bag for all her hairpieces. Jennifer plans on impersonating all the women, including Jackie. Won’t that be fun? Well…

Dolores Catania tries to call her boyfriend, David, as she’s packing, but she gets sent to voicemail. Frank knows his ex and can tell she’s not happy that David isn’t more available. But if he’s not more invested than this after two years, he probably never will be.

The ladies make it to Jamaica and hop on a van that zips them around the island. On the ride to the resort, Jennifer breaks down the room arrangements. Margaret and Jackie are being ostracized from the other women, so they get to be bunkmates.

Jennifer, Teresa, Dolores, and Melissa have sushi waiting for them at their waterside villa. They have their own private pool and an outdoor dining area. Margaret Josephs and Jackie have to share a room. And it doesn’t come with the same amenities, so they’re feeling a little left out. The fours roomies discuss the fact that Jackie isn’t eating. She suffered an eating disorder in the past. Is it kicking in again? They also note how regimented she is. Jackie doesn’t even let her parents come over without calling first. (That’s called boundaries, ladies.) But Dolores finds it strange and that’s why she and Jackie aren’t friends. They’re just too different.

Before dinner, the women get decked out for a rum tasting. Jackie and Marge have to schlep over to the villa. They get lost on the way, and Marge isn’t pleased. Once they arrive, she and Jackie slap on smiles, but Marge makes a few jokes about how far apart the rooms are. Jennifer gets bent at Marge’s digs, but she can’t get too offended. Remember this is the woman couldn’t stop slamming Oklahoma or her hostess last season, so Jen needs to suck it up. 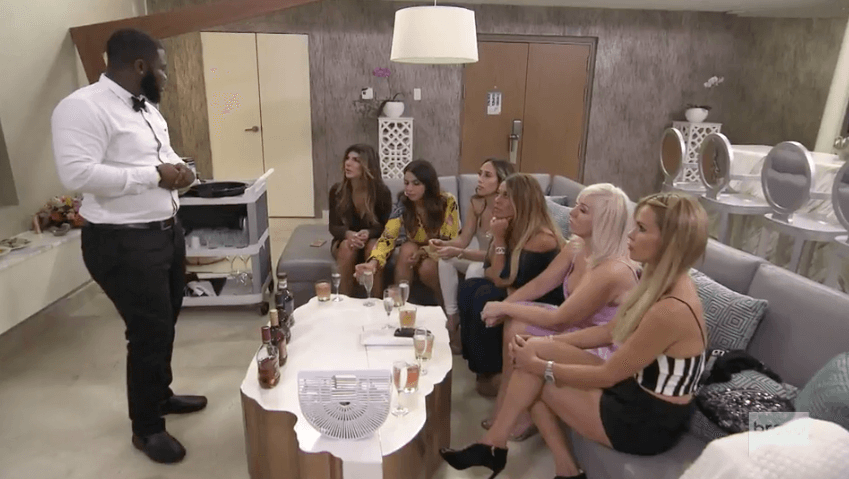 First, the women taste a young rum. Marge, who isn’t a drinker, gives it a try. Then they sample rum, ginger beer, and bitters mixed together. Cooking rum comes next, followed by a daiquiri. And finally, they sip an aged rum. It’s 21 years old, and when Marge makes a joke about jailbait to Teresa (referring to her boytoy), it’s not well-received. Still, Teresa keeps her cool. Marge backpedals fast and tries to pry her foot from her mouth. They’re all wondering if Teresa even understood the snarky comment in the first place. Melissa thinks Teresa will explode later, after the joke has time to rattle around in her empty head for a while.

At dinner, the women talk about plans for the next day. Marge wants to ride horses in the ocean, but Teresa, Melissa, and Dolores have been there, done that. So, Jennifer is a good sport and says she’ll go along with Marge and Jackie. The others will hang out at the beach.

They toast Jennifer’s birthday with Bob Marley shots, but while colorful, they’re too strong. And they also raise a glass to Jackie’s news. Her article has been accepted into Good Housekeeping. When she found out she was having twin boys, Jackie had an internal meltdown because she wanted girls and has now penned an essay about it.

The women talk about “gender disappointment” and Melissa says she might be doing in vitro soon. The others look at her with shock. Marge thinks babies make you feel youthful, and since Melissa just turned 40, she’s having a mid-life crisis.

Dolores says that David has 4 kids. Jackie wanted to meet him at Melissa’s birthday party, but as always, David had to work. She also wonders why Dolores and David aren’t engaged. Dolores shuts that down, but Melissa calls bullshit. Dolores has been talking about getting a commitment from David for years. Jennifer says Dolores comes across as a pushover. 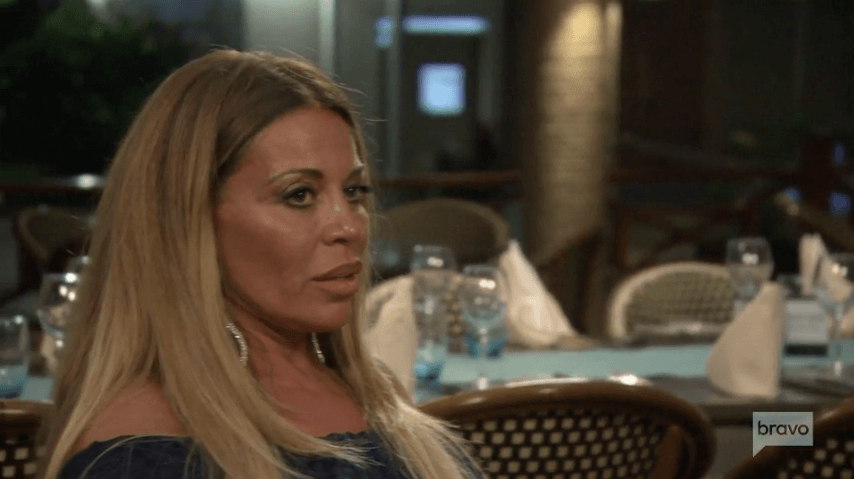 Jackie hopes David will like her, because Frank isn’t vibing on Jackie. At all. Dolores denies it. But Jackie took offense at Frank’s assessment that she needs to have the last word. And she’s really upset that Dolores didn’t stick up for her. This is where Jennifer jumps in and says, “Hey, Dolores doesn’t even consider you a friend.” Dolores gives Jen a side eye as Jackie appears hurt by the news. Teresa looks on and smirks. 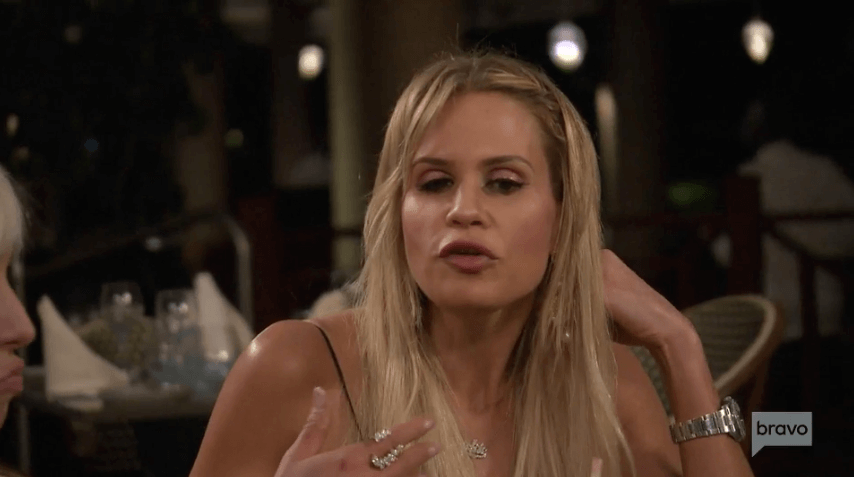 Jackie likes Dolores and considered her a pal. But now she just feels foolish. Dolores says the comment was taken out of context and points out that they don’t call or text or stop by to see each other. Dolores also tells Jackie she’s thin-skinned. Teresa piles on and says Jackie takes it all so personally. Like the video of Jennifer mocking Jackie. It was all in fun. Of course, Teresa pulls out the comment Jackie made last season, telling Teresa if she could control her husband, they wouldn’t have gone to prison. Talk about thin-skinned.

Teresa Giudice blames her grudge on her difficult life, but Jackie calmly points out that if Teresa has a bad day, she gets to slam Jackie left and right. But she expects Jackie not to retaliate. The world doesn’t work like that. And as Jackie comments about this, the camera pans on her plate of untouched food. Yep, this is going to be an ongoing storyline.

Once again, Jackie Goldschneider offers Teresa an olive branch. They should both stop saying hurtful things about each other. Teresa agrees, but she practically rolls her eyes as Jackie speaks. How many times are we going to have to endure Teresa holding onto anger over one comment that Jackie uttered a year ago? How long?!

And that’s where we leave these ladies — in Jamaica, where there’s a calm before the shit storm. So, do you think Teresa will be able to start over with Jackie? Will Melissa and Joe try for baby number 4? Thoughts on the season so far?