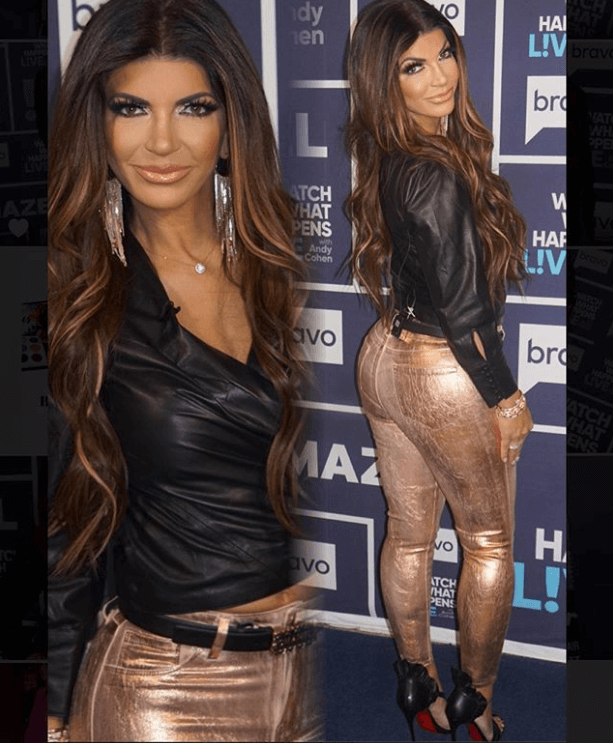 Joe wants that ole thang back! Joe Giudice flirted with his estranged wife, Teresa Giudice on Instagram this week fueling speculation that there’s hope for the couple amid their marriage problems.

“Always a good time at the @bravowwhl” Teresa, 47, captioned a photo of herself on set of Watch What Happens Live With Andy Cohen. Teresa Giudice star dressed in skin-tight, metallic jeans and a black leather blouse.

The couple have been married for almost 20 years and share four daughters — Gia, 18, Gabriella, 15, Milania, 14, and Audriana, 10. Earlier this month, Teresa and her daughters visited Joe in Italy while he awaits the verdict in his deportation case. He then spent seven months in ICE custody before he flew back to his native Italy in October.

Bravo cameras filmed the family’s reunion in Italy and word is Joe and Teresa Giudice had a spark and reconcilation is a possibility.

The Giudice daughters plan to spend Christmas in Italy with their dad but Teresa won’t visit again until this summer.

“Probably this summer?” she told Cohen on the Wednesday, November 20, episode of WWHL. “The girls are going to go back. They wanted to go back for Thanksgiving, but Joe’s just getting his passport so we don’t know. We were gonna meet in the Bahamas, but he’s gonna get his passport right around that time.”

Joe confirmed that his daughters will spend Christmas in Italy with him in an Instagram post on Thursday, November 21.

“Can’t wait till my girls come back to show them Salerno during Christmas …” he captioned a video showcasing Christmas lights in Italy.

Their four daughters have been struggling with their father’s absence. “I thought the girls would be fine when we came back from Italy, but they’re really missing Joe still. I try to compensate,” Teresa Giudice said during BravoCon on November 16. “I jump over hoops for them because of everything that we’re going through. But they are amazing kids.”