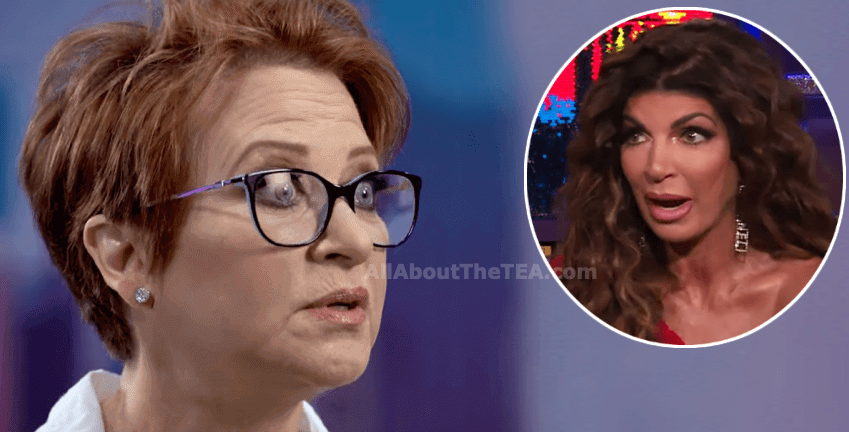 Teresa Giudice and Joe Giudice’s first interview together following his release from ICE custody has caused a ton of drama!

The couple’s marriage is currently up in the air since Joe Giudice was deported to Italy after he completed his 41-month prison sentence for mail, wire, and bankruptcy fraud.

Teresa reacted to the video, asserting that Caroline may have called the feds, saying, “How could she predict that? Could she have anything to do with what happened to Joe and I? Is she a rat?”

On Tuesday, Caroline Manzo, 58, responded to Teresa Giudice’s allegations on her son’s podcast, Dear Albie — “I left [Housewives] five years ago. Within those five years, my name has come up numerous times, in positive ways and negative ways as well. I don’t respond to any of it, ’cause that was then and this is now. I live a very quiet life, as my Instagram will show, and I’m a normal person, a normal housewife. I don’t live by what people think of me. However, there comes a point in everyone’s life when enough is enough,” she said.

Caroline Manzo emphasized, “I’m at that point with her because I have heard over the years that she has slandered me numerous times on her live shows, numerous times to people that just go up to her on the street, in the press, on reunions. This is not the first time she’s made this claim. Those are big words. Those are very big words. So once in a while, you gotta take the bully, pull ’em up by the shirt, pull ’em up to your face and say, ‘This is the reality. This is life. I am going to clear things up for you.’ And that’s what I’m doing.”

As for Teresa’s claims Caroline Manzo called them “just ridiculous.”

“She has a narcissistic personality … I get it. I see through her,” she said, explaining how she was able to predict the Giudices’ fate all those years ago. “She has no moral compass. She really doesn’t. She has said things to people that are completely fabricated.”
She also detailed her reaction to “crooked life” dig.

“My initial thing was, ‘What the F is she … what?’ ” Manzo said. “And then you have to laugh at somebody like that, because she is clearly grasping at straws. What’s my crooked life? I have a husband that has been busting his ass for the past 40 years, working 16-hour days six days at week at almost 60 years old. We just paid off our mortgage, congratulations to us. And guess what? We did it the old-fashion way, with a 20-year loan, and by blood, sweat and tears we paid it off. … She’s right. We couldn’t be more opposite. And that pleases me. So the irony of that statement is not lost on me, and I think she’s grasping at straws, and I think she’s delusional, and I think she’s trying to throw mud and hoping it sticks on any which wall that will catch it, but it’s not gonna work.”
As for the “rat” label? “Did I miss a Godfather script somewhere? Who speaks like that?” Manzo joked.
“It’s not even worth me responding to, of course not,” she said.

“First of all, I had no knowledge of anything they’ve ever done in their life, you know? At the time, Teresa had an abundance of legal issues and it was all over the press, and the writing was on the wall that something was going to happen because the indictment was so big. So you don’t need to be a rocket scientist to figure it out.”

Andy Cohen has since admitted that he does regret not coming to Caroline Manzo’s defense during the interview.