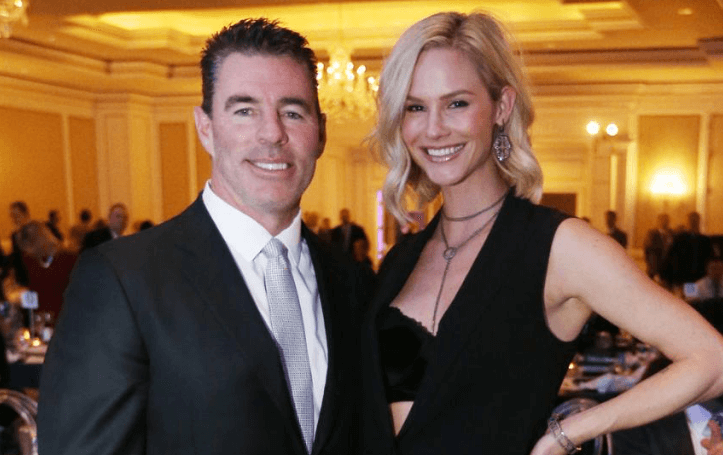 Meghan Edmonds and her husband Jim are receiving marriage counseling following his affair with the baseball madame.

Meghan Edmonds has provided Bravo’s Daily Dish an update on the status of couple’s marriage.

“We’re just still working it day by day. I think after such a breach of trust, it’s so hard to rebuild from there, especially [with] so many distractions, like our son’s health problems and two other little babies [daughter Aspen and Hart’s twin brother, Hayes], as well. And so to focus on the two of us as a couple, is really hard,” she told The Daily Dish in an exclusive interview on Wednesday (October 24).

“Today’s actually our five-year [wedding] anniversary — and so we, he’s inside at Goodwill [and] we’re like, looking for Halloween costumes. And then we’re going to counseling. I think that’s almost a date for us because we have to talk about us; we have to communicate about things that don’t involve [other topics].”

Meghan Edmonds says the decision to stay in her marriage after Jim’s infidelity was not easy: “It’s so easy to just say ‘no,’ it’s harder to work through.”

“I think people can change — and people screw up and people can change. I’m in no way taking responsibility from him or accountability — and if we were just dating, he would be long gone,” she said. “But we built a life together and there are so many lives that would be affected. I’m hurt right now and our life is massively affected, but if we were to split just because of his indiscretion then there’s multiple other people who are affected, as well. So I owe it to not only myself and the commitment I made to my marriage to work on it, but I owe it to my children.”

According to Meghan Edmonds, Jim has been working to repair the damage that he’s done in the marriage.

“I think going to therapy is huge because I think a lot of men don’t like that. So that’s been really big for me,” she said. “And then, like little things to work on [as well]. Let’s say, I like things in the calendar and he doesn’t, [him] trying to put things in the calendar more. That’s not going to make or break a marriage, but little things add [up], like small acts of kindness.”

Comments
EXCLUSIVE: Braunwyn Windham-Burke and Mom Dr. Deb NOT Feuding — Find Out Why They Unfollowed Each Other!
Jim Edmonds Files For Divorce From Meghan Edmonds Exactly 5 Years After Marrying Amid Cheating Scandal!
To Top