Viewers recently watched 90 Day Fiance: Before the 90 Days couple, Avery Mills and Omar Albakkour marry in a quickie Muslim ceremony — but did they really tie a legal knot? 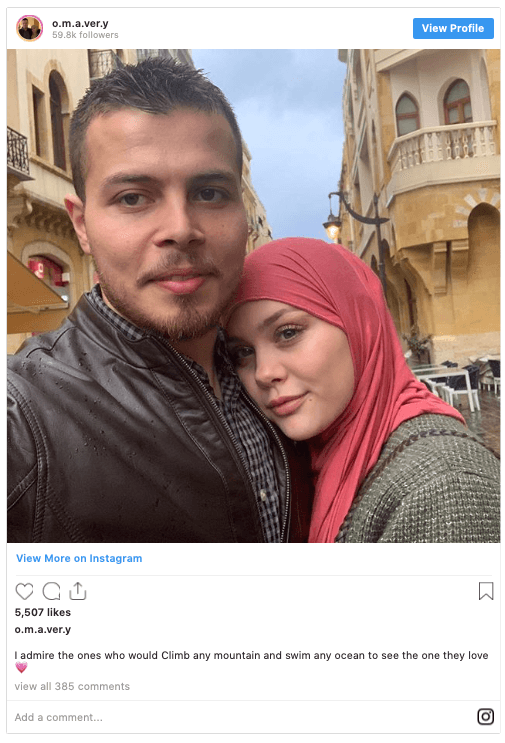 The TLC bride shared a screenshot of an exchange between two Facebook fans, one who claimed to live in the same town and attend the same mosque as Avery Mills. The writer also claimed that Avery returned from Lebanon in December 2018 — as a legally single woman.

She slammed the claim as bogus — and insisted that the couple filmed the ceremony segment in February. “This is all sooo wrong. TBH the person that posted this doesn’t know me at all, it was filmed in February and I converted before I met Omar,” Avery wrote, defending the reality romance. “Why the hell would I be on a MUSLIM dating app wearing a hijab on my Muzmatch profile if I wasn’t Muslim? TBH you guys just want attention by using my name. It must suck seeing a 20 year old MUSLIM girl happier and doing better than you.”

A Reddit user, who claimed to know Avery Mills, made a similar claim — that the scenes were filmed in November 2018, and Avery had not seen Omar since December 2018. A fan brought the post to Avery’s attention — but she appeared to laugh off the rerun rumor. “The show was filmed in February so I obviously have seen him since November,” Avery wrote.

Avery didn’t hold back when blasting her critics — but never explicitly confirmed that she legally married her Syrian beau.

Do you believe that Avery and Omar tied a legal knot? Watch 90 Day Fiance: Before the 90 Days, Sunday night at 8 pm, ET, on TLC.